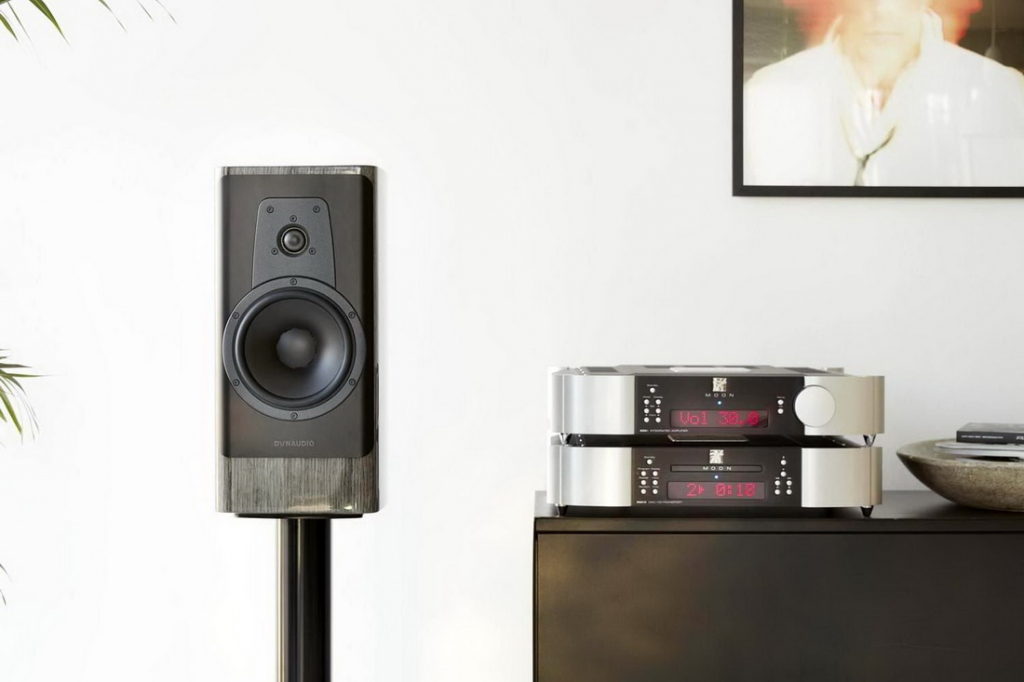 The Contour loudspeaker family has been completely redesigned using advanced acoustic technologies derived from the flagship Confidence loudspeaker series. Among the many improvements, all models feature the new Esotar 2i tweeter with a clever internal Hexis dome to suppress resonances, as well as a larger rear chamber.

This reduced the level of distortion and obtained a smoother frequency response. Overall, the designers have managed to improve the sound quality through improved tweeter and woofers, increased internal damping, a new crossover and redesigned cabinet.

In the updated Contour series, we have tried to preserve the character of this speaker. But we also wanted to add something new – so our engineers were free to experiment with different materials, designs and technologies. The result is a completely new Contour series. With new speakers, a new crossover, a new front panel (also in solid metal as always in the Contour series) and a new rounded body.

All new Contour models are equipped with new speakers. When developing them, the finite element method was used, which makes it possible to analyze all moving parts and, if possible, improve certain parameters. Thanks to this method, we have added an extra wave on the centering washers to optimize their symmetrical movement.

And this is just one of the many innovations in the speakers: a new magnet system, a thinner magnesium silicate polymer cone, an increased winding height … even the glue between the cone and voice coil – and that’s new! These new technologies combine to maintain the classic Contour sound (and especially the refined mids) while significantly improving bass response.

The front panel of the Contour has also been redesigned. In the previous version, it was made from a solid steel billet with straight edges. The front panel is now made of aluminum with rounded edges. Thus, with less weight, a better suppression of unwanted vibrations is achieved.

You will undoubtedly notice the rounded edges. This is by no means for the sake of design (although it looks elegant). Rounded shapes increase structural rigidity and reduce vibration and resonance. Like all Dynaudio speakers, the Contour is crafted to the highest level of craftsmanship. And, of course, manually. Manufacturing of one case takes more than two weeks: sawing, varnishing, cleaning, polishing. With four exquisite finishes, Contour is the perfect fit for any décor.

The Dynaudio Contour 20i speaker system is equipped with a proprietary Esotar 2i tweeter, as well as a new 180 mm mid / bass driver with an increased travel system. The tweeter uses ferromagnetic fluid for cooling and damping, withstands high power input and produces a clear, transparent and detailed RF spectrum.

The one-piece driver cone material uses MSP magnesium silicate polymer, which is excellent in rigidity and damping, and has been used by Dynaudio for over thirty years. The thickness of the cone is variable, which avoids unwanted diaphragm bends and produces a more controlled sound. The speaker designers used the FEM (Finite Element Method) method, which significantly improved the design. In particular, a specially optimized “spider” was used and a well-ventilated system consisting of two ferrite magnets was installed. The radiator also uses a lightweight coil with aluminum wire, which has a large diameter and increased winding height.

In the Dynaudio Contour 20i loudspeakers, the crossover uses second-order filters and has a new wiring diagram. The circuits are equipped with audiophile Mundorf capacitors and other high quality components. The body of the Dynaudio Contour 20i looks elegant and sleek, thanks in no small part to the rounded ribs and gently curved sides, which minimize the likelihood of internal standing waves and improve the anti-diffraction properties of the speakers. The front of the speaker is adorned with a striking thick extruded aluminum plate on which the speakers are mounted. Thanks to this solution, it is possible to reduce resonances and vibrations. The body is made of MDF and has a multi-layer varnish coating. Inside there are special plates and spacers that provide the proper level of damping.

The most important factor when listening to any Dynaudio speaker systems is the amplifier; with devices without a solid current headroom, the monitors will always sound insipid and sluggish. Yes, the new generation of the Contour series has become a little less demanding on the amplifying part, but it’s still useless to approach it with a low-power device. Fortunately, we had the integral, but extremely capable Rotel Michi X3 at our disposal (we will tell you more about it in a separate article). He was able to get all the sound out of the monitors without a trace. However, the electronics of the German AVM also performed well.

The first thing that attracts attention is the extraordinary breadth of the gesture of new “contours”, their macrodynamics are simply wonderful. Whether it’s the Led Zeppelin drums or the Carmina Burana fortissimo, the monitors played them out easily and freely, with that little thrust and a hint of deep bass that allows the imagination to easily complete both the kick drum and the Bonzo live drum kit. The further I went through the test program in search of phonograms that would cause difficulties for the Dynaudio Contour 20i, the more often I lingered on this or that fragment just to listen to it to the end. Folk-rock performed by Pentangle was unexpectedly heartfelt, the traditionally high-quality recordings of Jacques Loussier’s trio, as always, were magnificent. Again, as usual, the monitors showed their dislike for poorly recorded tracks, turning them furiously outward and clearly showing the listener all their compressed “insides”. Small classical compositions pleased not only with the clean timbres of live instruments, but also with the correct arrangement of the soloists in space, the depth and volume of the stage with the Michi X3 system were simply excellent. When switching to AVM EVOLUTION A 3.2, the timbres became a little lighter, and the images of the performers moved a little closer to the front line, but subjectively, the system began to play a little faster, although it lost its monumentality and solidity. If we compare the Dynaudio Contour 20i in absentia with the anniversary Heritage Special monitors, then their great precision and delicacy speaks in favor of the latter, while the “contours” impress with their excellent dynamics. Which, we will not tire of emphasizing, will appear only in tandem with a decent amplifier.

Bluesound Pulse: The soundbar made for audiophiles