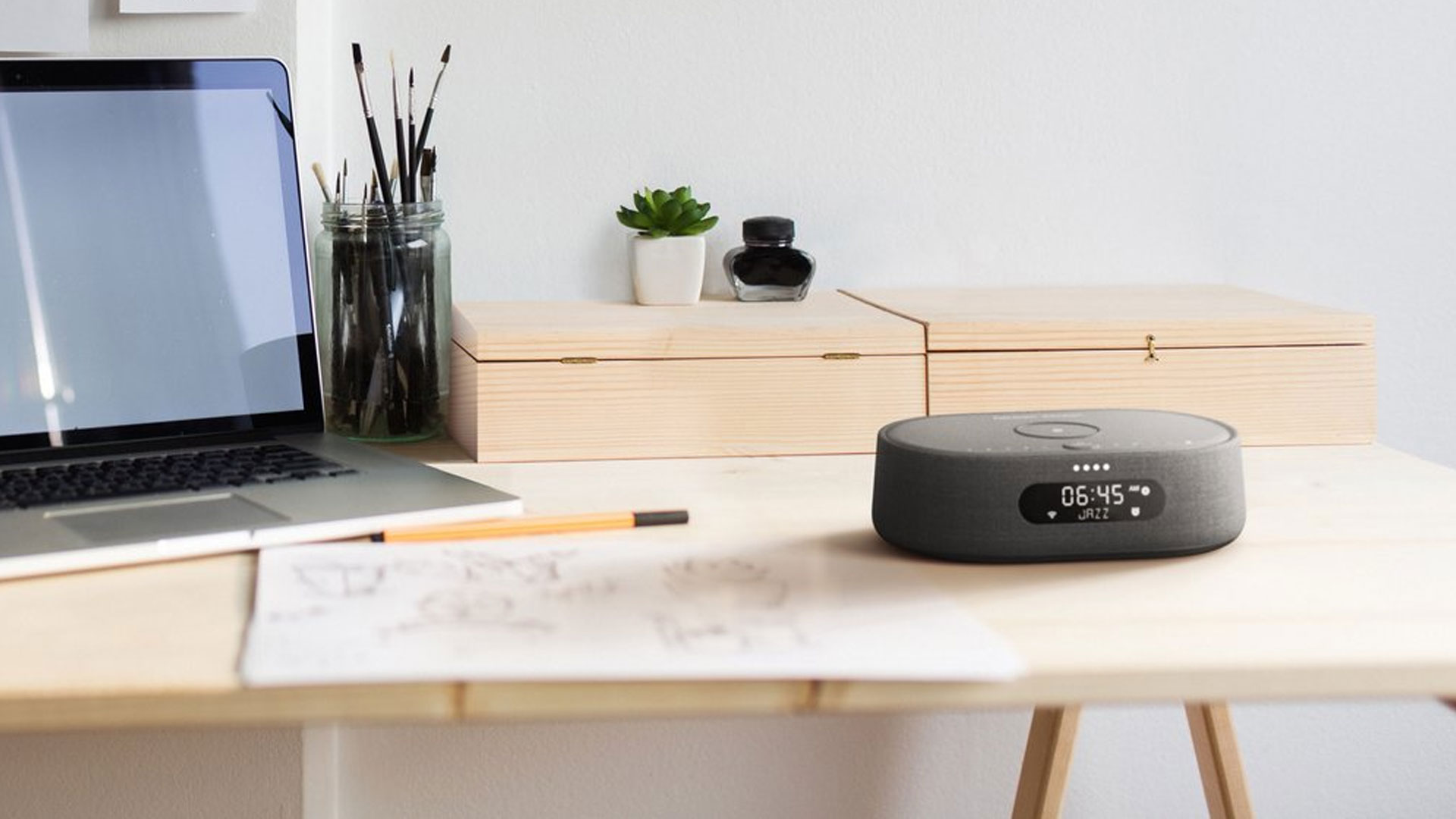 Basically, the Harman Kardon Citation Oasis is a digital clock radio with a large number of extra functionalities. The flat loudspeaker for the nightstand, which is also not out of place on many desks, has an output power of twice 6 watts (RMS). That’s not the real power; that is about twice as high. Just like the other speakers within the Harman Kardon Citation series, the clock radio also supports a lot of audio formats, namely HE-AAC, LC-AAC, MP3, Vorbis, WAV (LPCM), FLAC, Opus.

If you are familiar with the other products within the Harman Kardon Citation series, then you know roughly what to expect. On the sides of the speaker is mixed wool, called Kvadrat. That also gives the Harman Kardon Citation Oasis its unique appearance. At the front we find a large LED display. Unlike other models within the same series, this is not a touchscreen. You can see the time and date here when you are not playing. The device thus fulfills the role of an old clock radio.

On top we find a number of functions. For example, there is a large circle containing a wireless charger. If your phone or smartwatch supports wireless charging via Qi, you can charge your devices at night (when the Oasis is on your bedside table) or during the day (when you place it on your desk). That charging is very slow, so don’t count on having a full battery in an hour. Underneath is a relatively large button that allows you to pause and play music, and to snooze the alarm clock.

To the left and right of it are buttons with touch controls. On the left you choose one of the four preset radio stations and turn down the music, while on the right is the button for increasing the music, as well as switching sources and selecting the next / previous song. There are also some lights above the display. With this you can see how high the volume is, but you can also read that from the screen. Those LED lights are also intended for the Google Assistant: if you speak to the Assistant, the lights light up clearly while listening. 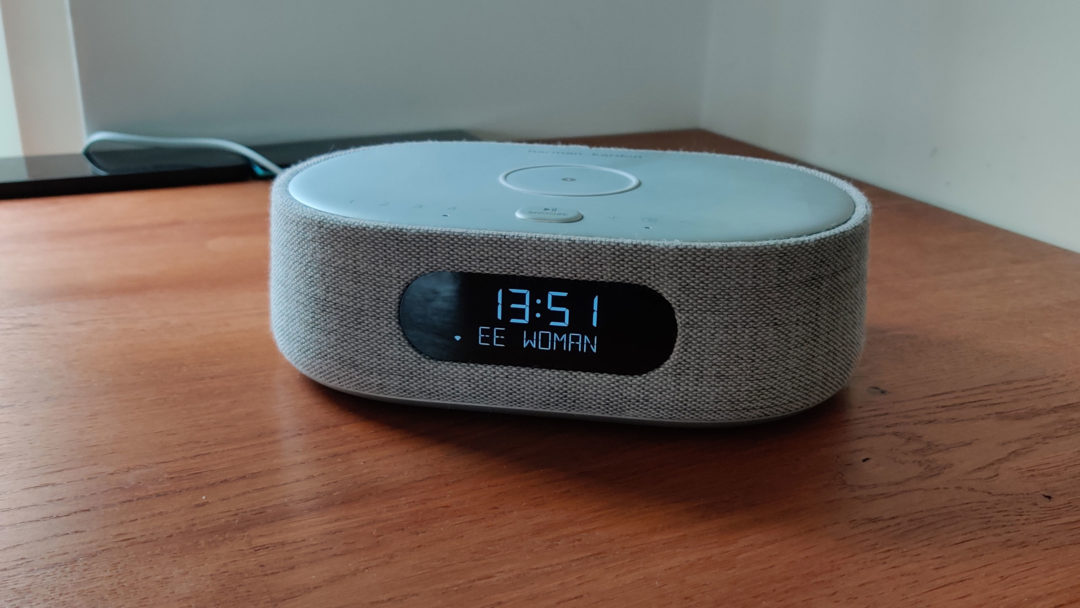 The Harman Kardon Citation Oasis can play audio from various sources. Of course there is the radio function. There is no analog radio available, but you do get access to a lot of internet radio stations and of course everything that you can receive with DAB. In addition, there is a USB port on the back. This not only allows you to charge devices (for when wireless charging is not available on your smartphone), you can also connect an external audio source to it and treat it as an auxiliary device.

In addition, there is also a regular auxiliary input, so you can connect enough devices to it via the cable. If you prefer to do everything wirelessly, no problem. In addition to Bluetooth, options are also available via WiFi. For example, you can use AirPlay and Google Chromecast. Not only is it possible to play music at lightning speed without hassle, you can also include the Harman Kardon Citation Oasis in your multiroom speaker network. Fortunately, it does not matter in this case whether you have opted for the Apple or Google system.

There are also a few useful buttons on the back. For example, you can disable the microphone at the hardware level if you do not want Google to respond to your voice commands. You can also adjust the brightness of the display at the front, so that it may be less bothering you at night. Nevertheless, we think the lighting is still much too bright, but that is very personal. The last button is for Night Wi-Fi. This determines whether the WiFi connection is switched off at night (standard between 00:00 and 06:00) or not.

Since the Google Assistant is present, you can control the Harman Kardon Oasis with your voice. You pause and stop the music, go to the next song and can control the volume. You can of course also request numbers, just like you would with other smart speakers with the Assistant on board. Via the Google Home app you get access to the same basic functions as always and you can of course also adjust and set all kinds of things. Think of the WiFi connection, where the clock radio is exactly located in the house, et cetera.

You can of course also operate the Citation Oasis via a music streaming service in addition to choice. If there is support for AirPlay or Chromecast, you will be fine. You choose the Oasis from the list of available devices (our name is Office 2, because we already had an Office at… office) and then have full control from your own music streaming service. In that respect, the smart clock radio works no differently than other speakers that offer the same functionality. It just works.

What works less well is the operation via the touch buttons. Some buttons have a double function, so you cannot get out without having read the manual at least once. Of course that’s not a big disadvantage, but some extra buttons for radio stations and quick save wouldn’t be out of place. Especially since the buttons are incorporated in the design of the Harman Kardon Citation Oasis. Not a big problem, but it is somewhat at the expense of accessibility. 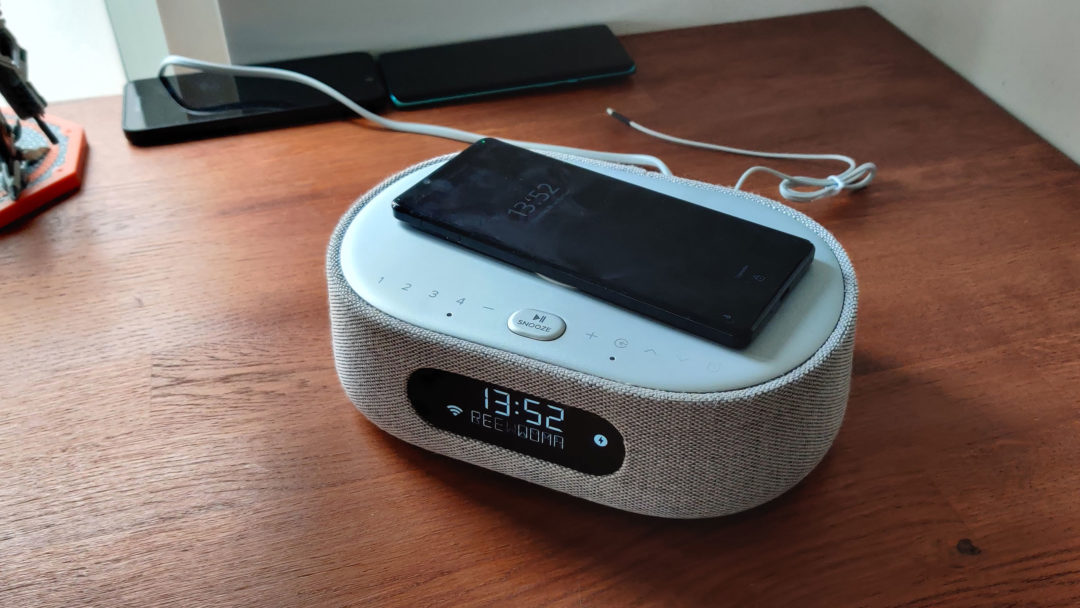 Of course, the Harman Kardon Citation Oasis does not have to fill entire rooms with sound. An average bedroom is smaller than an average living room, so there is no need for large power. After all, it is basically a clock radio. In the bedroom, where the clock radio is often placed against the wall or in a corner, the sound sounds fine. It can go on, even if you still pay 200 euros for the device. The bass reproduction is not your own and unfortunately sounds a bit dull.

The audio quality is not bad. The higher tones sound clear and the mids are relatively warm. But unfortunately the sound doesn’t really go into depth. You can hear that there should be a bass response in certain places; but that bass sounds like you hit a couch with your hand. Again: this is fine for the bedroom, especially since you don’t have to listen to it all day long. If you use the speaker at the office, it is just a different story, but it can continue.

Harman Kardon Citation Oasis is basically a nice product. For 199.99 euros you get an incredibly extensive product with which you can listen to music in many different ways. It is also a digital clock radio, one that you can include in a speaker network. The design also looks great and the wireless Qi charger is very nice. The audio quality is not of a high level; the bass reproduction is in fact quite disappointing. If that is not a big problem, then there is little in the way between you and the Oasis.

Bowers & Wilkins 705 Signature Review • Even more special than ever