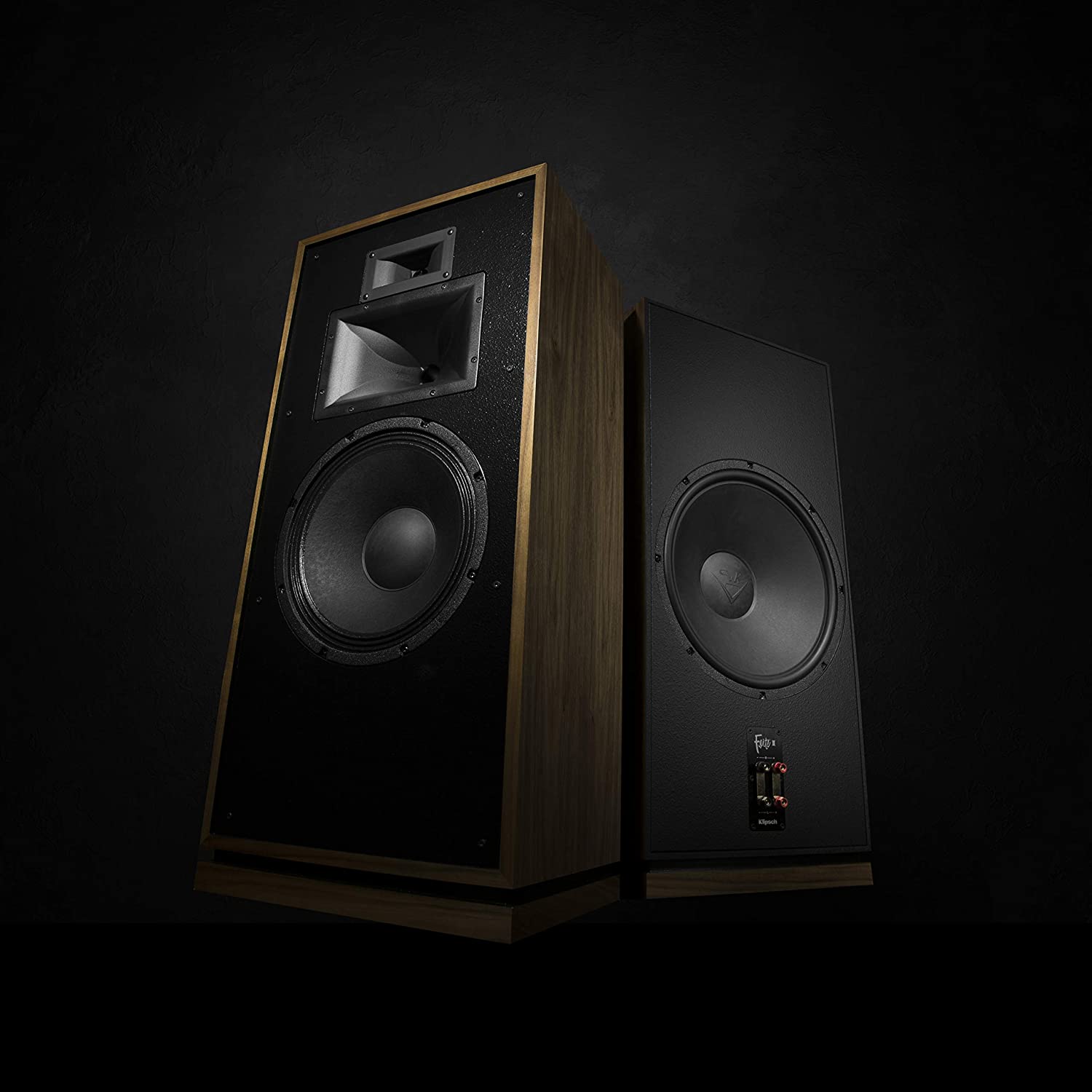 Klipsch Forte III is another note in the nostalgic mood that is pervasive for the good old sound that thanks to the new materials has matured to offer us wonderful emotional, black and white, musical journeys.

Klipsch, on some of its speakers, may seem a bit “stuck” in the past. How can she not be, after all, since she has a unique story that justifies her behaving like that.

Few speaker makers now have as much to say about audio as Klipsch. Just as vinyl is back, so many classic (timeless) sound values ​​are back… with first and best speakers.

It is not only Klipsch that gives us the opportunity to hear the sounds of an era again, but JBL, Yamaha and others. The important thing is that the returning speakers are now better made with advanced materials, with more successful technological solutions and with more impeccable finishes.

So the (old) speakers that came back into our lives have a lot to tell us. Especially for young people who will hear them for the first time.

The evolution of speakers… and fashion may have gradually taken the horns out of the buffaloes, but this type of loudspeaker has never been forgotten, it has always lived (and still lives) in the hearts and constructions of the friends of sound. With the return of the old speakers, the horns or hoppers return.

Klipsch, born in 1946, has a first. Since then, the Klipschorn, its most famous model, has been released, it is the only speaker in history that has been manufactured without interruption until today, for so many years.

But all these years Klipsch has created other great speakers. He calls these Heritage, as a tribute to its founder Paul W. Klipsch, whose photo adorns the cover of the test speaker user manual.

The Heritage series includes all the classic models which are the Heresy, Cornwall, La Scala and Forte. All with the characteristic “III” next to their name.

WITH HISTORY AND FAMILY

The first Forte was launched in 1985. The Forte III follows in the footsteps of the Forte II, the previous model released in 1989 and discontinued ten years later.

It is a rectangular speaker with two horns (one for the high and one for the middle), a low woofer and a beastly passive radiator at the rear.

The older model was up to 32Hz, while the test speaker was up to 38Hz. It wears the new K-703-M horn, which is designed for wider space coverage and better control of the middle area where most of the music information is usually located.

Also read: Bowers & Wilkins 803 D3 Review • An Investment That Will Last For Years!

Each horn is made of plastic and screws (charge) directly to the compression guides that have a titanium baffle, inside it has curved surfaces without sharp corners, something that Klipsch calls “Mumps”.

This achieves sound concentration on the walls of the hopper, reducing tunings close to the cut-off frequency and improving spatial coverage.

The woofer cone is made of 12-inch diameter synthetic fibers and has a larger coil than the Forte II, although the peak power was reduced by 100W in the new model (it is now at 400W).

The Forte series speakers feature the passive radiator located in the center of the rear of the cab, just behind the woofer. He has a diameter of 15 inches, ie 38 cm and looks like a loudspeaker, in his dust cup he has the initials of the founder of Klispch embossed. 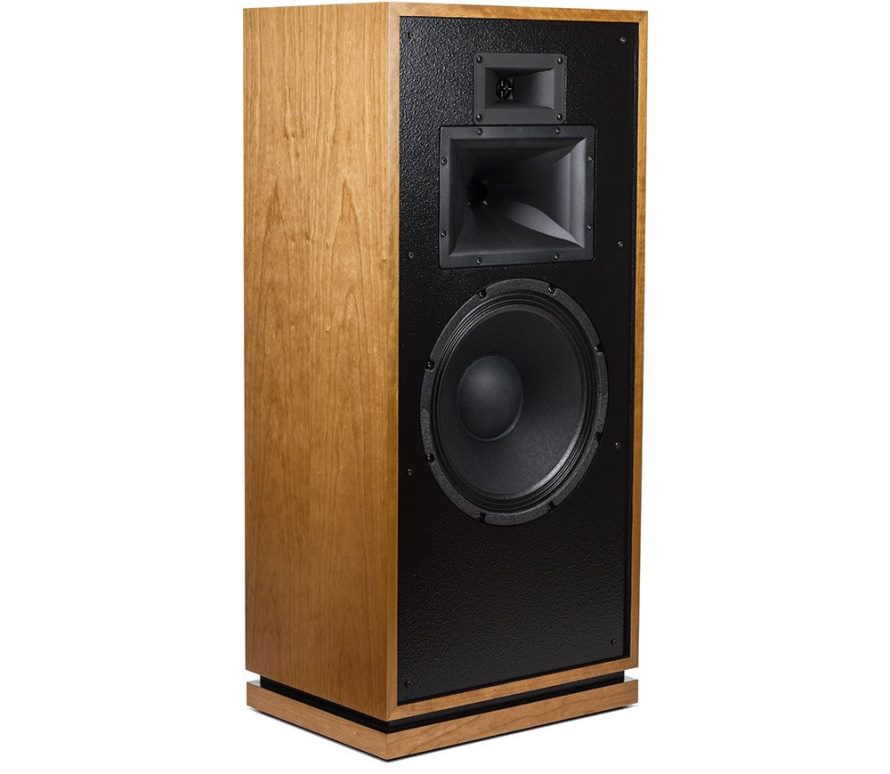 The passive radiator achieves a better and lower response at low frequencies compared to the standard reflection hole of bass reflex speakers. The front and rear surfaces of the cab are textured black, while the rest of the speaker body is dominated by wood.

The construction of the cabin is done in Hope, Arkansas by experienced craftsmen of the company. Forte III is available in four finishes such as aged oak, cherry, black ash and walnut, while there is also the Forte III Special Edition which has a black walnut finish.

The veneers of each pair of speakers come from the same tree, so that the speakers “marry” better with each other, while the water is continuous as it flows on all sides giving a harmonious image when you see them.

What impressed us before we even connected the speakers was the beauty, the imposingness and the confidence that they exuded. The speakers are particularly isolated from the floor that will host it, there are four short legs on a base, which is separated from the cabin.

The rationale behind this construction is the sound utilization of the floor for maximum performance at low frequencies. The buffalo is “recessed” so that when the fabric sieve is placed, it “sticks” with the magnets, so that nothing protrudes from the speaker… as before.

The terminal panel is renewed, it has double bolts, in case we want to double-wire or amplify the speakers. The bolts are metal and strong enough to never bother us, while the crossover is located just behind them and is directly connected to them reducing the use of cables and losses.

MUSIC STORIES
After finding, after a little listening, the ideal location for these “old-fashioned” speakers, we started “work”. The Forte III needs a light toe-in to the listening position to have a secure stereo image, with clear placement, while we will not have a hard time finding their sweet spot.

Also due to the radiator the distance from the wall is very important. 99dB sensitivity made driving a toy even on the weakest amplifiers. Therefore the 60W of VTL IT85 was more than enough for our work.

Those who have heard horns in their lives know that this is a special school, with a taste that falls into the category of “appetite…”. They demand love, devotion and draw you to more personal evening listening, rather than afternoon.

The speakers showed us from the first moment that they are not free and that they want warm sound to perform at their maximum. They do not want cold recordings and strict highs. The many VTL lamps gave us what we needed and although we enjoyed listening to the CDs we chose, there were times when the sound of a mobile magnet head seemed perfect.

This character matched the brass very well and gave AC / DC Back and Black electric guitars soul and dynamism. Their sound is mature, fast and mature and the middle area has volume and body, leaving us without any complaints.

They may not be very hyper-detailed in the microdynamics of music, but their purpose from the beginning is not oriented towards the monitor sound but towards a pleasant musical listening. Almost overwhelmed. Klipsch speakers brought the performers forward, giving them volume and air to breathe so they would not drown in the ensemble.

We would like the low ones a little more rounded although we heard bass with clarity and character. The speakers come just below the height of our ears, lower than most floor-standing speakers, creating the corresponding scene.

Klipsch Forte III is another note in the nostalgic mood that is pervasive for the good old sound that thanks to the new materials has matured to offer us wonderful emotional, black and white, musical journeys.