Reference Premiere is one of the most popular Klipsch loudspeaker series, loved and appreciated all over the world. Over the years, the Reference line has maintained its leading position due to its excellent combination of quality and price. These American loudspeakers have real character and combine powerful sound, brutal looks and cutting edge technology. With the new Klipsch Reference Series, sound quality remains consistently high, no matter where you are in the listening room. The 1-inch tweeter in the Tractrix Hybrid Horn maximizes sound and reaches the listener to the fullest.

The Klipsch Reference speakers can operate reliably at increased power, providing a wide dynamic range, thanks to the larger magnet system in the tweeters, which improves the dissipation of heat generated during the operation of the speakers. You get more bass and less noise thanks to the new Tractrix bass reflex. It has increased efficiency and allows a large volume of air to pass freely. The Klipsch loudspeaker’s low-profile mesh with magnetic mount, tilting mounts and eye-catching speaker mounts give the Klipsch speakers a trendy and eye-catching look. It is easy to change the appearance of the speakers – just remove or put on the front panels. Klipsch has replaced the exterior with natural wood grain vinyl. The speakers now have a more durable and stain-resistant surface. 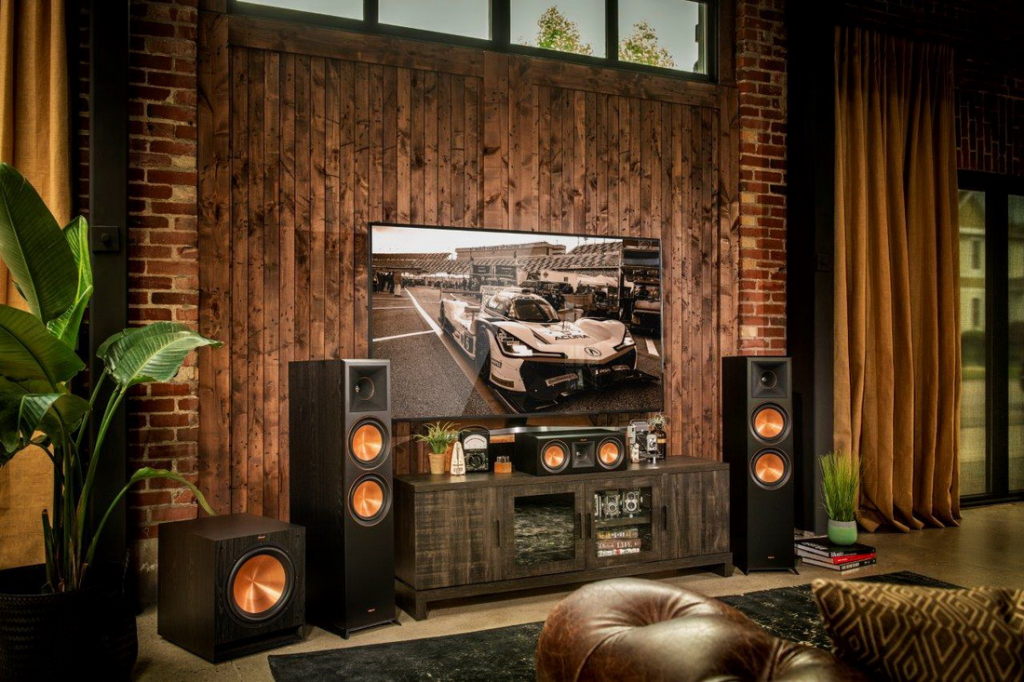 The 2019 Klipsch Reference series is still incredibly rich in a wide variety of speaker systems – passive acoustics are represented by both floor-standing and bookshelf speakers, there are active speakers, center channels, subwoofers, surround acoustics and even Atmos high-altitude channels – an advanced standard for three-dimensional sound space. (like in the coolest cinemas).

The Klipsch RP-8000F is the flagship model in the Reference Premier series, offering all the benefits of a Klipsch reference speaker. Klipsch RP-8000F speakers are equipped with a pair of woofers in Cerametallic combination cones with a diameter of 8 inches, connected in parallel to expand the bass range and loaded on a bass reflex, the outlet of which is located on the rear panel. It features a new Tractrix horn design that allows high-speed airflow through the opening without audible noise.

The front tweeter with a 25mm titanium dome in the loudspeakers is also loaded onto the Tractrix horn. The design feature of the updated HF emitters of this speaker, as well as those used in all models of the Reference series, is the use of a special suspension of the dome, which allows its linear movement while strictly maintaining the horizontal surface. 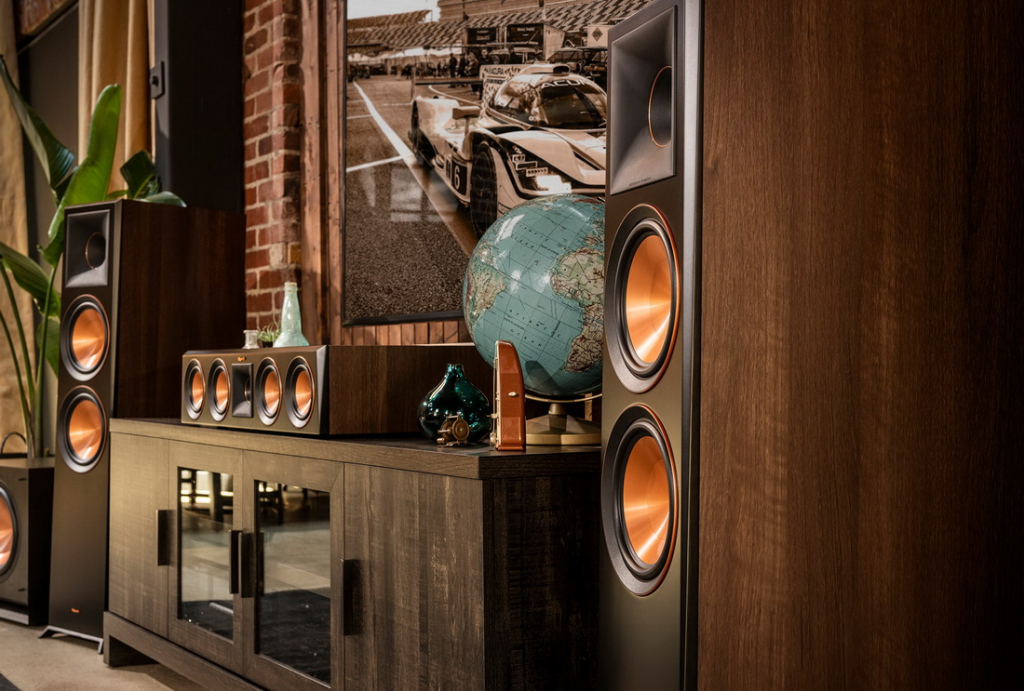 Significant changes in comparison with the previous series have undergone the proprietary Tractrix horn, which now has a square outer outline (90 x 90 instead of 60 x 90 degrees – at these angles the four curved surfaces forming the horn intersect) and a complex hybrid shape: the conical horn oriented near the radiator passes in the characteristic of Tractrix technology, opening in the form of four petals of an original complex configuration with a component in the form of a tractrix. The horns for the outgoing Reference Series were made of ABS plastic, while for the Reference Premiere they are made of injection molded silicone, which has significantly less resonance. In the new speakers, the Tractrix technology is implemented in the design of not only the HF horn, but also the FI port (previously, the company preferred round ports).

The quality of the lower register is very high: sufficiently deep bass is excellently structured and articulated, in dynamic and timbre terms it is in no way inferior to the middle and top. Externally, the Reference Premiere models differ from the previous generation speakers due to a number of expressive, albeit subtle details. With a design focus, as well as for the prevention of diffraction, the creators of the line made chamfers along the perimeter of the front wall – on three of its four edges. The dark gray (almost black) front panel and stand differ from the rest of the speaker surfaces in color. With the protective grilles removed (they cover the entire front of the Klipsch RP-8000F, they are conveniently mounted by means of hidden magnets), it can be seen that the midbass diffusers and the logo, oriented directly under the horn, are identical in color. Two pairs of input connectors allow you to connect your speakers in a two-wire way. A pair of woofers / midrange speakers works flawlessly in the band allocated to them up to 1.75 kHz. In this case, the lower frequency segment imperceptibly joins the upper one, and you cannot hear that the speaker in the horn is working at the top. The Klipsch RP-8000F presents music with integrity and accuracy. The sound of the speakers is objectively very good, as can be judged by the presentation of different musical styles. Loudspeakers that handle musical material so well, naturally, will not disappoint in a home theater either.

Almost from the time the company was founded, Klipsch acoustics have established a reputation as the standard of American hi-fi sound. And in modern products of this brand adherence to the canons of the golden era of audio is traced – high sensitivity, horn design, enhanced bass link … This is how the RP 8000F “towers” from the Reference Premiere model family are built, which we are going to listen to with both digital and analog sources. There are not many companies like Klipsch in the world – this is not just a brand, but a part of history. Founded in 1946, it immediately established itself as a manufacturer of loudspeakers with a distinctive, unique sound. Of course, at that time, the amplification was exclusively tube, and systems with a sensitivity of 100 dB and higher were designed for it. Models such as Voice of the Theater, La Scala, Heresy and Klipschorn have become true symbols of great American sound. New Klipschhorns, by the way, can be found on sale now – in 2016, an anniversary version dedicated to the 70th anniversary of the company was created. Now the company keeps up with the times and produces acoustics for various purposes – professional, hi-fi, theatrical, portable, built-in, all-weather and wireless, as well as an extensive range of headphones.

We are testing the floor-standing model Klipsch RP 8000F – the oldest in the Reference Premier series. Despite belonging to the elite, the systems cost quite sane money – 150 thousand rubles per pair. Klipsch can keep such prices not because it literally saves on everything – it is affected by large production volumes, proven technology and well-organized production in China under the supervision of experienced engineers. The seriousness of the approach is evidenced by the complete table of parameters given in the user manual (we do not publish it in its entirety due to space savings). It specifies the deviations of the frequency response and the level of distortion in different parts of the operating range, and these values ​​are extremely small. 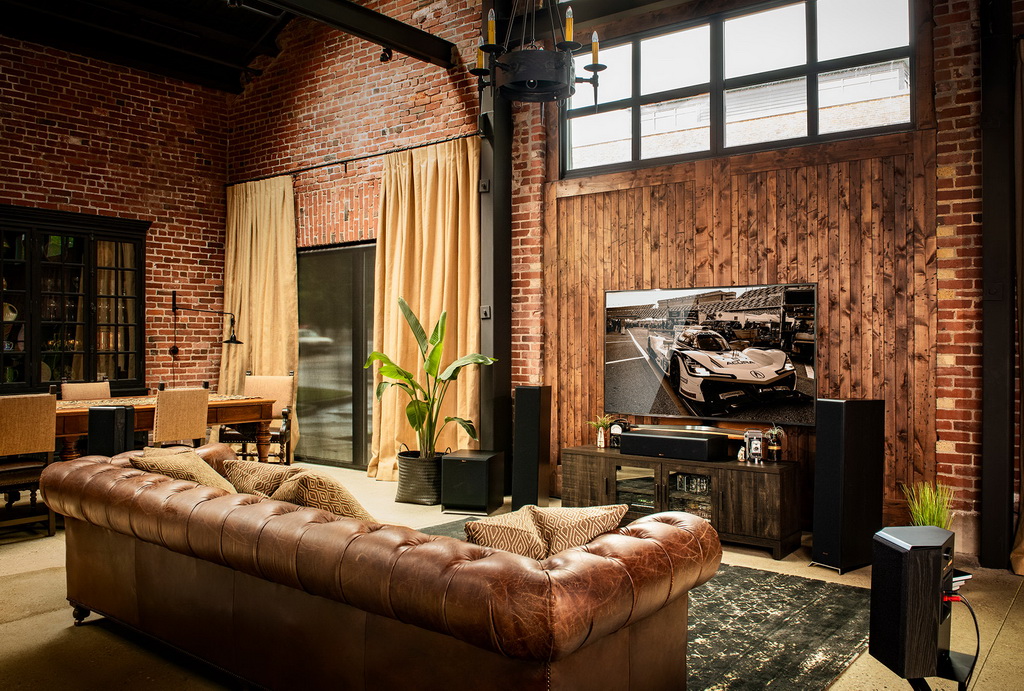 Klipsch RP 8000R – two-way systems. Frequencies from 32 to 1750 Hz are reproduced by a pair of 8-inch drivers with proprietary Cerametallic cones made of aluminum with the finest ceramic coating that gives the surface a copper tint. Such a composite has high rigidity with a low weight, and the ceramic layer dampens the natural resonances of aluminum and, as a result, eliminates unwanted overtones. Wide elastic suspensions are designed for large displacements of the moving system. The low-frequency tandem operates in a bass-reflex design, a vertical rectangular port with Tractrix geometry is brought out to the rear wall of the case.

Generally speaking, the Tractrix is ​​an envelope shape of a horn that creates an optimal load for the driver installed in it. The bass reflex port in our case not only lowers the resonant frequency of the system, but also dampens the rear radiation of the low-frequency diffusers. Due to this (including), we managed to get a low percentage of distortion in the middle band, which is very important for our hearing.

Tractrix performs a double task in the design of the tweeter. An inch titanium dome is housed in a two-piece horn, separated by a copper ring. The inner part, molded from hard plastic, due to the air column in the neck, sets the optimal load for the tweeter. The outer bell, made of elastic silicone, forms the required directional pattern without introducing its own resonant overtones. However, the HF horn has a third purpose – it expands the operating range of the tweeter downward for more reliable docking with the LF / MF drivers. The design was developed specifically for the Reference Premier series and has not been used in other models. 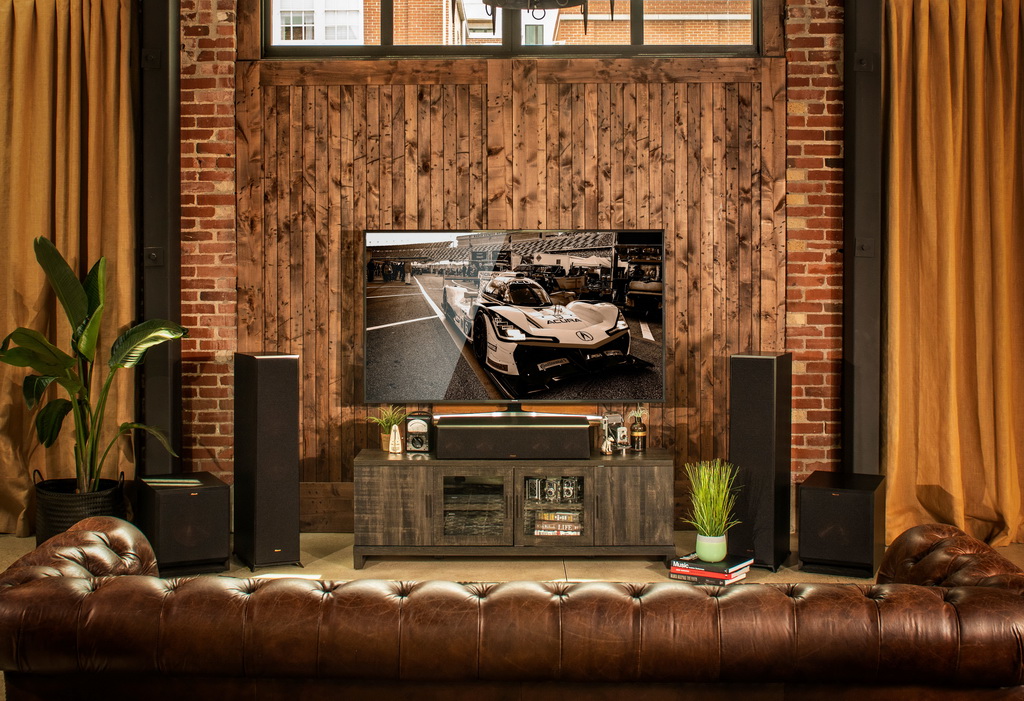 Klipsch traditionally uses second- and fourth-order phase linear filters to separate the low and high frequency bands, respectively. The circuit topology is bi-wiring. The hull is constructed of 20mm MDF boards with vertical and horizontal baffles to increase rigidity. Instead of traditional spiked supports, an aluminum frame is attached to the base, which sets a small angle of inclination of the bezel. This is done so that the front of the wave from the tweeter and more inertial bass cones come to the listener at the same time. They are finished with Klipsch RP 8000R high-quality foil imitating walnut veneer and ebony, but there is also a more expensive option in piano lacquer. Black fabric grills are magnetically attached.

To be honest, I have always had a bit of a bias towards highly sensitive horn systems. As a rule, they have noticeable coloration of sound and an increased level of harmonics. Sometimes the color is pleasant, and the harmonics give a certain warmth, but with your mind you always understand that all this beauty is not High Fidelity. The Klipsch RP 8000R is a unique exception in this respect. The tonal balance does not raise any questions at all – across the entire range there is not a single frequency segment that would stand out from the overall picture. Music with a complex spectrum (orchestral classics, hard rock, ambient) sounds harmonious, whole and harmonious. No matter how hard I strained my ears to hear the horn color in the upper middle, I never heard anything. 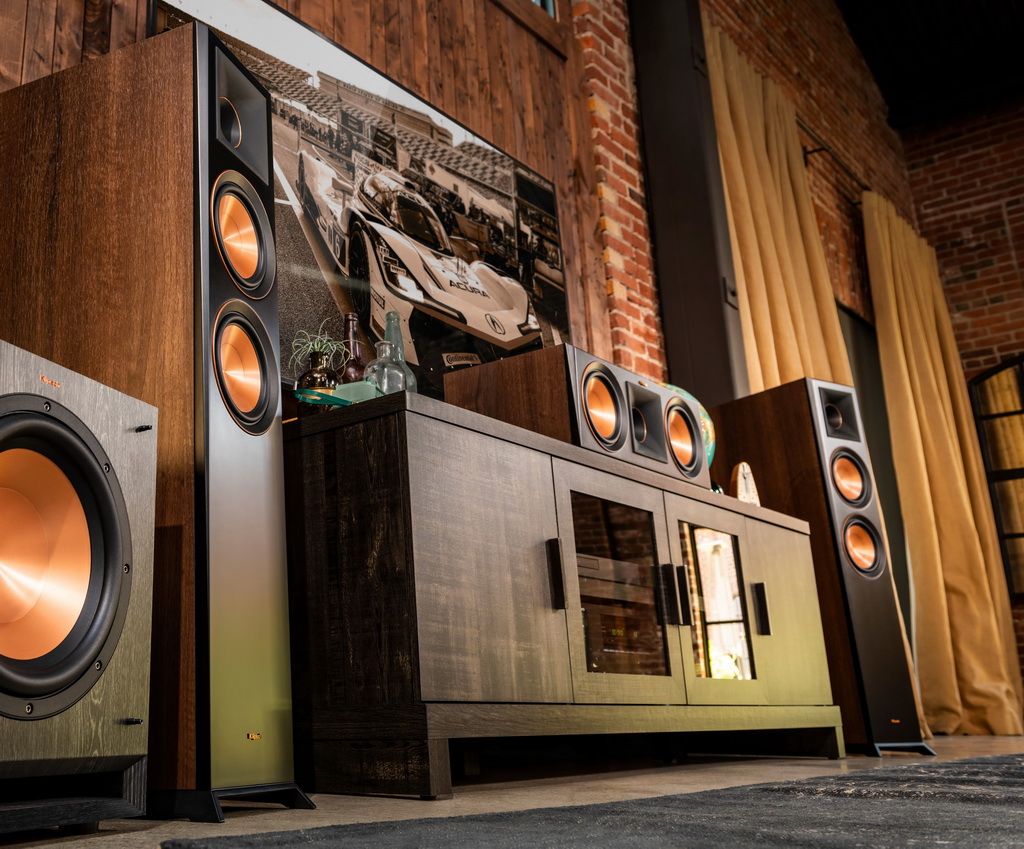 But I would not call the sound of these towers monitor – it is bright, fast and emotional. The systems are highly sensitive, they respond to the slightest differences in the input signal, and such microdynamics greatly enliven the flow. And at macro levels, the diffusers give out a sharp, energetic attack with a noticeable punch. Four 8-inch drivers are capable of pumping an impressive area of ​​the room, while they do not tighten notes and keep up even with a very fast rhythm. The depth of the bass is such that notes appear in the sound, which are not so much heard as perceived by the body.

Horn design subjectively affects only the directional diagram. In order to fully experience the atmosphere and richness of shades in the uppermost spectrum, it is better to turn the speakers slightly inward so that you yourself are at the intersection of the acoustic axes. In this case, it turns out to be a real holiday, completely regardless of which musical genre you prefer. And as a bonus – a three-dimensional scene, in which some images are localized even in height. In general, the RP 8000F is good because it will allow you to build a budget system with a very exciting sound – they themselves are not so expensive, and you can save money on the amplifier.