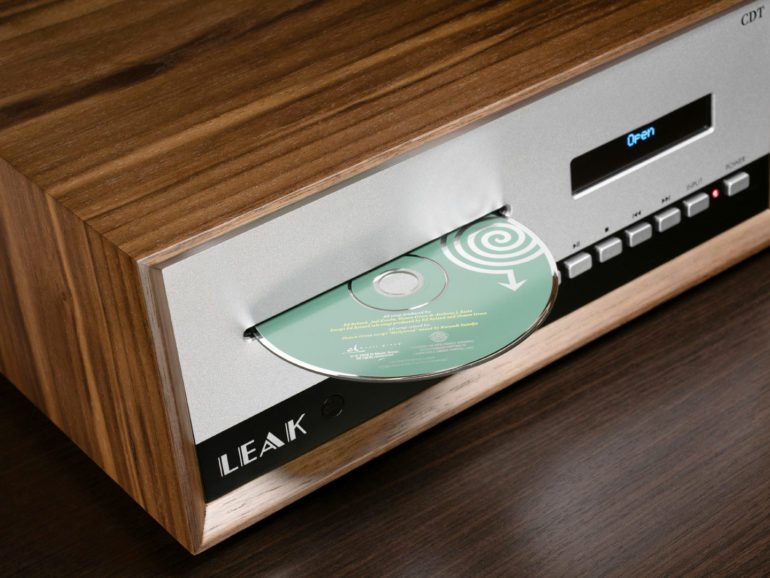 Who would have thought that almost 40 years after the release of the last serial amplifier, Leak would suddenly wake up and, looking around, not paying attention to the worldwide lockdown, would show the light of its new creations: Leak Stereo 130 integrated amplifier and Leak CDT CD transport.

On the other hand, some lull during this period of time played into the hands of Leak. Reborn from the dust at a time when some brands only think about how not to turn into it – a strong act worthy of a British gentleman.

Everyone understands that in our time it is impossible to just pick up and be reborn. It’s another matter when the investment portfolio of the IAG Group, the owner of several famous classic British audio brands (Wharfedale, Mission, Quad), looms behind us.

Oh, that retro design … Many brands resort to using a potentiometer with arrows. It seems to be already retro, and the rest of the controls, according to the residual principle, are located around the arrows.

Leak took a difficult path – it’s retro in retro style. “Such a radio from the 70s,” I thought, looking at the photo of the subject the day before testing. But when I saw the Stereo 130 live, it won me over.

It is difficult to formulate exactly what the matter is. This is most likely a combination of an aluminum bezel and a natural walnut body. But the controls on the front panel are not lost either, the eye catches on them – and does not find anything superfluous.

Very harmoniously, albeit in different forms, on the front panel there are “knobs” for adjusting the volume and input selection, knobs for adjusting the tone block and a rectangular “direct” button, which warms the soul with a soft red diode light, as well as a “power” button with the same diode and a headphone jack for a 6.3 mm plug.

The lower part of the bezel is painted black – the “Leak” logo printed on it remains silver. The wood of the case frames the front panel with a small ledge – there is confidence that it feels very comfortable there.

The rear panel is also aluminum and full of commutation connectors – despite the modest dimensions of the amplifier, there are indecently many of them here. Let’s start with the analog ones: these are four pairs of RCA connectors. Two pairs of them are used to connect external analog sources, the third is the MM phono amplifier connectors. The fourth pair is the output from the preamplifier. Slightly to the right are two pairs of terminals for connecting speaker cables.

The right side of the panel is mostly reserved for digital inputs and outputs – there is also a DAC inside the Leak Stereo 130! The ESS Saber ES9018K2M allows the IC to digest DSD256 and PCM up to 32bit / 384kHz. To receive a digital signal, there are two optical inputs, USB Type B and a coaxial connector. For transmission – one coaxial and one optical output.

To connect the amplifier and external devices via Bluetooth, the aptX protocol is used. There are also two connectors for connecting the amplifier, for example, to a smart home system: Triger IN and Link in 3.5 mm format.

We are gradually starting to get used to the fact that devices of this size most often work in class D or its derivatives. Leak, however, decided not to change traditions – Stereo 130 works in AB class. After all, its distant ancestor from the 70s – Leak Stereo 30, which still enjoys the attention of lovers of vintage sound, was taken as the basis for the newly-made integral speaker. The similarity can be seen in the design – it is simply impossible not to recognize Leak.

The power characteristics of the Stereo 130 are not very impressive by today’s standards: 45 watts per channel into 8 ohms and 65 watts into 4 ohms. But after all, not every pair of acoustics requires the parameters of the welding machine from the integrated amplifier, the currents and powers of which are often excessive at home.

According to information from the manufacturer, the IC is equipped with a 200 VA toroidal transformer, the analog and digital parts have separate circuits, and all important circuitry elements have been carefully screened.

They are designed to stand side by side and always be together. When the Stereo 130 is visually complemented by the Leak CDT CD transport, the aesthetic pleasure is multiplied. Even for me, a fan of all kinds of high-tech solutions in design, this couple created a feeling of coziness and comfort – and no newfangled brutal guys on the next counter were able to prevent this.

Externally, the CDT front panel is made in the same style as the Stereo 130 – these are rectangular silver buttons that are located on the lower black border of the front panel. A little higher is the most primitive display for displaying the required minimum of information about the CD. I don’t think the technicians at Leak skimped on a cooler display – it just wouldn’t fit into the design concept.

To the left of the display is a slotted slot for loading a CD. And under it, next to the playback control buttons, there is a USB Type A connector – fans of listening to music from external solid-state drives can nod their heads in approval, squinting their eyes. Supports FAT16 and FAT32 format media, as well as WAV, MP3, AAC and WMA audio formats with a maximum frequency of 48 kHz.

Rear panel commutation has only digital outputs, since CDT does not have its own DAC. Leak’s engineers decided that one coaxial and one optical output would be sufficient. I will not argue with them.

In addition, they have arranged a separate power circuit for the CD drive and secured shielding to avoid any interference. And the temperature-compensated clock generator is responsible for the accuracy of the drive.

By the way, both devices are produced in two design solutions: in a wooden case and in a familiar metal one. To my taste, wooden cases look more interesting, but the price tag for using natural walnut is a little higher.

Leak Stereo 130: everything on the shelves

Let’s first evaluate the Leak Stereo 130 as a standalone device. To do this, add to it companions devices and acoustics, the sound parameters of which are already well known. The choice fell on the Naim ND5 XS streamer and two pairs of speakers to add contrasts to testing: the Wharfedale EVO 4.3 and Dali Oberon 5.

With the first pair of acoustics – Wharfedale EVO 4.3 – the integrated speaker has already made it clear what it is capable of. The Stereo 130 did a good job of controlling these small, but already floor-standing speakers, taking the bass to depths that I think the EVO 4.3 was surprised at.

Of course, on the lowest parts EVOs are not inclined to fullness and volume, due to their dimensions and the size of the bass cones, but still this bass was well felt and was contoured by control. An example is the track “Devil’s Dance” by Anna-Sophie Mutter. The low-frequency support here is periodic, but very solid – and Leak made every effort to ensure that the listener felt the composition in full.

Anna’s violin sounded like a full-bodied musical instrument, with a slightly softened but not hidden high frequency region. Its transitions and passages of tonalities did not strive to merge together and were well read against the background of the orchestra. As for the vocals, there are fullness of overtones, intimacy and clear images.

At this moment Valery Syutkin’s voice wanted a little refinement – the track “I am what I need” obviously asked for more air and space. “Tone block!” – a thought flashed through my head and was immediately realized in practice. With the “direct” button turned off, no special changes in the sound were noticed. Perhaps the most subtle matters have stopped their journey to the ears of the listener, but this is already on the verge of fantasy.

When the HF tone control turned clockwise by about a quarter, exactly what I wanted to hear from Syutkin appeared. The vocals played with new, not so thick colors, and was redrawn with a thinner brush. She reflected her voice in the same volume, but with more details. At the same time, we did not notice any degradation of sound when using the timbre block – it very neatly introduces new shades into the sound without disturbing the overall picture.

Moving on to Dali Oberon 5. They pursue other goals that clearly contradict the intentions of the Wharfedale engineers. And these goals set a new direction that led the listener through a clear path full of pleasant melodies.

Dali’s tonal setting came in very handy here. The sound of the system has acquired a more balanced presentation. Leak Stereo 130 made the difference between these speakers very clear. Both on a general scale and in small details: in the construction of the stage, in the tonal arrangement of the vocals, in the speed of the attack and in the broaching of the bass trains – the 130th seemed to be an experienced examiner taking credit from freshmen.

Eliminate Naim from the setup and leave Leak alone with Leak. I was anticipating that finally, in conjunction with the Wharfedale EVO 4.3, I would hear the “English breed”, “an uncontrollable stream of timbre pleasures” and other verbal exercises that are used to reward the “typical English sound”.

But here Akella missed. As it turns out, in previous setups, the Naim ND5 XS dominated the pitch, and the Leak Stereo 130 struggled to adjust the sound in its own way. It is worth noting that he did it successfully: knowing the overall density of the Naim sound, subtract three quarters from it.

Now the Stereo 130 received a digital signal via the coaxial output from the Leak CDT and could give all the energy to convert it to analog and broadcast to the speakers, rather than dissipating amperes and microfarads to curb Naim’s temperament.

And here’s what came of it. It’s clear, detailed and neutral! With good rendering of images and scene width. The Naim screen skillfully hid some of the nuances from the listener, throwing up the weight on vocals and bass, giving less space to the bright sparkles on the treble, but leaving them readable. Now Leak has appeared in all its glory – and the poles have radically shifted.

The combination with Wharfedale EVO 4.3 turned out to be “tasty”, with the same extreme immersion in the depth of the bass for them, but now I didn’t want to fix the volume and sophistication of Syutkin’s vocals – it was natural and free, floating above the accompaniment. In conjunction with Dali Oberon 5, the tonality of the vocals shifted slightly higher – and now Dali have become more recognizable.

At this stage, the signal coming from the Stereo 130 and CDT adjusted the final sound to some of its parameters – and it made me stand in the position of a potential buyer of a Hi-Fi system and think hard. If I had to choose the acoustics for the Leak components, I would not have been able to do this after spending only a couple of hours listening: both Wharfedale and Dali played great with them, with slight differences in taste. And none of these differences at the time of the test could tip the scales.

It’s safe to say that a fresh wind of investment has pushed the Leak developers in the right direction. The first components after a long hiatus were published with full readiness to conquer setups, sharpened for high-quality audio reproduction. Leak paid attention to both the design and the sound of their devices – after all, at such a crucial moment, they simply could not afford to miss. And they hit spot on target!