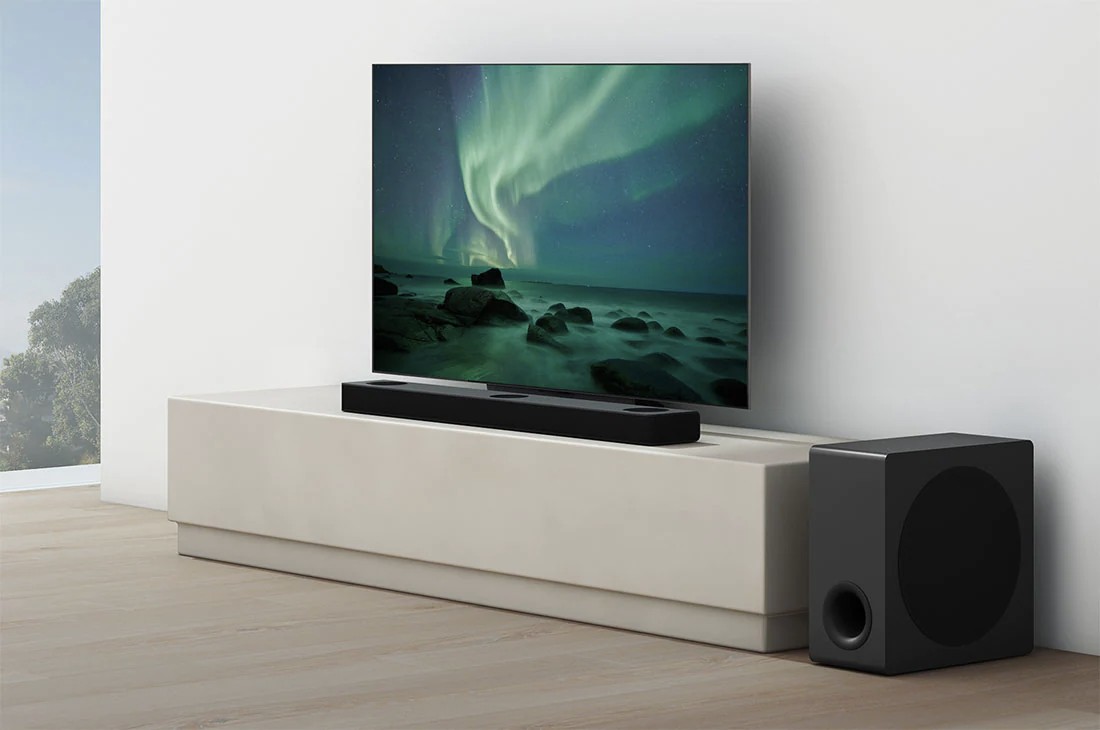 The LG S80QY is a mid-range soundbar from LG’s 2022 range with 3.1.3 sound scheme. Its distinguishing feature is an additional center channel in the height speaker segment. Automatic adjustment depending on the size of the room is due to AI Room Calibration technology.

You can expand the soundbar to 5.1.3 format using two speakers, which will have to be purchased separately. In this LG S80QY review, we will try to identify the strengths and weaknesses of this soundbar from LG.

The LG S80QY soundbar has a design that is very similar to other LG 2022 models such as the LG S90QY and LG S95QR . The main body elements are made of plastic. The fabric covers the front and sides. At the top of the case are three metal grilles that cover each of the upward facing speakers.

The soundbar itself is 1000mm wide, 62mm high and 135mm deep. On the one hand, the soundbar is low. This makes it possible to place it under the legs of the TV. On the other hand, its meter width will not allow it to fit under a 55-inch TV. The subwoofer is 405mm high, 202mm wide and 401mm deep.

In other words, the subwoofer is very similar in size to the case of a desktop computer. Thanks to its wireless connection, this subwoofer can be placed anywhere in your room. To activate the subwoofer, it is enough to connect it to a power source.

The back of the S80QY soundbar has openings for the power cable and inputs. If you want to attach the panel to the wall, the holes are located under the panel. The back of the subwoofer is also quite simple. There is nothing on it except for a network cable connector. The USB port is on the front.

In addition to the acoustic panel and subwoofer, the delivery set includes a one and a half meter HDMI cable, an instruction manual, mounting brackets with screws, a remote control with two AA batteries and two network cables for connecting the panel and subwoofer. 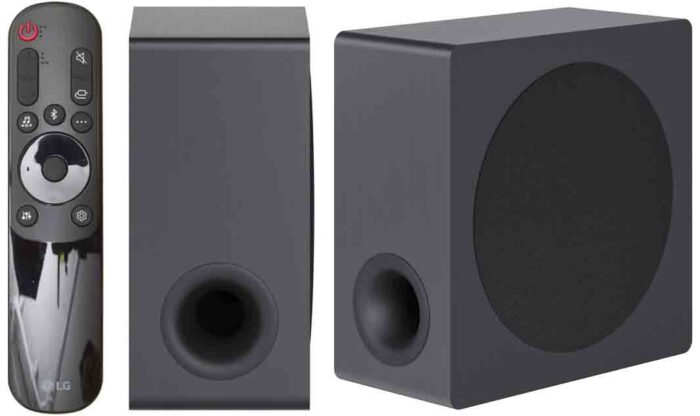 The LG S80QY soundbar has a very good frequency response in stereo mode. As with most premium settings, there is a room correction feature that allows you to adjust the sound of the panel based on the acoustics of your room. This technology is called AI Room Calibration. The sound quality in this mode is very similar to that of the LG S90QY.

The sound is overall smooth and fairly balanced. The sound quality is especially evident in the middle frequencies, where most voices and leading instruments are reproduced. There is an extra boom in the bass that helps to feel the depth of the sound. With bass set to “-2” and treble set to “3”, the S80QY soundbar has a more neutral sound profile.

In addition to such adjustments as bass, treble, subwoofer, height level and rear level, the soundbar has 9 fixed modes. Of these, I would like to note the Cinema mode, which creates additional surround sound due to mixing. There is also a Clear Voice mode that increases the volume of dialogues.

Overall, the audio sounds pleasing, and vocals and lead instruments are crisp and detailed thanks to balanced mids and highs. Bass is present but not overpowering. However, there are still small dips in the low and high frequencies, which are especially noticeable with high vocals.

Overall, the LG S80QY acoustic bar has a decent stereo soundstage. This scene appears to be slightly wider than the panel itself. Sound objects, such as instruments in an orchestra, appear to come from more general areas rather than precise locations on the sound stage.

Also, the panel has excellent stereo dynamics. The sound can be made quite loud. This means that the soundbar can fill the average living room with sound. However, the sound is not as loud as other premium bars. In other words, the device will not sound perfect in large outdoor venues.

Overall, its center channel performance is excellent. Dialogue is played clearly and accurately. In addition, dialogue is discretely localized for precise positioning on the sound stage. However, the extra center channel pointing up doesn’t make much of a difference. Its characteristics are similar to other panels having only one center channel.

About the quality of surround sound in modes such as DTS and Dolby Digital, there is not much to say. The sound in these modes is rather mediocre. And the reason here is not in the quality of the speakers themselves, which the system is equipped with, but in the missing rear speakers, which are not originally in the package. Earlier it was mentioned that the device has a 3.1.3 sound scheme.

That is, the device has a subwoofer, two front and one center channel. As you can see, there are not enough rear speakers to reproduce 5.1 sound . When 5.1 sound content is fed into the soundbar, the device starts mixing it. As a result, the end user receives sound that does not come from the rear speakers, but from the front ones.

When serving content in Dolby Atmos mode, a subwoofer and three height speakers somewhat brighten up the lack of rear channels. However, the user does not get the real effect without rear speakers. There are two options for solving this problem. As mentioned above, it is possible to purchase a pair of rear speakers, which are sold separately.

They will match perfectly with the LG S80QY acoustic panel. The second option is to ditch the S80QY soundbar and purchase the LG S95QR soundbar, which not only features rear speakers, but also has a 9.1.5 sound scheme (15-channel audio). So, in Dolby Atmos mode, this soundbar will sound much better. 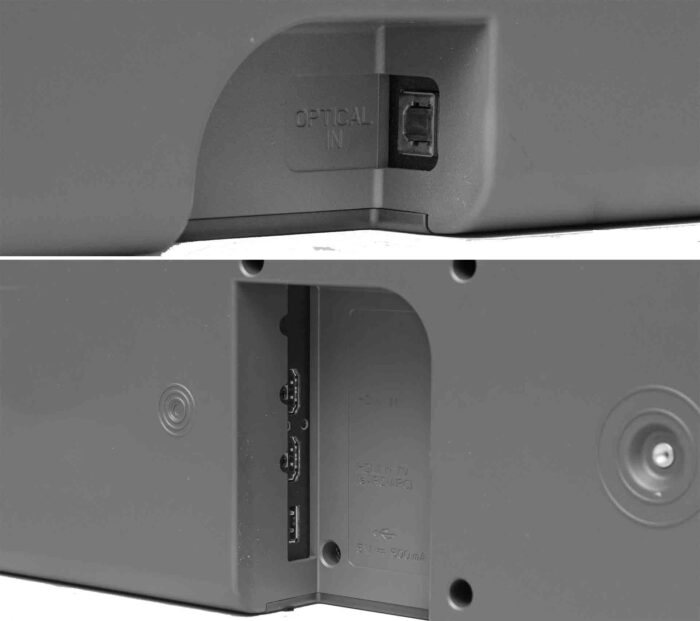 S80QY has a USB port and 2 HDMI connectors. One of them is the input and the other is for the output signal. One of the easiest ways to connect your soundbar to your TV is with the included HDMI cable.

In addition, one of the HDMI connectors is equipped with an ARC connection . It is also possible to connect the soundbar using an optical cable, which will have to be purchased separately. Wireless connections include Wi-Fi and Bluetooth.

The LG S80QY has pretty good sound straight from the factory. The wireless subwoofer adds depth to the bass range. Voices and lead instruments in music and TV shows are played quite clearly, although the higher frequencies are slightly shifted.

The S80QY has many settings that the user can set to his “taste”. There is also support for Dolby Atmos. In addition, the soundbar can play surround sound formats such as Dolby Digital and DTS. However, due to the lack of rear speakers, the sound effect will be incomplete.