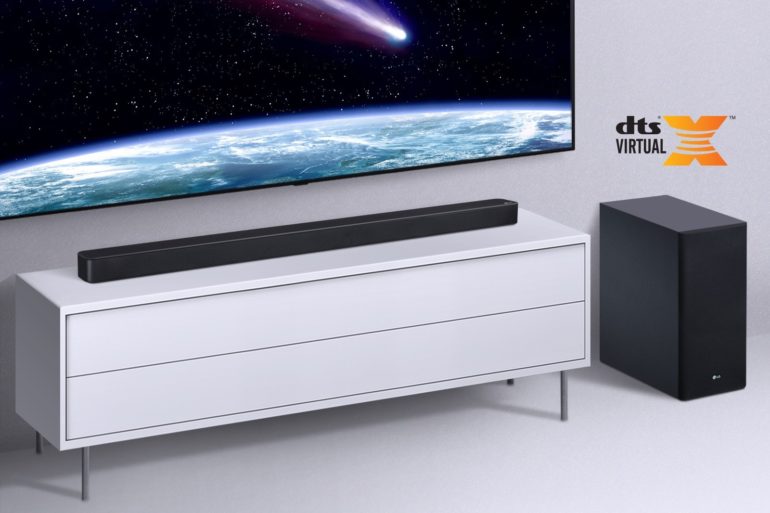 It seems that LG has been putting a lot of emphasis on the soundbar market lately. At least that explains why they produce so many models year after year, and their 2019 lineup consists of 7 different models. Those. you can understand that they are determined to conquer a large part of this emerging market.

LG SL6Y is a 3.1-channel sound system, which consists of a main unit and a wireless subwoofer with a total output of 420 watts. Supports DTS Virtual: X, can play Hi-Res sound, can be expanded to 5.1ch.

The soundbar has built-in Bluetooth for wireless streaming and belongs to the mid-range segment. The LG SL6Y soundbar combines high performance with an affordable price, but lacks in surround sound. We offer a short review of LG SL6Y, in which we will take a closer look at its characteristics.

LG SL6Y has a main unit, which houses three front channels, and a wireless subwoofer. So we actually have a system with 3.1 channels. At first glance, it looks very much like its younger brother SL5Y .

LG made very minor changes to the overall design to include a third center channel in the main soundbar. As a result, the length of the panel itself has become longer. It is ideal for any TV 49 “and up. The subwoofer hasn’t changed – LG believes it has the power it needs to power this device.

The design of the SL6Y soundbar has a relatively straight appearance with curved corners, the top side is covered with a rough textured plastic. And the entire front surface is covered with a perforated grille that maintains an overall symmetrical appearance. The LG logo is located in the upper right corner. 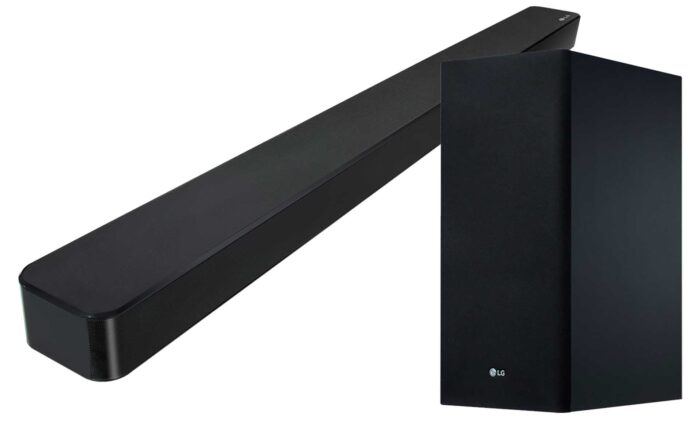 Likewise, there is a panel with four control buttons on the right side of the LG SL6Y soundbar. It contains a power on / off button, two volume buttons and an F button. The latter has different functions depending on how many times you press it, including input selection, USB and Bluetooth. These physical buttons are covered with a membrane that prevents them from collecting dust.

The LCD is slightly off-center. It can display up to 5 characters and is very convenient for controlling the executed command of the device. In addition, the display will turn off after 15 seconds of inactivity and will not distract you when watching content for an extended period.

On the back are all connections grouped together, except for the power connector, which is located away from the rest. The SL6Y has the same low profile as the SL5Y, making it easy to install under any TV. There are several wall-mounting brackets included that you can use to mount the soundbar to a wall.

Similar to the SL5Y, there are 40 x 100mm oval mid-woofers behind the fixed grille, in addition to the 20mm silk dome tweeters. The use of oval speakers means that the LG SL6Y soundbar can maintain its performance even at a lower than normal profile.

The SL6Y differs in that here LG has changed the power of the right and left channels to 80W (45W + 35W) for each channel, and also added a center channel of 40W. This gives a total of 200 watts compared to the 180 watts of the SL5Y.

You will need a remote control to fully control your SL6Y soundbar. The kit comes with a rather large plastic remote control with several large buttons. The buttons look like regular rubber, but they are very responsive when pressed. The backlight function is not available.

It should be noted that the SL6Y supports smartphone or tablet control via the “Music Flow Bluetooth” app, which can be downloaded from the Google Play store. This app is only supported on Android devices. If you have Apple, you’re just out of luck. The app includes several additional features. For example, dynamic range control, automatic volume control, and night mode activation.

We briefly mentioned above about the built-in Bluetooth function on the LG SL6Y soundbar. This means you can stream music from any mobile phone or device to the panel. I would have liked to see Bluetooth 5.0, but unfortunately the SL6Y comes with version 4.0. But even such a connection shows good stability.

Sound modes are switched from the remote control. Each sound mode can be used depending on the content you are watching or listening to. ASC (Adaptive Sound Control) is also available, which analyzes the played content and makes adjustments so that the unit reproduces the most optimal sound.

There is also Bass Blast which can be used by bass lovers. Standard mode produces more balanced acoustic performance. Finally, DTS Virtual: X is the mode that LG has touted the most for mid-range soundbars.

If surround sound is your problem, it is possible to expand the kit to a full 5.1 surround system with the optional SPK8-S kit, which includes a receiver module and a pair of satellite speakers.

This kit connects to the soundbar wirelessly by simply pressing the sound setting button on the remote for 3 seconds. Surround sound becomes alive and healthy! Simple, easy and effortless, as it should be with such a device.

When looking at the LG SL6Y soundbar from the back, the power connector is on the right, and all other connections are grouped in the inset on the left. The switching includes a USB port (5 V / 500 mA), which can be used to connect any external storage device or flash drive, an optical digital input. There are HDMI inputs and HDMI output with added ARC.

Both ports are HDMI version 1.4, and there is no eARC support , which means no streaming of lossless audio formats such as Dolby True-HD or DTS HD Master Audio. Finally, there is no Wi-Fi in the SL6Y, and all wireless connectivity of the device is limited to Bluetooth 4.0 (SBC and AAC).

The LG SL6Y soundbar, which is longer than the SL5Y, looks better with 49 ″ and above TVs. The extra length gave LG the ability to add a center channel, which definitely improves dialogue clarity. Plus, due to the length, the soundstage offered by the SL6Y panel has expanded.

The SL6Y soundbar is extremely easy to set up and calibrate, supports Bluetooth streaming and high-resolution audio playback, and has the ability to expand the system to full 5.1.

The unit comes with DTS Virtual: X support, which can help a little when it comes to surround sound. All in all, the LG SL6Y is a very good option if you want to pair your large TV with a fairly cheap soundbar that is easy to set up and use.