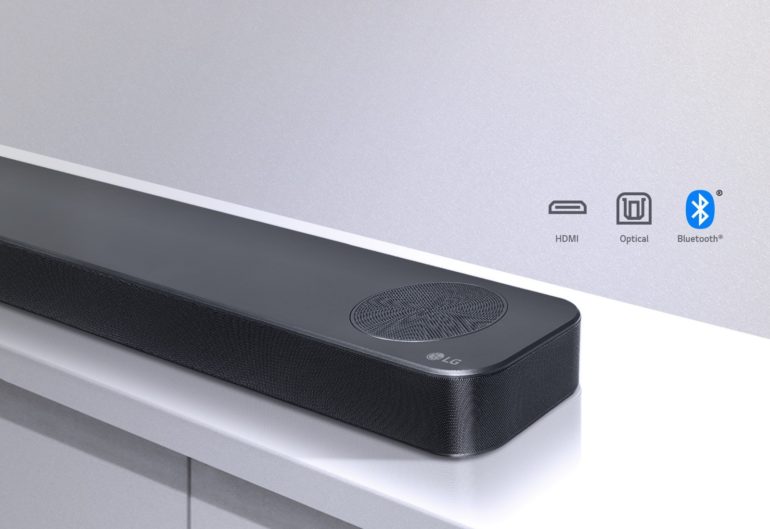 By analyzing the current trend of sound devices and their current use with 4K TVs, one can conclude that the soundbar market has grown. There is now a huge selection of models from budget to powerful soundbars with Dolby Atmos support.

The LG SL8YG soundbar is one of the new products of 2019. It combines a good combination of radiators and a subwoofer package. Consider the LG SL8YG review, as the recent version of the LG SL8Y was quite popular.

Like the previous SL8Y model, the new SL8YG soundbar is in the middle range among similar devices from LG. This is not the top-end version of 2019, because the manufacturer has an SL10YG built according to the 5.1.2 scheme. Unlike the older model, the SL8YG lacks left and right side channels, which leads to a lower price for the end user.

But you can separately purchase additional LG SPK8 wireless emitters and add to the SL8YG. In this case, you will receive a five-channel system – this will be the best option for the price. It is worth noting that the LG lineup has the SL9YG , built according to the 4.1.2 scheme, in this version there is no center channel, but the surround speakers are preserved.

The final price of LG’s expandable system to 5.1.2 SL8YG is not a final factor in purchase. The soundbar is a little over a meter in size, so it is aimed at TVs from 49 inches. But this does not in any way restrict the user from design delights when using the device outside the home theater package.

The “bar” looks very similar to the previous models, especially in the part of the pair of speakers located upwards. They are integrated on the left and right side of the box, made of gray-matte plastic. The upper speakers are decorated with a round mesh grille. At the front, on the front, there is an LED display. It is located slightly to the right of the center of the bar.

This indicator placement is caused by the installation of the center channel speaker. A couple of front channels received tweeter and midbass. At the same time, the Atmos unit is provided with central 2.5-inch emitters. The SL8YG soundbar has a total output power of 440W including 220W wireless subwoofer.

The LG sub is equipped with a 7-inch woofer. Its location in the body is back. Why the manufacturer chose this particular configuration of the subwoofer is unclear. On three sides, the sub is draped with black fabric and a gray top, on which there is nothing at all, not even a logo. The appearance of the sub’s construction does not give the impression of “power”, but it is assembled well.

What is the difference between SL8YG and SL8Y raises a natural question when buying a soundbar … Let’s reveal this secret as well. The manufacturer deliberately added “G” to the model designation, which means the integration of the soundbar with Google Assistant. This makes it possible to use the soundbar with other Google gadgets in your home. In addition, the soundbar is equipped with Google ChromecCast and a Bluetooth channel.

The SL8YG acoustic panel comes with a remote control. It is medium in size with large volume keys. Separate buttons are dedicated to functions (source selection) and mute. In the presence of a button for going through the presets of the sound “Movie, Music, ASC, Standard and Bass”. Additionally, there is a channel level control, which is useful for adjusting the power of the center or height channels of an entire sound system.

The sound quality of the SL8YG in relation to the LG SK10Y is not much worse. Bold confident sound with a good amount of bass, especially in large-scale TV scenes. At certain points, one can feel the jitter / vibration of the sound space created by the SL8YG subwoofer. Clear speech details are always heard in almost any content.

When working with native DTS: X, the sound is deep, there is a falling (reflected from above) stream. The sound of the front L / C / R drivers has excellent separation. The “Sound Effect” and “EQ” settings add dimension and perspective to the sound coverage. Reflected sound is a separate topic of conversation. It’s not just the device itself, whether it’s an advanced soundbar or a regular 2.0 stereo, but also where you place the components of the sound system. Moreover, here you should take into account the peculiarities of your premises.

Listening to Dolby Atmos demos through a test disc indicates that a properly installed SL8YG completely envelops the listening position at standard ceiling heights. Of course, the sound will be better if additional rear radiators are used.

However, as standard, the SL8YG is capable of mixing and correctly manipulating various effects that cannot be achieved with two-channel systems. Not those old home theaters anymore, but something else … The soundbar, as a device as a whole, offers much more possibilities for user customization (if we are not talking about games).

With standard sources, it is recommended to set the ASC (Adaptive Sound Control) mode and standard presets, switch to the “Movie” or “Bass Blast” mode. When movies are played back in this configuration, the projection and scale of the soundstage is increased.

All presets can be activated with surround mode on or off. Some will find the activation of this mode a little difficult, since the activation occurs with a long (three-second) press of the equalizer key on the remote control.

This option is preferable for normal stereo reproduction. If you want individual 2-channel playback (no center channel), you can use the Music Mode, Standard Sound, or ASC modes with surround off.

Varying with the SL8YG’s sound modes and finding the best position for the system doesn’t quite match “Plug-n-Play” systems, but that doesn’t mean you’ll be stuck with the initial setup. Supported DTS: X and Dolby Atmos, together with 4K HDR PassSthrough, let you play nearly your entire UHD collection properly.

In short, at the moment there is real competition from Samsung, Sony and other companies at this price point among soundbars. But the LG SL8YG considered in the review copes with the task perfectly. A complete sound system based on a 3.1.2-channel scheme is shown in the figure below.

What do the numbers 3.1.2 mean? Everything is very simple here – the sum of these numbers is the number of individual channels (not speakers). This system has 6 channels (left side of the picture). As we can see in the diagram: front left, front right, front center, top front left, top front right and low frequency (aka subwoofer).

Arrangement of channels in volumetric space in the image on the right. Note that there are channel emitters on the ceiling: upper front left and upper front right. In the LG SL8YG soundbar under consideration, the emitters of these channels are built into the body.

Therefore, the location of the soundbar should be chosen so that the top of the bar is directed towards the ceiling (no shelves above the soundbar). The recommended installation angles of the radiators in relation to the listening position are shown in the picture. As a guideline, the Dolby site has examples of installations ranging from 2.1 to complex 11.1.8 sound systems.

Physical connections: One HDMI input (this is 4K HDR pass-through with Dolby Vision support) and HDMI output with ARC. In addition to the main ports, there is an optical audio input and a USB connector. Wi-Fi channel for connecting external emitters.

Despite the price tag, this LG soundbar is an entry-level soundbar. The closest competitors are Samsung HW-Q70 and Sony HT-ZF9 .

Of course, the sound scheme 3.1.2 is not capable of completely covering the entire space, but this remark is true “for a professional ear”. In general, the sound delivery is energetic and full-range. LG SL8YG has only one HDMI input and you shouldn’t forget about it. Although in many such devices, the manufacturer considers the number of inputs to be optimal.

As you can imagine, LG’s SL8Y review will be completely similar, but without the letter “G”, which in turn means the lack of support for services from Google. Maybe this state of affairs suits you completely, and buying an LG SL8Y would be the best option.