Of all the soundbars in LG’s 2020 lineup, the SN7Y may be the most intriguing. Soundbar LG SN7Y – 3.1.2-channel soundbar with support for a large number of audio formats, including Dolby Atmos and DTS: X. At the same time, the soundbar has a price that is much lower than the flagship models from the same company. The system lacks rear speakers for true surround sound.

As a result, SN7Y faces serious competition from companies such as Samsung, Vizio and Sony. Despite this drawback, the panel in question is quite serious competition for these panels in its price range. In this LG SN7Y review we will try to identify the strengths and weaknesses of this panel.

Unlike the flagship model LG SN11R, the LG SN7Y soundbar is 89cm wide.Almost the same size as the 2020 Sony HT-G700 . Despite its small width, the panel looks like an expensive product due to its smooth surface. The SN7Y soundbar is equipped with speakers for left, center and right channels.

There is also a pair of speakers with upward sound to provide the height channels of the 3.1.2 system . LG once again did not reveal the details of the speakers themselves, except that each has a power of 30W, and the power of the high-altitude speakers is 35W each. The included wireless subwoofer weighs approximately 7.7 kg.

This weight is very close compared to Sony’s 7.25kg wireless woofer. It is disappointing that the user will not be able to get the 5.1.2 channels that the Vizio soundbar has at the same price. This is because rear speakers are not included.

There is an option to purchase an additional set of rear speakers from LG as an add-on to the system, but then the price will increase by $ 180. The remote control is identical to the one supplied with the SN11R. Both remotes lack the Google Assistant button. The reason is that, sadly, the SN7Y is not equipped with wireless Wi-Fi.

The only benefit of not having rear speakers or Wi-Fi is the ease of setup for this system. There are no wires to connect between the panel itself and the subwoofer as in a traditional Vizio system. There is also no app to download and configure soundbar settings. The SN7Y is much easier.

Once turned on, the soundbar and subwoofer will connect to each other wirelessly. This connection has already become the standard for most wireless accessories. Of course, the soundbar must also be connected to the TV. Once this connection is established, you can start using the system. The subwoofer can be placed anywhere in the room.

As with the SN11R, LG has done an admirable job of setting up the SN7Y to handle most audio files. The panel supports 24-bit / 192 kHz high-resolution audio, as well as an extensive list of surround sound formats including Dolby Atmos, DTS Digital Surround, DTS: X, Dolby Digital Plus and more. The soundbar can also accept FLAC, WAV and AAC formats, including via USB.

In addition, the panel has a variety of preset sound modes to choose from, including AI Sound Pro, Standard, Music, Bass Blast, Bass Blast +, Movie (Dolby Surround), DTS: X, and Dolby Atmos. Simply put, this system supports many functions and many ways to customize the sound for every taste.

LG’s partnership with Meridian Technology appears to have produced fruitful results. Audio when listening to music and watching movies sounds great. While the SN11RG sounds a lot nicer, the SN7Y also has a lot to offer for the price.

When watching movies, it’s amazing how realistic action and clear dialogue are effectively combined. It is speculated that most users will love this soundbar even without the rear speakers. When watching movies, it is best to set it to Cinema because it sounds better in this mode than with standard settings.

On the other hand, the subwoofer for the SN7Y is not particularly impressive. Cannon shots in naval battles sound uncertain. However, the overall sound of the Sony HT-G700 and LG SN7Y is on par. However, the detailing of the low frequencies of the Sony subwoofer definitely beats LG’s woofer. 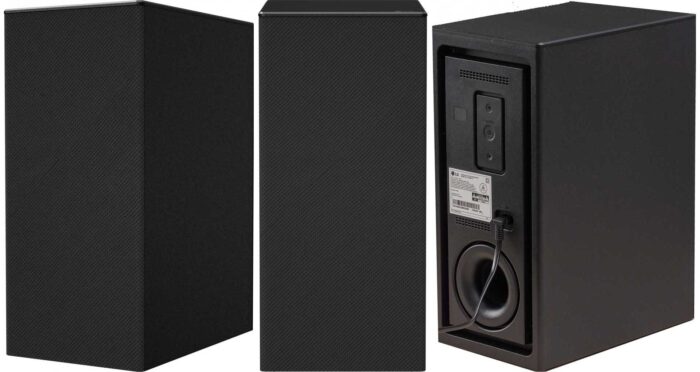 If we consider the work of the LG SN7Y soundbar in Dolby Atmos mode, then this moment deserves a separate section. A quick turn-on of the SN7Y Dolby Atmos Demo Mode is achieved by holding the “F” button on the remote for five seconds.

Various effects of birds flying, raindrops falling from above and thunder cracking in the sky sound very natural. This proves once again that the soundbar is following in the footsteps of its more expensive siblings in terms of Atmos playback. Of course, more expensive models sound better. But the way the SN7Y plays Atmos at this price is certainly impressive.

If the Sony HT-G700 has more bass, then the SN7Y should be preferred when listening to Dolby Atmos content. The HT-G700 has only front speakers and uses audio processing technology to create a convincing 7.1.2 virtual experience. SN7Y works like a traditional home theater system with actual headroom or ceiling speakers. The LG SN7Y Speaker Bar has one HDMI HDCP 2.3 input and a corresponding HDMI output that supports 4K pass-through, Dolby Vision and HDR10. Sony HT-G700 has the same number of outputs. However, HT-G700 supports eARC and LG is limited to ARC channel. The SN7Y bar also has optical audio input and USB input.

Should you buy the LG SN7Y

The LG SN7Y has a few flaws that its competitors don’t, but it’s still a very good sounding soundbar that plays Dolby Atmos confidently at such a low price. The balance between price and quality is important.

If we analyze this criterion, then the panel in question is slightly better than the SN11R. The latter no doubt sounds better due to its superior sound and performance. However, price matters too. Therefore, in our opinion the SN7Y provides the best return on investment.

It remains to talk about the alternatives. The $ 500 Vizio 5.1.2 system includes Wi-Fi and a pair of rear speakers for the same price, while the $ 500 Sony HT-G700 has a more powerful subwoofer. But when it comes to Atmos mode, LG’s SN7Y delivers one of the very best sounds in this price range.

In other words, while the SN7Y’s subwoofer isn’t particularly impressive and Wi-Fi is lacking, it’s a soundbar that should be seriously considered if you want quality Atmos for little money.