The Samsung HW-Q600A soundbar is a novelty in 2021 made according to the 3.1.2 CH scheme. It comes with a separate subwoofer. The soundbar has a balanced sound profile, which is suitable for listening to a variety of types of audio, although bass is difficult.

In a similar lineup in 2021, there is a pair of soundbars of a class higher. These are Samsung HW-Q700A and Samsung HW-Q800A. Like other Samsung soundbars from the 2021 lineup, the QA series offers a variety of advanced audio customization features, including a graphic equalizer and presets. But let’s return to the Samsung HW-Q600A review and try to deal with this “average”.

Interesting settings in the HW-Q600A include Pro Game Mode, Adaptive Sound, and Samsung’s built-in Acoustic Beam technology. The rationale behind this is that there are many openings in the bar body to create a more dynamic panoramic soundstage. This is advertised as “to create a more immersive sound.”

In addition, the HW-Q600A bar features Q-Symphony technology, which improves sound reproduction when connected to a compatible Samsung TV. Recall that the junior models HW-A450 , HW-A550 and HW-A650 did not have it. On the other hand, the HW-Q600A soundbar still lacks additional features such as voice support and Wi-Fi and Apple AirPlay2 compatibility.

The HW-Q600A Soundbar is a sleek and simple soundbar with a design similar to the Samsung HW-Q700A. The top and front of the bar are covered with a metal grille, while the rest of the bar is made of black plastic. The subwoofer is made of wood, there is an external power port at the back, and a not very strong fabric at the front.

The Samsung Q600A soundbar model does not come with any satellites in the original packaging. But it is compatible with the Wireless Surround Kit, so they should be purchased separately. The Q600A soundbar itself is a bit wide, so it probably won’t fit between the legs of a 55 ” TV.

But on the other hand, he is not very tall and will lie down calmly in front of the TV. The dimensions of the bar are 98×5.8×10.5 cm. The PS-WA67B subwoofer from the kit has the same size as the subwoofer of the Samsung HW-Q700A model. Its dimensions are about 20x35x30 cm. The wireless design of the subwoofer allows it to be placed anywhere in the room.

On the back of the Q600A soundbar, there are two compartments for inputs and a power cable. Recall that the 24 volt power supply is carried out in a separate adapter. You can install the brackets on the wall and hang the bar on them. The back of the subwoofer has a power input and a Bluetooth pairing button.

The soundbar Samsung Q600A has a very good midrange response. Out of the box, it has a neutral yet balanced sound profile, suitable for listening to a variety of content. There is a slight additional effect in the low frequency range. However, this soundbar is not capable of reproducing loud bass, which will disappoint picky users.

If you need a rumble in action films and heavy music, then you should look for something more solid. The Samsung HW-Q600A soundbar has many sound customization functions. One such feature is the graphic equalizer with presets and bass and treble settings.

For stereo sound, the HW-Q600A has a decent performance. The soundstage is perceived to be about the same width as the bar itself, but there are no “enhancers” for expanding the base. However, Samsung’s HW-Q600A acoustic panel has good focusing so that subjects are precisely located.

The Q600A acoustic panel has very good dynamics. The overall sound power is sufficient for listeners using the bar in a large room. No large distortion is observed when played back at maximum volume. The Q600A soundbar has excellent center channel performance.

With a dedicated channel, sound scheme 3.1.2 can more clearly and accurately reproduce dialogue in vocal-oriented content. The frequency response of the center channel is slightly overwhelmed. But this shouldn’t be too noticeable, as usually a lot of bass isn’t played through the center channel.

When it comes to expanding to 5.1.2, the Samsung Q600A has poor performance. To reproduce correctly with this setup, the soundbar must first convert the surround content to stereo. Therefore, volumetric “figures” such as voices and footsteps will not be so clearly and accurately localized in the soundstage.

About Atmos. The Samsung Q600A acoustic panel disappoints with its performance. Of course, the bar has built-in speakers that channel sound from the ceiling and back towards you to create the impression of height. Unfortunately, this will not sound as clear and real as the true discrete localization created by the off emitters in the home theater. The volume of these channels is moderate, which is disappointing again. 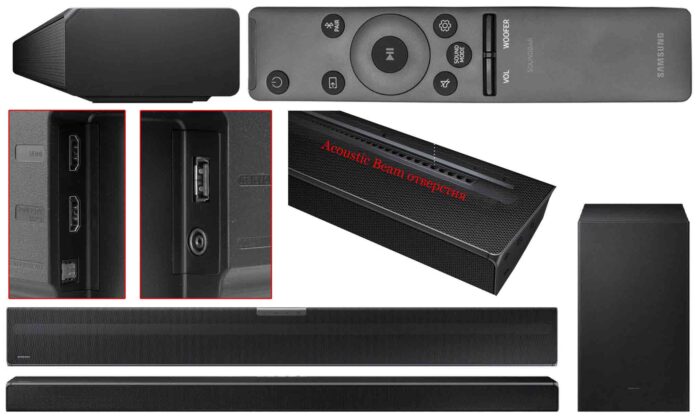 The Sound Enhancer is Acoustic Beam technology that lets you “immerse yourself in sound”. And one more function is Tap Sound. According to advertising, it allows you to play music from a smartphone, when controlled from a soundbar. But this feature has not been tested.

The Samsung HW-Q600A soundbar contains several physical inputs. One of them is a full HDMI input, which allows you to connect the soundbar to a variety of devices. But even in this model, like the junior bars of this manufacturer’s 2021, there is no AUX port. HDMI output with ARC, support for Dolby Digital and DTS. Despite the fact that the specification includes a 4K Video Pass (limitation for viewing 4K video), there is support for HDR 10+.

Cons
Does not support Wi-Fi (AirPlay and Chromecast).

The Samsung HW-Q600A soundbar impresses with dialogue and TV shows. With a dedicated center channel and balanced mid-range, it can reproduce voices clearly and accurately.

There is even a corresponding preset “Adaptive Sound” for this. The soundbar is quite loud and is suitable for a large room. There is Bluetooth compatibility with podcasts and audiobooks in the smartphone, but there is no Wi-Fi support and, accordingly, Chromecast or Apple AirPlay.

In preparing the article, materials from https://ultrahd.su/zvuk/samsung-hw-q600a-obzor.html were used. Visit article here.