The Samsung HW-Q60T soundbar from the 2020 Samsung lineup has a 5.1 sound system. This is the next generation of the Samsung HW-Q60R model. Like its predecessor, the setup does not use dedicated dynamic amplifiers, nor does it support Dolby Atmos content.

The soundbar of the Samsung HW-Q60T looks almost identical to the Samsung HW-Q60R from the previous generation. The body is made of high quality black plastic. A metal grille covers the front and top of the panel. The dimensions of the panel itself (W x H x D): 980 mm X 58 mm x 105 mm. The subwoofer is made mostly of wood. The sub speaker is covered with a cloth that can collect dust or tear.

The subwoofer looks like a mid-sized work computer, but is slightly wider. The sub can be placed anywhere in the room, as it connects to the panel wirelessly. Even though the panel itself is shorter than the Samsung HW-Q60R, the acoustic panel will most likely not fit between the legs of a 55-inch TV. The Samsung HW-Q60T soundbar has a small display located on the right side of the panel behind the front grill. The display can show the connected input, volume level and settings. Since this is a small screen, you may need to scroll to read the entire message on the display. 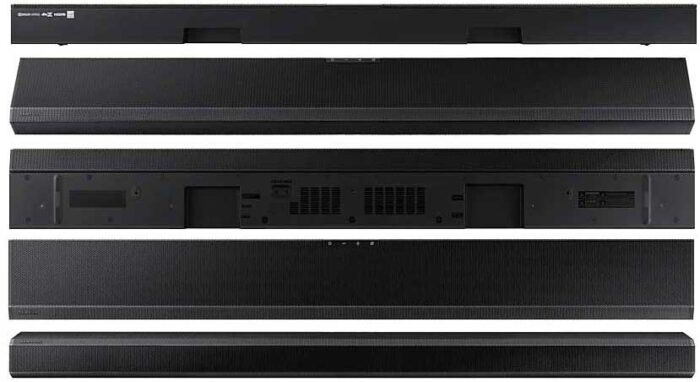 The HW-Q60T soundbar has a decent stereo frequency response. The bass sounds pretty good, but a decent kick is a little lacking. Minor problems are also observed with high frequencies. For most listeners, however, these shortcomings will not be noticeable, since the rest of the system is fairly well balanced.

The stereo soundstage is wide. It is not less than the size of the panel itself. On the other hand, the panel itself does not contribute to making the scene even wider. Audio sounds in focus. The objects from where the sound comes from are located in their own place. The HW-Q60T soundbar can get quite loud, making it suitable for large rooms or house parties.

However, at maximum volume, there is slight distortion that may not be noticeable to many listeners. 5.1 sound has a high quality center channel. Its configuration has a dedicated center speaker that reproduces clear vocals. The speaker is very powerful, but the sound should also be loud enough.

Pseudo Atmos audio doesn’t feel as real and immersive as the surround sound coming from real speakers. The panel does not have ceiling channels, and therefore does not support Dolby Atmos. The Q60T soundbar has decent sound enhancement features. Unlike other soundbars from the same manufacturer, the soundbar lacks room correction.

However, this soundbar is one of the first in the lineup to feature presets like Game Pro and Adaptive Sound, in addition to a 7-band graphic equalizer. The Q60T also has a surround mode, but you need to enable this option to watch 5.1 content. The Q60T has an HMDI In port that supports common formats used in a wide variety of content such as streaming platforms or Blu-ray discs. The port also allows the soundbar to be used as a hub for devices such as PCs and TVs. There is also a USB input, which is quite commendable.

There is an HDMI output and an optical audio input. The soundbar only supports Bluetooth wirelessly. Options like Wi-Fi, Ethernet port and Apple AirPlay2 are missing. The soundbar HDMI ARC port supports most common soundbar formats such as Dolby Digital and DTS.

As we already reported, it is possible to listen to 5.1 surround content such as Blu-ray discs or streaming media. To do this, you need to activate surround mode on the soundbar. Otherwise, the sound will be 3.1. The Q60T acoustic bar can support Dolby Digital and DTS content via optical audio input.

The Samsung HW-Q60T considered in the review is suitable for mixed use. The slight lack of bass and treble does not make action movies sound very exciting. However, it is possible to customize the sound using a graphic equalizer or presets.

As for the center channel, the soundbar has a balanced sound. This is very clearly seen in dialogues and musical programs. If you are hosting a party at home, this soundbar may sound loud, but the bass will be slightly distorted. In addition to all of the above, it is worth adding that in order to save energy, the Q60T has an automatic shutdown function.