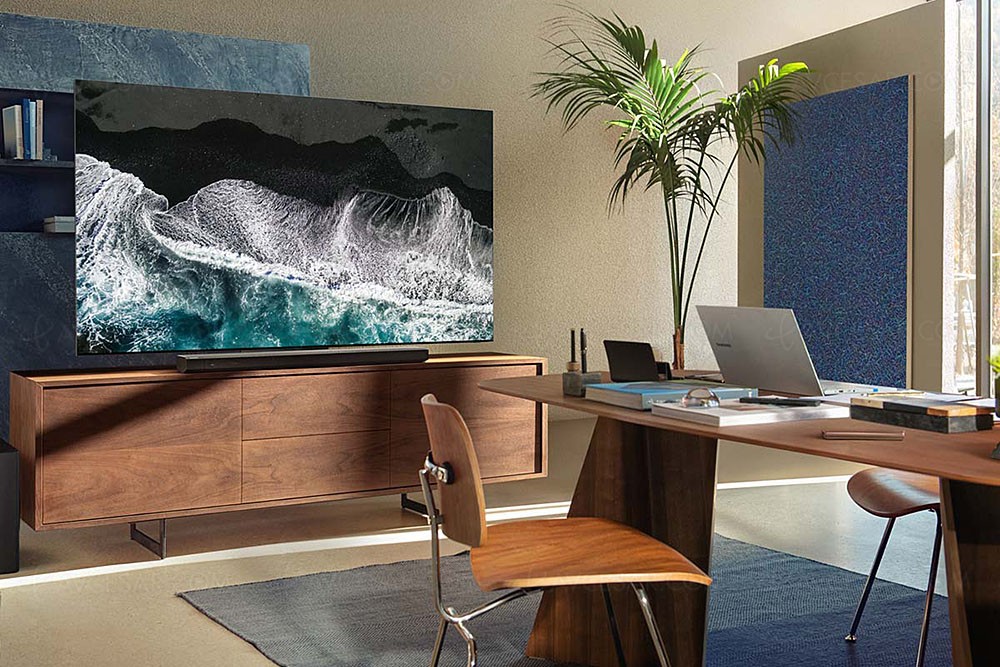 The HW-Q800A Soundbar is Samsung’s new 3.1.2 Soundbar in 2021. This acoustic panel is from the Cinematic Soundbar series. It is comparatively expensive due to Dolby Atmos and DTS: X support for excellent viewing of “powerful” movies.

The Samsung HW-Q800A soundbar is built according to the 3.1.2 CH scheme and is designed to reproduce Dolby Atmos soundtracks . Most of this content is distributed via streaming services, but the HW-Q800A can also handle audio from consoles and discs.

On a positive note, there is widespread support for surround sound codecs. In addition, there is support for DTS codecs, including DTS: X. To make Atmos or DTS: X soundtracks sound good, the Samsung Q800A has two overhead speakers in addition to the three front speakers.

The HW-Q800A soundbar costs less than 800 euros, and for that amount the user gets an “adult soundbar” with a wireless subwoofer. By the way, the price is at the level of its predecessor HW-Q800T (at the time of the start of sales in 2020). Added to this is the ability to expand this Samsung Q800A acoustic bar with wireless speakers for the back of the room. Separately, such acoustics Samsung SWA-9500S can be purchased for about 270 euros.

Recall that when ordering the Q800A soundbar via the Internet, you should distinguish between the models. Indeed, the name differs from last year’s T-model by only one letter, and last year’s Q800T soundbar looks almost identical and is also a 3.1.2 CH model.

However, there are a few differences that make the HW-Q800A soundbar more interesting than the older model. After all, the Samsung Q800A soundbar has AirPlay 2 . This means advanced streaming applications. Another novelty is the Auto Level function, which smooths out the difference in volume between content.

This is not so important when watching TV, but if you apply it to watching a lot of YouTube videos, then this feature will be useful. Samsung has announced that the Q800A soundbar will receive a significant update in June 2021 and Chromecast functionality will be added. This will greatly expand your streaming capabilities.

The angular design of the HW-Q800A soundbar is already familiar to us. Not only because this 2021 model is nearly identical to last year’s variant. The Samsung brand has long adhered to an identical design language in soundbars, which makes their products highly recognizable. Samsung soundbars usually look sleek and modern.

Looking directly at the soundbar of the HW-Q800A, we see a fine metal grille design. No buttons or display are visible, although they are. The keys are located at the top opposite the back, a small screen is hidden behind a grill on the right side.

The screen with white letters appears briefly when you operate the remote control or when you start a video in a certain surround sound format. The rest of the time, the display is inactive, and does not distract attention while viewing. The speakers built into the soundbar are also invisible.

At 98cm wide, the Samsung Q800A soundbar is a few centimeters smaller than the 55 ” QN95A Neo QLED TV. Note that the HW-Q800A soundbar has the Q-Symphony function on board. In this case, the TV speakers do not turn on as usual. They play along with the Q800A’s acoustics, and the 3D sound experience is enhanced. This function can be turned on and off on the TV. However, Q-Symphony only works with newer Samsung TVs that support it.

Since the Q800A acoustic panel contains overhead speakers, you should not slide it under the TV or into a cabinet niche. This is worth considering. On the other hand, the HW-Q800A soundbar lacks speakers on the sides. This means that the soundbar will not perform worse if there is a cabinet wall on the left or right. It is possible to install the bar on the wall; for this, mounts on the body are provided.

In terms of connections, the Samsung Q800A soundbar is mid-range. The niche in the back has an HDMI eARC port for connecting to a TV and one additional HDMI input for a device like the Xbox. Side note: if you hang up the Xbox Series X on this port, you find out that it’s not HDMI 2.1. That is, you can play up to 4K @ 60Hz instead of 4K @ 120Hz.

In addition, optical input and Bluetooth are available. In theory, BT can be used to wirelessly connect to a TV, but then only a stereo signal will come out. Better to use HDMI eARC, then you can customize the Samsung Q800A soundbar optimally, such as Netflix’s Atmos mode. The supplied subwoofer is larger than last year’s version. Since the sub is wireless, it can be placed anywhere in the room. The Samsung subwoofer limits high frequency reproduction, making it easier to place in a room. Note that the subwoofer also reproduces higher tones than the ideal 80 Hz.

Therefore, when located far from the TV, you can sometimes hear fragments of dialogue at a strange angle. Therefore, the sub should be placed near the front of the TV screen. Let’s clarify that in the subwoofer the woofer is located to the side.

In any case, the subwoofer is powerful enough and sounds “fat”. Perhaps this is because Samsung has been paying a lot of attention to its subunits in recent years. The fact that the sub handles music well is, of course, a plus for many films and TV shows.

You get used to good things quickly. For example, the HW-Q800A soundbar can be configured for high-quality playback using the SmartThings app. It is not just an application for this soundbar, but a whole platform to control most of Samsung devices. By the way, there are quite a few other smart home devices that support SmartThings.

You can quickly connect your Q800A soundbar to your network via the SmartThings app. When a compatible Samsung TV is already connected to your home network, the TV automatically sends data to the soundbar. Fine!

In addition to control via SmartThings, you can operate the supplied remote control. This is a familiar, slim, ergonomic remote from Samsung. Conveniently, you can quickly adjust the volume with this remote and separately adjust the subwoofer level.

The main criticism of Samsung soundbars in 2020 was that there was little room for “third-party” music playback. Spotify Connect and Bluetooth streaming, that’s it. In 2021, the Korean manufacturer added AirPlay 2. The Samsung Q800A soundbar cannot be said to be a streaming miracle, but if you have an iPhone, iPad or Mac then AirPlay really comes in handy.

Music playback from any music service is possible if they support iOS apps. But on the other hand, whoever has an Android smartphone or tablet AirPlay is not that useful. By the way, there is voice control, but only through Alexa. Therefore, some languages ​​are not supported. But there is good news – for Android devices, with a software update, a Chromecast will appear on the HW-Q800A (June 2021).

It should be remembered that since the advent of eARC, TV and soundbar manufacturers have looked at the screen as the center of home entertainment, including music. After all, it is possible to play concerts through the TV. For example, through an application running on a Smart TV system (Apple Music on QN90A ).

When listening to music, it is worth choosing the correct sound mode. Indeed, in standard mode, the sound is very dull. After correct adjustment, the sound becomes a little cleaner and more pleasant. There is more to the preset sound modes than just a small tweak to the sound. The soundbar handles them differently depending on the sound mode and the input signal.

For example, if you are playing music in stereo, only the left and right speakers and the subwoofer will play in standard mode. Adaptive Sound or Adaptable Sound will up-mix to 3.1.2 CH.

It’s worth purchasing additional rear speakers here and we get a mix down to 5.1.4 CH. Let’s take a look at the table below. As you can see, Standard should be selected for pure stereo. By the way, if you turn on Q-Symphony, there will be only two sound modes: Adaptive and Gamer Pro.

One of the new features in the Q800A soundbar is “SpaceFit Sound +”. This new product is used with a compatible Samsung TV, like the Q-Symphony. When enabled, a one-shot test tone is emitted to measure the properties of the room through the TV microphone. The bar will optimize its settings based on this measurement.

Bass is thickened, for example, due to the shape of the room, or slightly reduced so that the sound coverage is more balanced. Although the manufacturer refers to this as a novelty, we know of similar calibration functions in other soundbars. In general, all advanced soundbars do this by offering added value.

Samsung HW-Q800A model has many features in common with its predecessor last year. In the end, the music reproduction of the HW-Q800A is good, you can count on powerful notes. They clearly highlight the center channel and dialogues.

Sometimes it is necessary to adjust the woofer using the remote control, but this is not difficult. An important addition is the presence of AirPlay 2, as well as Chromecast support besides Bluetooth streaming. This makes the HW-Q800A soundbar a streaming omnivore. And this is also a plus for a potential buyer.

In preparing the article, materials from https://ultrahd.su/zvuk/samsung-hw-q800a-obzor.html were used. Visit article here.