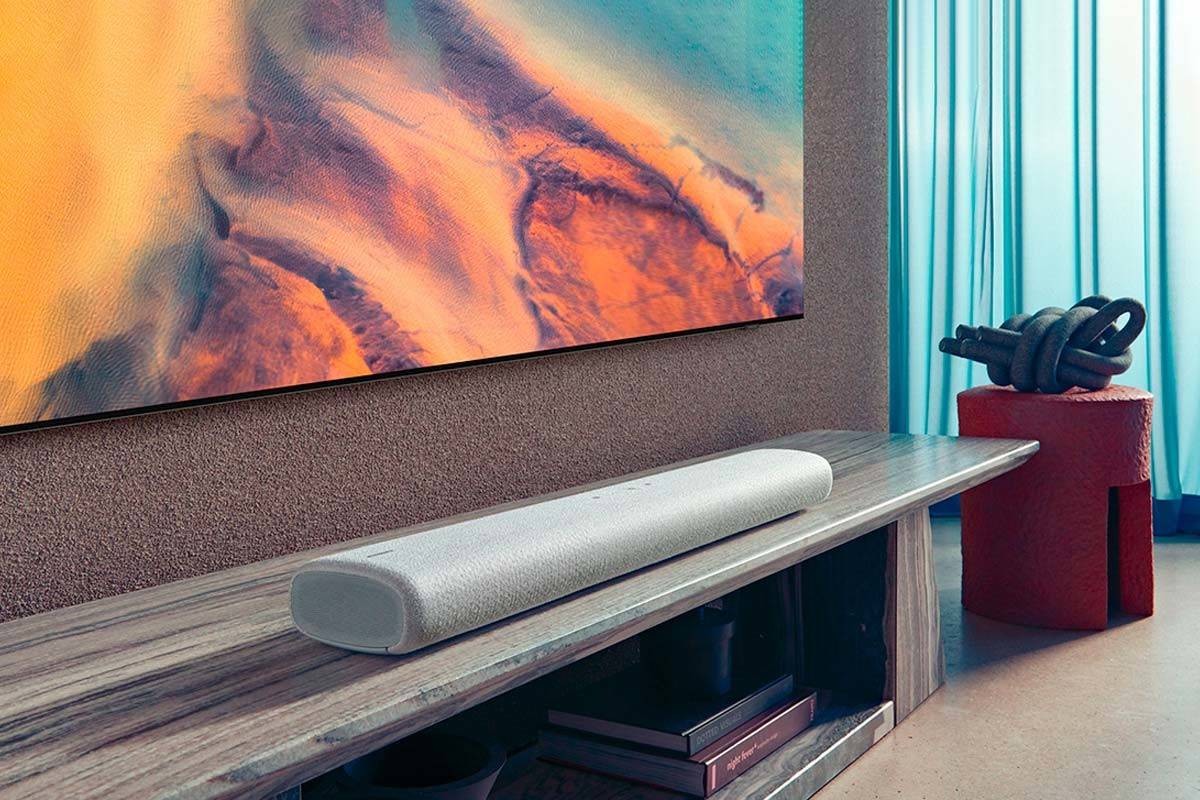 Samsung has launched the HW-S61A compact soundbar with voice assistant and technology designed to expand sound beyond its small footprint.

The Samsung HW-S61A soundbar boasts a new center channel, improved connectivity and audio processing. The HW-S61A version has the same features as the S60A, but it has a more attractive light gray color. In this Samsung HW-S61A review, we’ll take a look at the pros and cons of the S61A series soundbar to see if it’s worth buying.

The gray version of Samsung’s HW-S61A soundbar looks almost identical to the previous
HW-S60A (or HW-S61A) and doesn’t differ in size or shape from the 2020 HW-S60T . Wrapped in fine Kvadrat fabric (gray or black), there is a hexagonal mesh at both ends of the acoustic panel that covers the side speakers.

Also noteworthy is the lack of a “display”. The Samsung S61A soundbar is equipped with a series of LED indicators that flash in a colorful sequence (white, cyan, green, blue, red). The changes made are minor.

Volume up / down, multifunctional button, microphone button and LED indicator are located on the front panel. This makes it easier to operate when viewing while seated. Since the HW-S61A emits a sound to the sides, you need to clear the edges of the soundbar from any nearby objects. Wall mounting brackets are included. 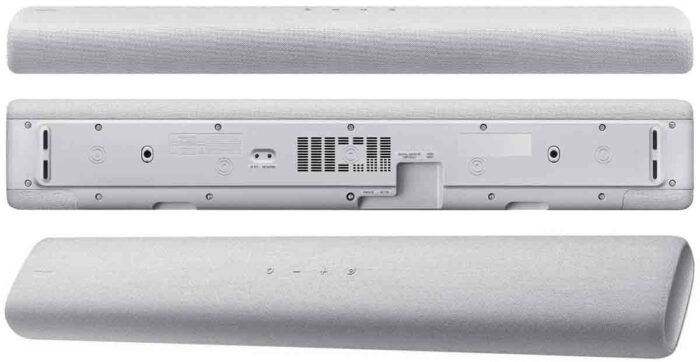 The HW-S61A is paired with a remote control, although the lack of a traditional display means there may be some confusion with the feedback. In the absence of a display, you can rely on an LED indicator to track changes. However, there is no way to know exactly how much the volume level has changed.

For example, when setting up the center channel, there is no indication or verbal confirmation of the level at which the sound is set. Therefore, before turning off the soundbar, it is best to keep the volume at a minimum. Soundbar is compatible with SmartThings app. The bar can be set up and connected to Wi-Fi.

There’s also the option to provide access to common playback controls, equalizer settings (basic and advanced), sound modes, Alexa setup, Spotify, and Bluetooth pairing. There is one very useful option in setting up SmartThings with a Samsung TV. It indicates where is the best place to place the soundbar.

The downside to the design is the fact that the Wi-Fi connection often blocks the HDMI port. Therefore, when turning the TV on and off, it is not always possible to wait for the synchronized disconnection / activation of the soundbar. SmartThings, however, covers most of the remote control’s capabilities.

It also has the ability to adjust the center and side channel levels. In addition, devices such as Philips Hue can be controlled with SmartThings . The S61A soundbar boasts many other sound reproduction options. For example, built-in technologies such as Spotify Connect, Deezer and TuneIn.

If you connect to the Amazon system, there will be Alexa support. But, if a loud sound is played on the soundbar at the same time, then the microphone may have difficulty picking up voice commands. Anyone with a compatible Samsung Galaxy phone can use the Tap Sound feature. This feature acts as an alternative to Chromecast.

One new and highly anticipated feature is the presence of Apple AirPlay 2 for streaming audio from an iOS device or for grouping it with other AirPlay speakers. This expands the connectivity of the soundbar, closing the gap between it and the Sonos Beam. It’s just good to have it instead of relying on Bluetooth.

If you plan to build a larger sound system, the Samsung HW-S61A Soundbar can be connected to the SWA-W500 Wireless Subwoofer and SWA-9100S Wireless Rear Speakers. The latter are much easier to find on the Internet than Samsung’s earlier rear speakers.

First of all, the HW-S61A soundbar is an improvement over the previous model. It features a new center channel alongside the existing tweeter, woofer and side speakers. The new center channel handles dialogue with greater care and overall movie sound is more confident than its predecessor.

By using the sidebar speakers, Adaptive Sound mode distributes sounds wider than the soundbar length for a great effect. Acoustic Beam technology in the bar increases the pitch of the soundtracks. The height of the object convincingly corresponds to its position on the TV.

The bar also performs convincingly when watching sports, producing wider, louder crowd noise than the standard soundbar mode. Standard mode still looks more solid, especially with dialogue in both movies and music. In this regard, the Adaptive Sound mode can be a loser.

The S61A soundbar handles complex action scenes better. Complex movie soundtracks still don’t play perfectly. The soundbar does add bass, but there should be more bass when hitting. The addition of a center speaker increases the number of channels to 5.0 (seven speakers in total).

The HW-S60T did a good job of dialogue too. However, the Samsung HW-S61A soundbar has a stronger focus in complex movie soundtracks. The S61A has a problem with its voice enhancement function. As the volume is increased, some voices may become sharper and thinner than they should be.

Overall, the Samsung S61A soundbar has a crisp, clear and detailed tone with solid bass. Although the bass does not have as much depth as a soundbar with a separate subwoofer. However, this depth is decent enough to feel some impact. Also, the sound with this system is much better than any TV with two 10W speakers.

The soundbar offers excellent stage clarity and spaciousness. The side speakers spread sound far beyond the width of the soundbar. In addition, a clear tone appears without harshness or hiss. The music sounds very energetic.

Spotify Connect gives you a sense of dynamism with ups and downs. Bluetooth playback is not that good. The high frequencies are not as sharp and detailed, the width of the soundstage is less.

To conclude our review of Samsung’s HW-S61A, we should add that a few design tweaks, additional connectivity and improved audio performance make Samsung’s compact soundbar even better than the Sonos Beam, which sits in the same price range.

Small design changes and the addition of AirPlay 2 help the HW-S61A unleash its compact soundbar potential. When space is limited, the Samsung S Series Soundbar fills it with great confidence.

In preparing the article, materials from https://ultrahd.su/zvuk/samsung-hw-s61a-obzor.html were used. Visit article here.