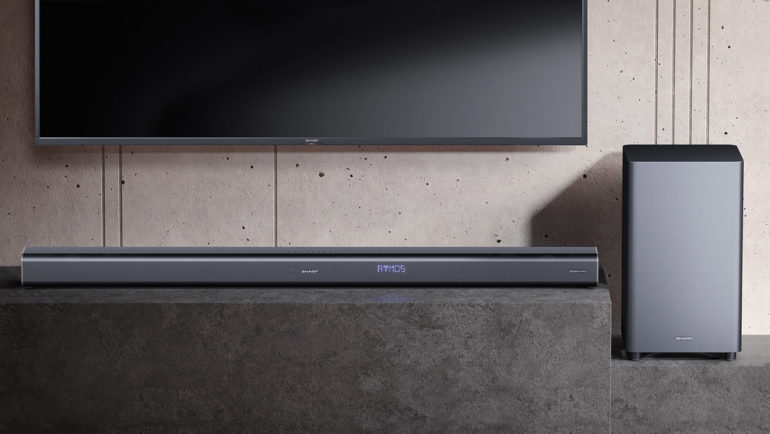 Sharp is here again. The company after suffering in recent years, “became” Japanese again and began to produce some very interesting products. Its goal is not the high (expensive) category, but the introductory one. The company has several sound bars on the market, about 12 models, but the most attractive is the Sharp HT-SBW800. 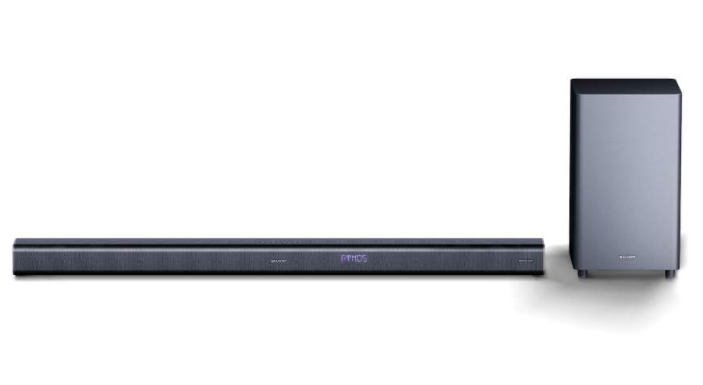 The Sharp HT-SBW800 is a full-length Dolby Atmos soundbar, almost as big as the LG, which makes it suitable for supporting TVs 55 inches and larger. The composition is 5.1.2 channels, without external speakers, but also without network capabilities. Something that proves it and its price.

Inside there are 10 speakers, four used for the front sound front (left, center and right), one at each end (side) and another four (in pairs) as roof channels. The front speakers are full range speakers and are supported by a bass reflex tube that “shoots” towards the listening position, there are no tweets. The sides and ceiling speakers look like a twitter dome (1.2 inches).

Note that the two ceiling speakers are two-way, as they have a tweeter that “sees” a short funnel. We were impressed by the subwoofer which has the same cabin (dimensions and construction) as that of TCL Ray.Danz, uses a larger loudspeaker.

This is a woofer of about 7.5 inches, when TCL uses a much smaller one. The presence of the powerful subwoofer of the sound bar can be perceived in its sound. The SBW800 really… has the nerve to wake up.

At the back we have 3 HDMI ports, ie 2 inputs and an output that also has an “input” ARC (not eARC), to connect our compatible TV. Also, the SBW800, in addition to optics, also has a coaxial digital input, which is rare for sound bars. It also accepts USB sticks for MP3 playback (up to 32GB) and Bluetooth etooth music connection from our mobile phone.

The sound bar is powered by a large external power supply (23V / 3A), comes with an HDMI cable and a sleek remote control. There is no app since it is not networked. At the bottom of the sound bar, at the edges, there are special anti-vibration mats, while in the box you will also find wall brackets. There are 4 equalization presets (Music, Movie, News, Night), increase and decrease bass and treble, surround on / off and display.

We connected the SBW800 to our player with the two outputs, one on the TV and one on the sound bar, selected the movie A Star Is Born at Dolby Atmos and got started.

The sound bar worked with the first one, she immediately recognized that she was accepting Dolby Atmos, she wrote it on her screen, we let her play alone for half an hour and the fun started. The listening position was at three meters and we immediately felt από sounds from the ceiling, an indication that the system was working.

The first thing one notices is the abundant bass that immediately filled the space, we had to lower it. As we lowered the sound level to “20”, it is one of the speakers that at max begin to be under-controlled.

The low ones had energy, attack and forehead, while the front sound field was much better than the cost of the sound bar. Even with music we tested, the SBW800 formed a wide stereo field that will surely lead its owner to listen to music from it as well.

The SBW800 has all the guarantees to claim a place under our TV, it has nothing to envy from the competition in its category. The sound and surround field it creates is what one is looking for… at a movie night or at the premiere of a Netflix series.