The Sony HT-A5000 soundbar seems to be the cheapest speaker system to support Dolby Atmos, DTS: X and HDMI 2.1 at the same time. A 5.1.2-channel audio system with built-in subwoofer is expected to cost around 900 euros. In the following Sony HT-A5000 5.1.2 review, we will look at the main benefits and new built-in technologies of this sound system.

Thus, the Japanese electronics manufacturer is becoming a true innovator in this segment of entertainment. The Sony HT-A5000 Soundbar is a complete 5.1.2-channel system with a built-in subwoofer, optimized for DTS: X and Dolby Atmos 3D sound reproduction .

The Vertical Surround Engine signal processing technology supports audio formats such as DTS: X and Dolby Atmos. To envelop the user in spatial sound, the system combines the sound reproduction of the front speakers and two upward-firing speakers. Viewers perceive audio elements through a ceiling reflection from above. Therefore, there is no need to install additional speakers. 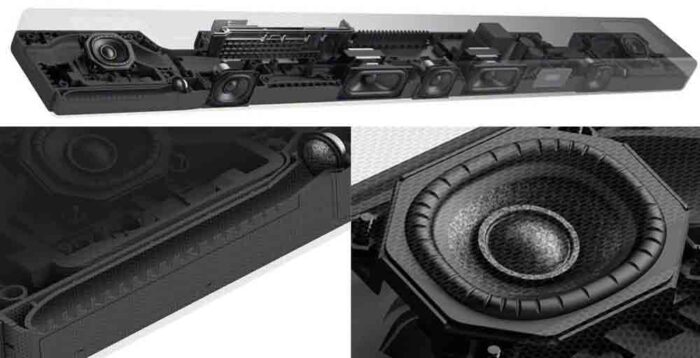 S-Force Pro Front Surround technology takes care of a horizontal sound field and tries to give the viewer a wide and lively sound. Despite its size, the HT-A5000 soundbar looks rather compact. Above all, the low headroom and the built-in subwoofer make this an optimal solution.

However, for these two technologies to work, the soundbar must somehow know how high, wide, and deep the room is. This is achieved by optimizing the sound field.

The system provides access to the microphones built into the soundbar and even lets you adjust the position of an optional subwoofer and / or rear speakers that are not included. Calibration can be started from the main menu immediately during initial setup or later.

Sony’s HT-A5000 soundbar is particularly interesting for its versatile approach. The device measures 1210 x 67 x 140 mm. With such a low height, this unit can be placed under almost any TV. In this case, the panel will not overlap the borders of the image.

Product weight is 6.1. This is not so little. However, it should be borne in mind that the soundbar is equipped with all sorts of technical components. The cabinet has room for a dual subwoofer to deliver deep bass. There are also two upward facing speakers for height information, two side tweeters and three front speakers.

All loudspeakers have a maximized X-Balanced diaphragm. The output power of the system is 450 watts. This value can be increased by additionally purchased rear speakers and a subwoofer.

Many have known for a long time that a large number of speakers and overall performance alone do not produce good, high-quality sound. Naturally, the Sony HT-A5000 soundbar is equipped with multiple signal processing technologies to provide the listener with clear dialogue and deep dynamic bass.

Music lovers can look forward to the DSEE Extreme feature. Its algorithm, based on artificial intelligence technology, analyzes pieces of music in real time and recovers high-frequency ranges that are lost when digital music files are compressed. While we’re on the subject of music, it’s worth adding that High-Resolution Audio support and Sony 360 Reality Audio mode via Amazon Music HD are also supported.

HDMI 2.1 (eARC) and other connectivity

When it comes to connections with other devices, the Sony HT-A5000 soundbar is equipped with almost all the latest technologies. Music and other audio signals can more than conveniently be streamed to the HT-A5000 soundbar via Bluetooth, Wi-Fi, built-in Chromecast, Spotify Connect, and Apple AirPlay 2.

The physical connections are available as optical digital audio output, USB Type A (for high-definition audio files), and two HDMI 2.1 (in / out) connections with an enhanced audio return channel – eARC . Thus, it is possible to transmit 8K / 60 Hz and 4K / 120 Hz video signals, including HLG, HDR or Dolby Vision. The Sony HT-A5000 acoustic panel can also be supplemented with wireless subwoofers or a set of rear speakers. The SA-SW3 subwoofer with 6-inch speaker and 200W power adds bass.

If this is not enough, then the device can be supplemented with a SA-SW5 subwoofer with a 6-inch speaker and a power of 300 watts. You can expand the capabilities of the soundbar to 7.1.2 with a set of rear speakers SA-RS3S, which can also be connected wirelessly.

In addition, the starting price has not yet been precisely determined. However, the company announced that the model under review will cost around $1000. It remains to wait for the release, and then compare this price with soundbars that have similar characteristics.

To conclude our preview of Sony’s HT-A5000, let’s look at the options for expanding the system and how much these improvements will approximately cost the end user. As we already understood, the soundbar itself will cost about $900.

However, a more rational investment would be to purchase additional rear speakers, since any acoustic panel cannot really provide a good rear. This is especially true in large rooms. An additional set of rear speakers Sony SA-RS3S will cost the end user about $350.

In preparing the article, materials from https://ultrahd.su/zvuk/sony-ht-a5000-obzor-saundbara-5-1-2-s-dolby-atmos-i-hdmi-2-1.html were used. Visit article here.