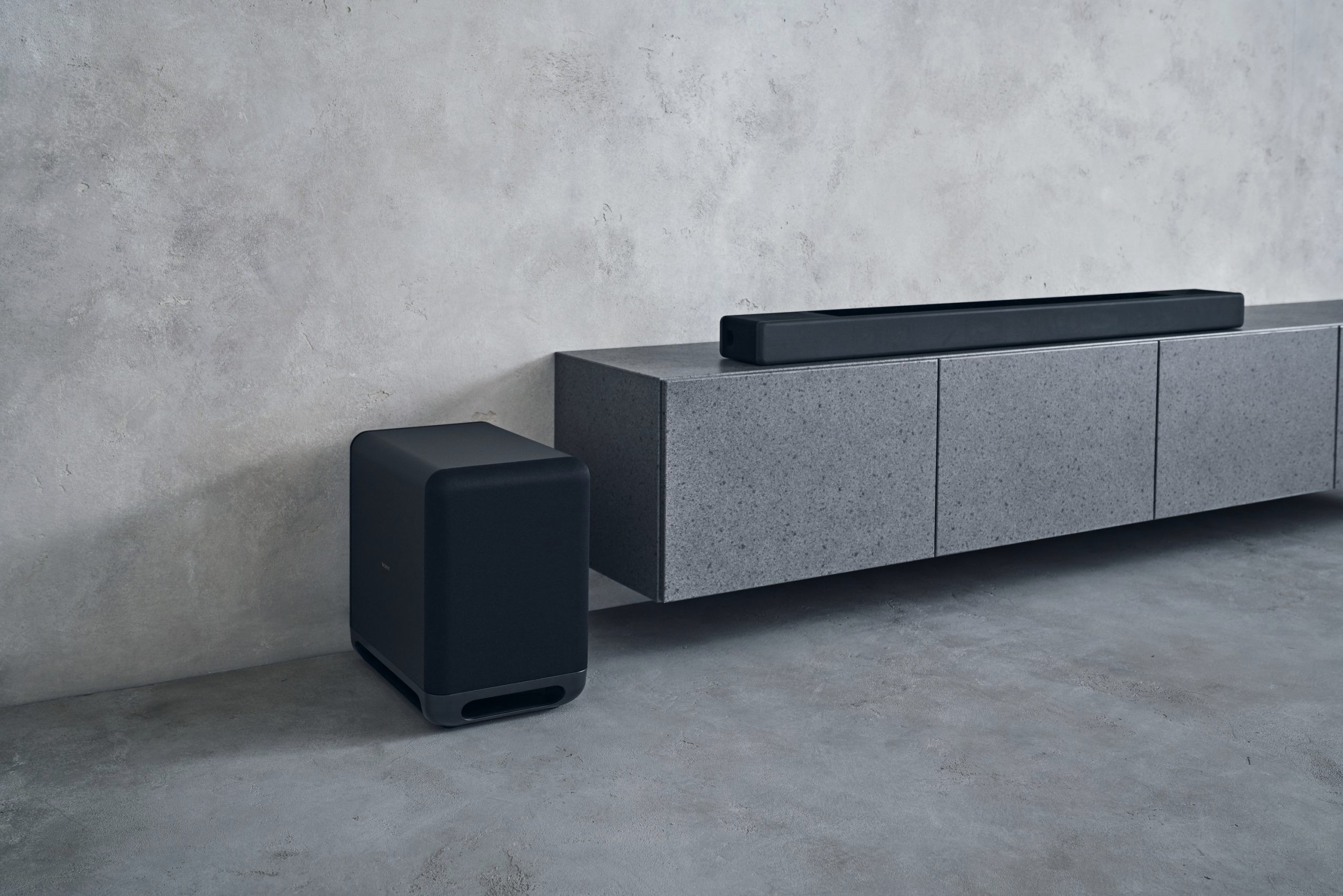 Sony is expanding its home audio segment with a high-quality audio solution in the form of the Sony HT-A7000 Soundbar. In this Sony HT-A7000 review, we will consider the design features, as well as the advantages and disadvantages of this speaker system, in order to draw a conclusion for ourselves: is it worth buying the HT-A7000.

Interestingly, the HT-A7000 combines everything in the panel itself. These are front speakers, reflecting speakers, upward-firing two beam tweeters and a dual subwoofer. Therefore, a wireless subwoofer is not included with the premium soundbar, as is usually the case with competing products.

This also means that the room only needs space and power for the soundbar. The visually “omnidirectional block design” of the Sony HT-A7000 soundbar is nothing unusual. The front of the soundbar is covered with an acoustic metal mesh. The speakers underneath the acoustic fabric point upwards.

The soundbar is not only a heavyweight in terms of features and power output. The postman, of course, will not be happy when he is instructed to drag the device weighing 8.7 kg to the 5th floor of a five-story building. In addition, the size of the soundbar should be clearly understood. The device is 1,300 mm (1.3 meters) wide, 142 mm deep and 80 mm high.

Height 80 mm is not unusual for this price category and class of equipment. However, on some TV models, the soundbar may protrude beyond the screen size. Product width can also be an issue with some smaller set-top boxes.

What makes the Sony HT-A7000 soundbar so special? Let’s start with the speakers. The 7.1.2 system has a total of 11 channels with a maximum output power of 500 watts. This is already impressive. Two speakers pointing up. They generate overhead sound effects that really show through vertical surround technology and 3D sound formats such as Dolby Atmos and DTS: X.

The dual subwoofer is located directly on the front panel. Featuring the X-Balanced Speaker Unit, it provides maximum headroom for powerful bass. Five front-facing speakers deliver crisp effects and dialogue. A beam tweeter is responsible for the surround sound effect, reflecting sound off the walls.

The Japanese electronics maker promises users a unique audio experience similar to those found in live concerts or studio sessions via Amazon Music HD or TIDAL. For 360 Reality Audio, content must be properly prepared. But regular music streams, in addition to high quality formats, should benefit from the capabilities of the Sony HT-A7000.

When playing audio streams, built-in technologies such as Chromecast, Spotify Connect and Apple AirPlay 2 should also be mentioned . The HT-A7000 soundbar can also be controlled using voice commands via Google Assistant.

In terms of processing and sending visual content, the Sony HT-A7000 soundbar has already been updated. Even if the PS 5’s own game console does not yet support 8K HDR playback, the new HT-A7000 soundbar is already ready to transfer the resolution to a compatible 8K TV.

But who needs 8K? Now more practical is support for 4K @ 120Hz, which is possible, for example, after the recent patch for Call of Duty: Warzone on PS5. High dynamic range (HDR) video signals in HDR10, HLG (Hybrid-Log Gamma) and Dolby Vision HDR are also supported.

Sony HT-A7000 can be supplemented with SA-SW5 300W subwoofer, two SA-RS3S rear speakers or SA-SW3 200W subwoofer. Recall that the Sony HT-A7000 already has two built-in subwoofers, which, however, cannot replace a “real” external subwoofer. At least some surround sound lovers will think so.

And the action-packed 4K Blu-ray movie or shootout on the PlayStation 5 will really lift your spirits only when you really feel the bass. Sony is also aware of this and is offering interested buyers two options for expanding the HT-A7000 soundbar.

The SA-SW5 Wireless Subwoofer with 180mm (7 ”) speaker diameter provides an additional 300W of power output. The SA-SW3 subwoofer with a 6-inch speaker (160 mm) has a power of about 200 watts. Both models should give the soundbar the necessary “punch” as well as visually grab attention.

If you want to make the most of your compact audio system, you can easily connect two SA-RS3S wireless rear speakers to the HT-A7000 speaker panel. The rear speakers are even suitable for wall mounting. For example, they can be slightly raised behind the viewer’s seat. The HT-A7000 breakout panel has two HDMI 2.1 inputs and one HDMI 2.1 output (with eARC) to provide the best audiovisual experience. In addition, the device has an optical audio input, a 3.5 mm headphone jack and a USB type A port. The device does not support HDR10 + format.

HT-A7000 Price
The device in question is definitely not cheap. The Sony HT-A7000 has a suggested retail price of £ 1,300. However, the A7000 has features that many soundbars from other manufacturers lack. One example is the presence of an HDMI 2.1 port .

The SA-RS3S wireless rear speaker expansion costs around £500. The manufacturer wants to get £ 500 for the SA-SW3 wireless subwoofer, or £ 800 for the SA-SW5. Thus, the combination of a soundbar and a subwoofer costs at least £1,800.

Summing up the review of the HT-A7000 from Sony, it should be added that there is another option for expanding the Sony A7000 soundbar. To complement it with the Sony HT-A9 360 spatial audio system! In this case, the price will be much more expensive than buying a ready-made soundbar with the same number of active channels.

However, in this case, the user gets 4 additional speakers with wireless connection. Overall, the Sony HT-A7000 will suit those users who appreciate surround sound, but at the same time do not have a place for a home theater.