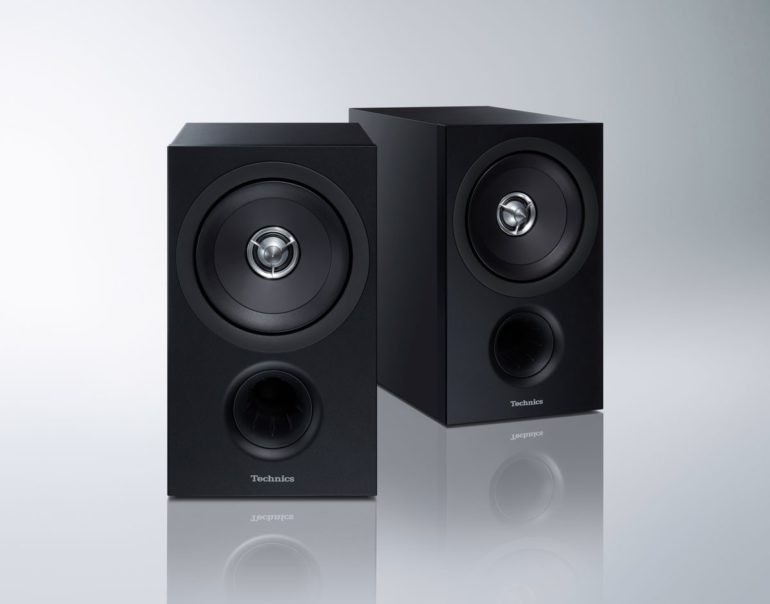 Apparently, all lovers of high-quality sound and audio equipment are familiar with the Technics trademark, and at the end of the last century it was more popular and more widely represented than at the beginning of this. It appeared in 1965 as one of the brands (along with Panasonic) of the Matsushita Electric Industrial Co., Ltd corporation, which has been producing the widest range of products since 1918, and since 2008 it has been simply called Panasonic Corporation.

It’s easy to find a section on Technics’ history on the Technics website. One can only be amazed at the breadth and diversity of the range of products developed and released on the Hi-Fi market, as well as the boldness of the design idea, which must be due to the considerable financial capabilities of the parent corporation. However, there was a break along the way, but for about a decade the company has gradually revived its glory, still releasing Hi-Fi components of many types. 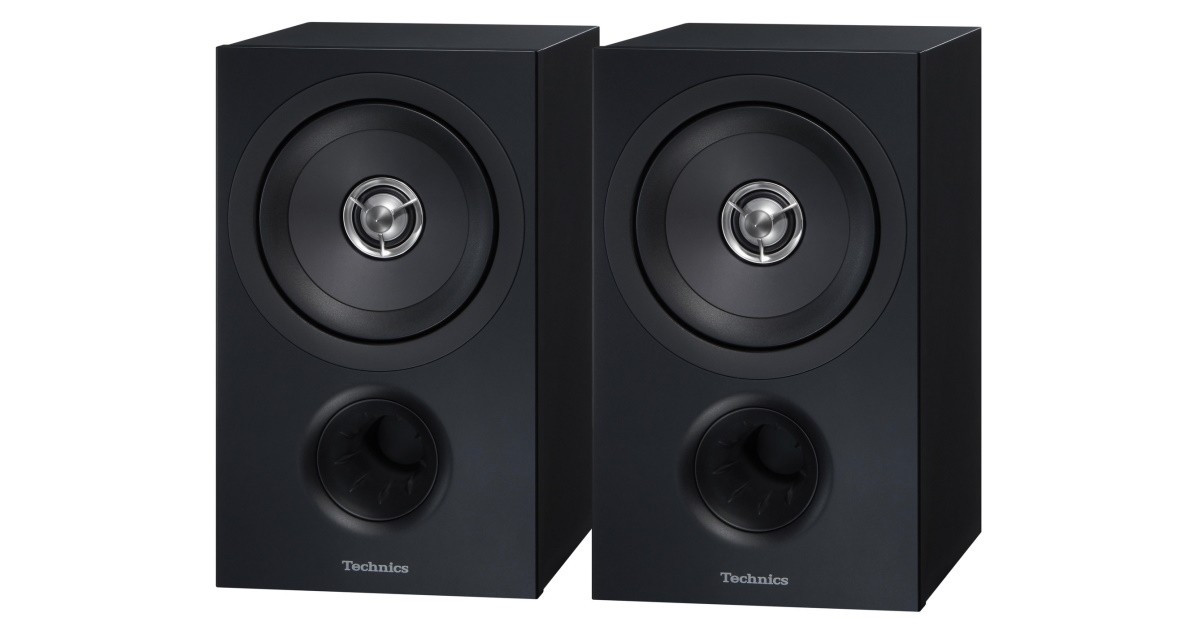 Technics’ first product was a small 2-way closed cabinet speaker, but later the company came up with some very sophisticated speaker systems, gaining a lot of experience and expertise in their design. And now our market (and the brand is mainly represented in local and Asian markets) has got new bookshelf speakers, which we were lucky to meet.

Technics SB-C600 are small in size (HxWxD: 29x17x28 cm) and look rather modest, especially if their speaker is covered with a complete round protective grille with magnetic fastening. They have ordinary-looking rectangular black cases, not solid, as is the case with most modern speakers, but a composite rear panel with numerous screw heads, as well as two “buttons” of connectors for connection. A generously sized bass-reflex port extends out onto the front panel, and you can’t say that it adorns the speakers. But the coaxial emitter attracts the eye, arouses interest and somehow immediately inspires respect – you just want to take a closer look at it, but there is something to see there. 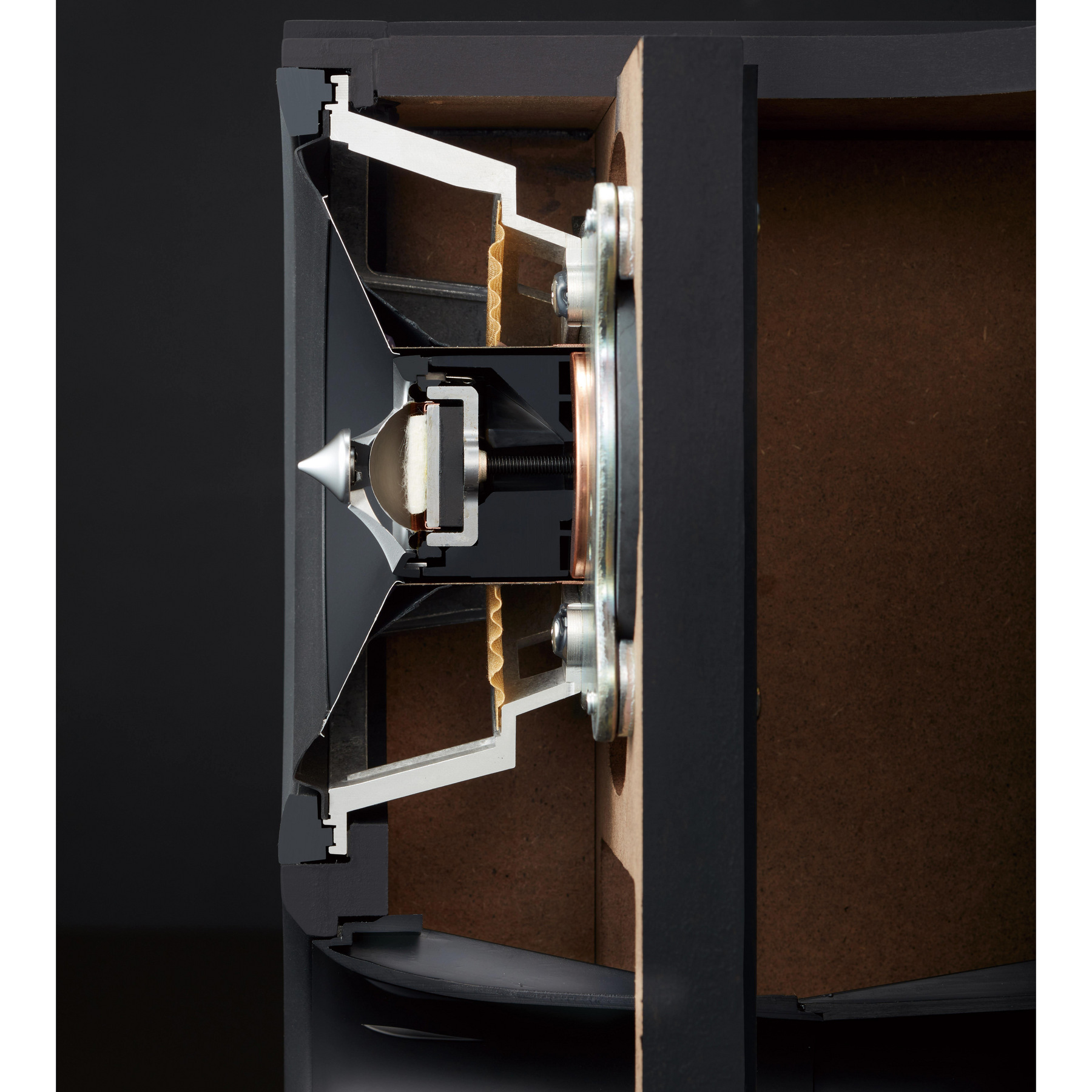 Attention is drawn to the smooth, without sharp boundaries, the geometry of the midrange / woofer, which contributes to the formation of smooth, without inhomogeneities, the fronts of sound waves, which in coaxial radiators are designed to tend to spherical

This module consists of a coaxially positioned one-inch tweeter with a specially coated aluminum dome and a 15 cm mid/bass driver with a shallow cone of the same material. In its center is a figured phase-equalizing “bullet” that improves the high-frequency characteristics of the sound. This whole design looks elegant and neat, which is facilitated by the absence of visible elements of its fastening to the body.

And this is no accident. This module is actually fixed not on the front panel, but on a special partition parallel to it, installed inside the case, which reduces the level of vibrations and resonances, including by increasing its rigidity. Its shape and location are carefully calculated using computer simulation. By the way, it becomes clear why the rear panel is not solid – this is required by the assembly technology of the SB-C600. 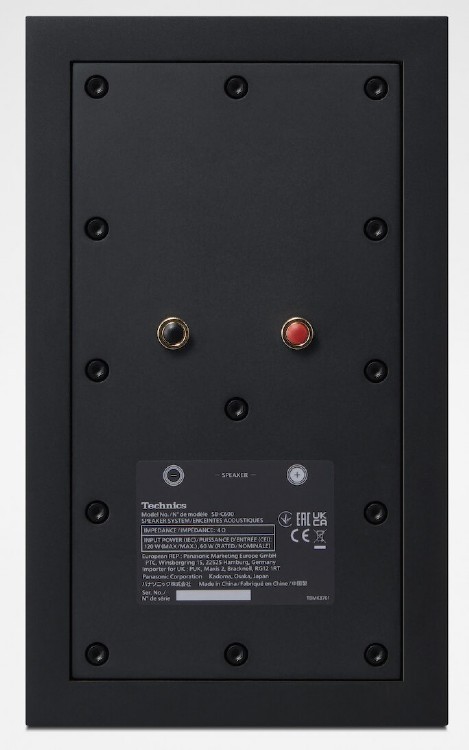 The phase inverter port at the speakers often becomes a source of noise created by turbulence – swirls – of the air flow going through it. This phenomenon can be minimized by giving it the right shape. A similar problem has to be solved in the aircraft industry, and Technics developers have taken advantage of the methods of calculating the configuration of the aircraft wing, providing the necessary support for sound emission in the low frequency range without unwanted side effects.

So the round hole on the front panel is quite a high-tech design element, and the realization of this fact somewhat reconciles our sense of beauty with its appearance. In addition, such speakers are less demanding in terms of placement than those with a rear port. It is also worth mentioning that the SB-C600 crossover uses high-end components, for example, 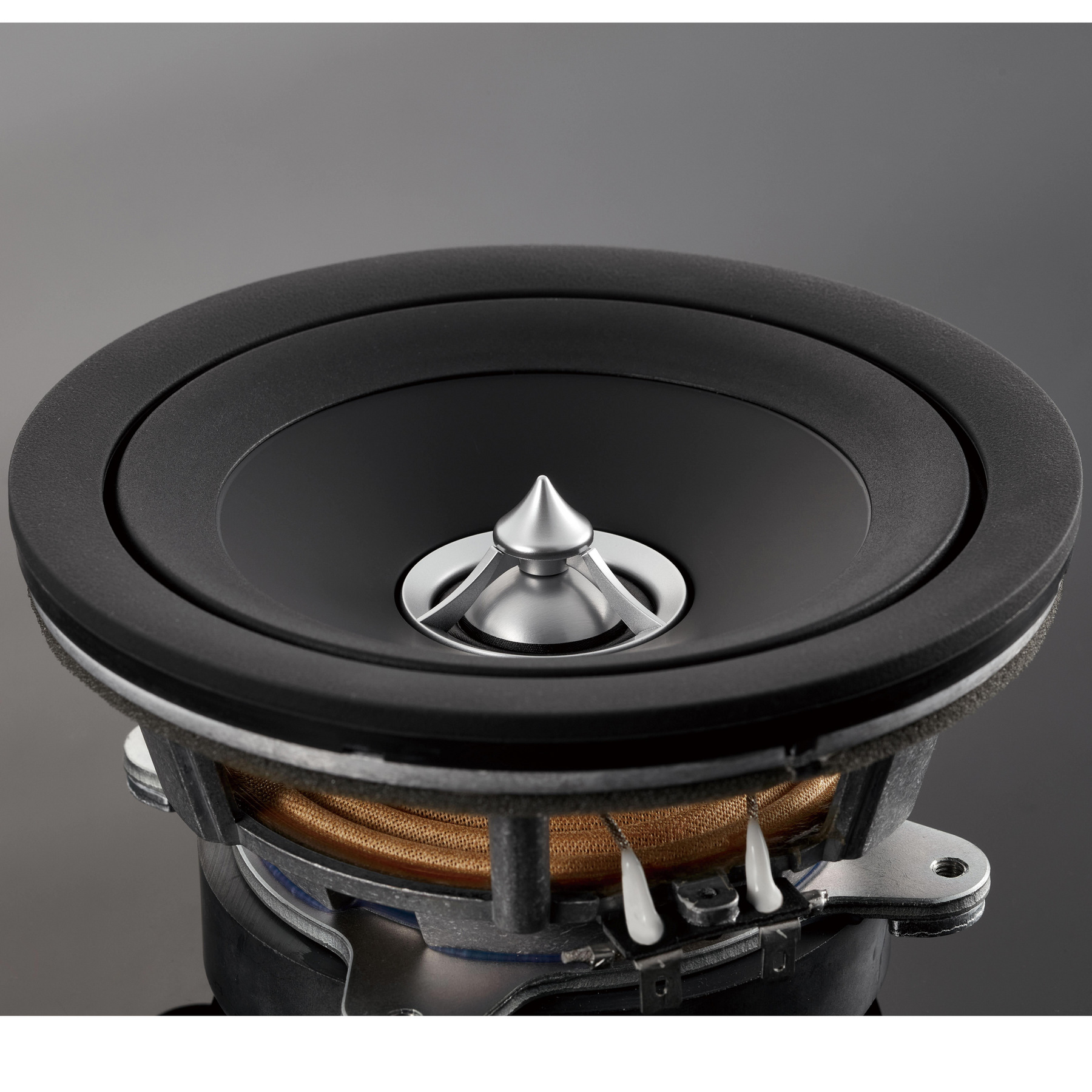 You can expect and even demand a lot from small bookshelf speakers with a fairly significant price tag – and the Technics SB-C600 did not disappoint. They have a tonally balanced, meticulously detailed, transparent and expressive sound. We also note deep and weighty basses, as well as filigree microdynamics. The AU is not capricious in installation, but having started testing with the album of D. Daniels JS Bach. Sacred Arias & Cantatas, with their acoustic axes oriented exactly at the listener, we found that the vocals are somewhat muffled, and the image of the soloist is focused not in the foreground, but a little in the distance. Having slightly turned away the bodies, but without bringing them to a parallel arrangement, we managed to “straighten out” the middle, and there were no more complaints about the tonal balance.

The universal digital player Mark Levinson No. 5101 was invited to the role of the source in the system, and the amplifiers were the two-component Mark Levinson No. 5206/No. And, I must say, the SB-C600 are so transparent that they easily managed to identify and demonstrate the features of the sound of both options.

With ML, the highest detail, excellent focusing, deep textured bass, rounded, volatile and at the same time detailed and varied highs (the tweeter is “metal”, and the tweeters are silk), as well as the special smoothness inherent in this particular amplifier, have come to the fore. flow of music.

Such an audio path turned out to be quite capable of playing the Third Concerto of S. Rachmaninov (album Pletnev Rostropovich Prokofiev 3 Rachmaninov 3), without discounts for the small dimensions of the speakers. On a large-scale stage with a well-visible perspective, a symphony orchestra freely settled down, the piano turned out to be visibly presented in front of it. The sound is coherent and informative – you want to track every detail, while enjoying some special melody and even tenderness of this wonderful music. Weighty lows provide a solid foundation for the performance and give it realism and authenticity.

Vocals are also worth recording on the SB-C600’s asset. The album Maria Cecilia Bartoli is listened to with great pleasure – her voice with a pronounced vibrato is transmitted with the smallest tonal and dynamic details, it sounds rich in timbre and impresses with the mastery of bel canto, as well as artistry.

And with the song “Sweet The Sting” by Tori Amos, we are once again convinced of the excellent tonal balance of the speakers: the pulsating bass rhythm does not obscure her characteristic voice, full of ironic intonations, which often happens in other systems.

But still, with some compositions, we lacked the rigidity of dynamic accents or brutality. Well, or, as with the “Foul Dance of Koshchei” from I. Stravinsky’s ballet suite “The Firebird”, “devils” – everything, it seems, with the presentation of this music is excellent, but the intonations are not what you expect.

With the Technics SU-G700M2 amplifier, the picture improves in this regard. Although it loses to the significantly more expensive two-piece Mark Levinson No. 5206 / No. 5302 in refinement and elegance of sound and is not as detailed, it does not disappoint with compositions where biting impact and hard energy are important. Rapture Of The Deep by Deep Purple is delivered weightily, expressively and elaborately by the SB-C600 shelf speakers, with excellently articulated vocals, and Uprising by Muse delights with a clear and groovy rhythm. 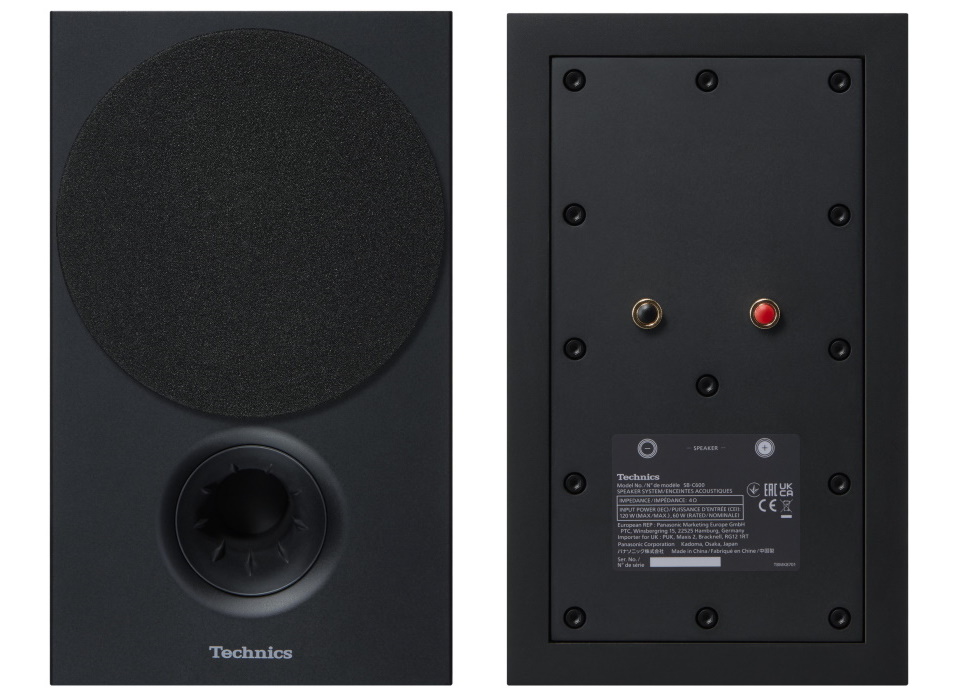 Technics is definitely on the rise. Along with the highly successful turntables, already popular headphones, and electronic components, speakers are also becoming popular. The SB-C600 demonstrate that the brand’s specialists have not lost their speaker development skills and are ready to conquer new heights of craftsmanship using modern knowledge and technology. And for music lovers, we strongly recommend this model to form a small-sized system with a large and high-quality sound.