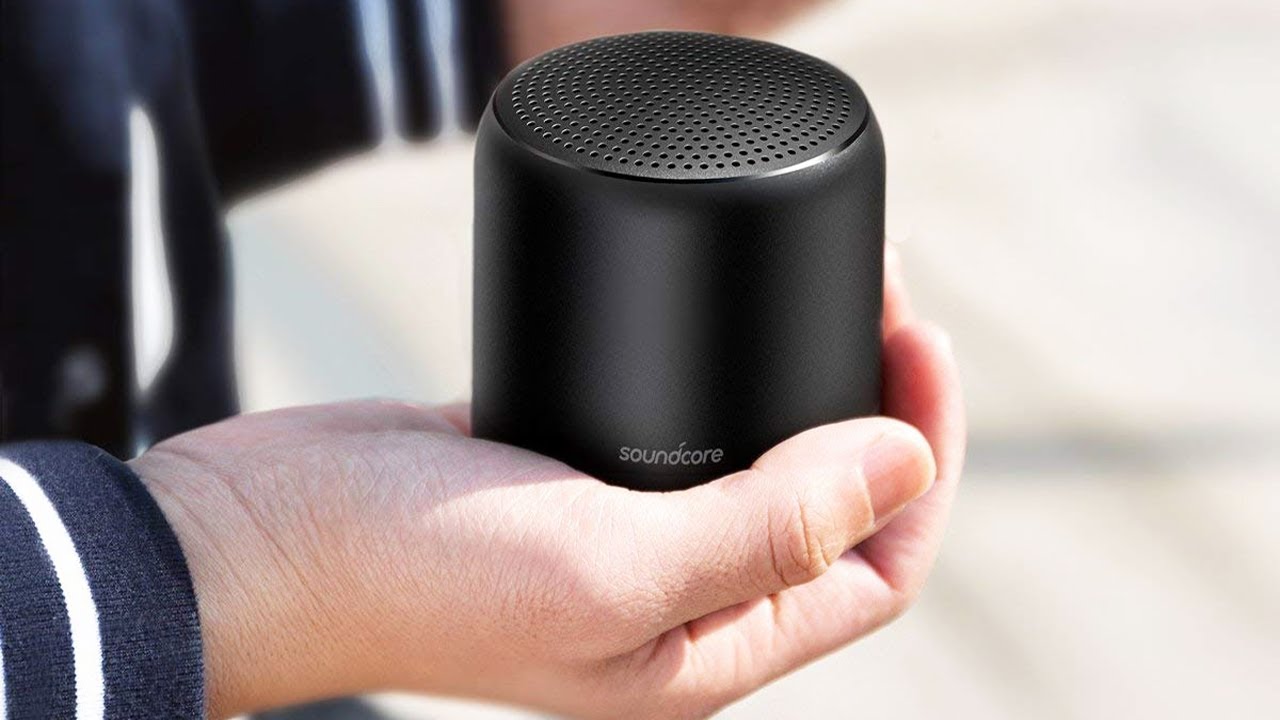 Today, the presence of a Bluetooth module has become almost mandatory in any electronic audio device. However, let’s not forget that the beginning of the active operation of the wireless protocol in audio technology was laid precisely by small portable speakers, which have turned into an analogue of transistor radio receivers of the past, without which not a single trip to nature or a picnic in the fresh air can do. We share our rating on the most interesting and best Bluetooth speakers of 2020. 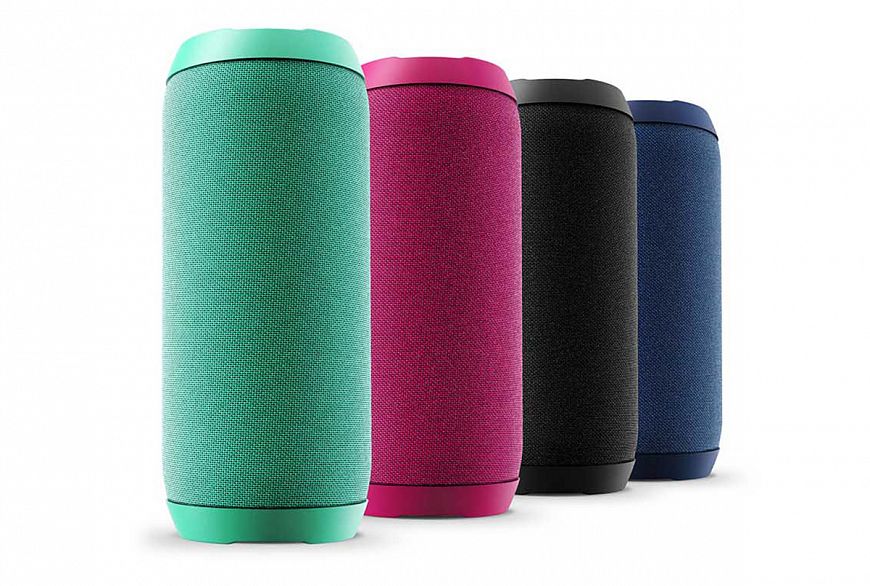 This speaker, very interesting in terms of price, is distinguished not only by its bright colors, but also by excellent functional equipment that goes beyond the usual for speakers of this format. Suffice it to say that a signal can be sent to it not only via Bluetooth, but also to connect an external player to it via a mini-jack, plus it is equipped with a USB connector with support for Fat 32 flash drives and a player for microSD cards up to 64 GB. Moreover, there is even an FM tuner that will allow you to listen to your favorite radio anywhere. If you have two Energy Sistem Urban Box 2 speakers, then thanks to TWS (True Wireless Stereo) support, you can organize a small stereo system. The column is equipped with two full-range speakers with a diameter of 40 mm and built-in amplifiers with a power of 10 watts. Amazing equipment for the price. 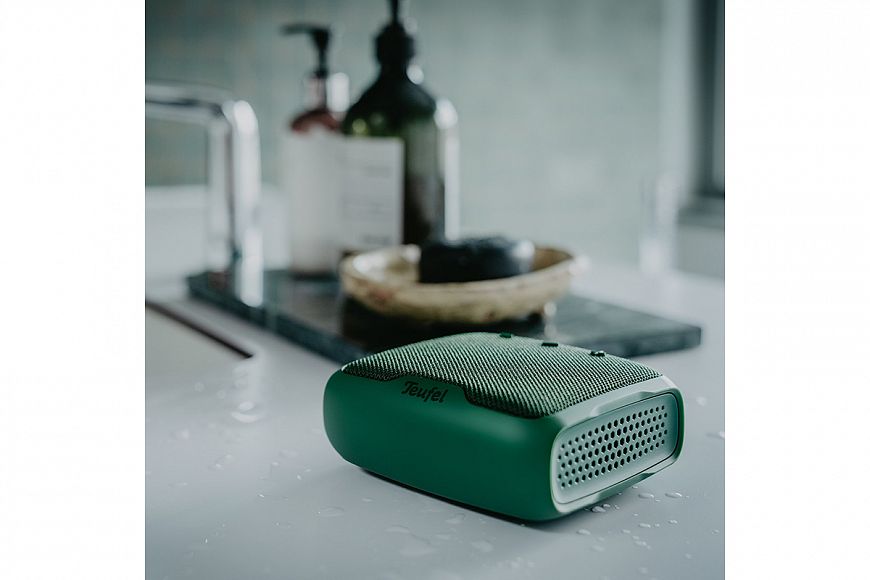 Thanks to its shockproof casing and IP-X7 certification, the speaker from Berlin-based Teufel can easily withstand drops and splashes on the case of water and dust. Despite its diminutive size, the speaker is equipped with two passive radiators in a Push-Pull configuration, which allows it to play very loudly. If desired, the owner can combine two Boomster Goes to create a portable stereo system. The wireless connection to the signal source is carried out via the Bluetooth 5.0 protocol; there is also a 3.5 mm jack on the case. The built-in battery lasts up to ten hours of continuous use, and the durable strap allows you to wear the speaker on your wrist. Teufel Boomster Go is available in seven different colors. 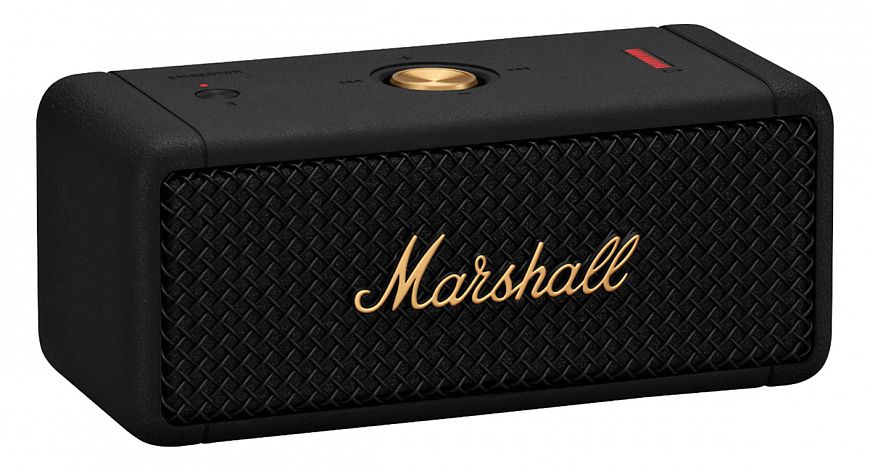 The new model from Marshall has a compact size, improved moisture protection and a large battery. The speaker is capable of receiving audio content via Bluetooth 5.0. Two broadband drivers with a diameter of 2 inches are located not only on the front, but also on the rear wall of the case, due to which the speaker plays 360 degrees. The bass response is enhanced by a pair of passive radiators. Each driver is powered by a separate 10 watt amplifier. On the top wall of the speaker cabinet there is a proprietary joystick for playback control and volume control. Distinctive features of the new items are a capacious battery that provides up to 20 hours of battery life, and protection against moisture according to the IPX7 standard, which allows you to safely use the speaker outdoors. The Marshall Emberton weighs just 700 grams. 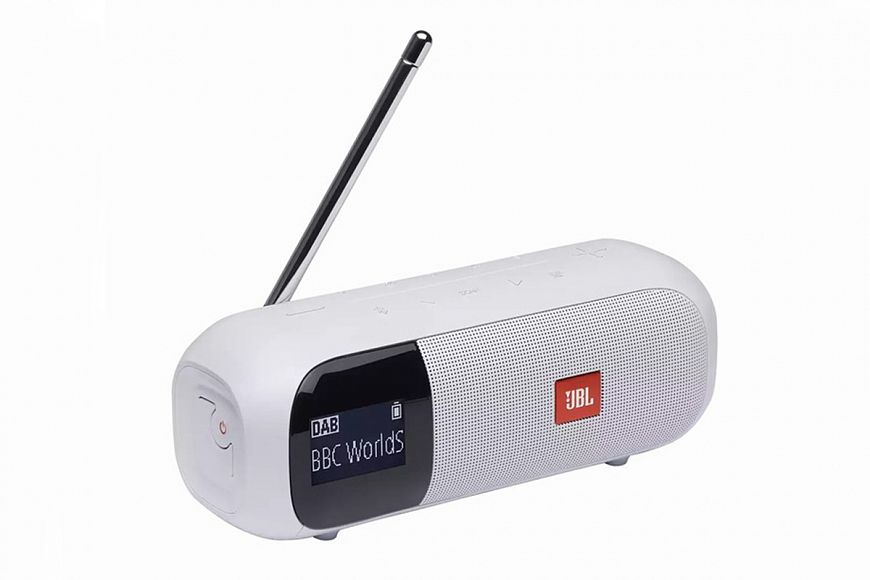 The body of the model is certified according to the IPX7 standard, that is, it is not afraid of either dust or water. The new generation features more powerful sound, a larger built-in battery and an improved design. Each speaker has a built-in digital DAB / DAB + tuner, but also an analog FM, and a telescopic antenna is also available. Of course, there is also a Bluetooth module for wireless communication with gadgets. The JBL Tuner XL is available in black or white and has a 69mm full-range speaker. The declared power of the built-in amplifier is 10 watts. The battery life is 15 hours. 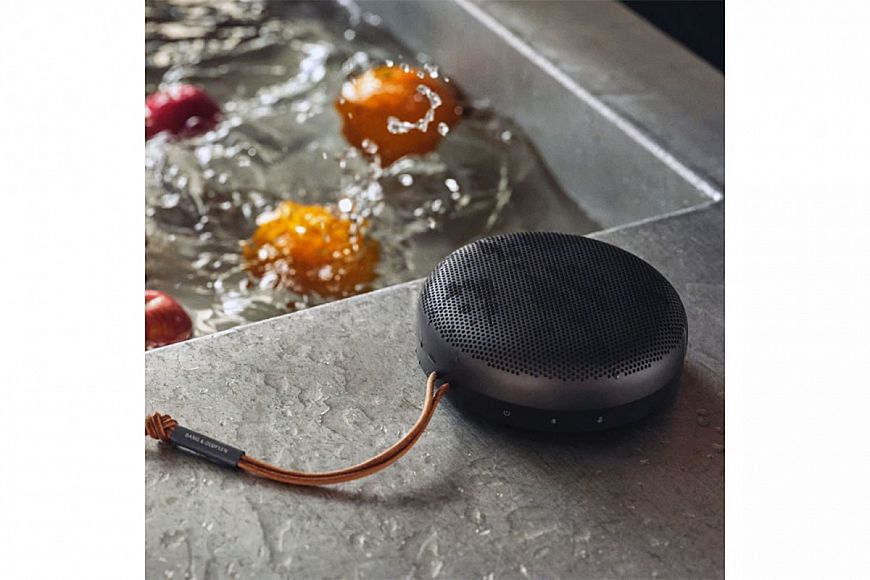 The second generation of the compact Bluetooth speaker is even more compact and splash-resistant. In addition, the model now supports the Amazon Alexa voice assistant, for which the speaker is equipped with three microphones. Considering that there is no Wi-Fi module in the audio system, the assistant can only work when the speaker is paired with a smartphone that has Internet access. The column supports aptX and AAC codecs, the audio system itself is two-way – a 3.5-inch mid / bass speaker is complemented by a 0.75-inch tweeter. Serving the radiators is a 30-watt Class D amplifier. A pair of Beosound A1 audio systems can be configured for stereo playback. You can control the speaker through a proprietary application for mobile gadgets, which, for example, allows you to use an equalizer. 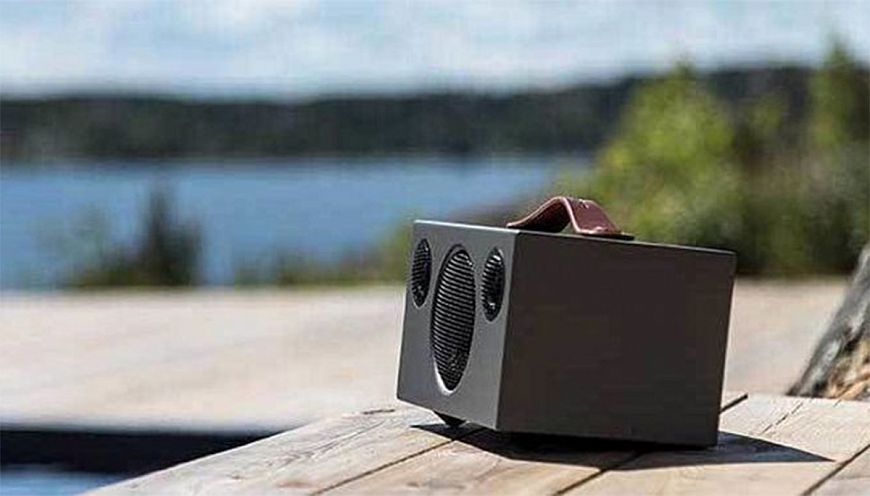 The novelty replaced the popular Addon T3 model, which was produced for three years. The main changes concerned the design of the phase inverter, brought out to the rear wall of the case, and the adjusted settings of the DSP sound processor. Like its predecessor, the Audio Pro Addon T3 + is equipped with three Class D amplifiers delivering 5 watts to each tweeter at the edges of the front panel, plus 15 watts to the 3.5-inch mid / bass driver. The battery charge of the column lasts for a day of continuous operation at half power, or for 8 hours at full power. In addition, the audio system can act as a backup battery for mobile gadgets – there is a USB port on the back of the case for this. The speaker uses Bluetooth 4.0 wireless interface to communicate with the content source. Besides, the column is equipped with an analog input on the mini-jack connector. The audio system enclosure is made of MDF with metal front and top panels. The austere Scandinavian design is enhanced by a stylish leather carry handle. 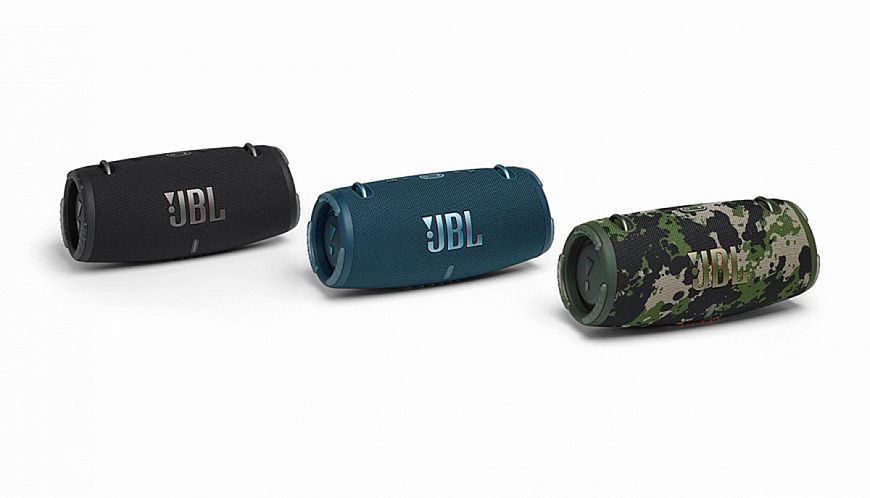 JBL’s new generation of “extreme” portable speakers feature four advanced speakers and traditional passive radiators that deliver detailed, detailed stereo sound and impressive bass. The eye-catching design of a dust and water resistant body, powerful sound and a convenient carrying strap are guaranteed to attract the attention of others. The built-in battery of the speaker is designed for 15 hours of continuous playback, and the USB ports on the rear panel will not let your gadgets run out. Thanks to PartyBoost technology, you can combine two speakers to achieve a full-fledged stereo effect, or connect any number of speakers with this function in a single circuit to make a loud party. 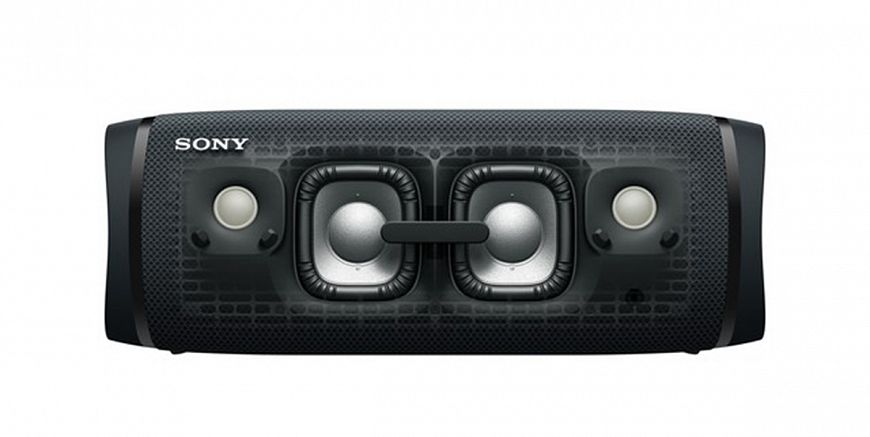 The model is distinguished by an interesting design – in it the stake is not made on sound propagation at 360 degrees, but on creating the correct stereo effect by installing all the speakers on one panel. Each channel has two radiators – a small tweeter and a rectangular X-Balanced main speaker with a profiled suspension. Its cone is made of MRC (Mica Reinforced Composite). A Bluetooth 5.0 module is installed inside the speaker, the manufacturer claims to support the proprietary Hi-Res codec LDAC, as well as proprietary signal processing systems Clear Audio +, DSEE, LiveSound. The claimed battery life on a single charge is up to 24 hours, and the speaker has a USB-A port through which you can recharge your smartphone. Speaker enclosure – shockproof and IP67 certified, that is, it is guaranteed not to be afraid of water. The model is offered in black, blue and brown cases. 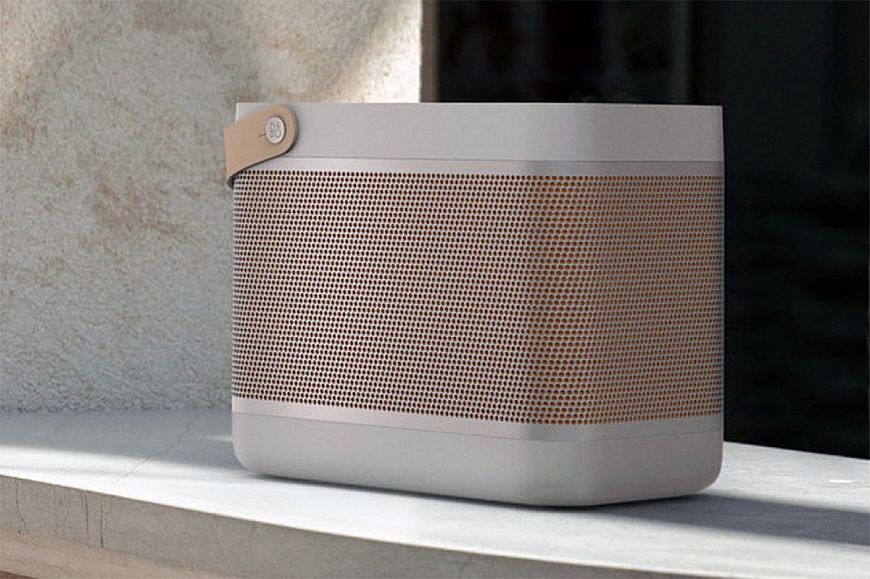 The new wireless speaker from the Danish company, which replaced the Beolit ​​17 model, is equipped with a third more capacious battery and supports Qi fast charging technology for servicing mobile gadgets. So you can recharge your smartphone by simply placing it on the top panel of the speaker. You can charge the standard battery of the speaker with a volume of 3 200 mAh via the USB port. A full charge will last 37 hours at low volume, 8 hours at medium volume, and up to 4 hours at maximum. The model is equipped with three broadband radiators with a diameter of 1.5 inches, directed in different directions. On bass, they are assisted by a 5.5 “driver working in tandem with a pair of 4” passive radiators. A pair of speakers can be configured into a full stereo wireless system. 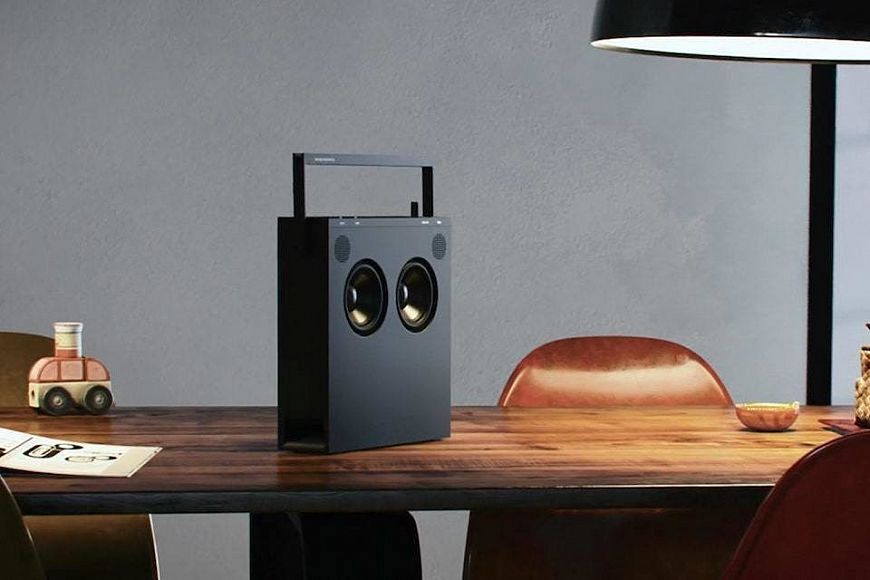 An original Bluetooth speaker with a built-in FM radio from the Swedish company Teenage Engineering. It features two Class D amplifiers delivering 38 watts of power for each of two long travel mid / bass drivers, complemented by a pair of ferromagnetic cooled neodymium tweeters. In addition to the music signal received via the wireless Bluetooth channel, the speaker is capable of broadcasting FM broadcasts – the tuner’s antenna is mounted in the column handle. There is also an analog line input on a mini-jack socket. The content arriving at the speaker is immediately recorded on the built-in digital storage device, and playback starts from it. This makes it possible, if desired, to carry out various sound processing, for which a motorized encoder is provided on the control panel of the device. The wireless audio system has a 5,000 mAh battery and a vintage design reminiscent of 1970s radios. The body of the model is made of amorphous polymer reinforced with fiberglass and decorated with aluminum elements.

Google Home Max is a thing of the past

Advertisement
X
Subscribe to get the best Tech news and reviews of the week.
By signing up, you agree to our Privacy Notice and European users agree to the data transfer policy.
Close
12/15/2020