Windows 11: The Biggest System Update yet 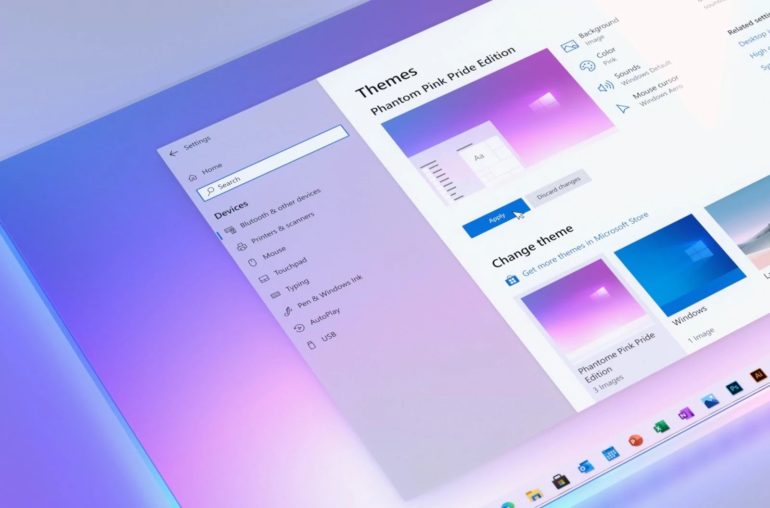 On June 24, Microsoft will hold a presentation at which it will unveil “the next generation of Windows.” The company began sending out a corresponding invitation for journalists in early summer – a week after the head of the company, Satya Nadella, first announced this. Then he announced that the new version of the operating system will be the most significant Windows update in the last 10 years.

I have put together all the leaks about the upcoming Windows update, official hints and data from reputable insiders to see in advance what the new operating system will be like.

When Microsoft introduced Windows 10 in 2015, the company said it was moving to a new platform strategy (Windows as a Service) and Windows 10 would be the last numbered version of the operating system. Over time, this tactic pleased users rather than disappointed – its advantage became especially noticeable in January 2018, when Windows 10 became the most popular computer operating system, overtaking Windows 7.

However, times are changing, and nothing prevents Microsoft from changing its plans. This is not just a guess: inviting to attend the upcoming presentation (June 24), the official Windows Twitter account posted a teaser animation of the event. It illustrates the Microsoft logo as a window with cross-flaps (a reference to Windows), through which light seeps in in the form of the number 11 (although the horizontal flap should have separated the pattern).

This could have been a teasing joke, but later authoritative insider @evleaks confirmed that the upcoming operating system from Microsoft will be called Windows 11. And the presentation will take place at 11 am ET – a very unusual time for the conference to start.

Microsoft clearly needs a good reason to reverse its past claims and still ditch Windows 10 by introducing a new operating system number. And a completely new design is great for that. The Redmond giant has been preparing a redesign for an update for a long time, codenamed Sun Valley – apparently, it was Windows 11 that was hiding under this naming.

The Sun Valley project has flashed on the network for a long time – Microsoft regularly disclosed details of the new interface style, insiders shared previously unknown information, and popular designers in their circles drew realistic concepts based on all this data.

Start and system elements will float above the bottom bar Start is the calling card and face of every recent version of Windows. Not surprisingly, in Windows 11, developers will transform it again, but not so much in functional as in visual terms – the “Start” window will hover above the bottom panel. We have to admit that this small change makes the appearance of the system much fresher. Judging by information from the network, Microsoft will not radically change the “insides” of this menu – the innovations will affect only the design of the window itself.

The control panel will also float, and its design will be exactly the same as that of the “Start”. The action center will be combined with the control buttons together – a similar one has long been used in some other operating systems. Almost all mentions of this new menu indicate that it will be island – the control buttons will be located on one separate panel, notifications will be on another, and specific elements (like a player) on another separate one.

Right angles will disappear, they will be replaced by fillets

In truth, insiders and concept designers disagree on this point – some are confident that Microsoft will not change its traditions and will keep right angles, while others are convinced that in 2021 Microsoft will follow the fashion for fillets. The latter fits better with the definition of “completely new Windows” – just hovering menus are not enough for a new design to be considered truly new. Fillets are expected to affect virtually everything in the system, from context menus and system panels to all application windows. True, even on this issue, the opinions of concept designers differ – some draw fillets in all possible interface elements, others combine them with right angles. 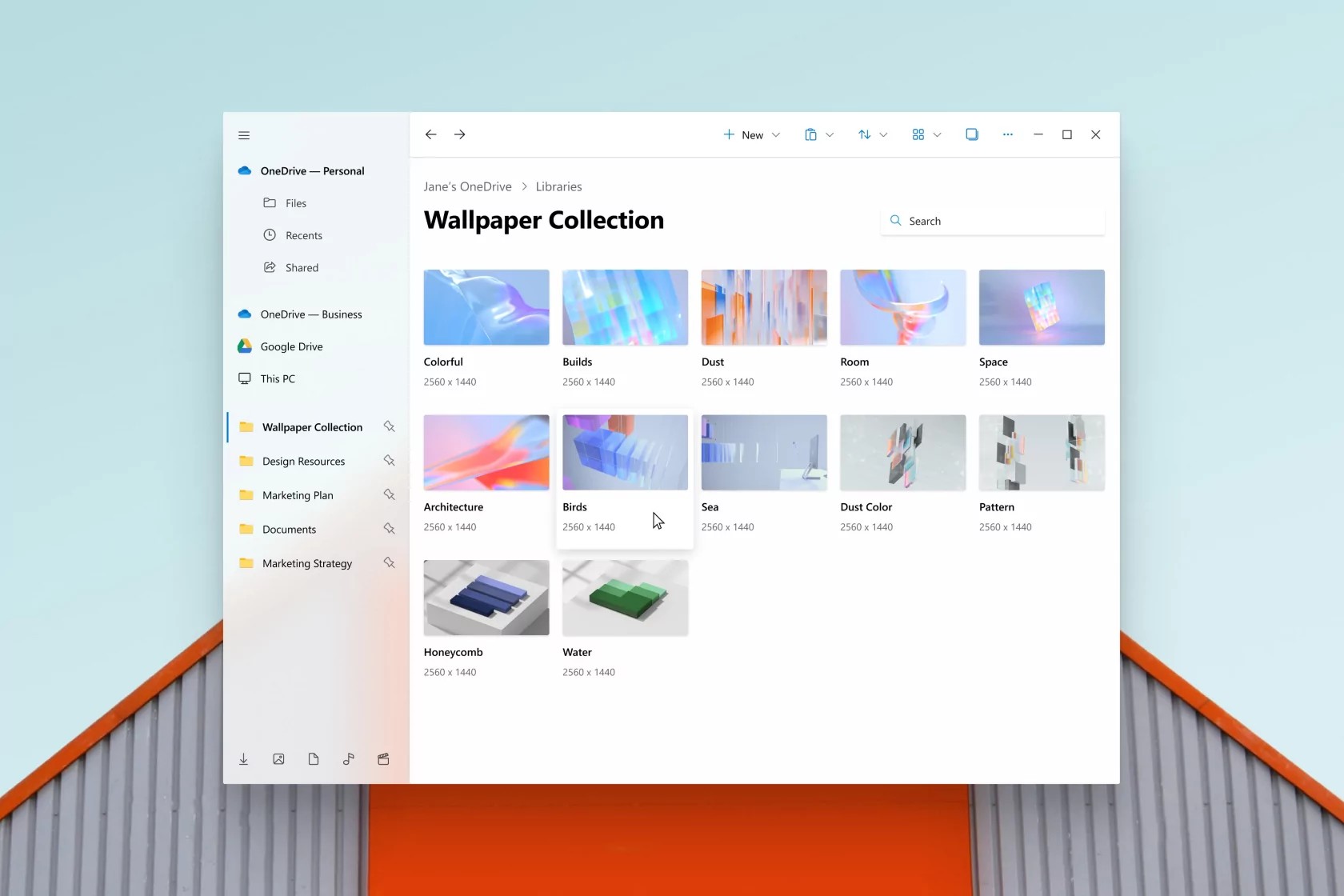 There is disagreement on the web about the island style of displaying windows, the design of the corners and the levitation effect of the menu, but almost everyone is unanimous about the transparency of the windows. The vast majority of leaks and design renders show transparency and blur in all windows, be it at least the Start menu or Explorer. Moreover, these effects are even in the assembly of the canceled Windows 10X operating system, which Microsoft was developing for devices with two screens and weak gadgets in parallel with the Sun Valley project.

The so-called acrylic transparency implies the use of new effects when hovering over elements, as well as increased spacing between elements – those areas of the interface with which the user interacts will certainly become larger, and page titles will be thickened.

Windows 11 will most likely use the default responsive Segoe UI Variable font, which has already appeared in Windows 10 Build 21376 for Insiders. Its advantage is that it is equally well suited for small texts and large inscriptions. This distinguishes it from standard fonts, which are initially created for either small size or large size. For example, the stable version of Windows 10 currently uses the Segoe UI font, designed for 9pt. In smaller inscriptions, it becomes poorly legible, and in large inscriptions it looks expressionless.

Windows 11 will have new icons, and Windows 95 icons will disappear. Yes, they are still in use. Microsoft will finally transform the icons that are used throughout the system. It’s not just about shortcuts to folders, trash cans and other icons found in Explorer. We are talking about all the icons available in the Shell32 directory. There are still icons from the days of Windows 95, and only recently Microsoft updated their design in one of the insider assemblies – of course, they will migrate to Windows 11.

There will be functional innovations in Windows 11 – there are many of them, but they are all small

Much less is known about the features of the upcoming update than about its design. But since Windows 11 and Windows 10X (the canceled OS for weak and foldable devices, the image of which has leaked to the network) were developed in parallel, we can safely assume that all the functions from the latter will appear in Windows 11 as well.

For example, Windows 11 will show when the computer’s camera is in use – a corresponding indicator will be displayed in the system tray. A similar option has already appeared in iOS 14 and Android 12.

Another minor but useful option is Anti-Theft Protection. It will allow you to protect personal data on a Windows 11 device (and this is not only PCs, but also laptops with tablets) if it is stolen. The owner will only need to remotely activate Lost Mode (most likely through the Microsoft website), and the stolen gadget will display a request to enter a PIN or password from the account.

The innovation that users will definitely love the most is hidden under the hood – Windows updates will be installed in the background without the need for a forced restart of the computer to complete the installation. This has already been implemented in Chrome OS and modern versions of Android – this option is really convenient, especially compared to the implementation of installing updates in Windows, which requires a computer restart and takes 5–20 minutes. With the new update mechanism, it takes less than 90 seconds to install updates.

Another important “under-hood” change concerns security – all applications will be installed in their own virtual partitions and will have a “read-only” access level by default. This will protect both the games with the programs themselves, as well as the operating system files, drivers and the registry. In practice, such an implementation ensures that viruses that hit the computer will not be able to affect system components and installed programs, since malware (like any other application) will be allocated isolated virtual space. In Windows 10X, all apps run in a “container” by default, and they need special permission to access items outside of that “container”.

When will Windows 11 come out

We can safely say that Microsoft will not change its long-term practice and will first test Windows 11 on volunteer insiders, and only after that it will release a stable version for all users. The reputable publication Bloomberg believes that the large-scale launch of Windows 11 is likely to take place in the fall of 2021. Before that, the system will be distributed for beta testers, but the first will be received by the participants of the Developers channel in the Windows Insider Program.

By Lucas Jönsson
X
Stay Updated! YOUR SOURCE FOR TECH BUYING ADVICE
Sign up and read everything without ads