Hisense A6G TV series are entry-level 4K basic models of 2021. The line is available in various sizes from 43 “to 85”. Some of the characteristics of the A6G may vary by size, and this can be a little difficult to choose.

In this series there are models with IPS and VA panels. The applicability of matrices of a particular technology depends on the size of the screen. As for IPS or ADS panels, they provide wide viewing angles, but low contrast. Consider the review of Hisense 55A6G 4K HDR TV, where the ADS matrix is ​​used.

Since ADS technology is a legacy of IPS, it also has lower black uniformity than VA. The Hisense 55A6G model in question does not have a local dimming function, as in other TVs in this series. Therefore, the series cannot be recommended for viewing in darkened rooms.

So, the models of the A6G series where IPS (ADS) matrices are applied are 43, 55, 65 and 75 inches diagonals. The rest of the options use a VA matrix, which should work better in a dark room due to the higher contrast. Although in these variants there is no local dimming.

On the other hand, all sizes in the A6G series have a great proprietary interface, as did the higher-end Hisense models. The operating system runs smoothly, is easy to use, and has a huge selection of intelligent applications. We add that these models have incredibly low input lag, even outside the game mode. The pixel response time is relatively slow though, which confirms the mediocrity of the TVs.

As for the designations of TVs A6 Hisense series. Hisense A6G series TVs are designed for the American market. Hisense A68G series is distributed in Canada. In these two versions, the tuners are not able to receive “our standard” DVB-T2. This should be taken into account if you come across an overseas model at a bargain price. The European version comes with the Hisense A6G labeling, including the Russian market. The Hisense A6 series has a very similar design to the Hisense U6G (not yet in Russia) and Hisense U8G . The thin 0.9cm bezels around the screen and the sleek design are good for a budget model. Larger TVs have a slightly different design, but this mainly applies to the rear panel and does not apply to the front.

The stand, like the body, is made of black plastic. The stand configuration is very similar to the Hisense E7G , and, unfortunately, wiggle is noticeable in large diagonals. The stand legs can be installed in two configurations. Regardless of the installation options, the Hisense 55A6G TV is located almost 8 cm above the surface, so most soundbars should fit under the TV.

The back of the Hisense 55A6G is made of embossed plastic. The entrances face to the side, so they can be easily accessed if the TV is mounted on a wall. There are some backward facing interfaces though. The total thickness of the 55A6G TV is about 7 cm at the very bottom. The rear panel has space for storing cable connections. However, such fasteners do not hold cables very well.

As expected for an IPS panel, the 55A6G has a comparatively low contrast ratio. The contrast level stopped at around 1100: 1 (maximum). This makes blacks appear gray in a dark room. This problem is almost invisible in a bright room.

If you prefer darkened conditions, then you should pay attention to the Hisense U6G series – it will be the best choice. The exact level of contrast depends on the type of display. The 50, 60, 70 and 85 inch versions of the A6G TVs have a VA panel. Therefore, these models have a much better 4000: 1 contrast ratio, but the viewing angles are weaker.

Unfortunately, the 55A6G has poor peak brightness for SDR content. It’s not bright enough to overcome on-screen glare in a well-lit room. Such a TV will look good in a space with low indirect lighting.

The peak brightness after calibration in the Theater Night picture mode with the backlight level set to maximum was 250 nits. Changing the Picture Mode to Standard with Active Contrast set to High results in a slightly brighter image at 254 nits. As we mentioned earlier, the 55A6G TV does not have a local dimming feature.

When it comes to HDR playback, peak brightness is no better with this kind of content. This indicator is not much different from the SDR mode, so it is not possible to demonstrate a real HDR picture. Small highlights do not stand out at all against the background of the overall image. On the other hand, the A6G series models meet the target brightness, most scenes are displayed at the correct brightness up to the maximum of the 55A6G TV. Hisense A6G models have good gray uniformity. Four parts of the screen are noticeably darker than the center, which can be distracting when watching action scenes. Nearly dark scenes look a little better, but there is still a noticeable “cloudiness” and an excess of red. Here it is worth paying attention to the fact that depending on the type of VA or IPS matrix, the uniformity of gray color and black tones may differ.

The model reviewed in the Hisense 55A6G review has a black uniformity below average. Almost the entire screen is fogged up, and backlight spots are visible in several places. This again depends on the matrix used in the A6G series. Therefore, VA models will perform better in these indicators.

As expected, the Hisense A6 IPS TVs have good viewing angles. This model can be successfully selected for “wide” viewing, as the image remains accurate from different angles. VA models have worse viewing angles as standard.

Hisense A6G TVs have a semi-glossy screen coating. With this technology, excessive reflections can be observed, so do not place external light sources in front of the screen.
Hisense A6G models have a decent color gamut, but unfortunately cannot display a wide color gamut in HDR mode.

Despite the various drawbacks, the Hisense A6G has a normal response time. This parameter ranges from 6.7 ms to 17.5 ms. There is very little difference in pixel response time between different transitions. This results in some noticeable blur in action scenes, and backlight flickering causes image duplication. Therefore, this series is not suitable for game lovers.

The A6G series of TVs are limited to 60Hz matrix refresh rates and do not support any variable refresh rate technologies such as FreeSync, although official sources indicate HDMI 2.1 interfaces (eARC, ALLM, VRR). But this is the “partial” support that we already saw in the cheap 2021 models. 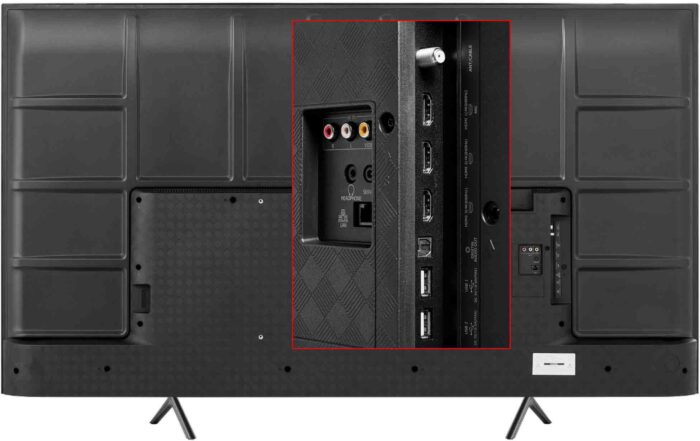 Before moving on to the front-end, it’s worth noting that the Hisense A6G series has an excellent input. Even outside of game mode, input lag is optimal and will definitely work for some games that don’t require a quick response. The input delay range is from 10.5 ms to 55 ms.

A6G series TVs have a disastrous frequency response. Low frequency components are weak, resulting in a lack of bass response. The mid-range and high-frequency profiles are normally balanced at moderate volumes to ensure clear dialogue. Unfortunately, at maximum volume, the soundstage is jammed. Oddly enough, but even in the 55th diagonal, the sound system power is only 2×8 W, in models with large sizes the power is higher.

There is a difference regarding the Hisense A6G and OS, as with most of the Hisense 2021 lineup. In some markets, the A6G series comes with an updated Android TV.  The interface is fast, easy to use and no errors were noticed.

Overall, the Hisense A6 TV series are not bad TVs. Wide viewing angles and good handling make it a good choice for viewing. But the models are mostly not bright enough to properly deal with glare in a bright room. It all depends on the installed matrix.

Despite the low input lag, the A6G TVs are mediocre for gaming as they lack advanced gaming features. If you like to watch movies in the dark, then the models with IPS panels are not suitable, as they have a low contrast ratio, black uniformity is below average and there is no local dimming function.

As we now understand, Hisense A6G is the basic entry-level 4K TVs at Hisense 2021. The main competitors can be called other entry-level models such as Samsung AU8000 , Sony X80J , LG UP8000 .