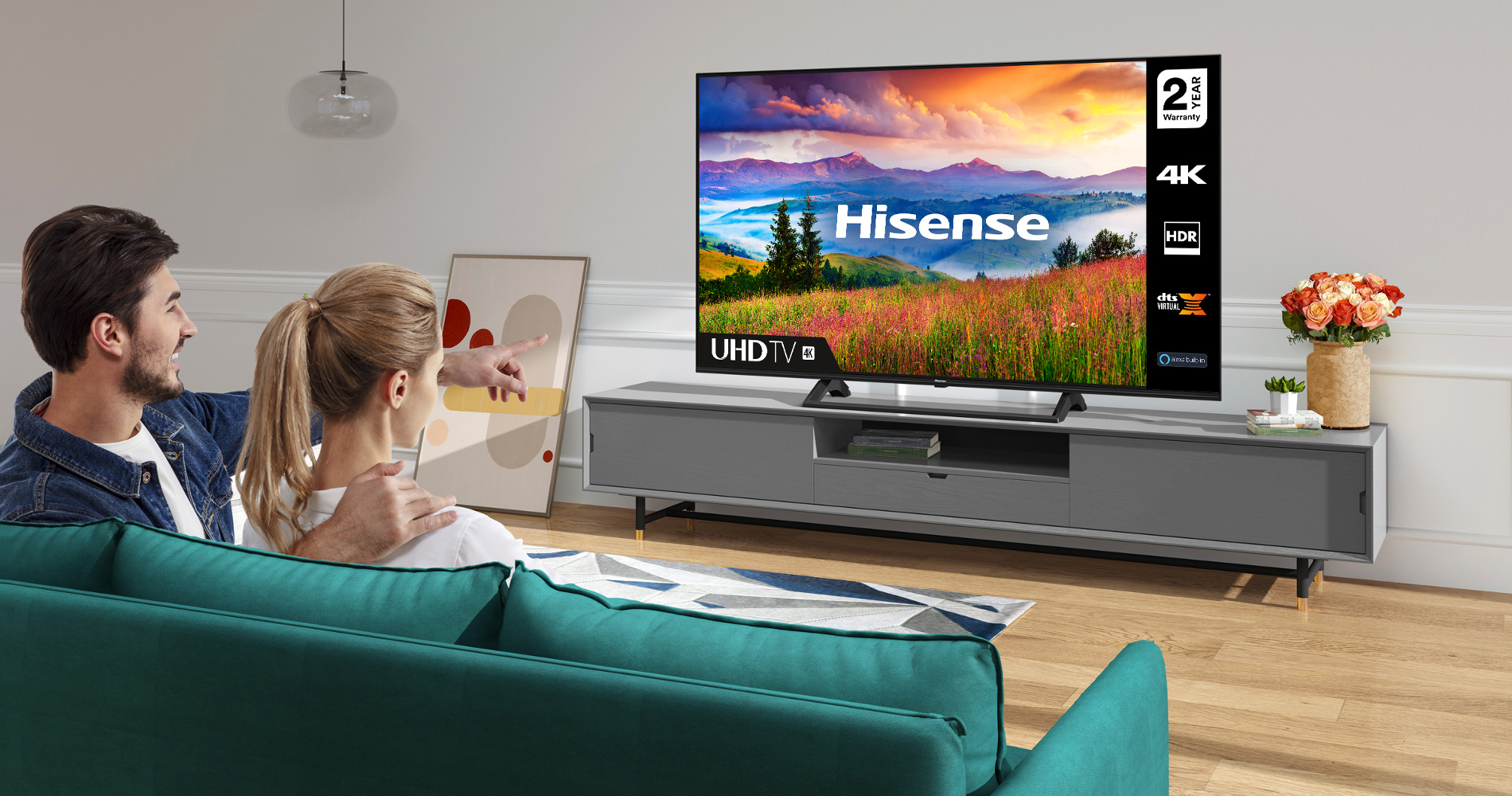 Hisense brand offers an alluring HDR UHD TV from the 2020 Series 7. If the flagship model is too expensive for you, the A7300F is one of the best options. The seventh series of this manufacturer is “listed” as middle-class TVs.

The “seven” also includes the Hisense A7500F series of TVs, recently reviewed on our UltraHD.su resource , but it has its own advantages. Let’s take a look at the Hisense 50A7300F 4K HDR review to see the difference between the A7300F and the A7500F.

If you’re not already familiar with Hisense, it’s worth noting that the Chinese firm is storming the Smart TV market by taking over Toshiba and offering relatively high-quality 4K models at much lower prices than regular market players. The A7300F series reviewed in the review is a typical example of the new products of this manufacturer in 2020.

Most users need a high-quality TV, but, for example, installing Samsung or LG in the kitchen is blasphemous, according to some. Therefore, you have to make a choice among cheap models and the 50A7300F from Hisense will be a logical enough option.

The A7300F series corresponds to its price range, because the largest diagonal in the 65A7300F will cost a little more than 50 thousand rubles. The TVs of this series have good looks, they are easy to operate and have good picture quality. The A7300 models are endowed with some smart features like Hisense U7A . Unboxing and setting up your A7300F TV is pretty straightforward. The 50A7300F model under review with a 50-inch screen weighs about 10 kg with a stand. The stand is quickly attached to the bottom of the screen with a few supplied screws. It remains only to install and turn on the TV for the initial setup.

As a rule, a manufacturer of cheap TVs saves on the design of models and uses fragile plastic, but not in the A7300 series. Of course, the difference in design and build will be noticeable compared to competing brands. But the build of the 50A7300F TV makes a good impression.

The A7300F series comes with a remote control that fits well in the hand. There are rubberized buttons on the surface, which are smooth and pleasant to the touch. There is a set of buttons for direct access to various apps like Netflix or YouTube.

Unfortunately, the remote control does not correspond to the numbers of the letters, so typing is available only through the onscreen keyboard. Some of the buttons on the remote control are too close to each other, and this causes some difficulties at first.

As with any TV, there are a number of ports on the back that are easily accessible. Each leg of the stand has a plastic channel through which you can tuck your cable connections nicely. This is not the best solution, but there will be no clutter in the wires. It should be noted that in the Hisense 65A7300F model, the interface is made differently than in the smaller diagonals. A7300F series models are equipped with a quad-core processor. The operating system has been updated to VIDAA U 4.0. The Smart TV platform has a simple interface and fairly quick response to remote control commands. The shell is intuitive and not cluttered with unnecessary icons. All this adds up to the price of the 50A7300F.

According to the manufacturer, the operating speed has increased by 50% compared to the previous generation TVs. Services may run on Chromecast or Roku depending on the region. From the pre-installed apps in the A7300F, you can find Netflix, Amazon Prime Video, BBC iplayer, YouTube and other Apps.

Some sources indicate different levels of contrast for VA matrices for different diagonals. In the 50A7300F under review, this figure is 4000: 1. And the maximum peak brightness is 300 nits. This is one of the first differences with the A7500F series. Further, the difference can be found in sound power. The younger model is 2×7 W, the largest model is 2×10 W.

The back panel has a headphone jack and an optical output. The sound quality of the built-in speakers is quite decent even in the 50th diagonal of 2X8 W. There are various preset sound profiles. There are more of them than in similar models at this price. But “Standard” is considered the most optimal.

Rear panel ports are easily accessible. There are three HDMI 2.0 ports, one of which supports ARC. A pair of USB ports and Ethernet, but usually the user uses a Wi-Fi connection so as not to get tangled in the wires. As for the picture in the 50-inch 50A7300F in question, which (in our opinion) has an acceptable price tag and normal declared characteristics. Looking ahead, let’s look at the most popular 4K TV screen size. It is probably about 140 cm (55 inches) in size. Therefore, choose the largest size that you can install in the planned location.

On a 50-inch TV, the picture is clear, the colors are bright, but not too saturated. The contrast of the image is quite high, because we are talking about a VA matrix. The level of detail is excellent. But in the inexpensive series, the color depth is limited to 8 bits (8 bits + FRC).

Of course, the picture can be very different depending on the mode you choose. In general, the best playback result is always obtained with the “Standard” preset. But you can try to use “Cinema Day”, “Cinema Night”, “Dynamic” and “Sports”.

If you connect a game console, the 50A7300 will automatically switch to “Game” mode. The most interesting thing is that this preset is not available from most of the menu items. Turning on in manual “Game” mode can be difficult.

Despite the low price of the A7300 series, it has HDR support. When playing content in HDR, the picture is good, but not as bright and impressive as the more expensive models. After all, this directly depends on the maximum brightness, and in this series it has a value of 300 nits, as we talked about earlier.

The display mode switches automatically when HDR content is detected. The presets “Dynamic”, “Day”, “Night” and “Sports” are still available to the user. Unfortunately, this series only has HDR10 and HLG. Local dimming is absent, but this has become the rule for cheap models.

Nevertheless, DLED backlight copes well with the task of constant and uniform illumination of the matrix. The viewing angles for the VA display are very limited. When off-center, the color saturation decreases slightly. Motion smoothing is not entirely “sure”. There are some jerks when viewing panoramic images, but it could be worse. In all diagonals, motion processing occurs at a frequency of 50/60 Hz.

In last year’s versions of Hisense B7300, this was not the case, and the “best” processing of the dynamics could be chosen from the size of the diagonal. The presets for dynamic scenes are: “Smooth”, “Standard”, “Clear” and “Custom”. But there is practically no difference between them.

The TVs from this manufacturer once again live up to the expectations of good models at relatively low prices. Design and constructive solutions are standard for a state employee.

The image quality, due to the low peak brightness and lack of local dimming, is quite decent, but not excellent. Support for HDR standards is limited to the only option other than HLG.

But the operating system is not fun. Yes, it works quickly, but when it comes to installing additional applications, everything is somehow “clumsy” done. Most users use Dstore (unofficial app store) for a variety of Hisense TV software products.