Hisense A7GQ Review: Great performance out of the box Hisense A7G TV series are LCD models with QLED technology. In the hierarchy of models of this manufacturer, the series is located in the golden mean among the lines of 2021.

The A7GQ line in question has a number of features that can only be seen in higher-end TVs from other manufacturers. The price range for the 50-inch model A7GQ from Haysens in June 2021 is about 65 thousand rubles. Consider the review of Hisense 50A7GQ HDR TV as a representative of this series.

It should be noted at the outset that the larger A7GQ series TVs from 55 to 75 inches use an IPS panel. In the 43rd and 50th diagonals, a VA matrix with a frequency of 60 Hz and a color depth of 8 bits + FRC is installed. Large diagonals have the same characteristics except for the contrast level. All models received direct LED backlighting without local dimming. HDR standards are HDR10, HDR10 +, HLG.

Dolby Vision support is indicated only for the A7G series, excluding the Russian segment. High dynamic range performance is limited to peak brightness of 240 to 300 nits. The Hisense A7G series is marketed as QLED quantum dot TVs, although these models do not achieve the full DCI-P3 color gamut for HDR. Last year’s models received positive reviews for both Hisense build quality and price. But the A7G series in question meets its budget level thanks to the use of plastic for the body and the design of the Hisense 50A7GQ TV in general. The model itself is beautiful. A dark metal finish that looks a lot more expensive than it actually is.

The 50A7G TV stand is well designed and easily attaches to the cabinet. There are some cable management features built into the stand. The stand color is slightly different from the rest of the TV. The model is made in a metallic dark gray with a greenish tint. The material is plastic.

The interface of the Hisense 50A7GQ model is located at the back. The ports are located on the side and perpendicular to the body. Of the two USB ports, one is USB 3.0. There is a 3.5mm headphone jack. The official website announced the presence of a pair of HDMI 2.1 (ALLM, VRR) and HDMI 2.1 (eARC, ALLM, VRR) ports. But for some regions, there is information on only three HDMI 2.0 ports. RF inputs are DVB-T2 and for a satellite dish.

There is also a LAN connection and digital audio output. As for the HDMI ports, they are recognized by the Murideo Seven G as standard 2.0. But they do support some HDMI 2.1 features such as eARC and ALLM. Hisense also claims that there is support for VRR at 48-60 Hz, but this requires separate confirmation.

The supplied remote control is a traditional version with buttons arranged in a logical way. There are easy-to-use keys and dedicated one-touch direct access to the Freeview Play, Netflix and Prime apps. The remote control is easy to use and fits well in your hand. As we mentioned earlier, in the 50-inch version of the A7GQ, unlike the large sizes, which uses an IPS matrix, a VA panel is used. This means performance will not be the same between the 50- and 43-inch and larger models.

But back to 50A7GQ. This TV is equipped with a 60Hz VA panel (8 bit + FRC). Black level of 0.05 nits with a peak brightness of 240 nits for a 4800: 1 contrast ratio. However, the manufacturer claims a maximum brightness of 300 nits. A7GQ series models have FALD but no local dimming. Of course, this kind of backlighting is considered to be more advanced than side-lit TVs.

Panel uniformity is reasonable, but with a darker center despite the FALD. Sometimes, with some content, you may see a lighter image at the bottom edge. This is noticeable when you are sitting right in front of the TV. With a 5% decrease in brightness, the perimeter of the screen is again slightly brighter than the center. But the panel is clean and without the obvious Dirty Screen Effect (DSE). Therefore, sports programs look good.

Viewing angles are a clear minus of 43A7GQ and 50A7GQ, so don’t use small diagonals in the living room. A deviation from the center by 20 degrees leads to a change in gamut and colors. In this case, the screen is blurred as it moves away from the central axis. When placed directly in front of the screen, the image quality is very good. The larger screen sizes in the A7GQ lineup received IPS panels, and they have better viewing angles, but poor contrast.

The motion handling is good enough. For the most part, 24fps content looks decent, with only occasional jitter when some settings are off. Standard content looks correct with motion processing disabled. Although the edges on moving objects may have artifacts. When using motion processing, a soap opera effect (SOE) appears with various interpolation modes.

Depending on the level of interpolation used, artifacts become more or less in dynamic scenes. As always, the recommendation to turn off the Ultra Smooth Motion settings for movies remains in effect. But for dynamic content, you have to tinker with the settings.

By the way, “soft picture” is observed on some SD channels of good quality, as with DVD playback, but with HD 1080i or 1080p. The reproduction here is excellent with solid straight lines and only slight signs of noise around the edges of objects. But, as a rule, everything depends on the input content.

From the factory, the SDR picture quality in Cinema Night Mode looks pleasing to the eye with decent natural colors and lifelike skin tones. Black levels are good when viewed in a dark room. For VA panels this is the norm, although there is a slight change in black in darker scenes. In dim light conditions, black levels are satisfactory. 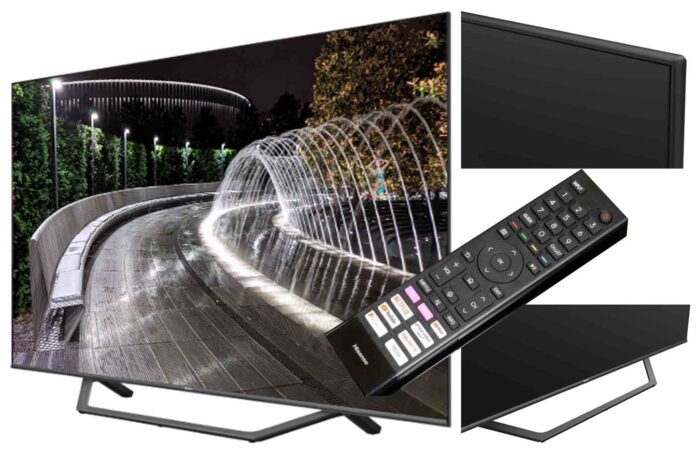 At wide viewing angles, blacks can appear milky blue or dark blue, losing deep blacks. As such, the 50A7GQ is better suited for normal viewing conditions with ambient or side lighting where these problems are less noticeable. The Hisense A7G series has proven to be a good option when used as an everyday model, but is not a screen for watching movies in the dark.

HDR content is a problem for the A7GQ due to the lack of maximum brightness and lack of local dimming. If the model supports Dolby Vision , then this content is the best HDR option available. Dynamic metadata ensures correct highlights and better mid tones, adding some depth to the image.

The Hisense A7G series of TVs still tries to give any dynamism to the picture as much as possible, but it falls short of screens capable of producing more brightness. The picture with HDR content is obtained with a limited dynamic range in terms of image brightness, albeit with a wide color reproduction. Colors look natural and lifelike with certain HDR settings in the menu. Skin tones look right. But on the arc side, most TVs at this price point can be brighter than the A7GQ.

The good thing about Smart TV is that VIDAA U5.0 provides a decent range of apps and services, and it also works pretty well. From time to time, you can observe the system slowdown when opening “heavy” applications, but in general the OS works as expected. Streaming quality is normal. The menu system works well and is logically laid out in an intuitive way, with all the necessary calibration controls. However, some of the settings do not work as expected.

As stated above, Hisense A7G uses HDMI 2.0a ports , but they support some HDMI 2.1 features: eARC, ALLM and VRR at 48-60Hz. VRR capabilities still need to be tested additionally, but all other features work. The input lag is at 4K @ 60Hz at 14ms, which is good enough for console gaming. But HDR performance in gaming mode is again an issue for the A7G due to the lack of brightness.

Hisense A7GQ models have two speakers built into the case with a power of 10 watts. There is a Dolby Atmos decoder and broadcast stereo sound. Additional settings available through the menu allow you to adapt the sound to your room, but this is strictly for the two-channel version.

In general, the sound quality is suitable for everyday viewing, but the models lack a large soundstage or an additional subwoofer. Dialogue is understandable in all types of content, but the overall sound is a bit limited and lacks real dynamic range. As the saying goes, it’s perfect for daily soaps, news channels, or documentaries. Therefore, it is recommended to use a separate soundbar for watching movies.

All in all, Hisense A7GQ series are LCD TVs with a reasonable price. Models are not designed for “critical” movie viewing in a dim environment. They are not actually HDR TVs, although they can reproduce HDR content, they just are not bright enough to fulfill this role.

Considering all that was said in the 50A7GQ review, Hisense is a good LCD model with LED backlight for a second room or kitchen. The model has some decent gaming features and low input lag.

The 50A7G TV has good picture quality out of the box, which although not reference or high fidelity. Colors look natural with lifelike tones, and motion processing is suitable for most sources. However, according to some opinions, the price category is slightly overpriced.