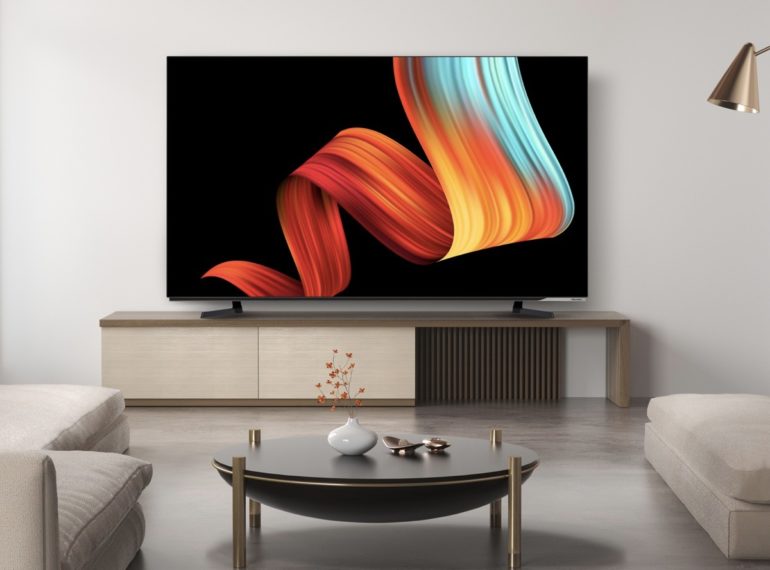 Hisense A8G is a 2021 4K HDR OLED TV series from a Chinese manufacturer. It comes with Dolby Atmos and HDR10+ features, but no IMAX Enhanced support. The speakers sound surprisingly good and the smart platform is quite responsive. True, there are some minor issues, but overall this series is very competitive.

Theoretically, the A8G series from Hisense is presented as a Smart TV with an OLED display in 55 and 65-inch diagonals. Unlike some competitors, there are no compact 48-inch variants or giant 77-inch versions in the lineup. In the review of Hisense 55A8G 4K HDR OLED, we will consider a model with a diagonal of 55 inches, which is presented on the official website.

Before considering the A8G series, you should pay attention to the Hisense A9G TV line. And if someone thought that the name of this series of TVs is familiar, then this is true. Sony’s 2019 family of 4K OLED models included a model with the same designation Sony A9G . When searching for Hisense in the SERP from Google, there will be quite a lot of results for the namesake from Sony. The main difference between the A9G series and the considered Hisense A8GQ is the matrix frequency of 120 Hz.

But that’s not all. In Europe, along with the Hisense A8G series TVs, an “improved” version is presented – these are the Hisense A85G models. The main functionality of the A85G is kept at the A8G level, but the matrix supports the coveted 120 Hz and the design has been changed. It should be pointed out that the price difference between Hisense A85G and A8G is only 100 euros. And it’s not that expensive for the Hisense 55A85G model with a 120Hz screen. Naturally, when buying, you should give preference to the Hisense A85G series. 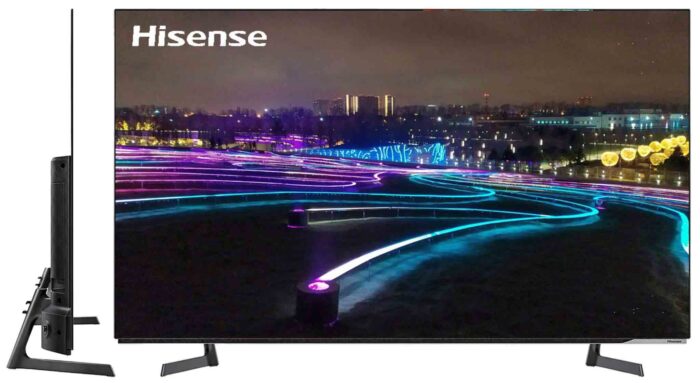 There is an opinion that Hisense could borrow some solutions from older Sony models as the basis for the design of the A8GQ series. There is no screen tilt. The upper part of the Hisense 55A8G screen “hangs in the air”. At first glance, it seems that the model is frameless. But this is not so – there is a small and elegant edge, but it is almost invisible.

The stand is made in the form of two L-shaped legs. They are located at a certain distance from the edges of the screen and provide a secure fixation of the Hisense 55A8G TV on a horizontal surface.

The back side of 2/3 of the screen size has a certain depth. This is where the motherboard of the TV is located. Speakers and interface inputs are located in this case. Most connections are made to the side, but there are also rear connections.

The connections are on the left side of the Hisense 55A8G, with most of them facing the side. This interface part is closed with a decorative cover. The rear connections are not protected by decor, but the design of the stand allows you to fix the cable connections, and everything will look neat.

There are four HDMI inputs (three side and one rear) supporting 4K@60Hz. Among them there is a pair of HDMI2.1 (ALLM, VRR), HDMI2.1 (eARC, ALLM, VRR). Oddly enough, some sources do not mention HDMI2.1 in Hisense A8G, although the official resource denies this and positions it as a TV with HDMI 2.1.

There are also terrestrial and satellite tuners, an AV input (adapter included), an optical digital output, an Ethernet port, two USB ports (2.0 and 3.0), a headphone jack and a CI slot. As for wireless connections, the user gets built-in dual-band Wi-Fi IEEE 802.11 a/b/g/n/ac (2.4G and 5G) and Bluetooth 5.0.

The remote control is a stylish piece with a long, thin shape and an attractive black and silver two-tone finish. It is comfortable to hold and easy to use with one hand. The remote is well designed, with sensible button placement and quick access buttons to the main streaming services.

The Hisense A8GQ TV series runs on the latest VIDAA U 5.0 smart platform. Although it is not as bright and comprehensive as some of the competitors. The Smart TV system is intuitive and quite effective. It is based on a full-screen home page reminiscent of the latest version of Android, with all the apps, features and information laid out in an easy to understand and navigate way.

Apps appear in the center of the home screen, with content related to the currently highlighted app displayed just above. Beneath the apps are rows of content based on recommendations, and at the top are icons for search, input, settings, posts, and EPG.

The interface is nice, customizable and easy to navigate thanks to the responsive remote control. The platform has support for Amazon Alexa and Google Assistant (may not be available in all markets), making the 55A8G TV a full-featured, voice-controlled smart assistant.

There is a decent selection of streaming apps including Netflix , Amazon Prime, YouTube, Britbox, and Rakuten TV. All this is complemented by a well-integrated EPG. Only the absence of Disney + and Apple TV + is disappointing. The specification’s inclusion of support for Dolby Vision and Atmos maximizes the Netflix experience. 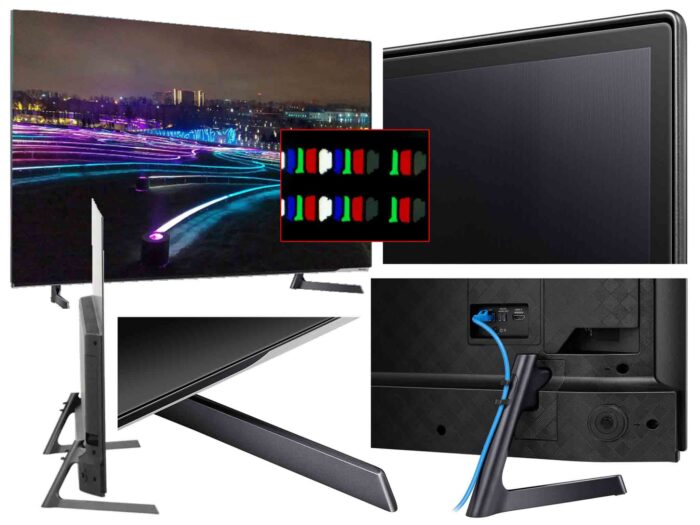 The Hisense A8G uses an LG Display panel like any other OLED TV on the market today. Therefore, the series in question retains all the usual advantages such as wider viewing angles, perfect blacks, superb pixel-perfect shadow and light detail.

In addition, the overall screen uniformity is excellent, with no banding, dirty screen effect, or extra color cast. Night mode “Cinema” achieves the most accurate picture setting out of the box, with overall errors below the visible threshold.

By the way, if you have the necessary measuring instruments, a template generator and the appropriate software, you can even better adjust the accuracy of the picture. But even without additional calibrations, the image of the factory setting of the average user will completely satisfy.

Although advanced users are of the opinion that the gamma could be better, and the color management system is a bit rough. But in general, the image quality of SDR is very good. The colors look quite natural. Even lower resolution content looks crisp and detailed thanks to decent scaling and processing, including Hisense’s AI-powered “Hisense Alphonso” auto mode.

The motion control in Hisense’s A8GQ is very good. The Ultra Smooth Motion menu offers a choice of Smooth, Standard, Sharp, Film and Custom modes. For movie buffs, turn it all off and avoid director mode, which will cause judder.

Sports events can be viewed in smooth mode, which works quite well. Custom mode allows you to experiment with different shake and blur settings in action scenes.

The Hisense A8G series excels at wide dynamic range and offers a full range of HDR10 , HLG, HDR10+ and Dolby Vision options. Support for IMAX Enhanced has not been officially announced.

For HDR10 and HLG, night mode is the most accurate option, while for HDR10+, Cinema is the best choice. Dolby Vision should select “Dark” for some content. Adjusting image brightness based on dynamic metadata is useful when watching general broadcasts. There is also a user mode, but it seems redundant.

Color performance is also good. It covers 98% of the DCI-P3 color space. Here we get all the benefits of the wider HDR color gamut. These colors are displayed correctly. As a result, the 55A8G TV does a good job of handling the “exaggerated” colors that are used in surreal moments. 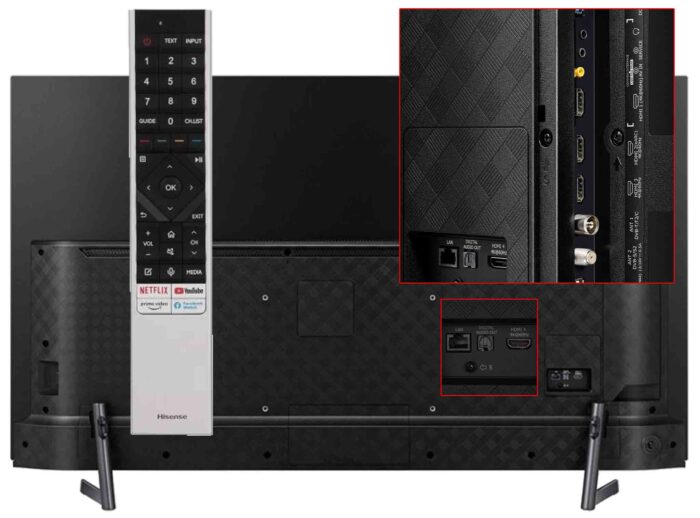 The Hisense A8G series of TVs is good enough for gaming, but if you’re using one of the next generation consoles, the Hisense A9G might be a better option. The HDMI inputs support ALLM and the TV switches to game mode when the console is detected, but no 4K@120Hz. In this series, you have to be content with only 60 Hz.

Game Mode uses the current picture settings, but features that optimize input lag, such as Motion Enhancement, are greyed out. Although the latency in game mode is significantly less, it is 28ms. The manufacturer claims less than 35 ms. This figure is still much higher than most competitors. Many models offer a latency of less than 10ms.

However, PS4’s HDR gameplay was pleasantly responsive, with smooth motion, detailed images, and crisp highlights. As always, there is a minimal risk of screen burn, but you are unlikely to run into problems if you watch a variety of content and do not pause games for several hours in a row.

Hisense’s A8G TV lineup sounds surprisingly good, especially considering it’s a thin OLED panel. The soundtrack comes from the speakers 4x10W + 2x10W (built-in subwoofer at the back). There are a pair of upward-firing speakers that support Dolby Atmos and DTS Virtual X. Adding an extra amplifier makes for an amazing 2.1.2-CH system.

Unfortunately, there are no rear channels, like the Hysens A9G. In the ninth series, there is an additional panel under the TV screen. Therefore, the focus of the front soundstage is slightly blurred. On the other hand, there is real support for Dolby Atmos – real upward-firing speakers. There is a genuine feeling of the frontal upper channels on the face. As far as bass is concerned, the sound system cannot compete with a separate soundbar and a dedicated subwoofer.

Hisense A8G is an impressive 4K OLED TV, well-made and feature-packed. While image fidelity is generally very good, the 20-point white balance is off and gamma is a bit capricious. HDR tone mapping can clip glare in content. But a 60 Hz matrix nullifies all the advantages of OLED.

But on the other hand, it will certainly be difficult to find a similarly priced OLED model that supports Dolby Vision, HDR10+, IMAX Enhanced and Dolby Atmos. Add to that a 2.1.2-channel sound system and an efficient intelligent platform. Plus good overall performance in SDR and HDR. Therefore, A8GQ from Hysens is indeed a very competitive option for a modern TV.