Official partner of the European Football Championship, Hisense Co. Ltd. is an increasingly important player in the consumer electronics market. And just like other Chinese companies, it is making a lot of efforts to move forward in terms of increasing sales. Take the licensing of the Sharp brand back in 2015.

Although Hisense TVs have not enjoyed much respect in the past, sales have picked up somewhat in recent years and are now well past the average. Therefore, in our opinion, the time has come to get acquainted with the TVs of this brand in more detail. Let’s start with a review of the Hisense H43B7100 as a representative of the ultra-budget 4K series of smart TVs.

There is practically nothing to write about the overall design of the H43B7100 TV. Around the screen are decent bezels with a small bevel, at the bottom – the Hisense logo, in the middle – where expected. It’s safe to say that Hisense prioritizes functionality over beauty, but that’s not necessarily a bad thing.

The depth of the TV, due to the use of direct backlighting, cannot boast of a minimum, amounting to about 8.5 cm. The body is completely plastic, black, rests on a stand in the form of two spaced legs with a rubber gasket to prevent slipping. If there is no wide TV stand, you will not have to be upset – the legs can be set closer to each other.

The wall mount is via a VESA bracket. Almost all commutation connectors look sideways (with the exception of the analog video input). Therefore, there should be no problems with installation as close to the wall as possible. All in all, the Hisense B7100’s design by no means looks bad, but it is very versatile. If you are looking for a super stylish TV, then this option may not be for you.

There is little to admire about the picture when dealing with budget TV models. The transfer of the device to the low price segment always entails a decrease in the technical specification. Therefore, the first thing you want to pay attention to when looking at the Hisense B7100 is that HDR is only nominally supported.

And where does the real support for high dynamic range come from with a peak brightness of the LCD panel of 200 nits. However, the B7100 can play the most common HDR format, HDR10, from streaming services like Netflix and Amazon Prime, and of course Ultra HD Blu-ray players.

It also supports Hybrid Log Gamma (HLG), a common HDR broadcast standard.
The picture is “pulled” by the VA-matrix, which, unlike the IPS panel , has good contrast and a decent depth of black. This makes it possible to adequately display dark scenes even in a dark room – blacks look convincingly black, not milky gray.

When displaying moving objects, there are small artifacts. True, the company has applied the Smooth Motion smoothing system, which evaluates and compensates for motion in dynamic scenes. But there are practically no settings that improve the display of this movement. The response time of the order of 50ms is clearly too long for using the B7100 as a gaming monitor.

Scaling standard definition content to Ultra HD is satisfactory. The UHD upscaler video analyzer compares the colors of adjacent pixels and compensates for them to create a smooth color transition. This makes even the old VGA 640×480 format look refined and refreshed on the B7100.

In some ways, the performance of the B7100 is due to the high-end Hisense MSD6886 quad-core processor, which seems to be more important for smart features than for proper 4K performance. 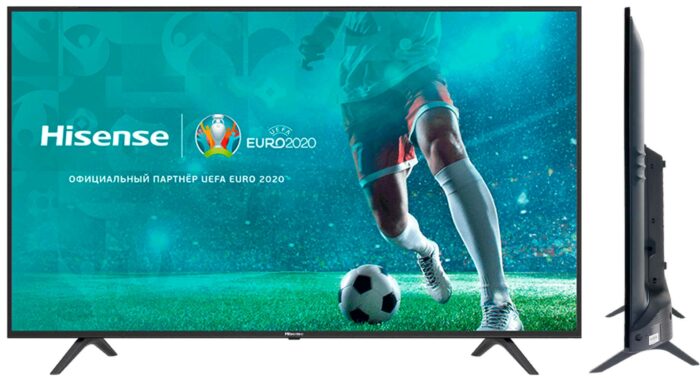 In budget models of 2019, including the Hisense B7100 series? Hisense’s new Smart TV OS presented. Smart TV features have never been easier to use. With a simplified interface design that allows you to effortlessly switch between all your favorite apps and devices in three steps or less, Vidaa U’s operating environment makes it easier and faster to enjoy a world of on-demand entertainment.

Compared to the previous generation, now using the 3rd version of VIDAA U, the system provides faster boot up and smoother operation. Any application or function can be accessed with just 3 key presses on the remote, making it easy to navigate your entertainment. All that is missing is voice control.

All streaming apps (including YouTube) have convenient shortcut buttons on the included remote. And they all also appear on the home screen, which consists of a single horizontal scroll bar to which you can add your favorite and most used apps. It is more functional and, most importantly, easy to use.

Although we cannot tweak the aforementioned motion settings, there are different modes for sound. You can choose “Standard” or “Musical” (there are not many differences between them) as a preference for the best tonal balance and clarity.

The TotalSonics mode adds clarity and makes dialogs less flat and squashed. But still, we cannot say that the sound performance of Hisense B7100 is in perfect order. Although it is understandable that a 2×7 W TV speaker system is not intended for normal soundtrack of films. So it is better to use the services of an external soundbar – a soundbar. Compared to last year’s model Hisense A6100 , the analogue of which is B7100, there are no special changes in switching capabilities. Except that both USB ports are now version 2.0. There are also two HDMI 2.0 connectors and one HDMI 1.4. One of the connectors supports ARC – Audio Return Channel .

The sound is output either digitally via optics or via a mini-jack to headphones. Internet connection is possible by wire or through built-in Wi-Fi. Bluetooth is missing. There are two antenna sockets – for terrestrial TV and for satellite. And finally – analog composite video input.

The Hisense B7100 (H43B7100) TV is quite possibly a significant step forward compared to similar TVs in its class. It has laid the foundations needed to display great HD and SD content, as well as a decent grasp of 4K footage.

I think it is not necessary to list the disadvantages – it is also clear that many specifications in this low-budget model are presented nominally. Therefore, if your main task is to keep the budget, do not be afraid to buy this model. If your focus is on getting fantastic 4K HDR images, then you’ll have to sacrifice diagonal or raise more funds.

Framework Laptop: Modify your laptop to your needs