The models in this line are made using quantum dot technology, although the Hisense E7G can be called entry-level 4K QLED TVs. This series lacks many of the features found in the higher-end Hisense.

The E7G series has no local dimming, no black frame insertion, and support for a wide color gamut is partly in line with reproducing quality HDR content. The E7G models are equipped with a VA panel, which indicates the ability to display deep blacks, so the model reviewed in the Hisense 50E76GQ QLED 4K TV review is great for watching movies in dark rooms.

Hisense E7G TV series includes a couple of models available – these are 50E76GQ and 55E76GQ. Both models have decent specs in terms of image processing, but are actually not bright enough at their peak. And despite the anti-glare “hardware” technology, some common problems can arise in a well-lit room.

There were no additional gaming perks in Hisense’s E7G series. Input lag is slightly higher than most brand-name 4K TVs, but satisfactory for most gamers. Despite the fact that the Hisense E7G series in question are 4K TVs, there are some problems with displaying UHD content.

The Hisense E76G series has a simple design, although the rear case has been slightly modified from last year’s models. Hisense 50E76GQ TV is made entirely of plastic. It has thin borders on three sides. The lower hem is wider. It is believed that this design is called frameless.

What can be distinguished in the design solution is the stand and its installation. The standard Y-shaped feet are positioned at the optimum distance from the edge of the screen. Unlike entry-level TVs from this manufacturer, there is a semblance of Q-design.

For symmetry, the deeper lower back is located almost the entire width of the case, although the motherboard itself takes up a small portion of this space. We can say that the QLED Hisense E76G in terms of design has some zest, although there are similarities with similar 2020 models. 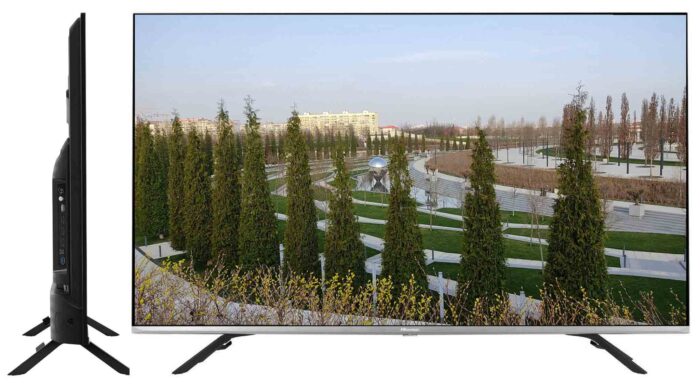 Let’s start this paragraph with contrast. The Hisense E7G series of TVs have a good contrast ratio that we are used to seeing in VA panels. Models provide deep blacks, but don’t forget about ambient lighting.

The default “factory” contrast ratio is stated as 4000: 1, although in practice this figure can reach 4600: 1. For VA matrices, these are not boundary numbers, often it depends on local dimming. Unfortunately, the E7G series models did not receive this feature. Therefore, the native contrast level can be considered good.

The brightness in SDR content playback mode does not really depend on the quality of the input data. This parameter when scaling ranges from 220 to 260 nits. Therefore, Hisense E7G series has a low SDR peak brightness. The brightness is not enough to combat glare on the screen in a well-lit room. But the TV 50E76GQ has a “constant” brightness.

As for the HDR mode – with the right content, the maximum brightness slightly reaches 300 nits. In a 10% window, this figure is slightly higher – 305 nits. Agree that for models with quantum dot technology, this is really not an outstanding indicator. Similar brightness values ​​are obtained in game mode. Therefore, you will not see a true HDR picture on a TV screen. 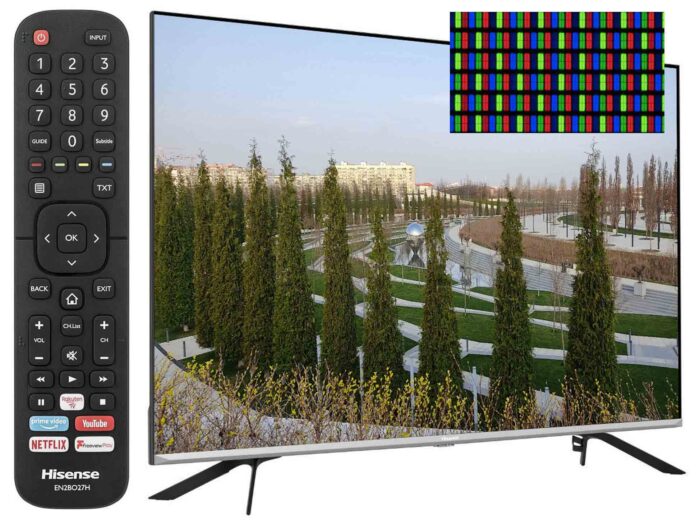 Color accuracy is decent enough out of the box for a TV of this level. Most colors, with the exception of reds, can be slightly inaccurate (go to the menu and tweak). The color temperature is “slightly” warm, which gives the image a reddish yellow tint. The gamut of colors is pretty good, but dark scenes can seem too dark.

Hisense E7G series TV uses BGR sub-pixel layout, which can sometimes display poor quality text. This is especially noticeable when a TV is used as a PC monitor. Color depth 8 bit + FRC and that says it all. The native frequency of the matrix is ​​60 Hz with Direct LED backlighting.

For its class, the E7G series has a normal response time. In the specification, this value is indicated as 20 ms. In fact, the pixel response ranges from 5.9 to 17.8 ms. Therefore, there may be some blurring of the picture in dynamic scenes. In addition, duplication of the image contours is sometimes noticeable due to the flickering of the backlight. 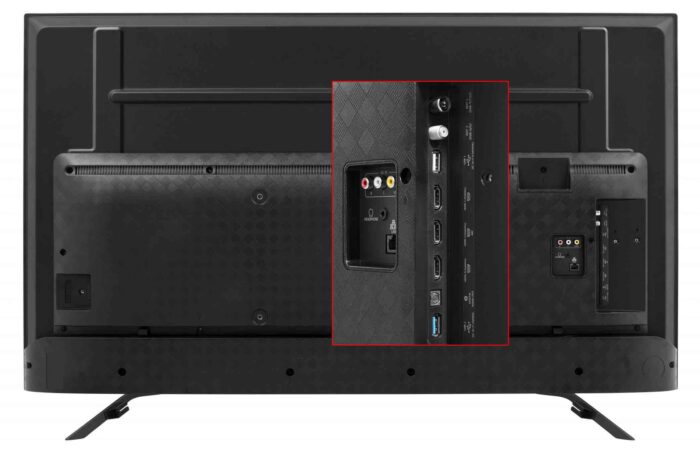 Let’s not go deep into the controversy about which operating system is currently the most preferred in 4K TVs. Note that there are Hisense models on Android TV, but the models of the Russian market are still equipped with the updated VIDAA U5.0 OS, including the series considered in the Hisense E76G review.

Despite the fact that the Hisense E76G series is located in the hierarchy above the low-budget entry models, the manufacturer adopted the standard 2.0CH sound variant. The 50E76GQ is equipped with a pair of speakers with a total power of 20 watts. The sound system specification includes support for Dolby Atmos (Dolby MS12), but for realistic sound you will need an additional soundbar or AV receiver of your choice.

Overall, the Hisense E7G is a decent 4K TV. This option would be a good choice for watching movies in a darkened room because it displays deep blacks at altitude. However, the series clearly lacks peak brightness for comfortable viewing of HDR content.

Unfortunately, HDR content won’t show up on screen as it should on expensive models due to the color gamut. In the end, the brightness of the E76G series leaves a lot to be desired. Due to the applied VA matrix, the viewing angles are not as great as those of IPS or ADS TVs. For fans of game consoles, a decent response time and a fairly low input lag will be a clear plus.