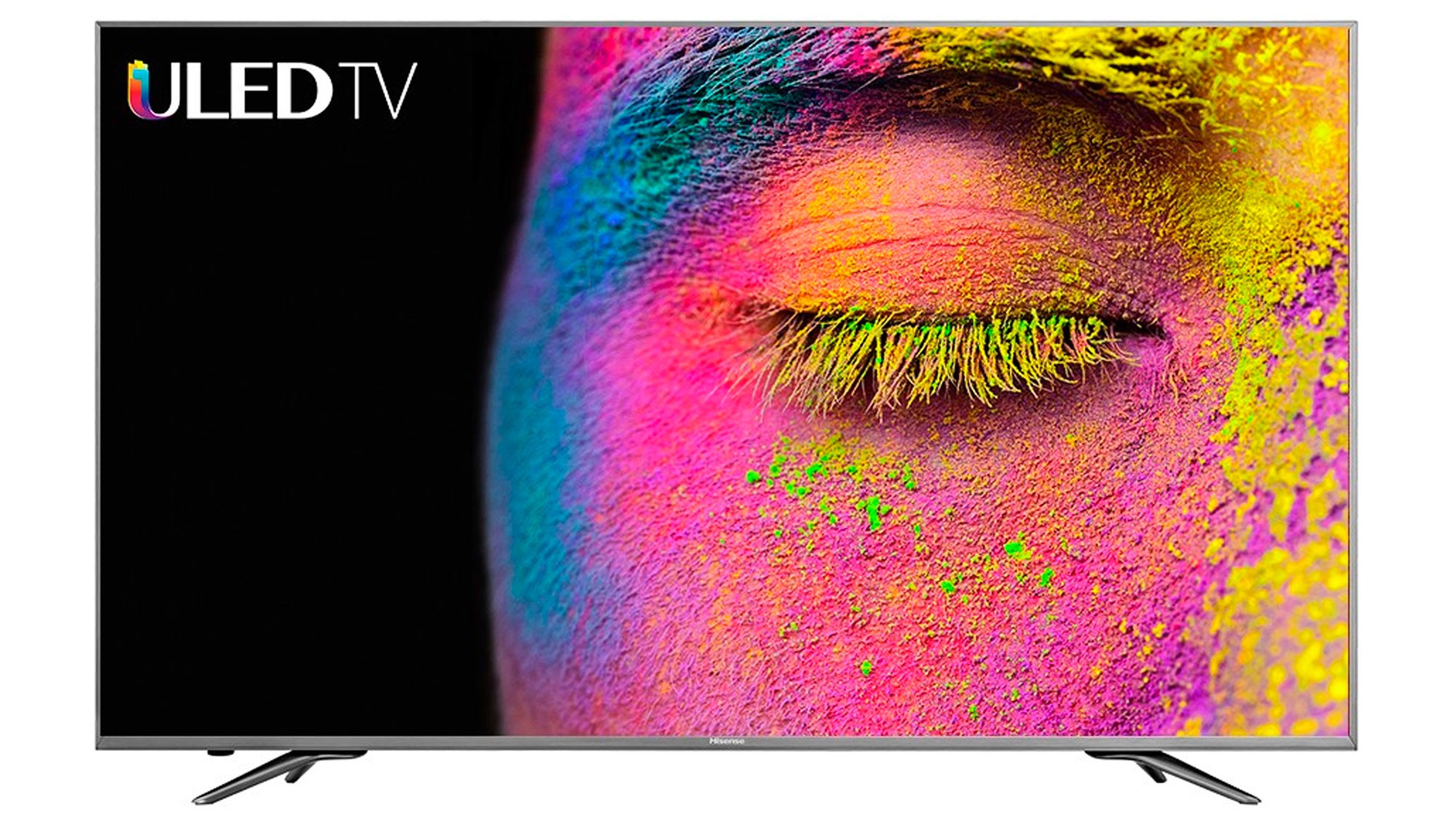 Against the background of well-known and popular brands, you can find Hisense TVs with interesting specifications and for little money. Therefore, we bring to your attention a review of the Hisense H55N6800 from this manufacturer.

So, there is a deferred amount for the purchase. All that remains is to take a closer look at the Hisense N6800 series of TVs, where the manufacturer’s great ideas are embodied in the well-thought-out 55N6800 model.

The appearance of the N6800 series is almost identical to the A6500 series . The difference is the color of the thin border around the screen. In the N6800 series it is the usual gray color, while in the A6500 it is silver. The legs of the Y-stand are set wide apart. To install a 55-inch Hisense H55N6800 TV, you will have to find about a meter of horizontal surface.

Fortunately, a VESA mount is provided if your dream is to “nail” your TV to the wall. The rear of the TV has been slightly redesigned from the new model, but the location of the connectors remains unchanged. Apparently, the engineers considered various options, but remained with the opinion that everything should be “standard”.

This is perhaps the only thing that brings us back to the mid-2000s. The remote control is comparatively large. It can conveniently operate the various functions of the H55N6800 TV. But the click when the button is pressed can be annoying. Otherwise, there are no complaints about the remote control.

Vidaa U as a Smart TV platform

The N6800 series surprises with a well-designed Smart TV platform. The 55N6800 TV has a Vidaa U interface with various streaming services. BBC iPlayer is available. Netflix and Amazon Video are available for installing additional applications from the branded store.

The Freeview Play service is powered by an EPG. Through this application, you have access to simple terrestrial television broadcasting and many other goodies. This operating system is well rolled back and competes with Samsung and LG platforms.

When you press the “Home” button on the remote control, a colorful carousel of icons appears in the center of the screen. The icons correspond to applications and various features of the TV. When you click the corresponding icon, the selected item is displayed on the full screen. In the settings menu, there are options to control the settings for sound playback, image playback, selection of the required interface, and so on.

Of course, the remote control has separate buttons for calling Netflix or YouTube, so this is a nice plus for fans of Internet resources. In general, the Vidaa U system is not as sophisticated and advanced as Smart TVs on TVs of leading brands. But a simple, clear interface meets all consumer requirements. 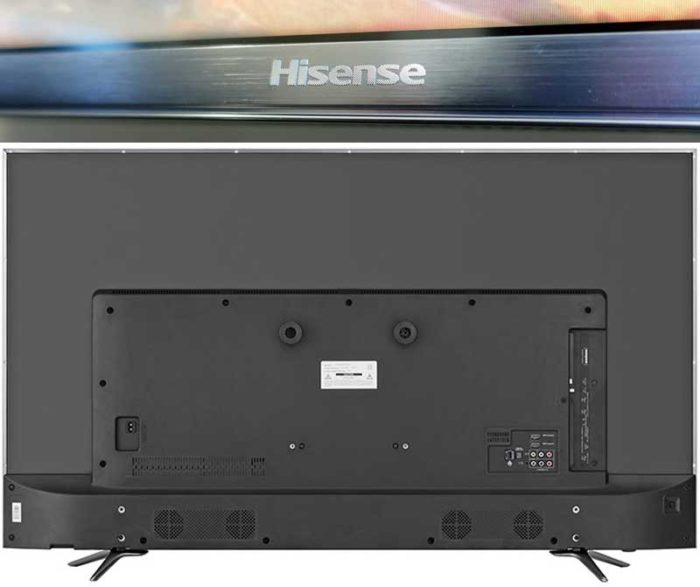 With a few adjustments for the standard setting, the N6800 series is capable of displaying a pleasing image upscaled from HD video. Blu-ray source produces good colors after processing. The image looks natural and has a positive rating. The contours are clear, there is good detailing of small details.

Black levels are impressive for this LCD TV, although more expensive models produce more grayscale. Do not forget about the viewing angle, it is better to be located directly in front of the screen. After all, the series has a VA matrix (Edge-LED backlight) with a color depth of 10 bits (8 bits + FRC). Therefore, with large deviations, you will notice a significant drop in the color intensity and contrast of the image.

The panel is equipped with Edge-Lit side lighting. The uniformity of the backlighting is quite good, but slight highlights can be seen at the edges of the screen with a completely white image. No clouding of the image was noticed. The dynamics processing is not bad (PCI 2200, while the A6500 has PCI 1800), despite the fact that the matrix is ​​only 60 Hz.

Sometimes the motion processing function should be disabled in the menu. Then it helps to smooth out some artifacts. This help is especially noticeable when watching Netflix. In general, all these settings for different content are worth trying and choosing the most suitable option for yourself.

The scaling feature (Upscaler) works pretty well. Standard content is automatically detected, softly handled and displayed. There can be inaccuracies when upscaling HD content, but when viewing real 4K there is naturally more subtle detail.

This is an axiom for any 4K TV and there is nothing surprising about it. Thus, it can be said that the HD and SDR performance of the N6800 series is good. Crisp images with plenty of detail and natural color balance. 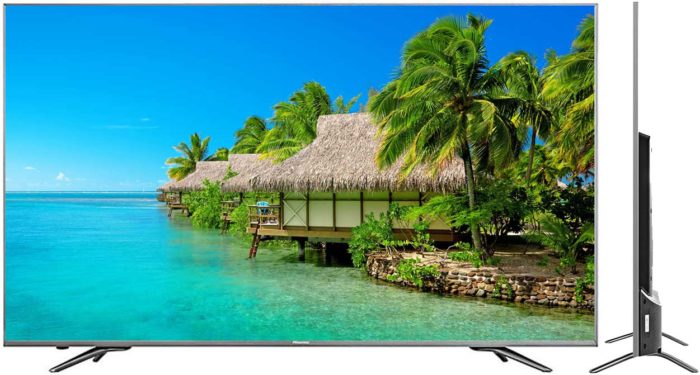 With such a fantastic price tag on the N6800 series 4K TVs, there is perhaps no better competitor to be found. There is additional image depth and subtlety in scaling HD content. TVs do a great job with Netflix 4K data, colors look great on screen.

The best mode for reproduction is Day mode with a properly set color temperature. This mode displays the most accurate image processing results. The biggest problem with the N6800 series is maximum brightness. This is a problem not only for Hisense, but for any other manufacturer in this price range. The buyer is always offered a choice of either inexpensive but low brightness, or expensive but excellent peak brightness.

In the N6800 series under review, this figure is far from the cherished 1000 nits, which are necessary to get the “stamp” from the Ultra HD Alliance. The value of the peak brightness, which is “laid down” by the manufacturer, is only 350 nits. Of course, this affects the quality of HDR content at 4000: 1 contrast ratio.

Lacking the desired peak brightness (1000 nits or more) in its arsenal, the N6800 series reproduces HDR sources less efficiently. And although HDR is automatically turned on when an HDR source is detected (the TV supports HDR10 or HLG), the brightness is set to maximum. HDR content may appear dimmer than SDR upscaling. Therefore, you will most likely prefer HDR night viewing (or in a darkened room).

However, the wide color gamut is noticeable and gives HDR content a richer, more vibrant color gamut that is clearly different from the SDR source. The only wish is more brightness, but this is not available “from the manufacturer”.

The answer to the question “do I need to buy a soundbar to improve the sound?” Almost always sounds – yes, but the 55N6800 TV generally sounds good. If you do not have the budget to buy a soundbar with a TV, then you can opt for the “native” sound.

For its mid-range price range, this is the best solution. The soundtrack, despite the fact that only a pair of 10 W speakers are installed, is clear, dialogues are reproduced well. The basses, of course, are not enough to show any authoritative concert accompaniment.

But DBX and Dolby Audio with the MS10 make up for the 55N6800’s audio shortcomings. For day-to-day viewing, the installed components are sufficient, and a separate soundbar requires an additional investment in your home entertainment system. 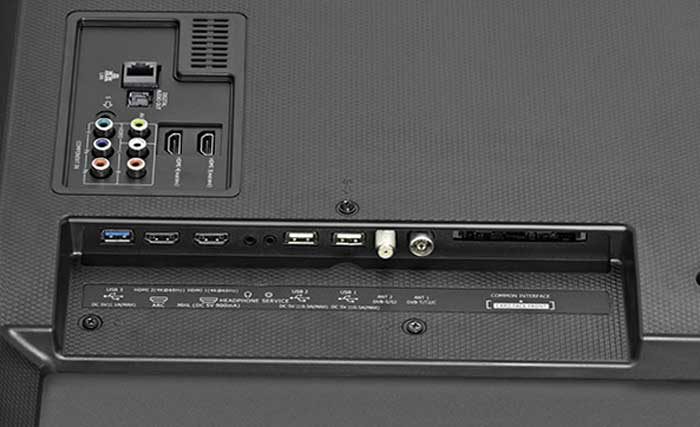 There are four HDMI ports, but only two of them are HDMI 2.0 versions capable of playing 4K @ 60Hz HDR video content. Remaining pair of HDMI 1.4 standard with 4K @ 30 Hz bandwidth. The set of USB ports consists of three connectors, as well as component and composite inputs. In the presence of a headphone output and an optical sound output for connecting a soundbar.

For watching TV there are Freeview HD and satellite tuners. There is a wireless Wi-Fi network and an Ethernet port. All in all, the N6800 series is equipped for all occasions. Remember the dissatisfaction of users with fresh low-end TVs from leading manufacturers – constant exclamations about the lack of ports …

If at this price the N6800 series from Hisense seems rather weak to you, then the compromise may be the Samsung MU7000 series TVs , where the brightness is slightly higher. We are by no means trying to compare Samsung TVs. But the MU7000 produces amazingly bright and punchy images that outperform the N6800 series in HDR mode.

Another example would be a Philips PUS6262 TV with good specifications for a 4K model. The brightness level is on par with the N6800 in question, but Philips has additional features like Ambilight.

As for the Haysens models, the N6800 series can “resist” in the competition, perhaps, the series of a higher class. These are the line of flagship TVs NU9700 and NU8700, which we plan to review in the future.

The entire Hisense N6800 series is undoubtedly of some interest due to its excellent price-performance ratio.

The design of the model is slim, looks great. Nice color palette. The TV is properly “old-fashioned” equipped with various interfaces and has an interesting Smart platform. But from the arc side, the series is faulty. The main problem can be called low peak brightness, which does not allow all the benefits of viewing HDR content to be revealed.

But to be honest, we would recommend this series as a 4K starter kit for your home. After all, we know of inexpensive models from leading manufacturers that have not grown to the level of Hisense N6800 in their last year’s models.

Advertisement
X
Subscribe to get the best Tech news and reviews of the week.
By signing up, you agree to our Privacy Notice and European users agree to the data transfer policy.
Close
01/16/2019