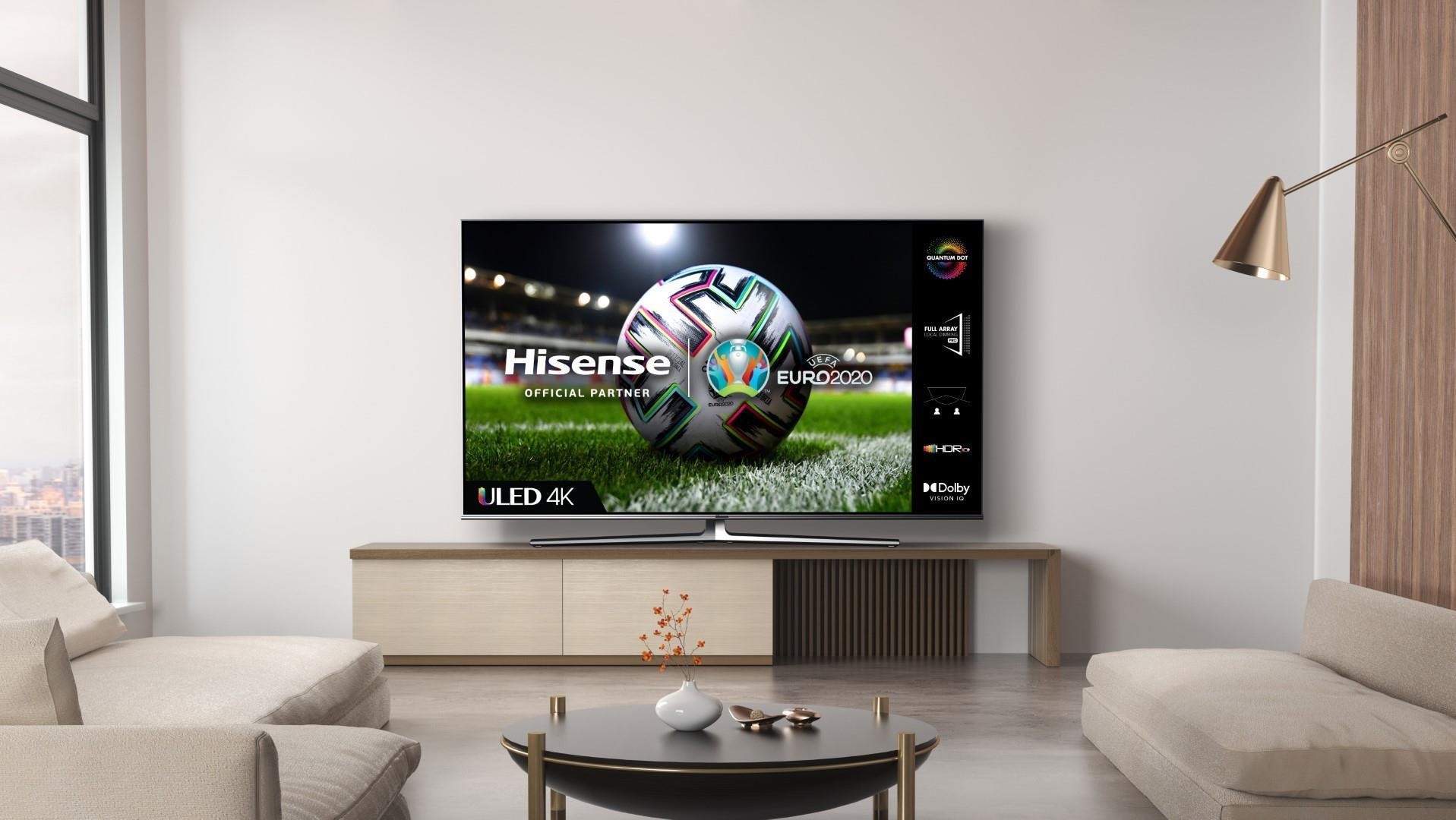 Additional bonuses include support for Dolby Atmos, Dolby Vision and HDR10 +. There is no JBL Audio sound system, as was the case in last year’s U8QF series. The new Hisense U8G line is available in two screen sizes 55 and 65 inches. Consider the review of Hisense 55U8GQ 4K ULED TV as a representative of this series.

Hisense’s U8GQ series is powered by a quad-core processor and has a claimed peak brightness of 1,000 nits. It supports wide color gamut DCI-P3 and Rec. 2020 in HDR10 and Dolby Vision standards. The built-in sound system has a power of 20 watts. And support for Dolby Atmos allows you to connect external speakers with built-in internal decoding.

The Hisense U8GQ TV lineup boasts high build quality. The company used black plastic with metal elements. The Hisense 55U8GQ TV is mounted on a center v-shaped stand, which provides solid support and does not require a very wide horizontal surface for installation.

At the rear of the panel there is a place for cable management. This ensures that the various connections are not visible when looking at the TV from the front. The TV is slightly thicker than the slim OLED and side-lit LCD TVs. But this is a consequence of the FALD application . Since we don’t usually look at TVs from the side, this thickness doesn’t affect anything other than wall mounting.

At the bottom of the front panel is a thin bezel with the company logo. The overall gray metallic finish looks modern and gives the impression that the Haysen 55U8GQ is an expensive model. 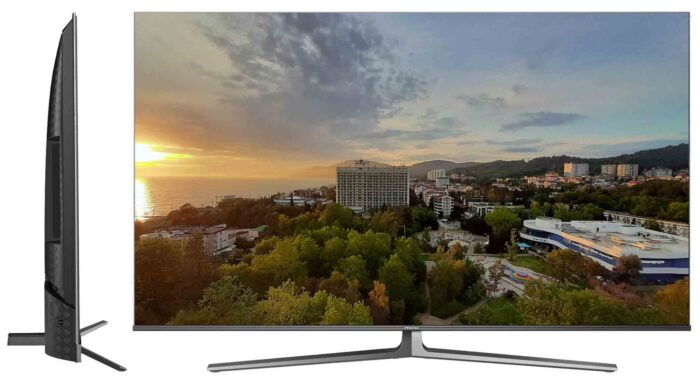 The connections are located on the back of the U8GQ TV and are located on the side and rear. In the side there is a CI slot, a dual RF tuner, two USB 2.0 + USB 3.0 ports and three HDMI 2.0b inputs . At the back is another HDMI port, optical digital output, and an Ethernet port. There is also built-in Bluetooth and dual-band Wi-Fi.

The included remote is a slim silver body with black control keys and white direct access keys for streaming services. The layout is logical and intuitive, with the main buttons centered. The remote fits neatly in your hand and is easy to use. The tactile feel is good and the build quality is in line with the price point. 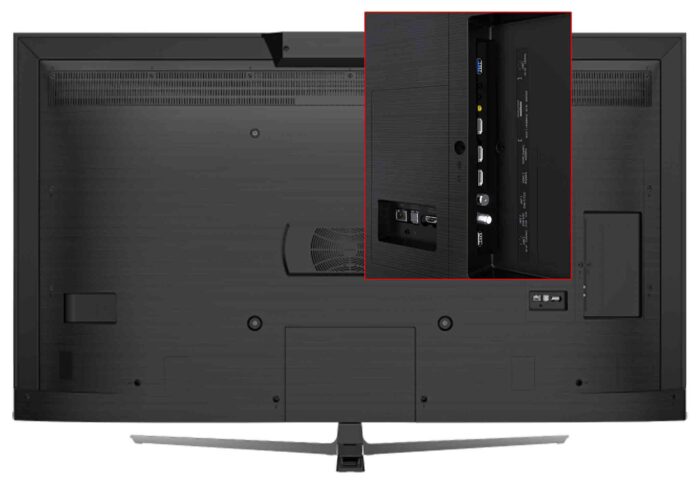 The Hisense 55U8GQ is a 55-inch direct-backlit LCD TV that uses 90-zone full local dimming (FALD). Panel uniformity is good, but with a slightly darker center in certain test images. At brighter levels, there is some subtle dirty screen effect.

With content using a single predominant color, you can also see the dirty screen effect, which is a side effect of the backlight technology used in the U8GQ. Most of these problems are only visible on test frames though. For the vast majority, these problems are not too obvious.

Intense bloom can sometimes be observed when bright objects are set against a dark background. The color processing algorithm used in the U8GQ can be aggressive. In some cases, with certain HDR playback, the backlight is turned off completely in scenes that should be very dark.

It has been observed several times that when using content in Dolby Vision, changing the scene from dark to bright or vice versa causes a noticeable pumping of brightness while the dimming automatically tries to find the correct level. It depends on the current scene. Thus, it can be concluded that Hisense with dimming algorithm takes longer to process. Viewing angles in the 55U8GQ are normal and in line with expectations from an IPS matrix. The motion handling is decent, with no noticeable jitter even at 24fps. Just turn off motion smoothness processing. There is also some movement following objects and other artifacts. When you turn on the “smooth motion” mode, you immediately get a soap opera effect from interpolation, and as you apply higher settings, artifacts become much noticeable.

There are custom settings for blur and shake. You will have to experiment with these in the menu to watch sports or other fast-moving video content. But for regular films and dramas this processing should be turned off.

The U8GQ is believed to be best suited for working in a room with diffused light or when using an external light behind the TV screen to improve visibility in a dim room. Blacks are good, but there is quite a bit of noise on black when viewed in the dark. Thus, TVs of this series are best used with ambient ambient light.

The Hisense 55U8GQ has excellent SDR viewing in a well-lit room right out of the box, with excellent dynamics, good depth of field, and correct image detail. The colors are decent, with very good skin tones and facial details. At the same time, the primary colors are well saturated with excellent tonalities and gradations.

DVB-T2 channel switching works well with balanced picture. SDR processing does an excellent job of scaling that does not result in any obvious degradation of the edges of the contours or the appearance of thin lines. By the way, no noise reduction was noticed, which is good. Although the image from the SD 576i could have been better.

HDR content is impressive in a well-lit room. The 55U8GQ has good dynamics with no visible black dilution issues. The tone mapping is pretty decent as Hisense can technically deliver 1000 nits of brightness without much difficulty.

Consoles with Hisense 55U8GQ feel great because of the 17ms input lag in SDR and HDR modes. The stated ports are partially compliant with the HDMI 2.1 standard as VRR and ALLM are mentioned in the brochures. In this series, “partial” support for 2.1.

The company’s own OS VIDAA U5.0 is very easy to use, the system is responsive to remote control commands. The user has all the major apps like Netflix, Rakuten, Prime Video, Bitbox and YouTube in 4K HDR. Disney + and Apple TV + services remain in question, but that shouldn’t be a big deal for most users.

Finally, the soundbar, which is indicated in the specifications. Namely: a sound system 6 x 10 W + 2 x 10 W + 2 x 20 W. This aroused undoubted interest, which led to a support call. There was a long pause at the other end. Then the consultant announced support for Dolby Atmos and began to talk about how sound is distributed in this mode …

A specific question was asked: “How many speakers are there in the TV”? And again, after a pause, the answer appeared – only two speakers of 10 watts each. Thus, the beautiful myth of the soundbar in Hisense U8GQ TVs has been dispelled. And multichannel sound is available only when using external speakers. In principle, there is nothing new from the support call.

In general, the sound quality is good for a simple 2.0 sound scheme , which is in line with conventional TVs in this market sector. Deep bass is lacking for quality reproduction, but the sound system delivers well-balanced, crisp vocals and dialogues.

If you’re looking for an LCD TV for cool movies, then the Hisense U8GQ isn’t the right model. You will probably need to search for a more expensive LCD model or consider the OLED option. This series is not for enthusiasts, there are better options, but for a large amount.

But if you’re looking for an everyday living room option that has good gaming performance, good design, and decent SDR and HDR viewing, then the 1000-nit Hisense U8GQ is the right choice. Peak HDR brightness is impressive, and great dynamics and rich colorful specs are an added bonus of the models.

Samsung QD-OLED TV: Next generation TVs to launch in 2022

Hisense A7GQ Review: Great performance out of the box