Of the 8 LG series in 2019, perhaps the only lineup we haven’t met yet is the LG SM8200 TVs. Considering that in 2019 the sixth series from LG is not expected in the 4K segment of the manufacturer, we can conclude that the 8th series of LG is a kind of “average” in the entire lineup of LG 2019 . In this LG 55SM8200PLA review, we will try to get acquainted with the features and characteristics of the LG SM82 series.

To consider this series, take, for example, a 55 diagonal TV. The LG 55SM8200 has a 139cm NanoCell sensor and includes the latest AI image optimization. The lineup consists of three diagonals LG 49SM8200, LG 55SM8200 and LG 65SM8200. Unlike its older counterparts from the eighth series, it uses a 60 Hz screen refresh rate and Edge-LED backlight regardless of size.

But the image processing is still done with the Alpha7 gen.2 processor. The Smart TV platform runs on webOS 4.5, there is support for “Smart Home” and voice control of the device. Note that the 8 series LG “begins” with TVs 86UM8070AUA and 86UM8070PUA, but this is not the European market.

The LG 55SM8200 TV, like the other two models in this series, has a thin, almost frameless, black plastic case. The bezel of the screen is made without metal. The crescent-shaped stand is made of brushed aluminum. The appearance is quite attractive for those who do not like the surplus of metallized surfaces.

For the option of mounting on the wall, the model provides a VESA mount of 300 × 300 mm, for a smaller diagonal in the LG 49SM8200PLA TV, the VESA size is reduced. When installed on a vertical surface, access to some I / O ports may be restricted. We have already mentioned this in our review of the LG SM8600 on our UltraHD.su website. The LG SM8200 series is equipped with the new AN-MR19 remote control with a built-in microphone for voice control. Equipment LG 55SM8200 on the level of TVs of solid “middle” premium class. The built-in wireless network makes it easy to integrate via WLAN into your home network and connect to the Internet via a router. All new LG TVs have been updated to webOS 4.5, and the SM8200 series is no exception.

The responsiveness of the operating system is good. Switching channels or selecting image sources is amazingly fast. It looks like the manufacturer has done a good job at the hardware and software level. Additional features include the presence of interactive HbbTV, many multimedia libraries, a built-in and fast web browser and a bunch of installed streaming services with support for 4K HDR streaming.

LG has been emphasizing the presence of smart home features and artificial intelligence in its models since last year. The SM8200 series is not deprived of advanced technologies in this direction. Like previous models, the 55SM8200 is fully compatible with Google Assistant and perfectly understands voice commands. For some markets, the platform “Amazon Alexa” is relevant, but its support, according to the assurances of the company representatives, will be supplemented a little later with the next software update “over the air”.

As we understand, considering 4K modern TVs, the name Smart TV is not enough for such a device, despite the abundance of Internet resources with video content. The main functions of receiving terrestrial television are carried out using a triple tuner with the ability to “chew” DVB-C, DVB-S or DVB-T2 sources. The LG SM8200 series TVs are all equipped with 60Hz Nano Cell matrices, sadly. Perhaps this is one of the main and main differences from the LG SM8600 and LG SM8500 series . The applied IPS panels allow displaying up to a billion colors, but with a color depth of 10 bits (8 bits + FRC). Image processing and scaling is done using the second generation Alpha7 processor.

Overall, however, the 55SM8200 delivers brilliant images when equipped with the AI ​​Picture function, automatically adjusting the brightness and contrast levels to the ambient light. The picture looks with an excellent color depth effect, despite the side illumination of the matrix. No blurring or clouding effects were noticed.

Of course, we can talk about the quality of the picture if we have natural Ultra HD content as input. Moreover, streaming services and Blu-ray players, including the latest game consoles, will amaze you with the displayed image on the screen of the LG 55SM8200.

As for the sound, it is possible to note an incomplete correspondence with the image quality. In the considered series of TVs LG SM8200, the sound system is made according to the scheme 2.0. 20W total output power with Dolby Atmos and Surround Sound. This is enough for standard content.

But when playing live programs, the low-frequency components are too small for a juicy sound. We understand that in such case dimensions is difficult to build low-frequency high-quality speakers, so the manufacturer offers a choice of single soundbar the LG , for example, the LG SK9Y the Dolby with the Atmos scheme 5.1.2. 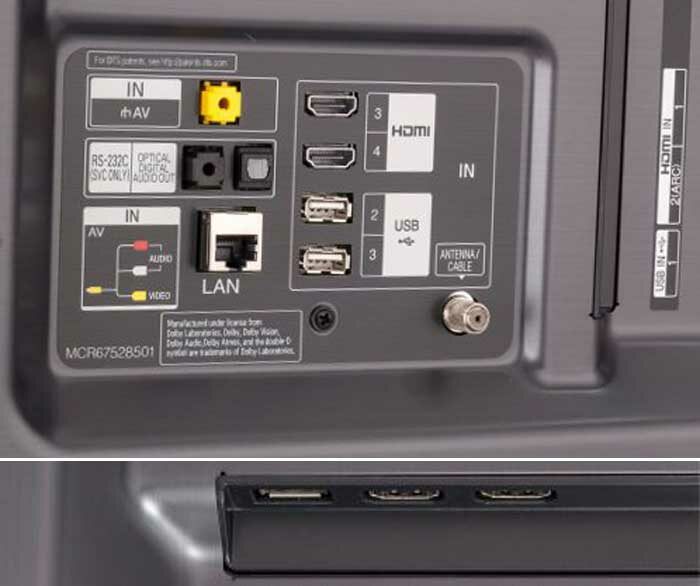 The LG SM8200 line does not differ from its older comrades in the presence of I / O ports. The user has access to a standard (according to the manufacturer) set of four HDMI 2.0 ports with ARC support and a pair of USB 2.0.

Sound can be output through the optical jack or through the 3.5mm headphone output. There is an additional AV composite input. The Internet or network can be connected via an RJ-45 or WLAN LAN socket. For mobile devices, a connection via Bluetooth 5.0 is available.

The logical conclusion of the LG SM8200 review will be a comparison with the LG SM8600 line. The main difference between the SM860 and the SM820 is, of course, the frame rate. In the older series, the frequency is 120 Hz versus 60 Hz in the considered line.

Hence, the technology for processing dynamics of the image, which at 60 Hz “works” only at the TM100. In addition to these obvious drawbacks, we can highlight the lack of support for Dolby Vision and 4-level noise reduction in the SM820. The sound system, despite the same output power, also has some differences – this is the direction of the sound “Down Ring” and “Wireless Sound Sync” in the SM860.

The entire series of LG SM8200 belongs to the premium segment, despite the frequency of the 60 Hz matrix and side illumination. Advanced features are embodied here, including a great operating system, smart home control and a good triple tuner.

The models in this line provide decent image quality, but the processing of action scenes with the TM100 can be accompanied by artifacts. The appearance of the TVs is attractive, but no frills. Among the TVs of the premium segment, quality and price are combined here in the right proportions.