LG C2: Can this Cutting-edge TV Outshine its predecessor? 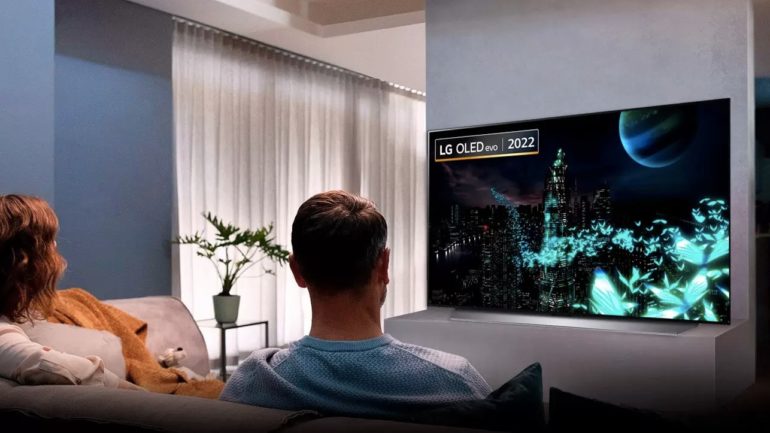 The LG OLED C2 was announced at CES in January 2022 as the successor to the C1 series. The new brainchild of the company boasts a brighter Evo OLED panel, which in principle should provide an even better picture. The LG C2 series will also feature the first 42-inch OLED TV.

The question you should ask yourself when choosing a TV is whether you want the latest, cutting-edge TV technology, or would you prefer to save up to a quarter of your budget. The answer may depend on how advanced the technology is and how much it affects performance. In the LG OLED55C2RLA 4K HDR TV review, we will look at the functional equipment of the new model and its differences from the LG C1 TV.

The appearance of the new LG OLED55C2 TV is defined by the same design as the C1, albeit slightly modernized. The frame is now even thinner – reduced from 10.2 mm to 6 mm. The C2 series has a pedestal stand. For the first time ever, the 42-inch model comes with a pair of narrow legs.

This is because the OLED42C2 is meant to be used as a gaming monitor and LG thinks the legs are better suited for a desktop setup. Please note that the stand used will not allow you to place the soundbar directly in front of the screen. I’ll have to think about a different location. 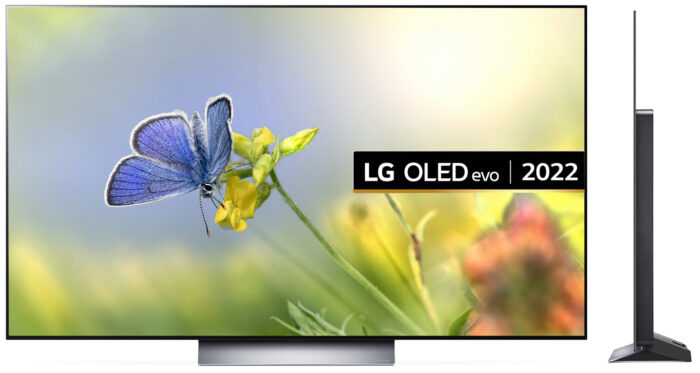 It’s nice to note that the LG OLEDC2 TV weighs one and a half times less than the LG C1 . The astonishing weight loss appears to be due to the use of composite fiber material in the new model’s hull construction. In any case, the OLED C2 is much easier to mount on the wall than its predecessor. Otherwise, no critical evolutionary changes in design have been noticed.

The main differentiating factor of the LG OLED 55 C2 is the type of display used. While the C1 was based on a standard OLED panel, the C2 boasts the brighter Evo OLED panel. It’s a technology that debuted in 2021 with the top-end LG G1 OLED TV, but LG claims it’s improved with panel stack improvements and a new processor.

In the meantime, it can be said that the 2021 LG C1 delivers a super picture that performs well against the competition from other OLED TV makers. The image is natural and convincing, which combines force with sophistication, pure whites and perfect blacks, fine details and sharply defined edges. Really nothing to complain about.

Speaking about the functionality of the LG OLED C2 2022 TV, first of all, we note that the O22 chipset is now at the heart of the hardware stuffing. It is based on the 5th generation α9 intelligent processor. The new chip provides smarter AI scaling, advanced object background processing and mixing, increasing the number of virtual channels from 5.1.2 to 7.1.2.

LG C2 uses webOS 22 instead of webOS 6.0 . This is not a radically changed operating system. The new software offers only a few enhancements, including improved personalization, NFC Magic Tap for mirroring mobile devices to an LG TV screen. In addition, the interface has become faster and more responsive.

Based on the specs, the LG C2 series could be even better suited for gaming than last year’s. Improvements include a new Darkroom mode to reduce eye fatigue when playing in low light conditions. HDMI 2.1 ports with a bandwidth of 48Gbps allow you to play 4K 120Hz content. 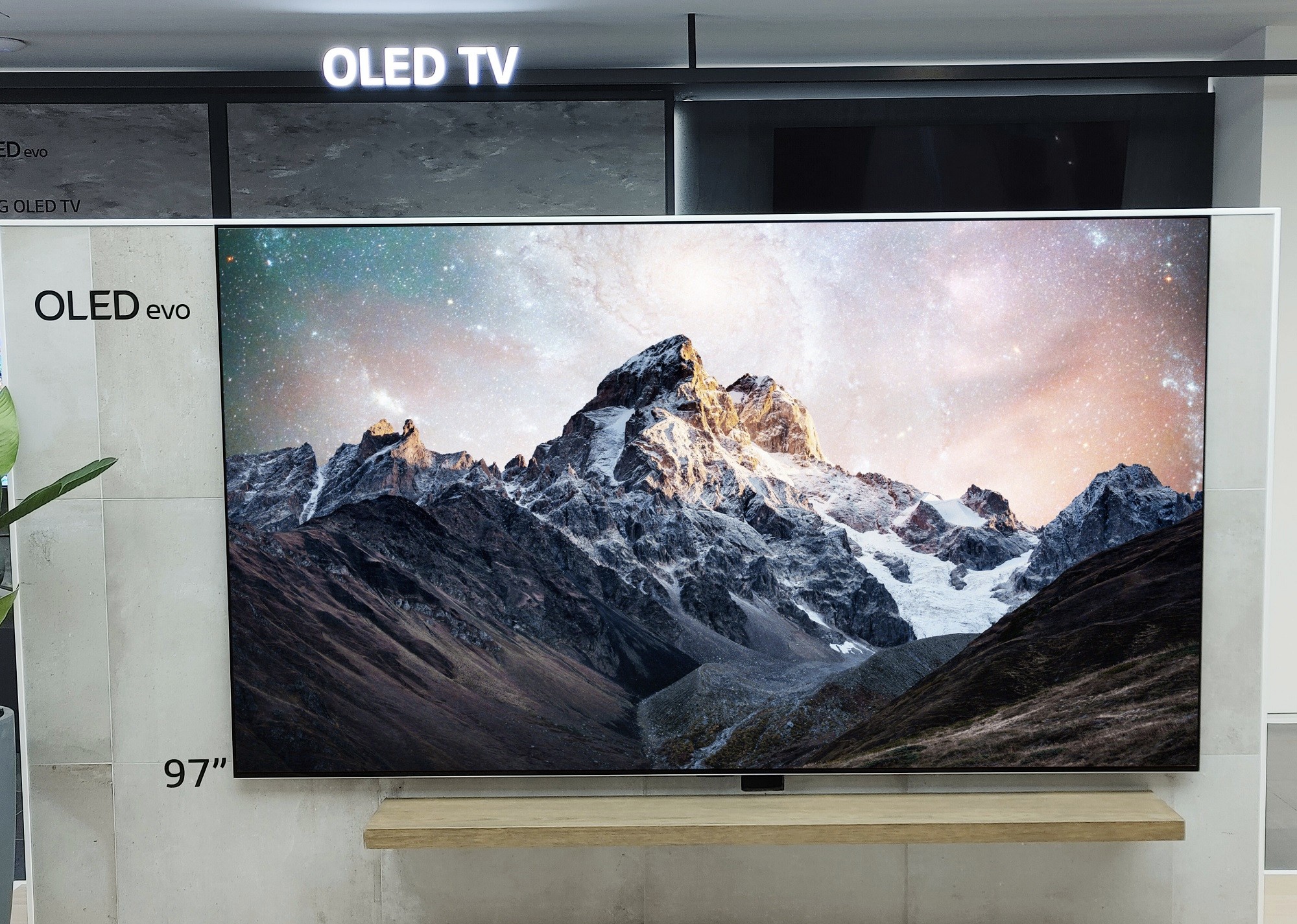 The TV uses the same Game Optimizer, but with some improvements. For example, Sports has been added to game genres. Although for the best image quality, the Standard mode is still preferable. To improve the clarity of the display of moving objects, a black frame insertion (BFI) with a frequency of 120 Hz is used. Added support for 21:9 and 32:9 games.

A more useful feature is Multi View. It can be called directly from the game panel in the Home Dashboard. With this option, you can select the picture-in-picture mode by connecting a smartphone, camera or TV channel as an additional image source. Note that the C2 TV supports NVIDIA G-Sync , AMD FreeSync Premium and VRR. The response time is 1ms.

The aforementioned AI Sound Pro LG C2 virtual mixing technology is capable of creating 7.1.2 virtual audio channels, up from last year’s C1’s 5.1.2. Otherwise, the audio system has not undergone any changes – it is still a 2.2-channel configuration with two 10 W speakers and a 20-watt low-frequency radiator. 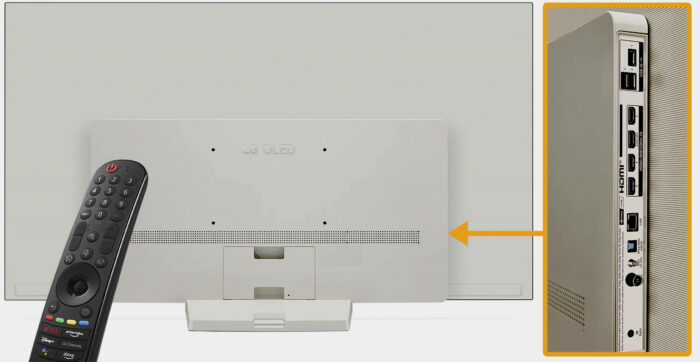 The sound is open and spacious enough for a thin TV, and can give movies and TV shows a more cinematic feel, especially when Dolby Atmos is enabled. Ultimately, no matter which TV you choose, we suggest adding a separate Dolby Atmos soundbar or surround sound system if you want an immersive sound experience.

In terms of the switching interface, there are no changes in the LG 55OLEDC2 either. Note that in diagonals of 55, 65 and 77 inches, all connectors are located on the side. It is very convenient. In other models, part of the connectors looks back. The C2 has 4 HDMI 2.1 4K 120 connectors. There is support for eARC Audio Return Channel . There is a LAN port, digital audio output, 2 antenna jacks and three USB connectors. The CI slot is located on the top. Wireless is Wi-Fi 802.11ac and Bluetooth v5.0.

If image quality is your priority, then the LG OLED C2 could outshine its predecessor with a more powerful processor and a brighter OLED EVO display. But there’s also a chance the new model’s stellar price-performance ratio will be downgraded. What’s more, C1 prices are dropping rapidly as new series are released. So the final verdict can be drawn up when all LG C2 models are in the public domain.