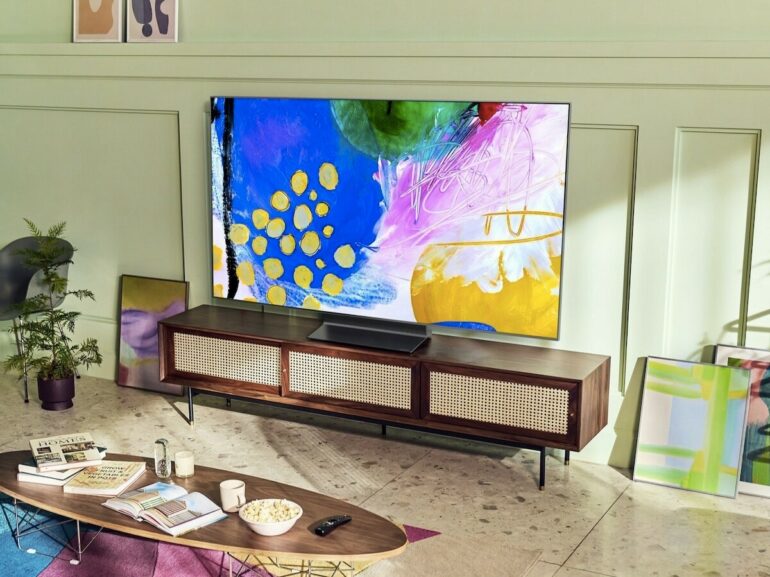 Every year with the release of new premium OLED TVs, we expect to see something new. The new LG G2 series of TVs brings original and innovative ideas and technologies to life. This mainly concerns the image quality of OLED, which the manufacturer emphasizes in its new development. Image processing and panel design in the G-Series Gallery TV series take the first place.

Let’s take a look at the new flagship model in the LG OLED65G2RLA OLED 4K TV review, which boasts a number of improvements over the cheaper LG C2 OLED variant. Now we can definitely say that the LG G2 is a real competitor to new QD-OLED TVs such as the Sony A95K or the Samsung S95B line .

As we understand, LG will not give up the fight for the title of excellent image quality in OLED models, focusing on the release of the new LG G2. Enhanced “Brightness Booster Max” technology and improved design, which is a win-win, puts the G-Series Gallery in the premium class.

In general, the G series from LG has always been one of the most attractive models from this manufacturer. But since 2022, this series is undergoing changes in terms of a thinner and lighter body. LG’s G2 now uses a new composite fiber to make the back of the LG OLED65G2 TV.

According to LG representatives, this approach greatly facilitates the TV, which is important for wall-mounted models. Here are some figures from official press releases. For example, the 65-inch G2 is 47% lighter than its predecessor LG G1 .

The other significant change in the LG G2 is the screen stand, which in 2022 is a more practical and elegant central support.

All four HDMI inputs on the LG G2 provide 4K@120Hz resolution with a full bandwidth of 48Gbps. This gives the G2 an edge over Sony’s debut QD-OLED, which only has two 4K@120Hz HDMI inputs.

Another new feature worth noting is Dolby Vision IQ with “Precision Detail”. LG is the only brand to announce TVs using this advanced image processing. These models use an imaging technology developed by Dolby called “Dolby Vision Precision Rendering”.

This innovation is made possible by the processing power of the G2 Alpha 9 Gen 5 processor. The company assures that the LG G2 series should have more contrast and higher detail with existing Dolby Vision content.

Note that Samsung is ignoring Dolby Vision and Sony doesn’t offer Dolby Vision IQ in its new A95K QD-OLED, let alone Dolby Vision IQ with Precision Detail. This fact can be important when it comes to any Dolby Vision picture quality, especially when competing with HDR standards.

Lots of visual improvements. One of them is an improvement to object AI that tries to make foreground and background elements even sharper on par with improved HDR mode tone mapping. Of course, the comparison of image quality is worth making with last year’s model or with the 2022 LG C2 , where the C2 also belongs to the class of Evo panels.

In short, the picture in LG’s new G2 is brilliant. From a panel standpoint, Evo is used here, paired with a new brightening technology. The result is a significant rise relative to the average image level.

The “Brightness Booster” function is based on a special algorithm. Let’s touch on this a little. The Alpha 9 Gen 5 processor is smart enough to run algorithms that understand where an image is brighter and darker. Therefore, the chip can distribute tasks correctly.

On an image that is mostly dark and uses little power, the processor slightly boosts the brighter area of ​​the image. With regard to the Evo panel, the processing algorithm produces a noticeably improved picture with an overall brightness. 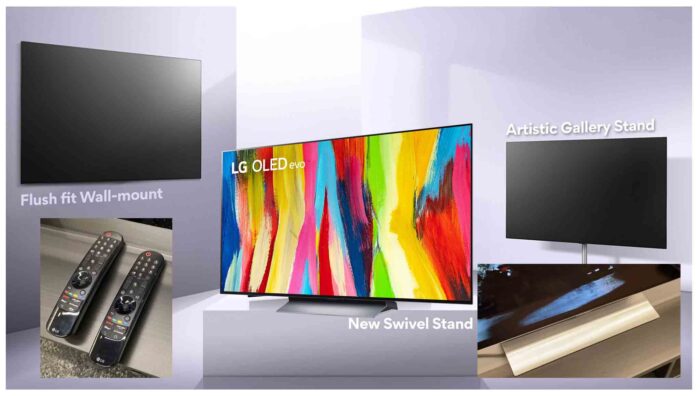 Another thing to note: only two series in LG’s 2022 lineup use brightness boost. These are C2 and G2. LG confirms that the implementation of “Brightest Booster” in the LG C2 produces approximately 20% brighter whites compared to OLED panels in the LG A1 or LG B1 .

In order not to create some confusion in the differences and implementations between the C2 and G2 series, let’s try to figure it out. The LG G2 uses the same smart algorithm as the C2, but LG refers to the technology in the G2 as “Brightness Booster Max”. This is due to the fact that the G2 has a built-in heatsink on a chip, thanks to which it is possible to get a gain of up to 30%, and this is additional brightness. Thus, this figure is 10% more than the LG C2.

Comparing the LG G2 and the cheaper LG C2 series, you can see the benefits of the advanced hardware design of the G2. The screen clearly presents brighter and more dynamic whites. The overall picture is brighter and clearer than the C2.

However, with all the above pluses, there are some comments. For example, if a movie is played in Filmmaker mode or one of the Cinema presets, these technical advantages may become less apparent. And do not forget about the type of content itself. This is, so to speak, a marketing trick and should not be discounted for models with a class below.

Summing up this point, we can say – yes, LG G2 is brighter than LG C2. The new series can compete with QD-OLED at this cost. But in the end, the “final” image is influenced by the view mode and depends on the original content. 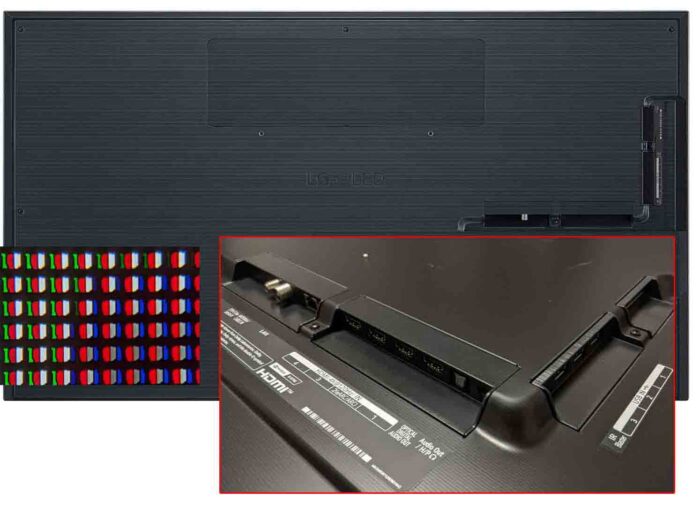 Since the considered LG OLED65G2 model should appear on store shelves in early April 2022, there is no final opinion on the sound system. Given the design limitations, perhaps one shouldn’t expect too much from onboard audio.

However, the new Alpha 9 Gen 5 chip isn’t just for image processing. It also aims to improve the sound capabilities of the OLED65G2 TV with “LG AI Sound Pro” processing. Any audio post-processing can easily be routed to compatible LG soundbars such as the LG S95QR.

This is an additional paid option. It allows you to wirelessly transmit Dolby Atmos audio from your TV to your soundbar. And it can be attractive if you intend to place the LG G2 TV on the wall.

The LG G2 is an impressive 4K TV, both in terms of looks and performance. The introduction of “Brightness Booster Max” technology gives a brightness advantage over other LG models, including the Evo C2 counterpart. The reviewed series, of course, is a competitor to the new QD-OLED models from Sony and Samsung.

However, it is worth recalling that the model is designed for wall mounting and the stand is an additional option. This should not be forgotten, as well as the need for a separate soundbar. But with Dolby Vision support for home theater fans and plenty of next-gen gaming features, it’s all easy to do with HDMI with ALLM and VRR.