LG OLED C1 Review: The best choice for next generation movies and games OLED technology has already proven relevant in all scenarios – a TV with such a panel fits organically into the surrounding space, suitable for watching movies daily, streaming and running games. The benefits of OLED are ready to demonstrate the new series of LG OLED C1 TVs, which we will discuss in detail in the review.

Darker than black. What are the benefits of OLED

The 2021 line continues the tradition with the previous series and contains five models at the same time with screen sizes from 48 inches to an impressive 87 inches. Of course, the most popular 55- and 65-inch diagonals, which easily stand on the pedestals, did not go without further effort from the owner.

I immediately want to test the news in movies – where else can you control the panel with millions of self-illuminating pixels and the clearest color reproduction? This is where it is easy to judge the differences from classic LED matrices and personally experience what real black means. Showrunners in the popular series made a battlefield in the dark, where you can not see a single zgi? LG OLED C1 does not give up in difficult conditions, which means that instead of blurred silhouettes and unwanted special effects can see a massive carnage in every detail . The director decided to release the film in a not very impressive 4: 3 format? An OLED panel saves viewers from unnecessary noise and greyness displayed in dark areas.

But the benefits are not just hidden in the dark – it’s not for nothing that the British agency Intertek, after testing, revealed that LG screens have one hundred percent color accuracy.This means that the landscape of Iceland and Mexico in documentaries, views of distant planets and river plains, on which hobbits tread, will look as vivid as possible.

What should I see tonight? There will be fewer such issues thanks to the updated webOS 6.0 operating system. The developers have relied on the availability of content so that the owner of the LG OLED C1 does not have to maneuver between applications for hours and browse through extensive lists of annoyances.

To do this, the new operating system uses a tiled design – the main screen already contains the most popular applications, individual titles and other useful information, including time and weather data. In this case, the programs are sorted by frequency of use, and if desired, they can be edited manually.

Another innovation is the Next Choice feature, which can be automatically customized to the user’s taste and provide recommendations based on web history. And even this simple solution saves a lot of time, so you can watch content continuously – and what’s interesting to you!

The proprietary Magic Remote has also undergone changes, which has long made LG TV owners abandon the endless snapping of keys in search of desired features. The built-in gyroscope for easy cursor movement around the screen and support for voice assistants is still there.

But with the updated design, Magic Remote got quick access to a number of services, as well as an NFC module for fast pairing with smartphones. Sometimes neither HDR support nor 4K resolution can affect the viewing experience. If the image is rippled, blurred and filled with incomprehensible artifacts, “toys are not encouraging.” Fortunately, LG engineers have found a solution to the problem – the α9 Gen4 4K processor enters the arena and can flex its muscles.

The news was not spared by fashion trends – deep learning algorithms. Thanks to their efforts, the “brain” of the LG OLED C1 improves the image and increases the resolution and analyzes the video frame by frame. A separate technology is provided for high-quality audio connoisseurs – the processor can automatically smooth out its level depending on the content and output 5.1-channel virtual surround sound even without headphones. At present, it will be understood that for complete immersion, it is not necessary to provide the entire room with speakers, as the built-in TV speakers are more than sufficient. Dolby Atmos support will also be useful for the device to be able to convey the sound of each object’s movement.

And the TV can also understand the lighting conditions by automatically adjusting HDR thanks to Dolby Vision IQ technology. Intelligent optimization works simply – sensors transmit information about the room, after which the optimal level of clarity and brightness is selected.

And do not worry about eye strain, not even after a day of watching movies. The creators made sure that the TV emits as little blue as possible.

Not a minute of peace. How the new TV shows up in games

2020 was a landmark year for gamers – nextgen appeared in the form of Xbox Series X | S and PlayStation 5 consoles, which directly raised the bar for expectations from the upcoming hits. And here the LG OLED C1 line shows itself from the best side – even a 48-inch diagonal is more than enough to feel the difference.

Shooter fans immediately understand the importance of the 120Hz refresh rate, which has finally begun to be added to console hits, including the latest version of Call of Duty and Rainbow Six: Siege, Fortnite and Destiny 2. At 120 FPS, the picture becomes as smooth as possible, and filling fragments in this mode is much more convenient, even if you have to sacrifice permission.

Owners of powerful computers, with which the C1 turns into a huge monitor with support for 4K content, also got some buns. AMD FreeSync and NVIDIA G-SYNC adaptive synchronization technologies provide tear-free image output. Even if the frame rate slows down, the TV neutralizes the difference and the player does not have to look at unpleasant artifacts. A low response rate of 1 ms is useful for online jet action and racing.

Heroes and vehicles react as quickly as possible to the player’s actions. And support for HGIG recommendations made it possible to achieve the sharpest HDR effect. 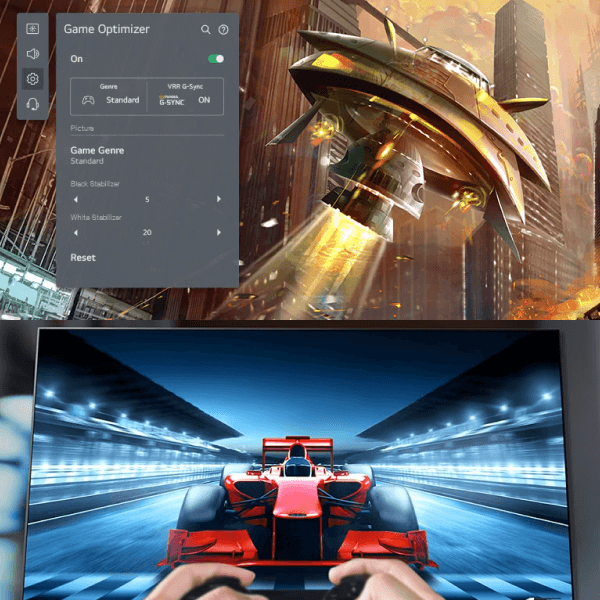 LG OLED C1 eliminates another headache associated with image intensifiers. Further processing not only requires resources but also wastes valuable milliseconds, where you can miss the advantage in battle. ALLM (Auto Low Latency Mode) automatically reduces latency and saves many nerves in professionals. And eARC is tailored for players who want to hear all the details, detect enemy movements from a distance and pay attention to every snap of floorboards. This protocol supports active high bandwidth so that the TV owner can enjoy surround sound at the output.

In addition, the manufacturers have placed four HDMI 2.1 ports on the case at once, three of which are on the side – this option is extremely convenient if the TV hangs on the wall and it is difficult to pull wires for it. What does this standard provide? Version 2.1 has many benefits that will delight regular players. For example, VRR is an analog of the above-mentioned synchronization techniques.

GUIDE: How to choose an electric scooter in 2021?

Garmin Venu 2S: Smartwatch with a 1.3-inch screen and a protected case