The LG R9 OLED roll-to-roll TV has won a lot of press coverage after CES 2019. But considering that this model will be very expensive, and its release is only being prepared for the second half of the year, then OLED models are of more interest to the common consumer. Moreover, LG is making a lot of efforts to be at the top of its glory, competing with the world leaders in this area of ​​entertainment systems.

Alongside the first 8K TV in the LG Z9 series, there will be new items for 2019, including the LG W9, LG E9, LG B9 and LG C9. Let’s take a look at the LG OLED65C9PLA review and try to figure out what new LG engineers have provided us. Should you pay attention to new series or prefer last year’s versions when buying a new LG TV?

As a reminder, last year’s LG C8 lineup won all sorts of awards from both professionals and consumers alike. A logical continuation is the LG C9 TV series, which was presented at the beginning of the year. Last year’s models were available in 77, 65 and 55 inches. In 2019, the series consists of models with the same diagonals. Therefore, in our opinion, the 65-inch OLED65C9 model will become the absolute leader among OLEDs this year.

The general view of the C9P 4K OLED series TVs looks the same as the predecessor C8. The only differences affected the panel stand. This applies to TVs with a diagonal of 55 and 65 inches. For the OLED77C9 model, the manufacturer did not change anything at all in this regard. The original TV stand provides stability and looks great.

The stand in the LG OLED55C9 and OLED65C9 has a narrow, angular “blade-slim” design that has been in use since 2017. The 77-inch C9P version of the TV has an old-fashioned stand, but this is due to the weight of the panel. This is how LG representatives explained. The bezel around the screen is in black. She’s pretty thin.

Screen thickness, repeating last year’s version, is minimal at the top of the TV. The lower part of the screen has a decorative strip in the color of the stand. The neutral metallic gray color emphasizes the elegance of the design. The lower part of the TV on the back side has a size commensurate with the design of the interface part, where external devices are connected. LG has taken a two-pronged approach to improving the performance of its 2019 OLED TVs this year, including the OLED65C9. The basis is the second generation “Alpha 9” processor. The first new piece of hardware is represented by the new second generation Alpha-9 chip. In fact, LG assigns the processor the main control function of “artificial intelligence”.

The TV’s processor optimizes the picture quality by evaluating with a content look-up table and comparing it to the input signal. The α9 then automatically adjusts the image. By the way, this approach is similar to similar manipulations of some competing manufacturers, for example, Sony.

Let’s define what is the difference between last year’s LG C8 and the new LG C9 series. So, the processor “a9 Gen 2 Intelligent” is applied for improved video processing in terms of HDR tonal images and fast performance of LG webOS. With ThinQ A1, LG has made voice control of Google Home and Amazon Echo a reality.

The resulting “material”, together with an improved ambient light sensor built into the panel, is additionally processed. The system adjusts the tone mapping curve of the picture depending on the lighting conditions.

This works on two levels automatically depending on the content being displayed. With SDR content, the overall brightness of the panel is adjusted, while with HDR content, more detailed adjustments are made – the image is even better.

Along with AI images, AI sound is an inseparable part. Thanks to the AI ​​Sound feature, the 2019 OLED models can take in standard stereo signal and mix it to a virtual 5.1 sound circuit. In addition, the LG C9P models recognize the sound environment and acoustics of the room and change the sound accordingly.

According to the manufacturer, when comparing audio in LG 2018 OLED TVs, the “AI Audio” feature calibrates the acoustics to a higher level. Overall, similar to 2018, the OLED65C9 supports Dolby Atmos.

WebOS is still the main OS of OLED65C9. In the new series, LG webOS 4.5 has only added the so-called “Home Dashboard”. This is part of the OSD menu where you can see and control all connected devices, including various sources connected via HDMI, Bluetooth, including any smart home devices.

The app launcher that sits along the bottom of the C9’s 65-inch screen remains largely unchanged. But when compared to last year’s 65C8, there are cosmetic changes. The bookmarks that were previously displayed on the left side of the screen have been removed, and the main icons are slightly shorter in the 2019 version.

LG has added some additional features to the launcher. You can now access content through various applications without opening them. For example, when you hover your mouse over a Netflix tab, you will receive new and recommended content based on your viewing preferences. In theory, this should help you access content faster and more efficiently, and search queries will remain in the bowels of your “big brother” for a long time.

The OLED65C9 comes up with some interesting new features when tweaking it. Smart Editing automatically populates the launcher over time with the most used apps. This allows you to quickly navigate through all your favorite online content providers.

In addition, the “Add YouTube channel” function has become available. If you are subscribed to a channel, just add it to the menu. Favorite channels will be located on the launch bar, viewing starts instantly and with minimal pressing of the remote control buttons. 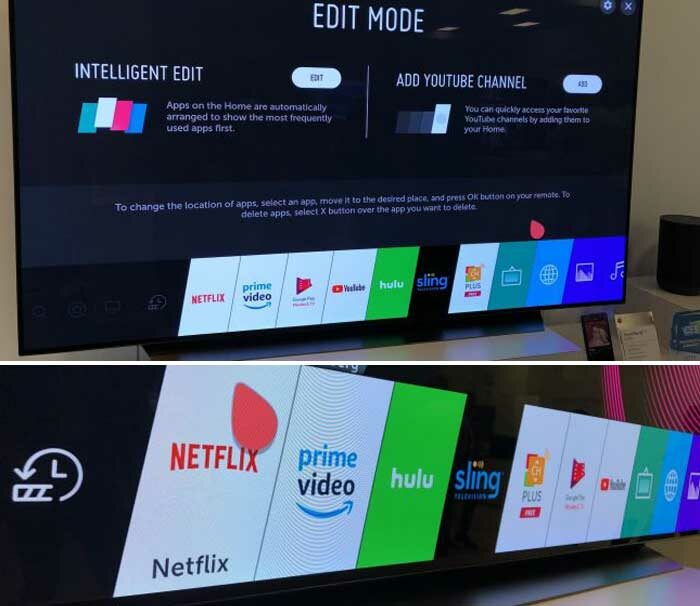 LG’s ThinQ AI remote extends the intelligence of the OLED65C9. By pressing the microphone button on the Magic C9 remote control, you can immediately issue a command with your voice. ThinkQ AI on the TV will automatically decide whether your commands can be executed or should be redirected to Google Assistant. If you intend to use the virtual assistant Alexa for some regions, then the remote has a dedicated “Alexa” button.

Here you need to insert a remark from the manufacturer – LG promises more memorization of conversations and interactions with its 2019 models. This will allow ThinQ AI to remember the previous questions and give the user more flexibility in “fulfilling a wish” and natural responses.

The OLED65C9 TV has Apple AirPlay 2 support , but unlike the 2019 Samsung TVs, it doesn’t have a built-in iTunes store.

To demonstrate the possibilities, “The Great Wall” was provided in 4K HDR format. And although there is no exciting content in this film, and we mean flashy plots in the image, nothing but positive can be noted. Here are the deep blacks inherent in OLED TVs from LG, a large number of distinguishable small details (especially noticeable in large-scale combat battles).

The borders (contours) turned out to be excellent, as did the action scenes. The first impression is that everything suits me. Bright flashes on the TV screen have a good level of brightness. The viewing angles of the screen are not inferior to last year’s OLED models. Without loss of quality, you can shift to different sides from the center of the screen – the picture is perfect. The display mode menu has several items including 3D LUT.

Compared to last year’s model, the resolution when playing back action scenes with Black Frame Insertion is even better. A separate plus for LG for adding this feature to the custom menu. The new embedded images in the Fine Art Gallery are a great feature when you are not watching TV content. The “SpectraCal Auto” function is a 36000-point image calibration for the best picture presentation.

The exhibition variant of LG C9, due to its location, does not give an opportunity to fully experience the advantage or superiority of the sound system. Only Amazon Audible streaming was available for verification, so it cannot be argued that the audio content of a connected Blu-ray drive will sound poor quality.

With such a soundtrack and external environment, everything was perfectly audible. The voices had a certain weight. The explosive scenes hit the ear membranes, but it is difficult to fully assess now. Dolby Atmos coupled with 2 x 10 W + 2 x 10 W creates a pleasant sound environment with “ambient noise”. Apparently, in a closed room (in a separate room) the sound of the model will be good and no worse than last year’s OLED65C8PLA. 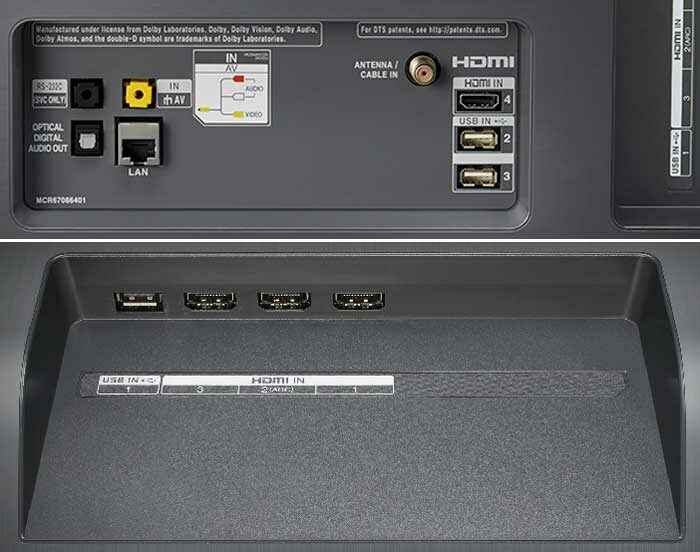 OLED65C9 4K HDR TV allows the user to connect four different sources to HDMI 2.1 interfaces. HDMI 2.1 is now included in all LG OLED models from 2019. This is the key to supporting a high frame rate (HFR) of 120 fps. All of these sockets are equipped with eARC. The rest of the interfaces are the same as last year’s LG C8.

Judging by the new LG C9 series, it looks like the manufacturer has improved the picture quality in the new models. The impression of the TVs at the exhibition stands is definitely good.

Now there is a high probability – LG will with dignity withstand the championship for the first place. But the big question remains, how much will Sony, Panasonic and Samsung compete? All details will be revealed in the reviews in the coming months.