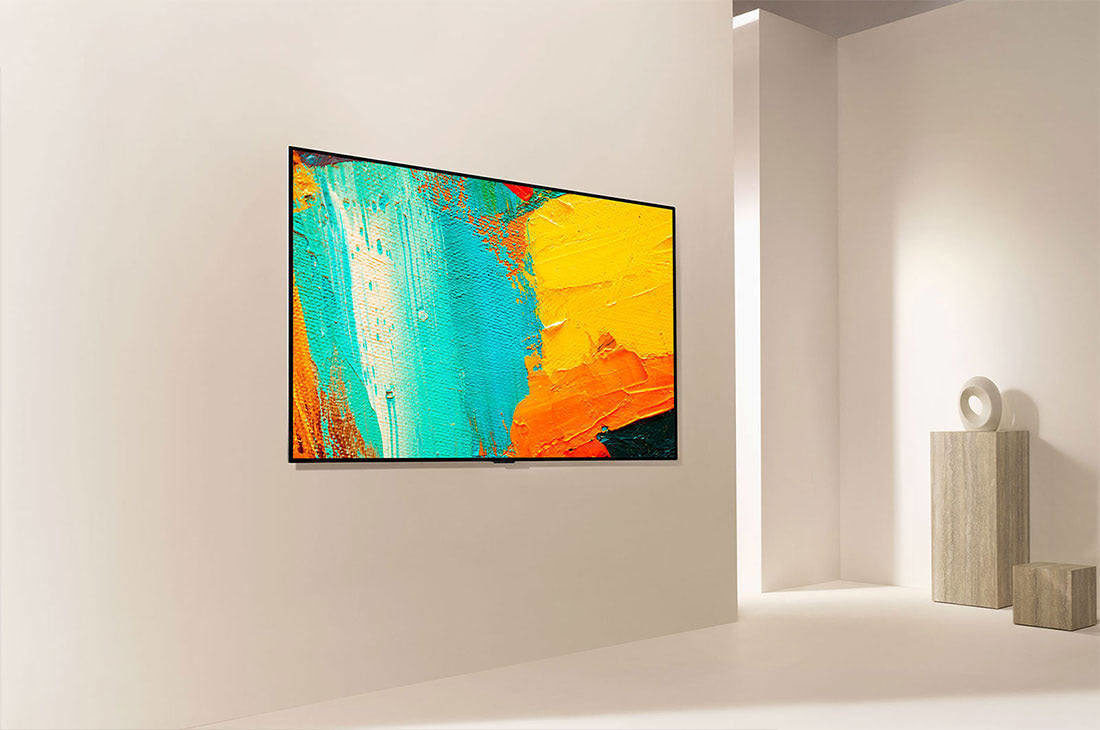 We haven’t talked about LG’s 10th generation 4K OLED TVs yet, so let’s get started with more details. First of all, in expensive models, which include the GX series, new matrices are installed with slightly improved spectrum characteristics – in particular, with improved display of green. Also, they are produced in Korea, not China. The matrix driver is naturally 10-bit.

The 10th generation models have the new Alpha 9-3 video processor, which is about 15% more powerful than the 2-in-index processor used in the 2019 models. In combination with the new software, Alpha 9-3 renders the image noticeably better, which we will discuss in detail below.

Finally, for 2020 models with the index X, one of the HDMI inputs is version 2.1 – that is, it can support video up to 120 Hz, including 10-bit 4K, as well as all the latest gaming features like Nvidia G-Sync AMD FreeSync , ALLM and VRR.

In this case, the output delay is only 5ms. That is, it is also one of the best TVs for games of all currently released. It’s a shame that there was no way to race it with a Sony PS5 or Xbox X to see what the “next generation video” looks like.

Unfortunately, it was difficult to appreciate the sound: the dimensions of the room where I tested this TV were incomparable with any room in a residential building, and the corresponding equipment was not at hand.

It’s a pity, because it is equipped with a stereo system with six speakers with individual amplification, special sound guides and a processor working on the principle of advanced soundbars, which together make the soundtrack of films sound three-dimensional, while none of the above is directed directly at the viewer system elements. And it also supports Dolby Atmos decoding!

But that’s not all – in addition to Bluetooth, the TV supports the WiSa wireless multichannel sound transmission protocol, which an increasing number of speakers are equipped with today. That is, such a TV does not even need a receiver to organize a full-fledged 5.1 and 7.1-channel system – this has not yet been seen in mass models.

The only thing that we managed to find out in terms of sound is that starting from this year, LG models stopped supporting DTS tracks. Streaming video services do not use them, but they are very common in downloads. So there is only one way out for torrent lovers – to buy an external stationary player.

But from that moment a new version 03.11.30 appeared – and several interesting functions were added to the system. In particular, the image settings have improved: for a simple balance adjustment, there are now more presets (“Warm3” has appeared), and for a complex one, the adjustment algorithm for two and ten points has slightly changed. That being said, CalMAN’s auto-calibration feature has certainly not gone away.

The firmware update definitely affected the final video quality as well. It makes no sense to list the technologies responsible for this – in general, they remain the same. But even without a head-on comparison, it was clear that “artificial intelligence” has become clearly smarter and more discriminating in the application of various treatments.

And you can see this not on any beautiful and standardly filmed demos, but on not very high-quality content that we all watch most of the time. For example, the TV has become more accurate in dealing with noise, leaving alone the graininess, which directors clearly deliberately introduce in some moments.

Smarter approach to smoothing smooth color transitions without turning films into a puppet theater. And he began to improve his movements, making fewer mistakes in dynamic moments.

Separately, I would like to say about the general image processing, when all the improvements in terms of contrast, colors, brightness, detail and gradation are applied simultaneously and in different proportions depending on the frame, and therefore it makes no sense to analyze them separately.

The TV has Filmmaker Mode. All these improvement algorithms do not work in it, but the color gamut is maximum, the gamut corresponds to the recommended standards, and the color balance is almost perfectly even. So not only me, but everyone present noted that with it the picture looks more natural in places, and the colors are displayed better on films shot on film, but in general everything looks somehow not so impressive compared even with the basic “Standard” mode …

And this speaks not of the uselessness of the Filmmaker Mode – it is necessary for purists – but of the level of modern image processing methods, which are gradually becoming better than the old standards.

Depending on the picture mode, the TV shows very different measurement results – especially in terms of the brightness response, that is, the correct display of gradations. For example, in the standard mode, in which almost all the “enhancers” of “artificial intelligence” are active, the graph is very far from the “recommended” one and strikingly resembles one of the modes of an OLED TV from another manufacturer:

It looks like a “standard” schedule only when you activate Filmmaker Mode.

True, in this case, the approximated gamma value is not 2.2, but 2.4, which in practice has almost no effect on the display of gradations – they are all clearly distinguished, but in general the image becomes darker.

Color gamut is at its maximum in Cinema mode and roughly corresponds to the DCI-P3 standard. In Standard Mode, it is about 15% less.

The color balance in Filmmaker Mode is the most even, but even in it, with the color temperature adjustment value “Warm2” (set a priori), the menu shows the prevalence of the blue component.

The color temperature, respectively, is higher than the standard 6500K and practically over the entire range is 7400K.

An even more advanced OLED TV than its predecessors. Ideal for those who want to have a device at home with a neutral design without unnecessary details, but with an ultra-modern interior.