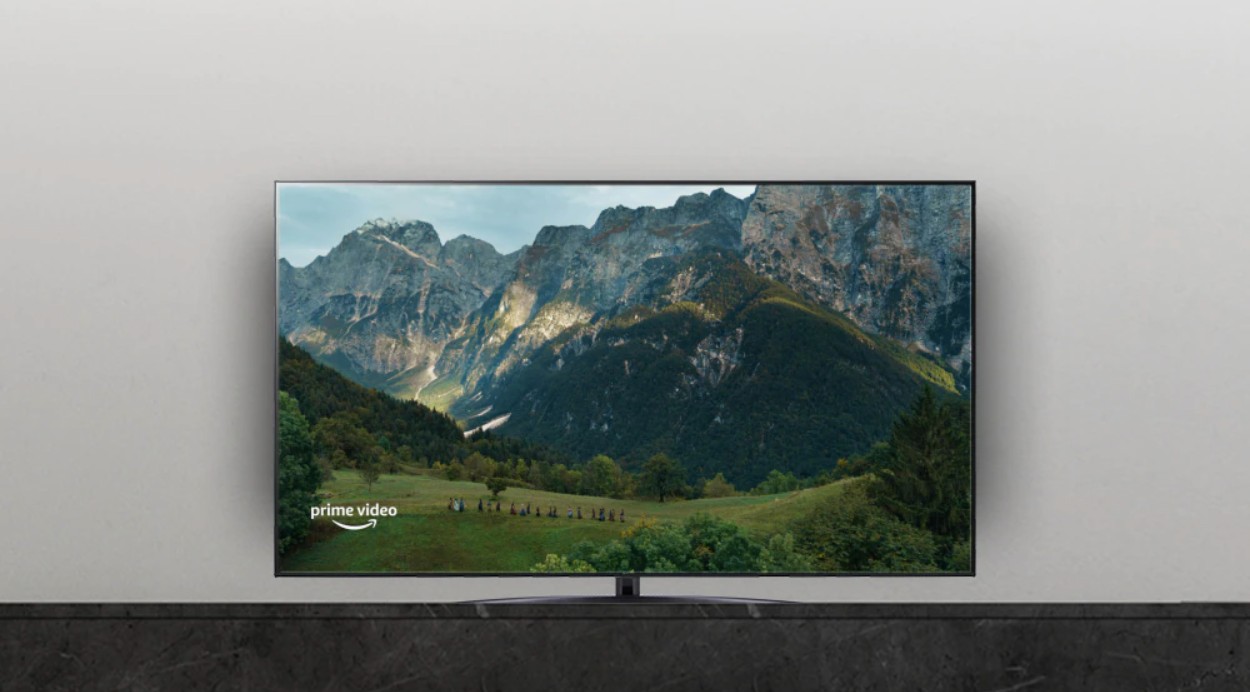 The LG UQ91 is one of LG’s most affordable 2022 lineups. Obviously, when it comes to a new TV, we all want to buy the latest and greatest. But there are a huge number of consumers who just need a TV for everyday use, but there is no budget for anything more.

LG’s UHD TV series sits at the bottom rungs of the performance ladder, just behind the NanoCell series, and offers basic features and functionality. As for the UQ9100 in particular, it is new to the UHD series in 2022, since it has no analogues in the past. In our LG UQ91009LD 4K HDR TV review, we’ll take a look at all the features of this affordable model.

Looking at the LG UQ91 TV, it’s hard to find significant differences from last year’s UP8100 TV . It seems that for many of its low-cost UHD series this year, LG is using the same shell as it did in 2021. One thing that really deserved attention last year was the reduction in its overall thickness, and it looks like the UQ9100 keeps the same thin design. .

Thus, the thickness of the UQ91 TV does not exceed 6.1 cm, which is quite good for such an inexpensive device. It will not protrude much when wall mounted. The 65‹ also comes with bezels thin enough for this price range to take up almost the entire front. 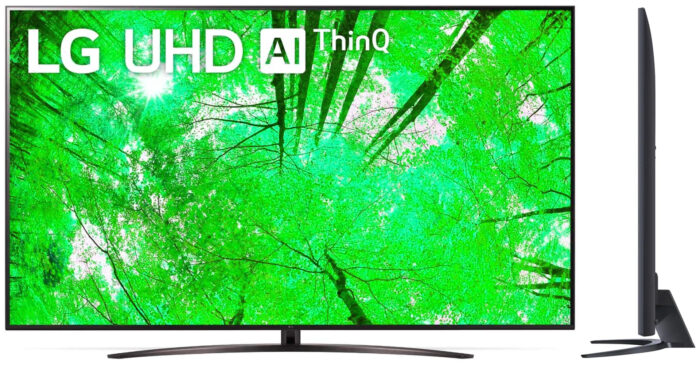 Unfortunately, the trend continues to ignore cable management or cabling. As for the stand, the LG UQ9100 series again copies the UP8100 directly. The TV uses a central moon-shaped stand. Perhaps the central support is not as stable as the legs, but it is less demanding on the TV stand. It should be noted here that there is a UQ9000 version of this TV , and instead of a stand, it is equipped with legs. 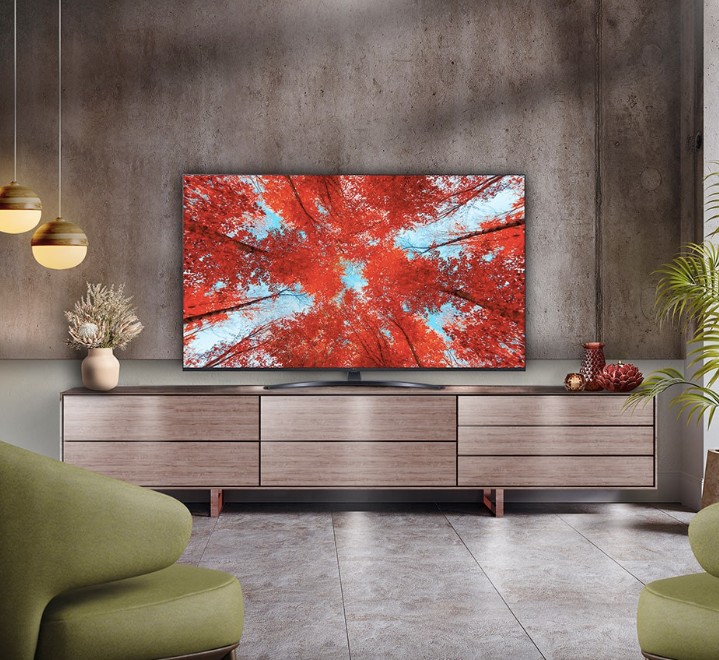 The a5 Gen 5 AI 4K processor used in LG 65UQ9100 TV is a new chip. Until 2022, LG had only a9 and a7 processors, and for more affordable TVs, it was just a quad-core variant without any further information about it. We do not yet know if there is any connection between it and the new intelligent processor.

Looking at the capabilities of the LG UQ9100 TV, we understand that now AI is used when it comes to zoom functions. In scaling tests, the UQ9100 performs really well – all kinds of content scaled up to 4K well, without any visible artifacts. Obviously, with low quality 480p content, don’t expect miracles, but what you’ll see is more than adequate.

Backlight control is less accurate, and the panel, unlike VA matrices , has a lower contrast ratio. This means that black will appear more gray than true black. In the test patterns, backlight blooming (spreading) is not as noticeable as for small bright objects against a dark background.

Unfortunately, LG 65UQ91009 TVs do not have the necessary peak brightness to achieve the desired effect in HDR. 250 nits in SDR mode and 320 nits in HDR are mediocre values. HDR is really not impressive here. These numbers show that the UQ9100 is not much different from last year’s UP8100, which is to be expected.

In terms of contrast, the 65UQ91009 TV comes with an IPS panel and as a result, the 7 contrast ratio isn’t exactly good. Be aware that 50-, 60-, and 70-inch screens use VA panels instead. And if this is true, then these diagonals will certainly be better in terms of black level and contrast ratio.

The UQ9100 uses an IPS panel and that usually means good performance in terms of viewing angles. The TV can’t reach the extreme angles of OLED technology, but IPS and similar panels perform much better than any VA panel. The LG UQ91 series lacks any of the viewing angle widening technologies found on some top-tier models, but for its class, it’s pretty good for use as a family TV.

For HDR, the 65UQ90009 only receives HDR10 and HLG. What’s available on the UQ9100 is the HDR10 Pro option, which adjusts the overall brightness level of each image to improve color and clarity. The color gamut measured in the test samples shows that the TV does not support Wide Color Gamut.

Prior to calibration, the LG 65UQ91009 has fairly good color accuracy, but the white balance needs to be adjusted. The color gradients are good, although some of the darker shades show streaks. There is also a noise reduction feature (smooth gradation) in case banding bothers you.

The LG UQ91 TV uses a 50Hz (or 60Hz, depending on region) panel along with a 120Hz backlight strobe. True, the 75 and 86-inch diagonals are equipped with matrices with a refresh rate of 100 / 120 Hz, so they will undoubtedly work better than the smaller sizes.

As measured, the UQ9100 shows an average output latency of 10.3ms in gaming mode. With such good numbers, the game can really be fun. But keep in mind that outside of the game mode with ALLM, the input lag grows significantly to about 118ms, which is already a lot even for leisurely games.

The UQ9100 runs LG’s latest webOS 22, and while it’s not a major upgrade from last year, there are some improvements and additions worth mentioning. Basically, we have the same platform that we saw in the LG C2 OLED. The user interface still takes up the entire screen.

The latest version of webOS is very similar to Google TV and the new Tizen. Smart TV platforms seem to be opting for a more personalized experience, and so the new webOS 22 is trying to provide options tailored to your viewing habits. That is, there is no escape from personalized advertising, recommendations, and even shopping offers.

The first addition in the 2022 version is user profiles. Now every member of the family can have their favorite settings and apps for streaming services. Please note that this does not affect the picture settings of the TV itself, as they remain universal across all profiles.

It is noticeable that the new webOS is faster than previous versions. Applications will open faster and navigation will be smoother, which will definitely make working with them more enjoyable. LG also included two popular voice support platforms Amazon Alexa and Google Assistant.

There is a Home Dashboard that allows you to get an overview of all TV connections. Other available features include screen sharing, a web browser, the ability to add a USB camera, and Multi-View capabilities. The updated Magic Remote has more dedicated buttons.

Where we previously only had buttons for Netflix and Amazon Prime, now we also get Disney+, LG channels and dedicated buttons for both voice assistants. Also gone are the dedicated play buttons. The latest Magic Remote may look different than before, but it remains as functional as ever.

Model LG 65UQ9100 is equipped with a conventional 2.0-channel audio system with a total power of 20 watts. The TV can be loud, dialogue is crisp and clear, but the audio lacks bass, feels a little flat in action scenes, and is completely devoid of surround sound.

The UQ9100 has two sets of ports on the right side of the rear panel. Among the side connectors we find a pair of HDMI ports (one with eARC ) along with one USB port and terrestrial and satellite antenna jacks (their number varies depending on the region). On the back is another HDMI input, another USB port, a digital optical audio output, and an Ethernet port. All LG UHD models only have HDMI 2.0 ports. The most affordable model with HDMI 2.1 this year is the QNED80. Built-in Wi-Fi (802.11ac) and Bluetooth 5.0, which provides a better and more stable connection.

The specifications of the LG UQ91 TV don’t differ much from last year’s budget offerings. It can be an ideal inexpensive option as a second TV. But if you’re looking for a basic TV, make sure your expectations are met, at least in terms of picture quality. And if that suits you, then its low price certainly crowds out all its shortcomings.