With the release of the new Panasonic JZ1000 TV series, the manufacturer is targeting the discerning buyer. Why bother making the model thin enough to hang on the wall when you can use a rotating stand? Is the age of upscaling still not over, with 4K content already in abundance.

The first thing to look at is the TV lines that will be available in the Panasonic JZ1000 series. As we remember, Panasonic left the US and Australian markets, so in 2021 the “distribution” of new models raises many questions.

The appearance of the Panasonic TX-55JZ1000 is minimalistic and made in a positive way. The bezels around the screen are very thin and the Panasonic markings in the center of the bottom bezel are very modest. Unlike the JZ2000 , the audio system in the new product is unremarkable – two broadband emitters of 15 W each are installed. Therefore, there is no housing expansion under the bottom of the screen. 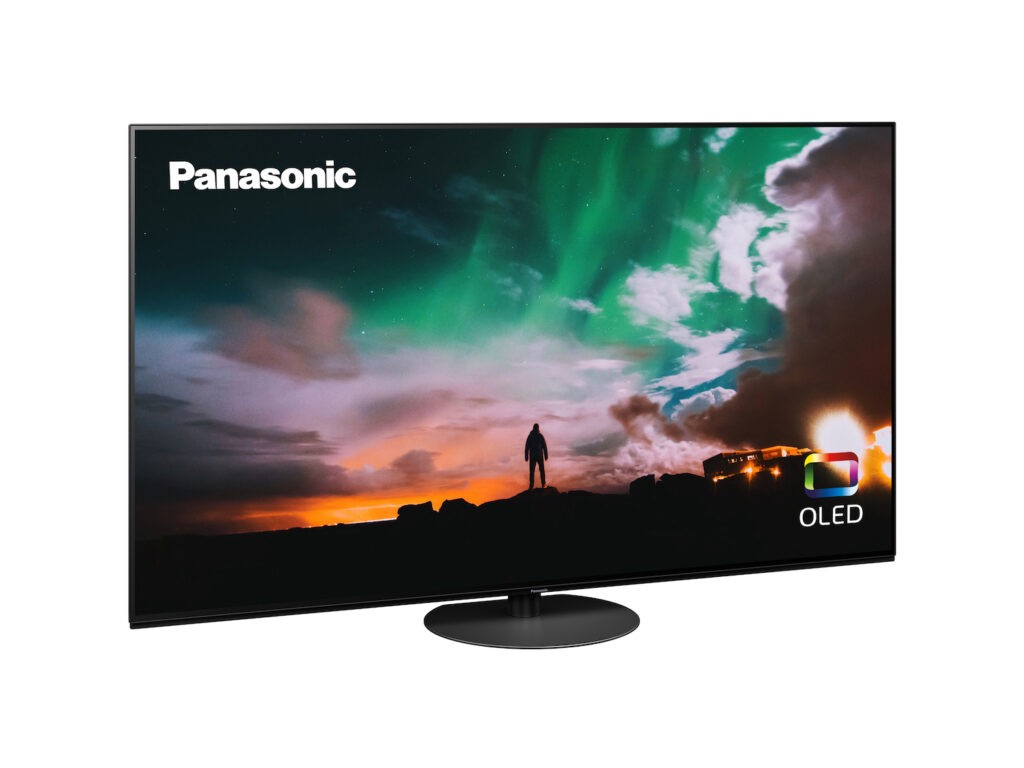 But when viewed in profile, the Panasonic JZ1000 is pretty thick. Yes, this model is slimmer than many cheap alternative 4K TVs. But where it has the maximum depth for installing all the electronic stuffing, the TV received almost 70 mm. Hanging the JZR1000 on a wall without a protruding case will not work.

Panasonic’s TX-55JZ1000 has a heavy, almost round stand in the middle of the case. The JZ1000 series does not need a wide installation surface. On such a stand 55, the diagonal rotates by almost 30 degrees, which allows you to comfortably adjust the TV depending on how many people will watch it.

This, of course, is not a tv, but it is convenient that you will not find many of Panasonic’s competitors. It is worth noting that the TX-48JZ1000 TV uses a different stand of two legs, which can be installed either closer to the center or closer to the edges of the screen. 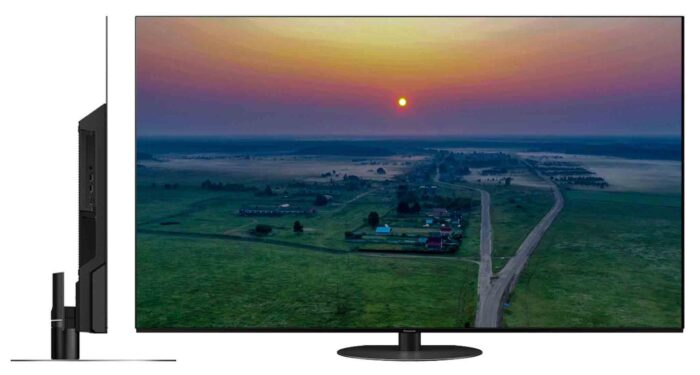 The 55JZ1000 is equipped with Panasonic’s “Master HDR OLED” technology. Recall that the JZ2000 series uses a different processing with the help of “Master HDR OLED Professional Edition” – this is one of the differences between JZ1000 and JZ2000. Despite this, both series are equipped with the “HCX Pro AI” processor. As always, Panasonic is pleased with the full range of HDR standards – these are HLG, HDR10, HDR10 +, HDR10 + Adaptive and Dolby Vision . Hopefully LG, Samsung and Sony will be able to boast of this someday.

For the user on Panasonic TX JZ1000 TVs, the “Director” and “Netflix Calibration” picture modes are available (who has a Netflix subscription ). Further, the presence of a built-in light sensor provides support for Dolby Vision IQ , Dolby Vision Vivid and Dolby Vision Dark.

Panasonic TVs have never been the leader among Smart TV platforms. But the latest version of the proprietary interface my Home Screen 6.0 is still the best of all the previous ones. Yes, the platform lags a little behind Tizen-based Samsung or LG’s webOS, but my Home Screen 6.0 is clear, logical and easy to navigate.

Control is carried out using a fairly large remote control. On the positive side, you can note the decent size of the buttons and legible markings. Let Samsung learn from Panasonic in this part. The main thing is that such a remote control will not get lost in the folds of the sofa. In a word, some people will like the remote control, but some will not. 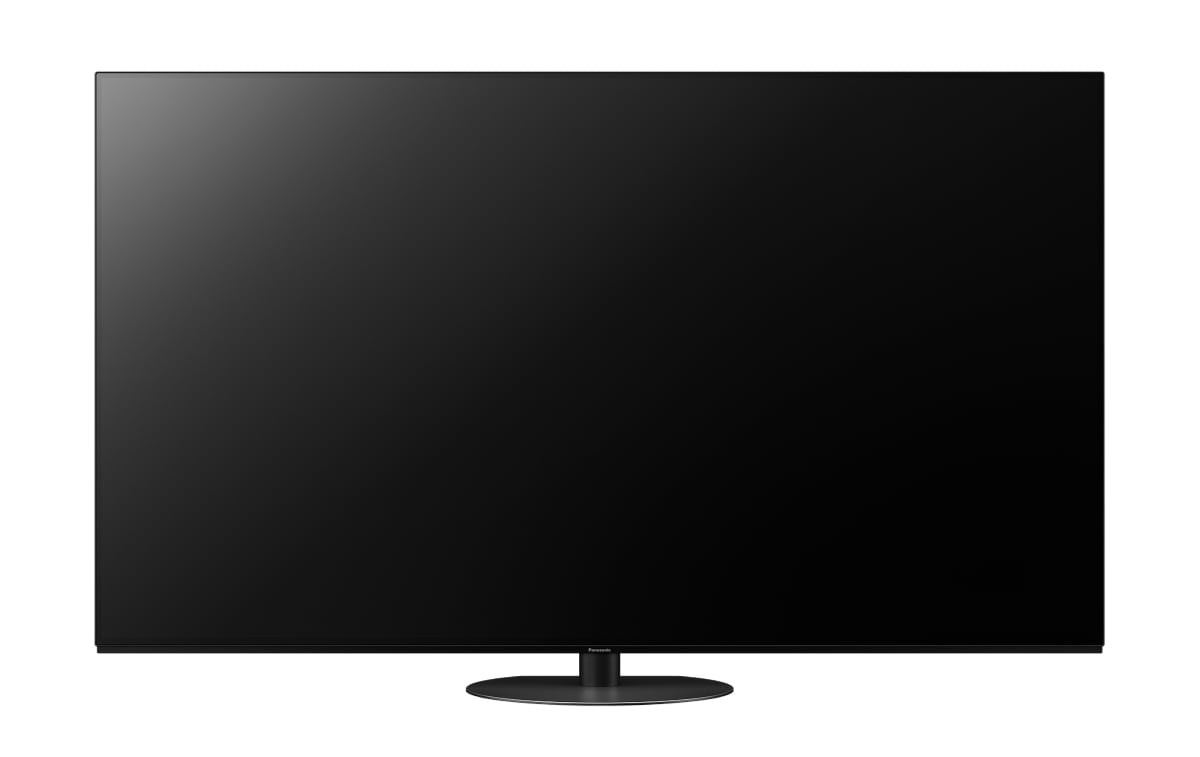 The Panasonic 55JZ1000 has a good balance in the settings menu. Menu items are voluminous, but not confusing. You don’t need to be a professional customizer to get a high-quality image, it doesn’t take a lot of time, and the picture on the screen will be amazing. Especially after tuning, the JZ1000 is pleased with the high-quality 4K content. As usual, OLED panels have vibrant elements, deep and expansive blacks.

The black levels that the Panasonic JZ1000 is capable of generating are staggering. Even though this Panasonic OLED TV is not ranked third, it is much brighter than other manufacturers’ OLEDs. This means a wider contrast ratio and more convincing picture detail. JZ1000 models deliver pure, bright white that appears on screen without unnecessary splashing.

The color palette of the 55JZ1000 is extensive. There is no limit to the realistic tone and hue variations that Panasonic can reproduce. The detail levels are impressive and the new product is capable of displaying test images correctly. By the way, a highly textured fragment (dense and multi-colored picture) looks great, but some TVs of a lower class cannot afford it – the picture simply evaporates on the screen. But Panasonic does its job of transferring all the information it needs to the screen without any difficulty.

However, there are also some downsides. For example, motion processing. In the JZR1000 models, as in other advanced TVs, you should carefully consider the settings in the menu. Smooth movement is provided by the Intelligent Frame Creation function. This appears to be the biggest obstacle to smooth on-screen performance. Therefore, it is recommended to first completely disable this function, and then see if adjustments are needed.

When it comes to scaling content below 4K, Panasonic does the job well, but not great. Sure, using native 4K is impressive, with subtle contrasts, low-light details, great tones and textures. Overall detail levels drop slightly at 720p, however, and the Panasonic JZR1000 doesn’t show any significant artifacts.

The TX-55JZ1000’s massive rear panel houses four HDMI inputs. All of them support HDMI 2.1 auto low latency mode, some of them support variable refresh rate at 4K. One of these ports is eARC compliant.

Additionally, a connection is available via three USB inputs (one 3.0, two 2.0), a CI card slot, an Ethernet connector and TV tuner antennas. Wireless connectivity is provided by dual band Wi-Fi and Bluetooth. In terms of outputs, there is a digital optical jack and an analog 3.5mm jack that can be switched between headphone output and active subwoofer output.

If in a store you have to compare the soundtrack of the JZR2000 and the JZR1000, then the difference in sound characteristics makes it clear that the 2021 1000 series in question is a cheaper option.

Unlike the flagship version of the JZ2000, the 1000-series models work with the most common sound system. These are two 15W full-range speakers. This is definitely not the most suitable sound scheme installed on an OLED TV.

But there is nothing unpleasant about the sound of the Panasonic JZR1000. In fact, dialogues are clear, they don’t get harsh, even when the volume is turned on at full 30 watts. The sound coverage is restrained and non-dynamic, we can say that it is small-scale, everything sounds somehow insipid.

The picture quality delivered by Panasonic JZ1000 is outstanding: bright, high contrast, lavishly detailed and with deep darks and blacks. This is due to OLED technology. The design is comparatively flawless, and Panasonic’s Smart TVs perform better.

However, at such a cost, there is a desire to “fix” something in the sound. It cannot be denied that some competitive TVs deliver this! Apparently, you will have to buy a soundbar right away. All in all, the TX-55JZ1000 should be taken as it is.

What is the most popular 8K TV screen size?

In preparing the article, materials from https://ultrahd.su/tv/panasonic/tx-55jzr1000-obzor.html were used. Visit article here.