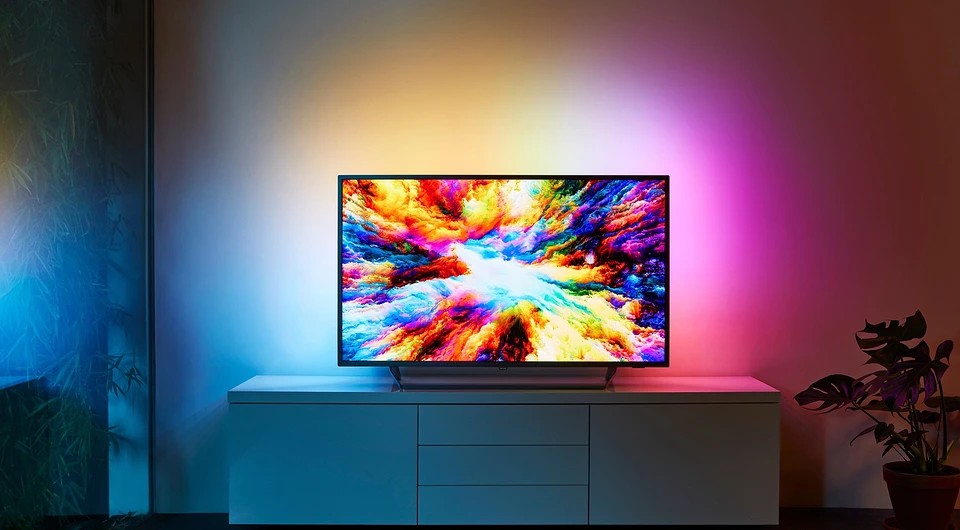 A few years ago, the advisability of buying a 4K TV was questionable: there was not so much content in this resolution, so it seemed not easy to feel the real benefits of expensive devices.

Now everything has fallen into place: movies in 4K can be watched by subscription in online cinemas, and TVs themselves have become much more affordable. In addition, when buying a 4K model, you get a “bonus” progressive filling with the most modern options like the Smart TV system on Android OS. This is easy to see on the example of our today’s hero, Philips 50PUS7303 .

Why did we choose exactly 50 inches? The fact is that the high definition of the image of 4K models allows you to comfortably watch them (and have fun) from a short distance. For example, the picture on the 50PUS7303 screen looks great from 2 meters away, so the TV is quite suitable even for owners of small apartments.

Another important difference between the 50PUS7303 and earlier models is its shallow depth, just over 8 cm. For the screen, a VA panel with Direct LED backlighting is used. If you have not had time to get acquainted with the Direct LED technology, its main feature is that the backlight LEDs are located across the entire area of ​​the matrix. This allows you to control the brightness level of individual groups and in fact provides deeper blacks and contrasting images.

In addition to the modern matrix, the TV has received a number of technologies for transmitting the most realistic picture. They are well known, but not often found in TV models in this price segment.

HDR Plus allows you to achieve a level of brightness and contrast not available on conventional TVs. Even in the darkest and lightest areas of the image, you can see the smallest details. In addition, due to the use of HDR Plus, the color range also expands: the colors become as natural as possible, close in shade to the real colors of the filmed objects. HDR Plus support is already included in the content of many online services: for example, Netflix.

Micro Dimming Pro specially designed to intelligently adjust the contrast of dynamic scenes. The first versions of Micro Dimming split the image into 300 different zones and could adjust the contrast in each of them individually. More advanced technology with the Pro prefix works with a significantly larger number of areas: there are already 6400 of them. Regardless of the lighting conditions in different parts of the screen, Micro Dimming Pro guarantees excellent color reproduction.

Ambilight – Philips patented external backlight technology. Here the LEDs are installed on three sides: depending on the scene, they create relevant lighting on the wall, as if expanding the boundaries of the screen. This solution not only allows for better immersion in the content being played, but also reduces eye fatigue when watching TV in a dark room. The backlight system can be used not only when the TV is on: for example, it is ideal as a background night light.

If, when choosing a computer, we always pay attention to the processor model, TV buyers usually do not attach importance to this component. But in vain: the higher the resolution, the higher the power required for image processing. This is especially true for dynamic scenes: with a lack of power, the user is guaranteed to get freezes and blurry frames. The new Philips 7303 TV series uses the P5 processor, which is noticeably more productive than previous models. This is how the 50PUS7303 differs from its budget counterparts, which are abundant on the markets.

The Android 8 platform is used as the operating system for Smart TV. Accordingly, this significantly expands the capabilities of the TV: the user has a large selection of applications from the official store.

Although the seventh series is actually middle class, it is close to the premium models in image quality. Dynamic action movies in 4K resolution look without visible artifacts, playback is smooth and without delays. The same applies to the menu: by pressing a virtual or physical button, there is no need to wait for a response here, as it was in old TVs with weak processors.

The brightness of the screen is declared at 350 W, which is an excellent indicator for LED models. In practice, the image may appear faded unless the screen is directly exposed to sunlight. In other cases, even on a bright day, the picture is quite expressive.

The branded remote is equipped with a keyboard on the back. It’s a bit unusual, but when it comes to finding content online, these physical buttons come in very handy. Remember how you were typing on virtual keyboards – that’s still something to do …

Philips 50PUS7303 has become another successful model in the line of a reputable manufacturer. Despite the relatively low (for a 4K TV) cost, it uses almost all the main solutions that allow you to get an excellent picture, contrasting and with saturated colors. At the same time, the TV fits perfectly into the interior due to the shallow depth and Ambilight, and the Smart TV on Android makes it much easier to use and provides ample opportunities.