Philips OLED805 TVs are the next new addition to OLED models in 2020. But in 2020, one should not expect any kind of global evolution in TVs of this class. In all previously reviewed OLED models, we saw only an improvement in image processing, but the technology for manufacturing the matrix remains unchanged. This also applies to the Philips OLED 805.

New 2020 Philips OLED TVs have added AI image processing technology to make set-up easy. The device now adjusts itself to the content that is played on the screen. If you want to compare the original frame and the “finished” image after AI processing, you can turn off the function and find the differences as a result of the conversion.

Considering that last year’s Philips OLED models amazed users with brightness and detail, it is worth looking into the Philips 55OLED805 4K HDR TV review to see if the new lineup will be able to occupy its niche 4K TVs.

Agree that Philips’ approach to OLED TV design is quite original. The main design direction is the use of pleasant metallic colors, both in the stand and in the frame. The series of TVs under consideration will be available in two diagonals 55 and 65 inches.

Philips OLED 805 series continues this tradition. The TV screen is almost completely accessible to the user. The thinnest frame around the screen to match the metal stand. The legs are made in the form of a Y-shaped design, but not quite standard, as we saw in last year’s versions.

The installation height of the screen in relation to the stand is rather low. Therefore, if you want to put a soundbar in front of the TV, then it will be problematic. On the other hand, the manufacturer has a new series of Philips OLED 855 TVs. One of the differences is a different T-shaped stand.

In this version, the screen matrix is ​​located above the horizontal surface and there is room for the soundbar. The slim bezel accentuates the signature Ambilight. The brightness of the Ambilight backlight is quite high. But the modern panel easily covers the background lighting with 1000-nits brightness.

Therefore, watching video in a dark room remains comfortable. Some users have liked the backlighting to their liking, although we always try to distance ourselves from the idea that this feature is urgently needed. Philips OLED805 models come with a premium redesigned remote control. The back surface of the remote control is made of a material that is pleasant to the touch. As for the “coveted” HDMI 2.1 interface, it is not in the specification. There is no support for 120 fps with an external video source either. This is the failure of 2020. After all, we expected the 120Hz PlayStation 5 and Xbox Series X game consoles to work with the new TVs.

The deep image processing in the new Philips OLED805 series might put off console lovers. After all, the more global the content processing is, the greater the time delay of the video signal. In the Philips 55OLED805 model under consideration, this parameter is not less than 30 ms. And although this figure is slightly lower in gaming mode, it is impossible to recommend using this OLED model specifically for gaming. Like last year’s Philips OLED models, we see sharp HDR image processing. The screen combines the natural rich blacks of OLED panels with the ability to have areas of sharp contrast next to each other. The video on the screen is amazing, but sometimes you catch yourself on the soap about the “poisonous” image.

Bright and rich sources on the Philips 805 OLED screen really look great, adding a hue of saturation to colors. In general, considering last year’s remarks, the image has become not very hyperreal, but it all depends on the settings.

Of course, the image shouldn’t look overly saturated and contrasty. There are various preset picture modes for a pleasant viewing experience. In this case, Philips has included support for the new Director Mode standard. When turned on, its TV does not change the image (does not subject it to processing), but displays it “as received” from the source.

Unfortunately, Dolby Vision IQ mode will not be available in this series. At least this year, Philips has no plans to implement it. The 55OLED805 / 12 from Philips has an intelligent AI mode. As we know, other manufacturers have mastered this technology of “improving” the picture last year.

From the innovations in the specification, a 4th generation “P5 processing” processor chip from Philips has appeared. According to the manufacturer, the same processing is used as in the previous chip, but it has become possible to better identify the content on the screen using machine learning.

Image processing is now more targeted to local areas of the screen with the P5 Pro Perfect Picture 4-Gen. After being “trained” by analyzing millions of images, the TV can classify current content as nature, movement, face, night, and other combinations of the above.

To see the process of image processing, you can call the corresponding menu option. It will clearly show how AI transforms content. At the bottom of the screen, the video classification will be indicated (in real time), and additional counters will give information: how much is spent on eliminating noise, adjusting sharpness and other standard processing elements.

Above this information will be a split screen showing the normal video on the left and how it looks after processing on the right. This makes it easy to see how “dramatic” noise reduction is in dark scenes, and how colors and contrast subtly transform colors towards a more pleasing and vibrant experience.

One thing to add about brightness: if the image preset is “HDR Film” and the contrast setting is “Optimized Image”, then the peak brightness is approximately 805 nits (10% window) and 944 nits (2% window). These values ​​are reached after some time (image optimization time). Without this, about 50..80 nits are lost. The stark white screen puts out 148 nits.

Philips OLED805 TV series does not come with Bowers & Wilkins speakers. Advanced speakers are likely to be expected this year, but in other flagship models. In general, for such a design of the Philips 55OLED805 / 12 50W TV, sound power is quite enough for comfortable listening.

There hasn’t been any deep testing of the model yet, but the initial look at the sound system is positive. After all, it is not always possible to place speakers with such a total power in a thin case. The models in this series have four passive bass radiators, which add extra weight to the bass response.

The speakers have been upgraded. The emitters are now facing forward. This is a clear improvement over previous models and may be better than what other manufacturers are offering at this price point. 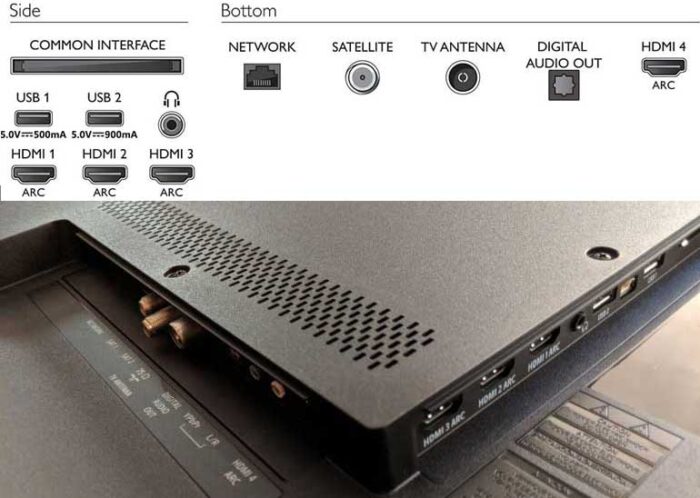 Summarizing all the innovations that have been mentioned, we can conclude that the OLED 805 series has not become a big leap forward. But the steps that the manufacturer has taken make us stop at this model.

If the AI ​​processing is as effective as it seems at first glance, then the model looks really attractive to purchase. Philips 55OLED805 is one of the best OLED TVs out there.

However, the price tag for the series in question has not yet been announced. Therefore, it is worth comparing with a similar class LG OLED65CX , which claims support for HDMI 2.1 at 120 fps, which, unfortunately, is absent in Philips 55OLED805 and Philips 65OLED805.

The same goes for sound. While we doubt the series in question will sound worse compared to other TVs, I would like to compare more deeply with the Philips OLED 934 + with built-in speakers from Bowers & Wilkins. How they will behave if you install both models side by side. On the other hand, if you are considering buying a new 2020 TV, then the OLED805 should definitely be on your shortlist.