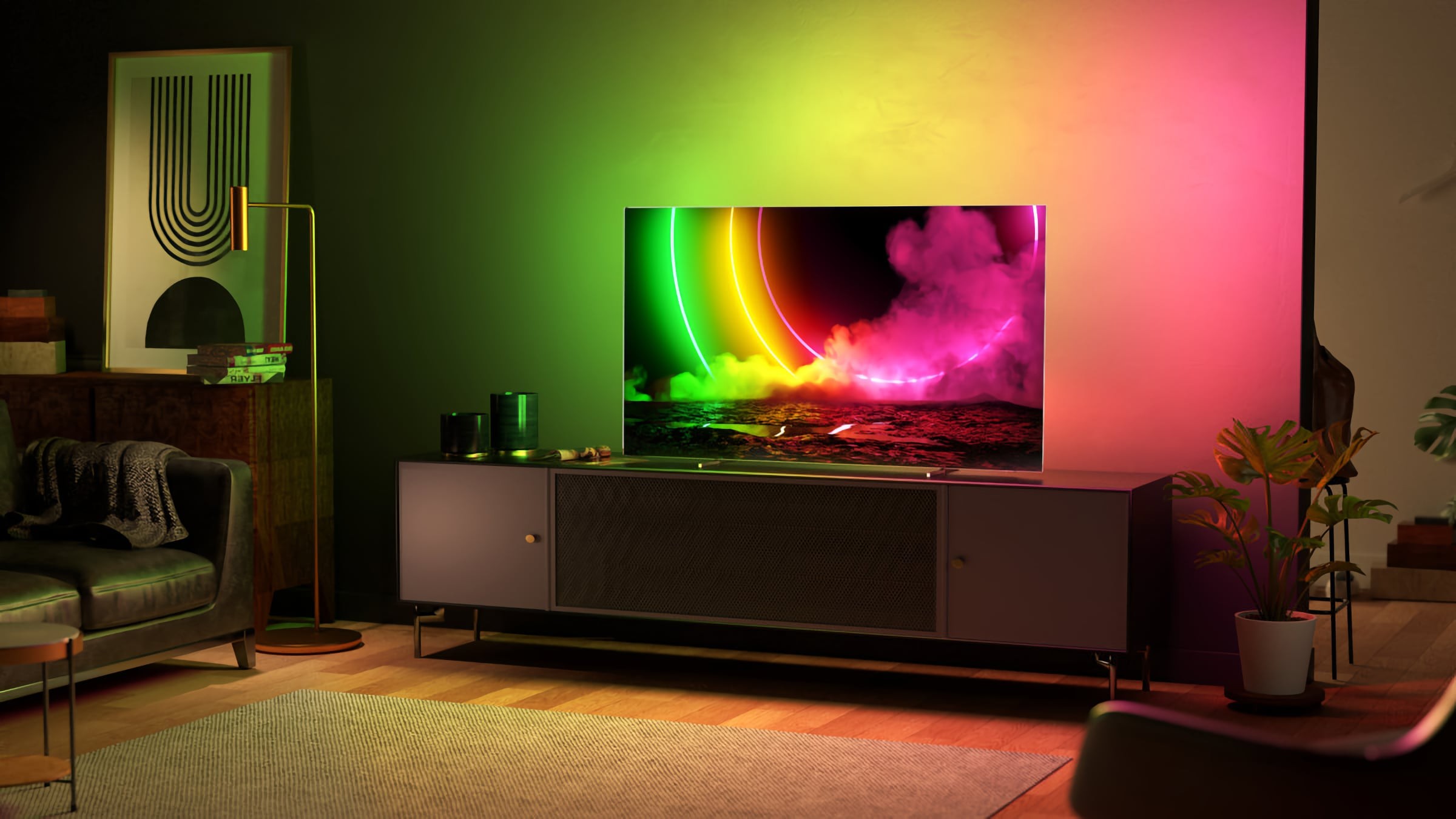 The OLED800 series has been the heart of Philips’ OLED lineup for several years now. In 2021, it will be possible to purchase Philips OLED806 TVs in four diagonals from 48 to 77 inches. The new model is equipped with 4-sided Ambilight, improved 5th generation P5 processor and HDMI 2.1 connectors.

The latter fact allows you to take full advantage of the smooth gaming experience on the next generation consoles. In the proposed review of Philips 55OLED806 TV 4K HDR as a representative of the series, we will carefully consider the functionality and features of the new product.

It seems like the Philips design department (like LG) thinks that it is not worth changing the classics too much. Therefore, the appearance of the OLED806 TV is recognizable. Ultra-thin OLED screen like OLED805 , smoothly curved metal edges, metal back. The most striking change is the two small legs, replacing the chrome beveled legs. They are also available in two colors, and you can choose which side to place in the front. 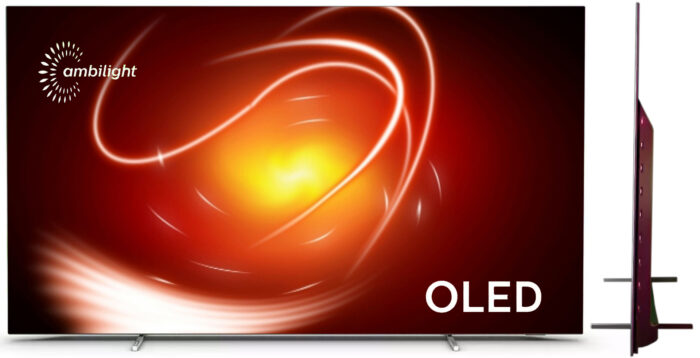 The Philips 55OLED806 TV barely rises a couple of centimeters above the furniture. Therefore, placing the soundbar is not possible without covering part of the screen. In 2020, this problem was solved with the help of a set of adapters, which made it possible to raise the screen a little higher. Unfortunately, this set is no longer available in 2021.

The heart of the Philips OLED806 is the fifth generation P5 image processor. In addition to last year’s achievements, there are three new features: AI Film Detection and Ambient Intelligence, Fast Motion Clarity, and improved burn-in protection measures. The overall performance of the P5 is very good. It provides excellent deinterlacing and quickly and reliably recognizes all video and movie frame rates.

Thanks to AI Film Detection, the P5 processor can now recognize films not only based on the Filmmaker mode flag (which is not yet in use), but also based on real-time analysis of what you are watching. Ambient Intelligence is a complex functionality based on a light sensor that controls more than just brightness.

The Philips OLED806 processor now uses a “lightweight” version of the additional anti-burn technology introduced in the OLED935 . She looks for logos and static visuals and darkens them selectively. The panel has a very wide viewing angle and copes well with reflections. For best results, it is nevertheless recommended to avoid shining light on the screen. 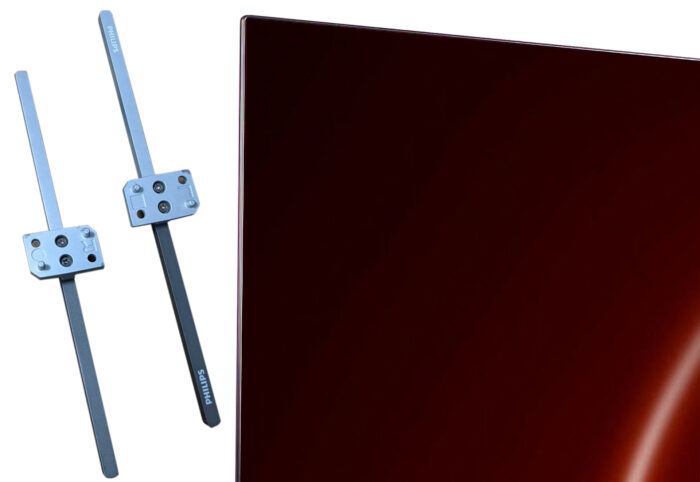 Philips was the only manufacturer last year to not have black frame insertion (BFI) on their OLEDs. Now the option “Sharpness of fast movement” is excellent sharpness of images of moving objects. Of course, you will lose some brightness, and in dark scenes it can be worth the detail, but overall the picture only benefits.

Philips OLED806 is equipped with a standard OLED panel. There is no innovation in the pixel structure. The screen has excellent color uniformity. The director mode is great for viewing in dark environments. In some light conditions, it is best to switch to the new Home Theater mode. This gives a good balance between the very intense Vivid and Filmmaker reference modes.

Philips 55OLED806 / 12 supports HDR10, HLG, Dolby Vision and HDR10 +. It’s a very wide selection, with HDR10 + Adaptive (with ambient light sensor compensation) introduced in 2021. Sorry, no Dolby Vision IQ. Peak brightness is 800 nits in a 10% window, and a completely white field reaches 140 nits. These numbers are almost identical to last year’s. The color range is 95% DCI-P3 and 69% Rec2020, which is in line with the average OLED performance.

OLED 806 is powered by the new MT5895 chipset with a quad-core ARM Cortex-A73 processor, 3GB of RAM and a Mali G52 GPU. This is the same chipset used in Sony’s OLED models. It provides a very smooth and pleasant user experience, the menus are responsive and the navigation is very fluid.

Philips’ 55OLED806 / 12 is already running Android 10. But it is not yet using the new Google TV interface. Philips plans to migrate to Android TV 11 from Google TV in the first quarter of 2022. In the current Android TV interface, you can still customize the home screen to your liking. The Philips settings menu definitely needs an update. They are not integrated into the Android TV menu and occupy the entire screen or most of it.

The remote control from Philips OLED805 has also survived. It is a long and slender model, this time in silver instead of black. The back is still trimmed with soft Muirhead leather. The keys are very light to the touch, lie perfectly on the surface of the remote control and fit snugly together. As soon as you touch the key, the remote control is illuminated for a short time. But to do this, you first need to press it … Here we prefer Sony’s approach with a motion sensor.

Philips OLED806 TV series has one TV tuner and one CI + slot. You can record to USB hard disk, but you cannot watch another channel at the same time. You can watch HDR via Netflix (Dolby Vision) and YouTube (HLG and HDR10). The media player plays almost all files including HDR video. It only rejects DivX and Xvid, but supports DTS. Airplay 2 is missing, like many other manufacturers, there is only DTS Play-Fi. With this multi-room Wi-Fi system, you can create a wireless surround sound system and, for example, listen to TV sound on your smartphone or through a wireless speaker in the kitchen.

The OLED806 has 4-sided Ambilight, which is especially nice for a wall-mounted TV. The backlight now has many functions in addition to normal use. For example, you can use Ambilight as Lounge Light. There’s Ambilight Music if you need lighting effects to accompany your audio, and thanks to AmbiSleep and AmbiWakeup, you can sleep and wake up with this beautiful lighting.

In gaming mode, the output latency is 14.5ms. This is a great result. Plus, HDMI 2.1 connections support everything you need for the best gaming experience: ALLM, 4K120 and VRR (48-120Hz). Philips offers HDMI VRR and AMD Freesync, and is also working on NVIDIA Gsync compatibility. HGiG is also supported.

OLED806 TV sound system inherited from OLED805. 50W of power delivers more than decent sound with satisfying bass. Surround sound is very good for watching movies, and there is also support for Dolby Atmos. The TV works great with a lot of music formats.

OLED806 is Philips’ first OLED model with HDMI 2.1. In addition to the two HDMI 2.0 connectors, there are also two HDMI 2.1 connectors. Everything with ARC . They offer a maximum bandwidth of 48 Gbps and support the following HDMI 2.1 features: ALLM, 4K / 120 HFR, and VRR (HDMI VRR and AMD Freesync).

The TV is equipped with three USB ports, a LAN port. There is wireless connectivity and Bluetooth (for devices). Rounding out the list is a headphone and digital optical output. All connections point to the side or downward, ideal for wall mounting.

A few words to conclude our review of the OLED806 from Philips. It is a good successor to OLED805. The TV is now equipped with HDMI 2.1 ports. It is a pity that there are only two of them. What other disadvantages do you need to consider when choosing?

You can press multiple keys on the remote control at the same time. No Dolby Vision IQ. In general, Philips OLED806 performs extremely well. And since it is on the same price level as the LG C1, you can safely give advice on its choice.

In preparing the article, materials from https://ultrahd.su/tv/philips/55oled806-obzor.html were used. Visit article here.