In 2020, Philips TVs, which are produced by the Chinese division of the Dutch company, stood out from similar OLED lines of competitors by the lack of a new HDMI 2.1 interface. But in 2021, this problem was solved in the new series of Philips OLED856 TVs and the related OLED806 series. Now you don’t have to choose between HDMI 2.1 and Ambilight.

Thus, Philips changes the situation in the field of High-End TV, since the specification was supplemented with HDMI 2.1. Another question that remains open is whether the Philips OLED856 will be able to compete with the stunning picture quality of the LG C1, or will have to live with the Ambilight technology. Let’s take a look at the Philips 55OLED856 UHD OLED HDR TV review and try to figure it out.

First, let’s highlight the highlights of Philips’ OLED 856 series. This series is presented in two diagonals 55 and 65 inches. The TVs are equipped with LG’s 10-bit OLED panel, which has “perfect blacks” with infinite contrast. The peak brightness in the Philips OLED856 series reaches almost 800 nits. At the same time, the models are equipped with a powerful P5 Gen 5 AI processor. All this is accompanied by support for Adaptive HDR10 + and Dolby Vision.

Philips OLED856 series has an extremely narrow bezel. It, like the back of the TV, is made of a metal structure. At the same time, the depth of the 55OLED856 TV is very small. This makes the 2021 OLED Series 8 look great when mounted on a wall. Interfaces facing down and to the right of the screen remain easy to access.

The main and main difference between OLED856 and OLED806 is the central swivel stand, except for the availability of diagonal sizes in these lines. For some reason, the Philips OLED856 looks really great, and the presence of a tilt-and-turn stand gives some plus when installed on a horizontal surface.

But for the majority of users who previously preferred backlighting, the 55OLED856 is not a great design, but the 4-way Ambilight feature that creates an incredible atmosphere. We have already talked about all the advantages of such a proprietary backlight on our UltraHD.su resource.

The only drawback, albeit a very minor one, is that the Philips OLED856 TVs do not have a cable management system. Therefore, the user will have to invent something himself so that the wired connections look neat. As previously mentioned, the Philips 55 OLED 856 TV screen is a 10-bit OLED panel with perfect blacks and theoretically infinitely high contrast. This performance cannot be achieved with any conventional LED backlit LCD TV, not even Mini-LED backlit TVs. As a result, the picture quality in a dark room is really impressive.

Although glare from external light sources is fairly well neutralized, the picture quality on the 55 OLED 856 TV decreases with increased stray light, which is partly due to lower brightness and partly due to automatic brightness limiting (ABL). ABL function prevents burning of OLED screen.

It darkens more areas where the content is too bright (for example, the channel logo), so that the OLEDs are not damaged by overheating. Thus, it is one of the most effective protective mechanisms to partially solve the problem of OLED burns.

With a maximum brightness of about 800 nits, the 55OLED856 model becomes quite bright – this is a feature of the OLED matrix. Combined with a wide color space, the TV delivers really good HDR performance that rivals other OLED models. The viewing angle remains extremely wide, so you can sit in the room wherever you want.

This is complemented by the powerful 5th generation P5 AI processor in the new Philips 856 OLED TVs. Its computing power is sufficient for image optimization and scaling. The processor is also tuned to take measures against OLED burn-in, such as pixel shifting and logo dimming. As support for dynamic HDR formats, the spec includes Dolby Vision and HDR10 + Adaptive, but no Dolby Vision IQ . 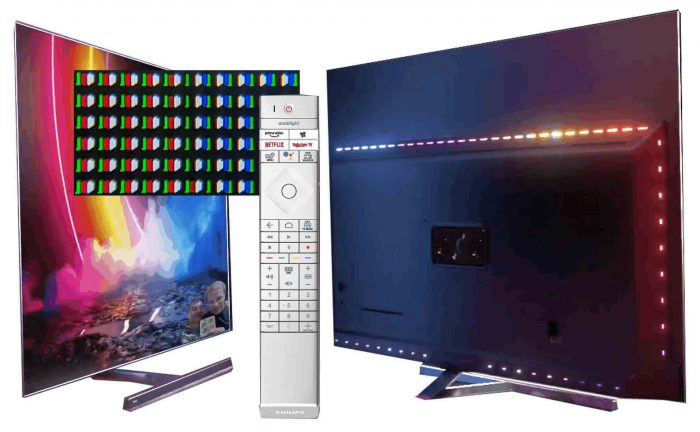 The dynamic scenes in the OLED856 are truly impressive. Not surprisingly, the panel can operate in the 40 to 120 Hz range. The 55OLED856 Philips TV has an almost instant response – less than 1ms. Thus, there is practically no blurring on the screen. This is especially important for sports broadcasters and game consoles.

However, short response times can lead to stuttering when content is displayed at a low refresh rate. These image jerking can be minimized by enabling the BFI function, but this can lead to soap opera effects and artifacts in “heavy” content. On the other hand, jitter is not an issue with Philips OLED856 and can be removed from all Full HD sources.

The good news is that a lot has changed in new Philips models since 2021. This applies to gaming functions. With good motion processing, low input lag of about 10ms at 4K @ 60Hz, and two HDMI 2.1 interfaces, the 55 OLED856 has everything a gamer could wish for.

By the way, these interfaces support 4K @ 120Hz with about 6ms input lag, adjustable refresh rate via FreeSync Premium and compatibility with G-Sync as well as ALLM. Plus, Xbox users can enjoy Dolby Gaming with 4-way Ambilight. 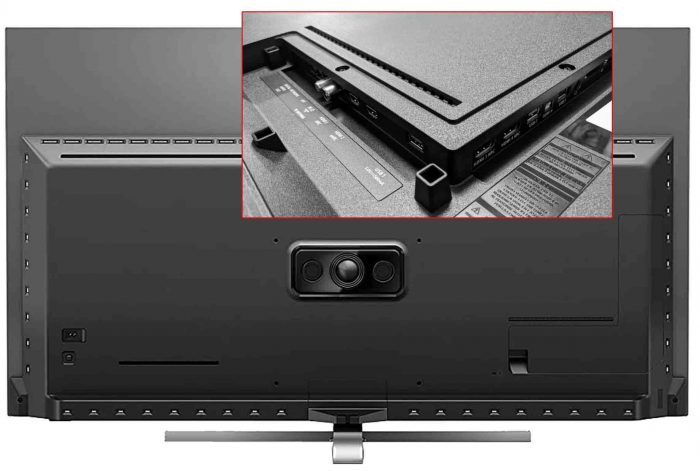 The OLED856 series has a 2.1 50W sound system (RMS). Indeed, this is some achievement for flat screen TVs. But upon closer examination, this is not surprising, since this is the same acoustics system that was used in its predecessor. However, this is by no means a disadvantage.

The treble and mids are well matched for clear sound quality. In addition, OLED856 may experience slight distortion at fairly high volume levels. Unfortunately, the bass is lacking, which is not surprising for a TV with this design.

The overall sound quality is not bad, but since the Philips OLED856 is quite an expensive model, the user will probably not be satisfied with the built-in sound system. But for the use of a separate Hi-Fi soundbar, everything is there – HDMI eARC interfaces support both DTS and Dolby Atmos.

Lots of features in Android 10

In all fairness, the new version of the Andoird TV operating system is pretty much bringing visual innovation with it. It now runs more smoothly. Thanks to the Google Play Store, the selection of apps is huge and all common streaming services are supported.

The remote control makes a good impression, but it is a little too big. If navigation with the remote control is problematic, then you can easily use the built-in voice assistant Google Assistant. Alexa is also available, but not in all markets and requires a separate device. Apple Airplay, however, is not available. Unfortunately, the OLED856 does not have a dual tuner, but the time shift and USB recording functions remain available.

Overall, Philips OLED 856 performed very well. No wonder. It has excellent image processing and upscaling that is no less than its predecessor OLED805 . Superior calibration provides an immersive image with more black details and beautiful natural colors.

The Filmmaker mode is for clean picture lovers, and the new Home Theater mode is a good choice for those who watch in a lit room. Philips’ Fast Motion Clarity makes every detail available in action scenes, making it a great addition for sports enthusiasts.

The optional OLED anti-scald technology brings some peace of mind to those who question OLED panels. In addition, the Philips 55OLED856 / 12 TV provides extensive support for HDR standards. It’s a shame that Dolby Vision IQ is missing. Overall, the models in this series have excellent OLED performance with high peak brightness and very rich colors.