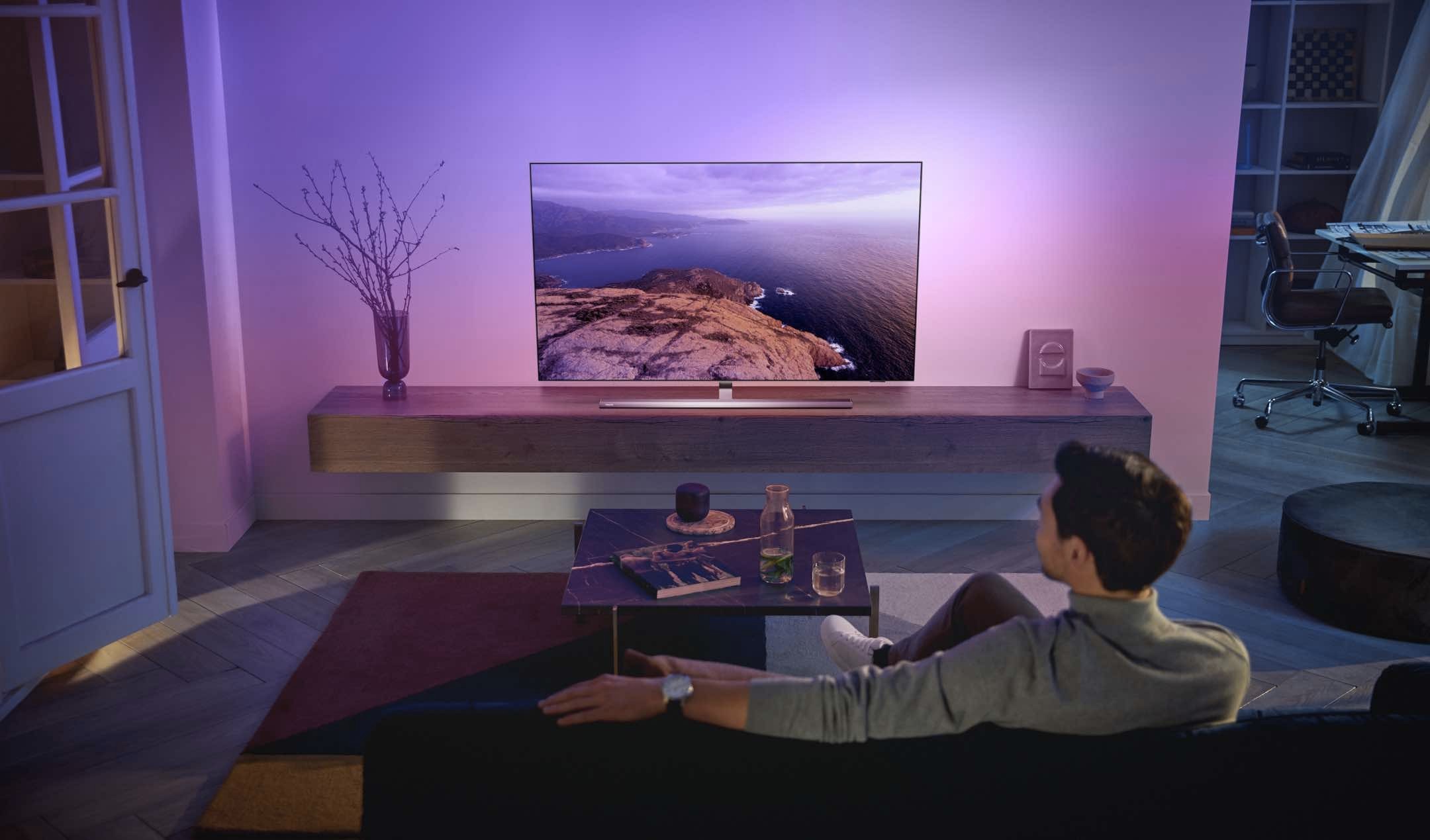 The Philips PML9507 is one of the most extravagant TV series available today. The revolutionary new Mini LED technology makes the PML9507 a brilliant TV in all areas. This is the second generation of Philips with mini-LED backlighting. Together with the 6th generation AI-powered P5 Perfect Picture Engine, it delivers the ultimate viewing experience. 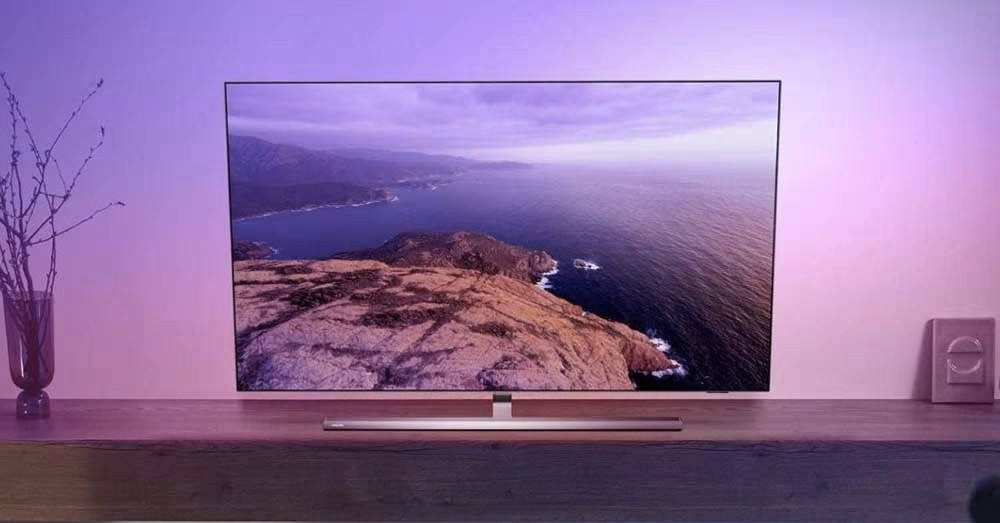 In the PML9507 TV we will find all the features associated with the new chip: it is the IMAX Enhanced option, and the ambient light sensor … Not to mention two HDMI 2.0 inputs and two HDMI 2.1 inputs compatible with eARC, VRR (from 40 Hz to 120 Hz ), HFR 4K/120, ALLM, FreeSync Premium Pro and G-Sync. In the Philips 55PML9507/12 4K HDR TV review, we will look at the main features of the new product.

The Philips 55PML9507/12 TV looks fantastic, although the design is almost identical to last year’s Philips 9506 . The screen is bigger than anything else, the gray bezel is made from premium aluminum giving it a shiny silver look. Anthracite legs slide out in height, so you can easily place even an advanced soundbar under the screen. TV looks stylish and when the screen is lowered directly on the legs.

All switching connectors look either down or sideways. This will allow you to easily mount the 55PML9507 TV on the wall using the VESA 300 x 200 bracket. Although the TV does not seem thin at its thickness of 8.6 cm, even slightly receding from the wall, it makes an indelible impression.

The 55PML9507 TV has a full array mini-LED backlight behind a 10-bit VA panel with a refresh rate of 120Hz. We assume that up to 1024 backlight zones are simultaneously controlled. Thus, the high native contrast of the VA sensor, combined with this precise local dimming, results in very deep levels of blacks. Yes, this still cannot be compared with an OLED TV, for example, Philips OLED807 , but it is definitely impressive.

The Philips MiniLED 9507 TV supports all major HDR formats (HDR10, HLG, Dolby Vision, HDR10+) and delivers a truly immersive big screen experience with true-to-life colors. The Philips P5 Gen 6 AI processor delivers an image so lifelike you feel like you could walk into it.

The maximum peak brightness of the Philips 55 PML9507 mini LED TV can reach 1500 nits. This high value is enough for this model to work in rooms with a lot of natural light or bright artificial sources, as well as to create a full HDR effect.

The first thing that catches your eye on the 9507 TV is the Ambilight backlight from all 4 sides. The presence of such additional lighting gives an unprecedented feeling of continuing the image off the screen. There is more illumination, and the transition from the panel to the wall creates an incredible effect, which is fully manifested when the model is mounted through the VESA bracket.

Ambilight’s proprietary technology includes smart LEDs on four sides. But a need that users have dreamed of for a long time has been met. Namely, the ability to separately turn on (or off) the LEDs on the bottom of the Philips PML9507 TV.

Philips PML9507 series smart TV features are provided by Android TV OS (v11). Perhaps in the future it will be upgraded to the new Google TV system. Streaming services are served reliably, but there is currently no Dolby Atmos support from Disney+. Unlike the previous version, the Apple TV app appeared.

Navigating the PML9507’s interface, as well as the endless and confusing menus of the TV’s settings, is done with a large, leather-covered, backlit remote control. Philips is making the most of its partnership with leather maker Muirhead (as many of its latest headphones demonstrate), and the tactility is undeniable.

If anything, there is certainly less controversy than with the button layout, which seems a bit arbitrary. The remote has a microphone and a button to call Google Assistant. Controlling the PML9507 with just your voice is simple and straightforward – as long as you don’t try to do something too complicated (such as entering the setup menu).

The Philips 9507 audio system has been significantly upgraded. Firstly, two mid-range speakers have been added, and secondly, the total power has increased to 70 watts. The rear-facing drivers give hope for more bass power than you would normally expect from such a designer, and they almost live up to those expectations.

The bass is certainly present more than usual in the built-in sound systems of flat-panel TVs, and yet not in an aloof manner. Instead, the low-frequency response is quite nimble, and always feels properly balanced with the rest of the soundstage.

The treble details also sound round and clear enough without getting lost in the bass, plus there’s plenty of room for dialogue. The PML9507 also has access to DTS Play-Fi TV, which allows you to stream music from a TV in any room via external devices to listen to music in any room.

Speaking of gaming, the Philips PML9507 can handle just about anything: with the Phillips P5 Gen6 processor, it can handle even the most dynamic games thanks to its greatly reduced output latency. When you connect a game console, the TV will automatically switch to low latency settings. VRR support extends to AMD FreeSync and Nvidia G-Sync .

If you own a PS5 or XBOX S series, you can rely on this TV to meet your every need for performance, thanks also to its two full-bandwidth HDMI 2.1 ports. By the way, the game mode Ambilight will make all the thrills even more vivid.

In terms of switching capabilities, nothing has changed compared to 2021. There are four HDMI ports, two of which are HDMI 2.1 capable of handling 4K at 120Hz. There is support for eARC over HDMI, allowing the TV to stream Dolby Atmos audio to compatible soundbars or AV receivers, while HDMI ports connect to USB ports for media playback and regular Wi-Fi and Bluetooth.

All in all, the Philips PML9507 is a fantastic TV with no major flaws, so the high price is more than justified by all the features and great picture. The TV offers extreme convenience, consistently good performance and luxurious features. Some may find it too extravagant, but if you want the best in your main TV, you can’t go wrong with it!