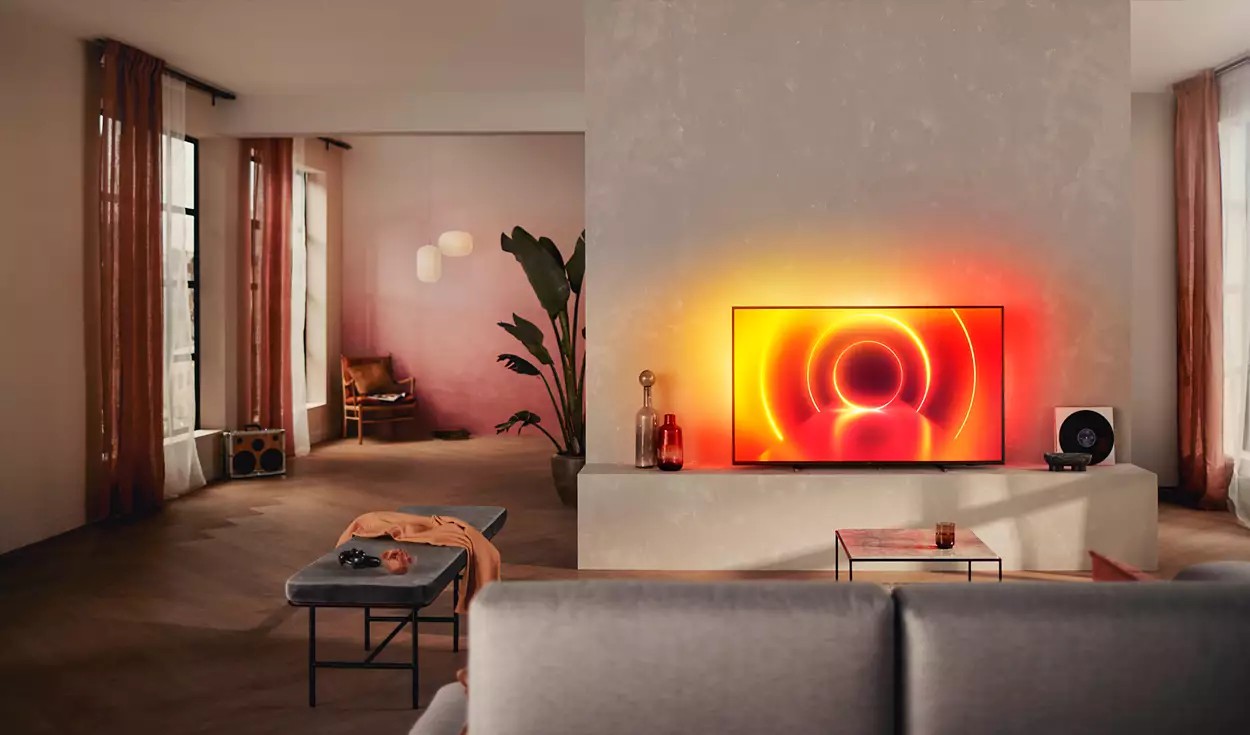 Philips PUS7800 range of entry-level 4K TVs with Ambilight comes in the PUS7805 and PUS7855 series. These series, identical in design, differ in body color. Metallic gray for the 7805 and silver for the 7855. Models of these series have three-sided lighting (from the sides and top) Ambilight.

The hardware part is built on the P5 Perfect Picture image processor. The user interface is based on Philips’ own Saphi platform. Due to this, there are some limitations of the smart TV functions. In the proposed Philips 43PUS7805 / 60 TV 4K HDR review as a representative of the series, we will take a closer look at the main features of the TV.

The PUS7805 TV case is almost completely plastic. Externally, the TV is similar to the PUS7505 series (without Ambilight). The bezels are thin, although the lower one with the Philips logo is almost twice as thick. The TV also has beautiful plastic legs, but it is possible that they have a metal rod invisible from the outside. The legs are located closer to the edges, the TV stands on the stand confidently and without swinging.

You can use the VESA mount and mount the TV to the wall. This is also a very convenient option. In this case, there will be no problems with the cables, since all the connectors on the Philips 7805 are directed either downward or sideways. Therefore, it can be installed very close to the wall. Although the manufacturer recommends a distance of 15 cm for Ambilight to work effectively. The remote control is also made of plastic, has a traditional number and arrangement of buttons. It has glossy sides, which may not be to everyone’s liking due to the sticky fingerprints. Overall, we can say that the style is modern and attractive, and the quality of materials and workmanship is not worse than that of Korean competitors.

The PUS 7805 TV features 3-sided Ambilight. LEDs around the rear panel change color and intensity depending on what is happening on the screen. In addition, it is possible to change the perception by changing the speed of the backlight response. The effect of being immersed in the “television” reality increases many times over.

Philips PUS7805 uses a VA type liquid crystal matrix. The main advantage of this type of matrix, in contrast to IPS or ADS, is a higher contrast. The thermogram shows that the TV uses Direct LED backlighting, which is typical for many budget TVs due to the lower cost.

The biggest color errors are seen in human skin tones. The faces of the people on the screen are slightly redder than they should be. The irritability of this phenomenon depends, of course, on personal sensitivity to color nuances, but it cannot be denied that on some materials this is too noticeable. Calibration is required to remove the “red skin” effect. Fortunately, the TV has the right options for this.

The color temperature of white in Cinema mode is approximately 6700 K, which is not much higher than the standard provides. Colors are slightly faded in the horizontal direction, which is typical for VA LCDs. The color degradation is greater vertically than horizontally. The UHDA-P3 (CIExy) coverage was around 76%, which means there is no wide color gamut.

The ANSI contrast ratio was around 5000: 1, which is very good for an LCD TV. This means the Philips 43PUS7805’s picture will not disappoint in a home theater (dark room) environment. In the factory setting of Cinema mode, the TV does not lose dark details, but the mid and light tones are too bright, which distorts the picture contrast. Note that the Philips 7805 does not have a local dimming option.

This low score indicates that correct playback of HDR content is not the main benefit of the Philips 43PUS7805 TV. In other words, this Philips is no different from many competitors in this price range. And more suited for SDR content rather than HDR content. Although both HDR10 + and Dolby Vision are supported.

The PUS7805 is equipped with 2 x 10W oval full-range speakers located at the bottom of the cabinet. The speakers and bass-reflex holes (bass reflexes) are directed downward. The speaker dampers are surprisingly thick (for TV drivers), suggesting that they can be biased above average and therefore better and stronger bass.

And indeed it is. For a TV of this class, the bass is really great. The mids and highs are no longer as good (they mostly suffer from speaker placement), but overall it sounds good. Supports Dolby Atmos technology at the “I will not refuse to reproduce” level. For the best soundtrack for movies, of course, it’s better to get a soundbar.

The 43PUS7805 TV is powered by the Saphi system, which has lower hardware requirements than Android. Therefore Philips installs it in its cheaper models. This system usually works relatively well. It has a wide variety of applications including YouTube, Netflix, etc. Unfortunately, we won’t find apps like Spotify, Tidal or HBO GO in it.

Philips Smart TV can be controlled by voice commands. The built-in Alexa feature will help with this. She can switch channels, select signal sources, control smart home gadgets. Streaming services are easily streamed through Google devices. There’s no Chromecast, but mirroring your smartphone screen to a large TV screen is supported. Saphi TVs (from 2019-2020) do not have a Bluetooth connection. So the sound is output to the headphones only through the wires. The 7805 plays a variety of different video file formats from USB and network drives, including avi, mkv, mp4, mov, tp, but no flv and wmv.

It is also worth noting that one of the unique advantages of the Philips PUS7805 is the ability to play video files without scaling. This is a real treat for purists and those who want to see content as it is.

On board PUS7805 there are three HDMI connectors and 2 USB connectors. There is a dual-band Wi-Fi module and a regular wired internet connector. Sound is output digitally through the optical audio output. There are two sockets for connecting satellite and terrestrial antennas. All HDMIs are equipped with an ARC return channel and support HDCP 2.3. In addition, there is a common interface slot and a service connector.

This is a large screen TV at an affordable price. Its other advantages are rich blacks, high contrast and smooth motion. The color rendition of skin tones is not the best side of this model, but professional calibration can correct the situation. Otherwise, this is a decent entry-level TV.