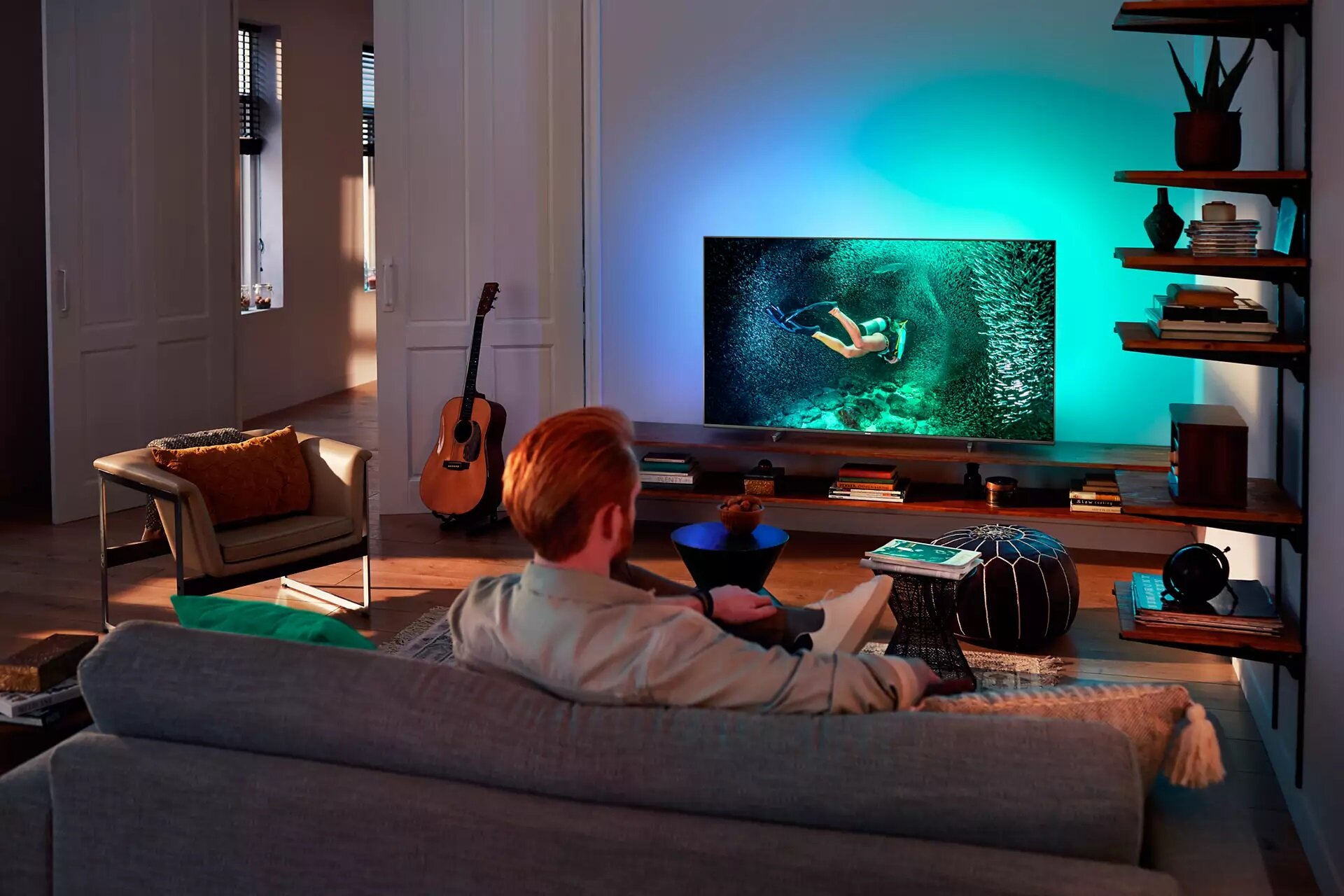 In 2021, the Philips electronics group will ship a new series of PUS7956 models with their own Ambilight, SmartTV, voice control and triple tuner. It also has some technologies that entry-level 4K TVs usually don’t have. The PUS7956 TV series consists of five models with diagonals from 43 to 70 inches. In the following Philips 55PUS7956 review using a 55-inch TV as an example, we’ll look at the strengths and weaknesses of the PUS7956 series to see if it’s worth buying.

Visually, Philips 55PUS7956 / 60 gives the impression of a modern TV. Its design is pretty minimalistic. The two metal legs are quick to install. Wall mounting doesn’t take much time either. However, to hang the TV on the wall, you need to purchase a suitable VESA wall mount. It is advisable to assemble a 55-inch device together.

The Philips 55PUS7956 / 60 TV features side connections that are easily accessible even when mounted on a wall. This is a big advantage over some other TVs. Pre-programmed buttons for YouTube, Netflix and Amazon Prime Video are already built into the included remote control. 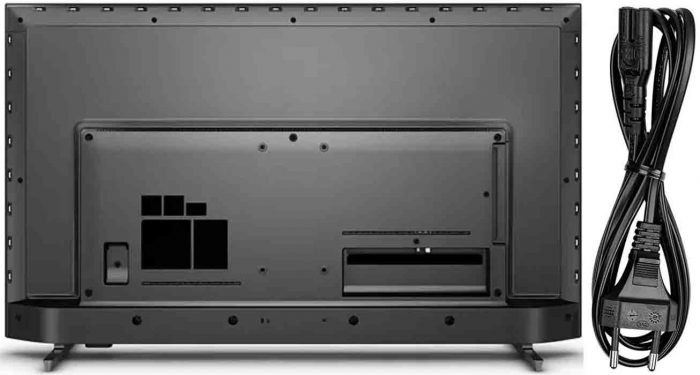 Philips is also well equipped with SmartTV. The interface runs on the current Android 10 operating system and is more responsive than the previous version of Android 9. Extensive media libraries and streaming services such as Amazon Prime Video, Netflix or Disney + are already preinstalled from the factory.

They now have a very good range of high definition content. Unfortunately, entering and searching in the SmartTV interface is quite cumbersome. To make things a lot easier, you should have an additional Bluetooth keyboard with touchpad. In this case, SmartTV can be controlled almost like on a PC. Voice control, of course, is also there. 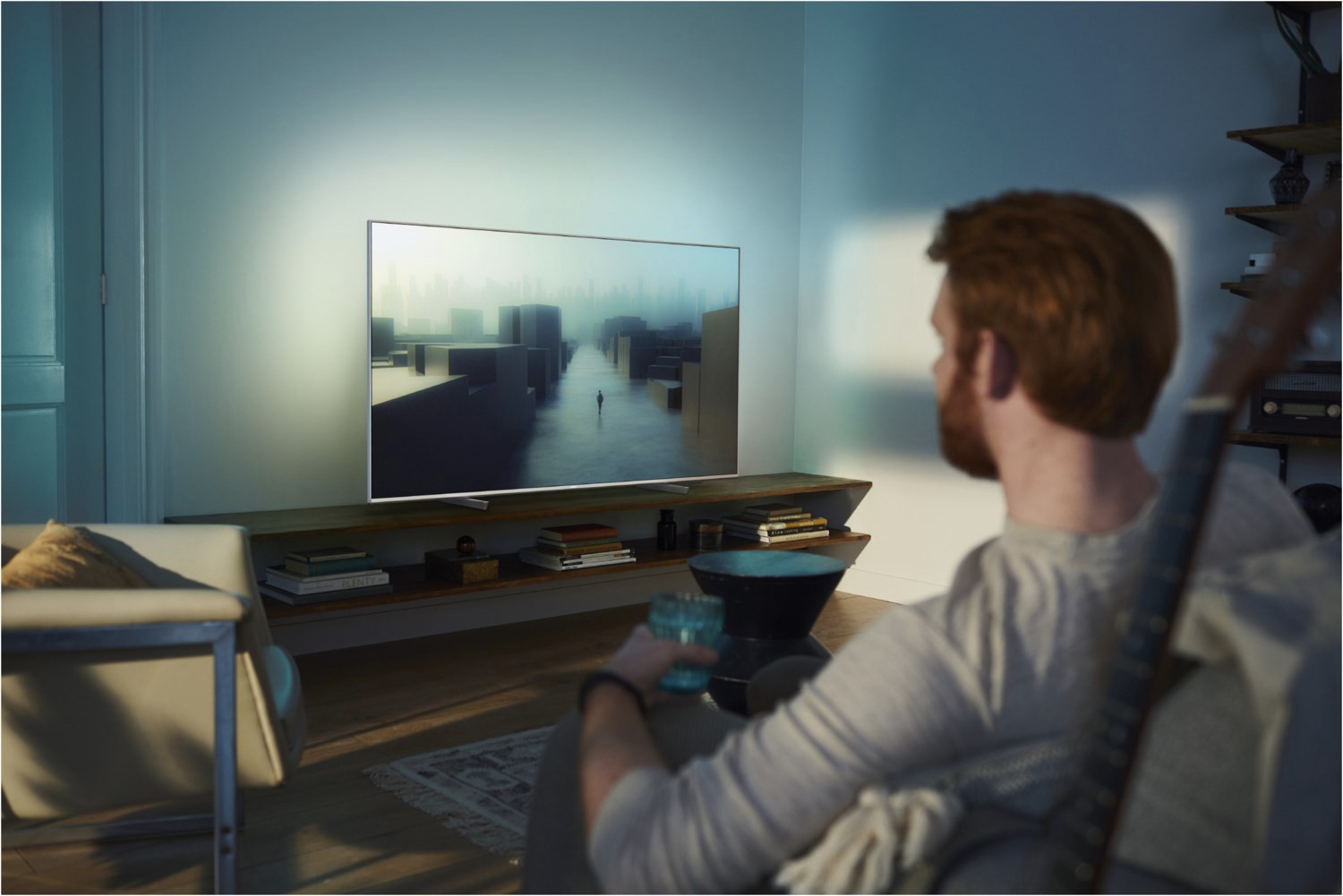 By default, when you turn on voice commands, Google Assistant is turned on. Philips PUS7956 TVs are equipped with a triple tuner for receiving TV programs. The receiver responds quickly to input signals. It takes him a little less than 2 seconds to change the TV channel. TV programs can be recorded, but only to a suitable USB stick. Overall, the equipment is very impressive relative to this price point.

The sound system of the Philips TV is sufficient for everyday TV viewing. However, the 2.0 sound circuitry with a total output of 20 watts has never been particularly impressive. The sound lacks the necessary power, especially in the low frequency ranges. The Philips PUS7956 55 ″ TV supports Dolby Atmos object-based sound .

However, the TV cannot fully realize it with the built-in speaker system. But there is no point in abandoning Philips 55PUS7956 for this reason alone. To get the full range of Dolby Atmos sound on a modern flat screen TV, you need a suitable soundbar or multi-channel sound system

If you turn to soundbars from the same manufacturer, then Philips offers a suitable Philips B8405 soundbar. Featuring 2.1- channel Dolby Atmos and 240W, this system is wireless and provides the power you need to watch blockbusters and music programs. 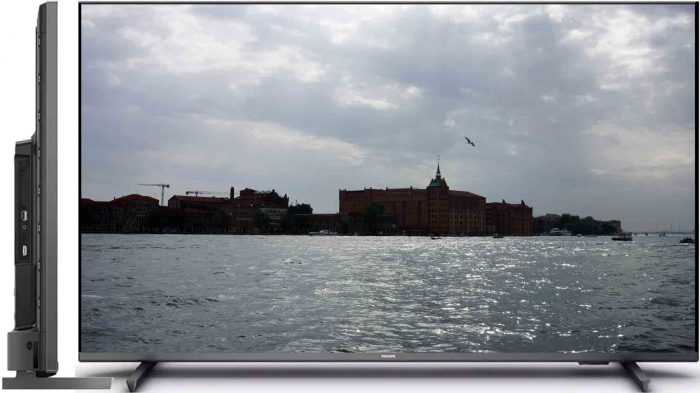 As before, Philips TVs in the new model range demonstrate a very good result in terms of image quality. These are vibrant colors, good contrast, and a great depth of field. Supports Multi-HDR, that is, HDR10, HLG, HDR10 + and Dolby Vision, which increase the contrast range and depth effect to an even higher level thanks to the increased peak brightness.

However, this very peak brightness is at the 300 nits limit. In this regard, it cannot be said that such content will look much better in HDR standard. This TV uses an IPS matrix. The VA matrix is only available in the 50 and 70 inch models.

Thanks to specially developed Ambilight, the colors of the edges of the picture are recognized beyond the perimeter of the screen. They are emitted in the form of a wonderful light effect. The result is a broader picture and a higher level of immersion. Built-in Pixel Precise Ultra HD image processor perfectly converts SD and HD content to UHD.

At this scaling, annoying artifacts or noise are not observed in the image. If we consider the picture quality of the Philips PUS7956, then it looks quite convincing, and the Ambilight technology adds that very cherry to the cake. 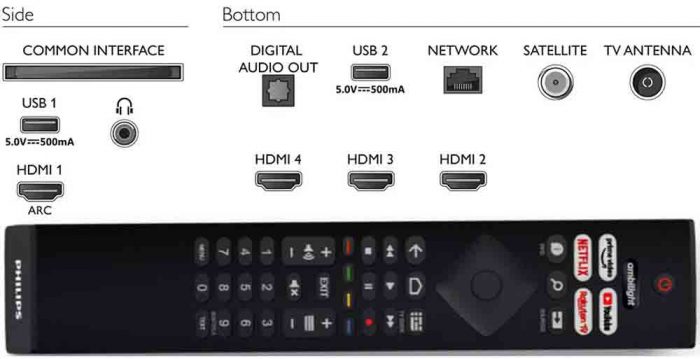 As for the commutation panel, here too there are connectors that have not been equipped with TVs in the entry-level 4K price category lately. So, for example, the TV has 4 HDMI 2.0 ports and two USB 2.0 ports, while many of its competitors have no more than three HDMI and one USB. HDMI 2.0 port number 1 has ARC audio return .

In addition, the TV has a 3.5 mm audio line-out for connecting headphones or a soundbar. The availability of other ports is the same as that of competitors. These are optical digital output, antenna input, LAN RJ45 line-in and CI + common interface for pay channels. Wireless connections include Wi-Fi and Bluetooth 5.0.

In conclusion of the PUS7956 review from Philips, it remains to add that this TV with exclusive Ambilight technology impresses not only with the flexibility of the ambient lighting, but also with quite good picture quality. The package with SmartTV, voice control and wide viewing angles is also worth considering.

Recommended for collective viewing in well-lit rooms. The installed sound system is sufficient for everyday use. To watch blockbusters and music programs, it is advisable to acquire additional equipment.

In preparing the article, materials from https://ultrahd.su/tv/philips/55pus7956-obzor.html were used. Visit article here.