The Samsung Crystal BU8000 is a TV in a series that, until recently, was a good low-cost alternative for those who couldn’t afford one of the higher end QLEDs. But with the introduction of the new Neo QLEDs, Samsung has had to push the 8 series even further down the performance ladder. As a result, these TVs have become almost the most economical line. 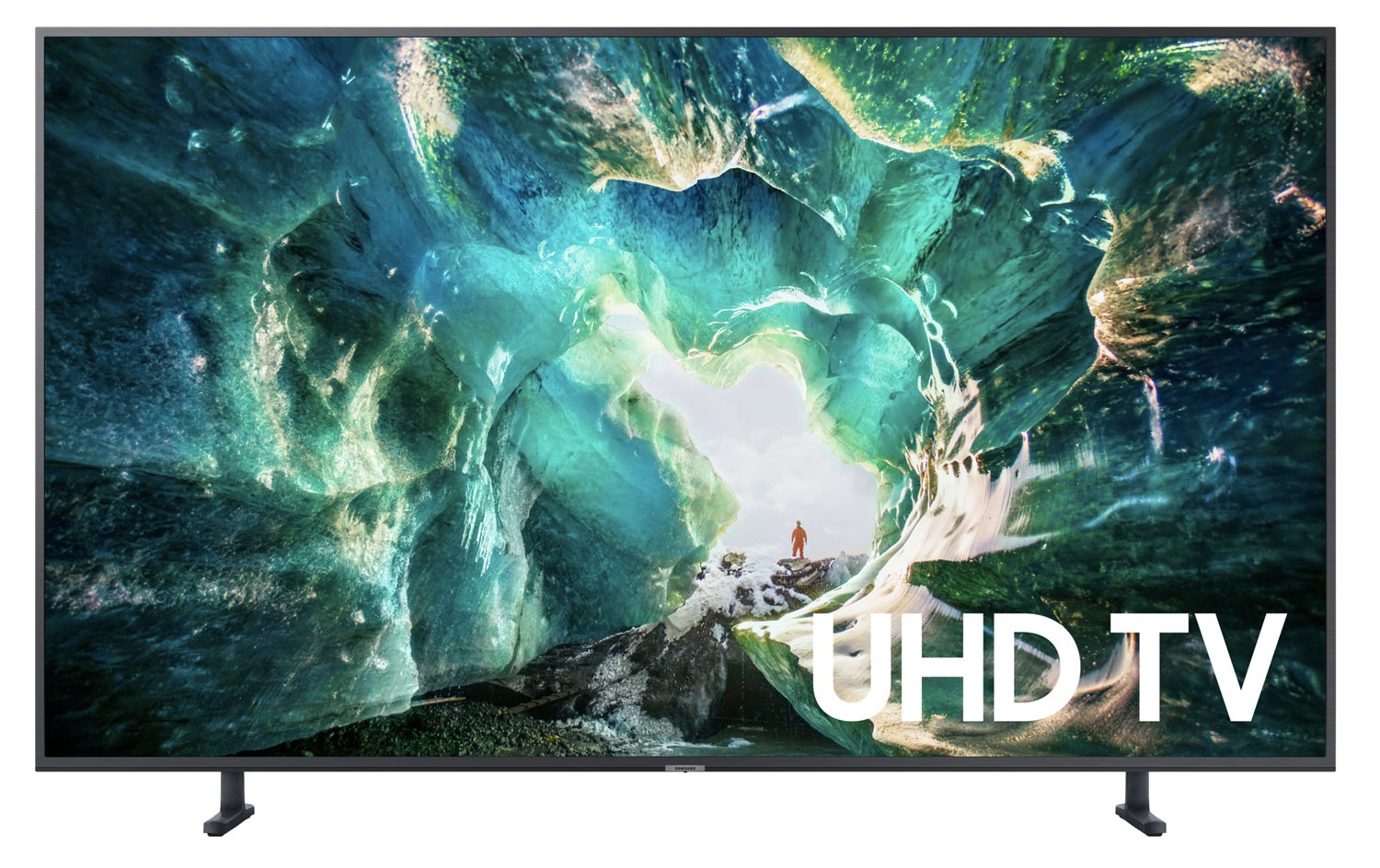 Although Samsung still offers its UHD TVs as the most affordable, the Crystal series is mainly aimed at those who are looking for a 4K TV but don’t have much demand for picture quality. There are two offerings in the Crystal series, and judging by the specs, they’re both pretty close to each other. In the Samsung UE55BU8000 4K HDR TV review, we’ll take a look at the TV’s capabilities.

The first thing that catches your eye in terms of design is how much the Samsung UE55BU8000 TV borrows the look of the Q60A 2021. We can say that these two models are almost identical, at least they have the same legs and have the same cable clips . Samsung is pushing its new AirSlim design, which makes the TV much thinner than the 2020 TU8000 .

Thus, the device is only 3 cm thick, making it exceptionally attractive when placed on the wall. The back panel of the UE55BU8000 TV also borrowed most of the design elements from the Q60B . The entire back surface is covered with matte textured plastic, as is usually the case with most Samsung models. At the same time, it seems that the niche for the connectors, along with the grooves for the cables, has moved a little higher. 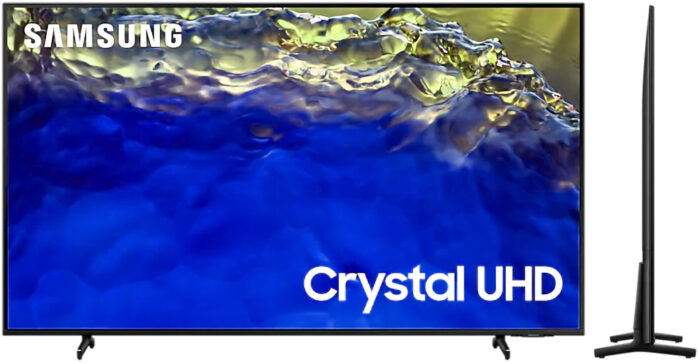 Everything else is standard, with a power connector on the right and VESA holes for wall mounting. The plastic legs are widely spaced and require wide furniture, but like the Samsung AU8000 , they can be adjusted in height. This means that the 55BU8000 TV can be raised if you have a soundbar and want to place it directly below the screen. In addition, for diagonals of 75″ and above, the distance between the legs can be adjusted.

There doesn’t seem to be any change at all in terms of processing power, as the new BU8000 TV shares the same chip as last year’s model. While specific details on the chip’s differences are not available, it’s clear that the Crystal 4K processor used lacks the AI ​​capabilities in both picture and sound that the Quantum processor in the QLED TV has.

In terms of image upscaling, the processor is still very efficient. From SD content and live content up to 720p, 1080p and 4K, the TV did not show any obvious artifacts from the upscaling process. But keep in mind that the end result is always very dependent on the quality of the original content.

All models in the Crystal series are based on Edge LED backlighting without local dimming. That is, the Samsung 55BU8000 TV uses LEDs, usually at the top and bottom of the panel, to illuminate the pixels on the screen. In the SDR brightness test in a 10% white window, the Samsung BU8000 TV shows a value of 300 nits. And in HDR in the same window, the peak brightness is 315 nits, which is actually below average, and in most cases the TV will look dull.

The Samsung BU8000 comes with a VA panel that doesn’t look good from an angle. The 4K QLED series also used VA panels, resulting in poor viewing angles, but in these, Samsung included two variations of the same technology, called Ultra Viewing Angle and Wide Viewing Angle, to address the issue somewhat.

Unfortunately, the Crystal series does not have these technologies, and therefore it has a very narrow field in which it can maintain image integrity at an acceptable level. We would say that 25 … 30° is the maximum that the device can offer. If you plan to use the TV for family viewing, then it is better to test it before buying.

In terms of HDR, we get the simplest HDR10 required for 4K UHD playback. There is HLG, which is used primarily for broadcasting, along with the newer HDR10+, the most advanced HDR protocol that uses dynamic metadata. Samsung continues to ditch Dolby Vision, HDR10+’s main competitor, and that’s another shortcoming of the Samsung BU8000 TV.

The color gamut of the BU8000 series is bound to be lower than the higher end QLED and Neo QLED. The measurements show 82% coverage in the DCI-P3 color space, while in the wider Rec.2020 we get only 60% coverage, which is very small. In other words, it cannot be assumed that the TV supports a wide color gamut.

The 55BU8000 has very similar features and overall performance to the AU8000. That is, a panel with a refresh rate of 60Hz is used along with a backlight strobe rate of 480Hz. This high frequency ensures that it will be completely invisible to the naked eye.

But keep in mind that different picture modes and settings can significantly reduce this frequency (even up to 120 Hz), and this flickering may already be noticeable to some people. The BU8000 also has motion interpolation with more or less good results. When there are no very busy action scenes, the interpolation works well, although some artifacts are sometimes noticeable.

But it is also noticeable that when the screen is extremely saturated with movement, the TV completely stops interpolating. Unfortunately, the BU8000, like its predecessor, does not support any sort of variable refresh rate (VRR) like FreeSync or HDMI Forum VRR. There’s also no G-Sync support , so if you’re looking for something like that, you might want to check out the more expensive QLED.

There is ALLM – automatic delay reduction mode. Note that with Game Mode enabled, the output latency (input lag) is 11ms. As always, this is an average between 1080p and 4K resolutions, so expect very similar performance regardless of the resolution you play at.

The Samsung BU8000 series comes with the latest Samsung Tizen but seems to pack a bit less features compared to some of the other 2022 Samsung TVs. Tizen 6.5 introduces new ways to interact with multiple devices. Now you can connect more devices and create smart services on them. 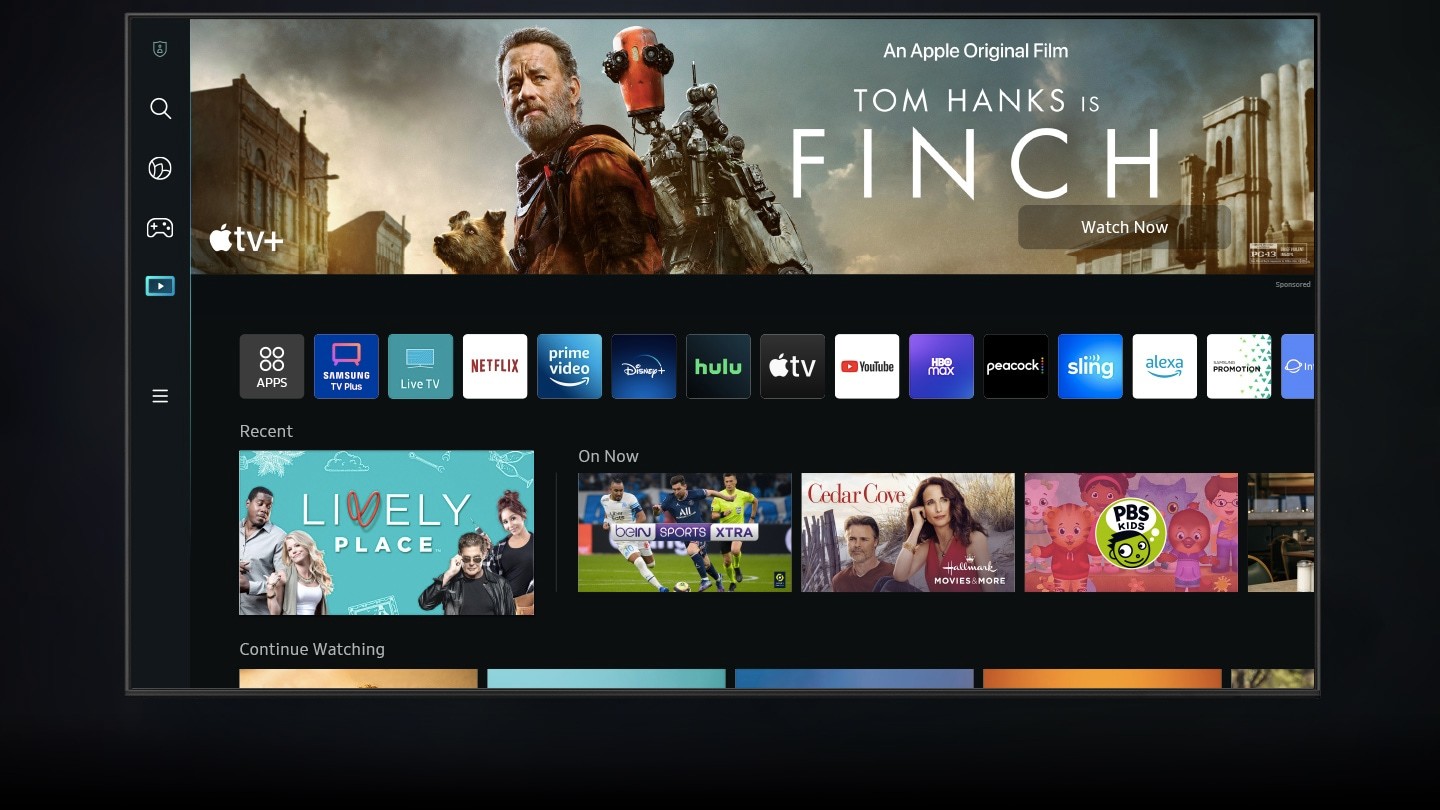 The Samsung 8000 TV supports voice control. Samsung is really trying to push its own Bixby service, but you have Amazon Alexa or Google Assistant to choose from.

The overall layout of the OS hasn’t changed much. Personalization has expanded as with so much content available, it becomes increasingly difficult to navigate through apps and services, especially if you use many of them at the same time. Tizen offers many customization options, all of which can be changed to your liking.

The Samsung 8000 TV supports voice control. Samsung is really trying to push its own Bixby service, but you have Amazon Alexa or Google Assistant to choose from. Although, if you’re an Apple apologist, don’t be disappointed, there’s also AirPlay support, and through that you can use Siri for voice commands. 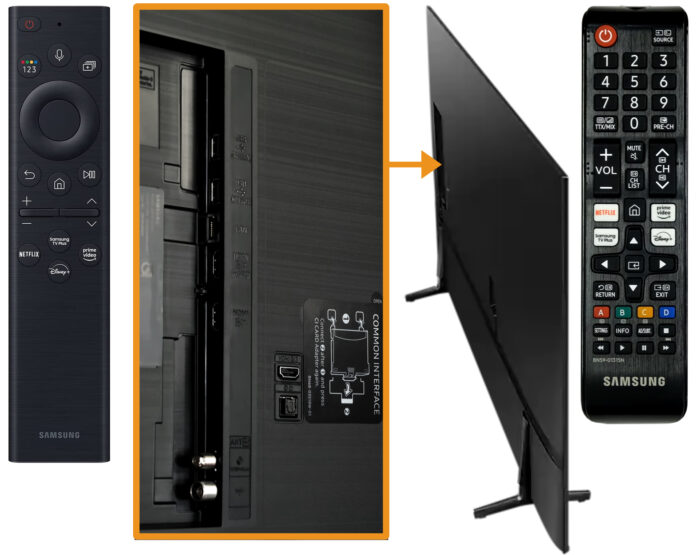 The Solar Remote is exactly the same as in all Samsung 2022 TVs. In some countries, in addition to the TM2280E solar cell remote, the regular TM1240A is also added. The layout of the buttons on them remained the same as in 2021. The main feature of the “solar” remote control is the presence of a microphone for voice control.

The audio system of the BU8000 TV is no different from the AU8000. It also doesn’t use a full OTS system. But “Object Tracking Sound Lite” is at least a little inferior to her. This uses a set of virtual speakers at the top parallel to two real speakers at the bottom. Obviously the result is different from real drivers. All in all, this is a 20W 2.0 channel system.

The TV supports Dolby Audio. Dolby Atmos can be streamed via the included eARC to any Dolby Atmos soundbar or dedicated sound system. This year, DTS support is again completely absent, which is a pity. There is Q-Symphony, a feature that can be enabled to pair your TV audio system with a matching soundbar.

Most of the ports on the Samsung UE55BU8000U TV face sideways, but there are a couple that face backwards. On the side we get 2 USB ports along with a pair of HDMI ports and an Ethernet port in between. In the lower part of this section there are also terrestrial and satellite antenna sockets (the number varies from one to three). Next to them, we get another HDMI port and a digital audio output that looks to the rear.

The Samsung BU8000 does not support the new HDMI 2.1 ports and instead uses older HDMI 2.0 ports. Also, the USB ports are from the older version 2.0. At least we’re getting eARC support , which allows you to send high-quality object-based audio to another device. In terms of wireless capabilities, the BU8000 comes with the usual built-in Wi-Fi as well as Bluetooth v5.2.

Overall, the samsung BU8000 offers everything you’d expect from an affordable TV. Many will be wondering whether to buy the BU8000 or last year’s AU8000, as the latter’s discounted price would be a better choice.

The differences between the two are small, but any improvement is welcome in this inexpensive category. The interface update adds convenience in terms of working with multiple connected devices, and this can serve as an impetus in making a purchase decision in favor of the TV.