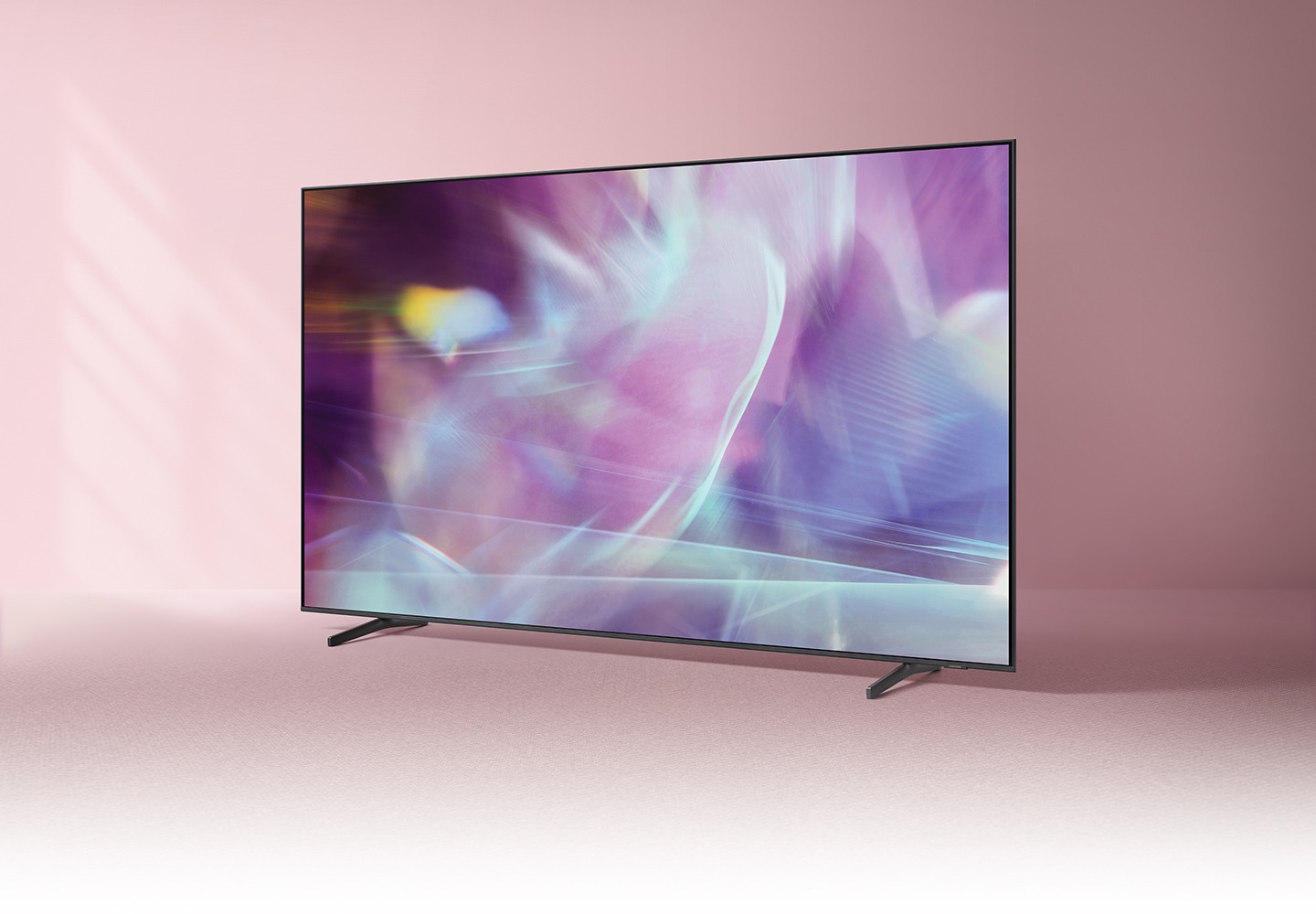 The Samsung Q67A QLED series is one of the smaller variants of the Samsung 2021 QLED TV line. This series replaces last year’s Samsung Q67T QLED variant. The new lineup is a twin brother to the Q60A this year. Let’s try to understand the Samsung QE55Q67A 4K HDR TV review, how it differs from the Samsung Q60A.

Samsung’s Q67A models have basically the same features as last year’s predecessor. These 4K TVs perform similarly, although there are some minor improvements. It’s about color gamut and gradient handling, but the newer models are worse in contrast ratio than the Samsung Q60T or Samsung Q67T .

Samsung’s Q67A series in question is an entry-level TV that sits at the bottom of the 2021 QLED lineup. Slightly higher in this hierarchy is the Samsung Q70A QLED series . It is assumed that the main competitors this year will be models from the Sony X80J and LG NANO80 series.

Despite the understated contrast, Samsung Q67A TVs are still capable of displaying deep blacks, which is an advantage when working in a darkened room. The QE55Q67A TV has low input lag, so gamers will love it.

However, the matrix refresh rate is limited to 50/60 Hz, there is no support for variable refresh rate technology, although the response time is fine. The next disadvantage is the lack of local dimming. Therefore, the series in question is not bright enough for a true cinematic experience in HDR mode.

Samsung Q67A TV series has a simple and minimal design. The appearance completely coincides with the TV discussed earlier in the Samsung Q60A review . The main and only difference between Q60A and Q67A is design. If the design of the Q60A is called “Air Slim”, then for the Q67A the manufacturer chose “Stylish Slim”.

The most notable change from last year’s variants is that these series are much thinner, making them suitable for wall mounting. The legs of the stand can be adjusted in height. Thus, you can raise the TV a little higher and place the soundbar under the screen.

The screen of the QE55Q67A TV is bordered by a plastic frame about 1 cm wide. The back part is also plastic with a matte horizontal texture. All inputs are to the side except for one HDMI port and digital optical audio output. For the installation of cable connections, there are special tracks and clamps on the legs of the delivery.

In profile, the overall thickness of the QE55Q67A is about 4 cm. The build quality is decent. The all-plastic body construction is not premium looking, but overall it is solid and there is no screen wobble. In the Samsung Q67A series, there are only three diagonal sizes – 43, 50 and 55 inches. As usual, most VA panels, and Samsung Q67A has just such a matrix, excellent contrast ratio. This means that this TV series can display deep blacks. However, it is worth mentioning that the new line is slightly inferior to the predecessor Q67T QLED – there is no local dimming function. And the improved black levels in the Q67A are not achieved.

The Q67A series has excellent peak brightness for SDR content. The TVs are almost identical to the Samsung Q60 / Q67 QLED and without any bezel shading in the 2% window. The consistency of the picture in different content is good. The image is bright enough and the models handle glare well in a well-lit room.

After calibrating in Movie picture mode with Warm 2 hue and gamma set to 2.2, brightness set to maximum (all other processing disabled), the SDR peak brightness reached 435 nits. Unfortunately, the Samsung QE55Q67A lacks local dimming, and the backlighting is done via Edge LED.

For a brighter image (but with a loss of fidelity), you can try setting the Picture Mode to Film, Color Tone to Standard, and Contrast to High. Then the peak brightness value can increase up to 450 nits.

In HDR mode, peak brightness is fine. As with SDR, the QE55Q67A maintains brightness correctly in various content without any frame dimming. However, as with the Samsung Q60 / Q67, there is not enough brightness to provide true HDR playback.

Peak brightness in HDR mode with Movie HDR picture settings at maximum contrast, maximum brightness and no processing turned out to be approximately 470 nits. In the 10% window, the maximum brightness was 510 nits with the Standard setting for the contrast enhanced picture mode (High setting).

Everything would be fine, but such settings lead to inaccuracies in the image. A few words about the “Game” mode and maximum brightness. In game mode at various settings, the peak brightness was in the range of 210..485 nits. The settings for optimizing the image in the game mode, we deliberately will not give – this is determined by personal perception. 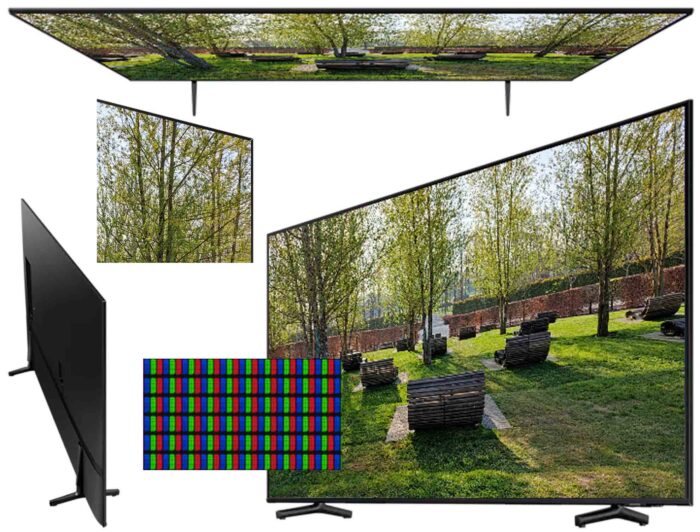 Of course, the viewing angles are lower than the nominal values, because the VA panel is installed and should not be compared with IPS or ADS . Images will appear washed out when viewed from the side, so the Q67A is not ideal for a wide seating area. If you need something with large viewing angles, then you should take a closer look at the Samsung Q80A QLED.

The response time of the Samsung 55Q67A is more or less okay. This isn’t great though, because fast-moving scenes can look a little blurry. There are also a lot of some dynamic scene artifacts in dark image environments.

Nevertheless, this figure is still better than last year’s Samsung Q60 / Q67 series. An alternative with better response time could be Samsung’s The Frame 2021 series. Pixel response times range from 7.2 to 17.3 ms.

Samsung’s Q67A series has an exceptionally low input lag. This metric provides an incredibly responsive gaming experience. In Game Mode, you can use motion interpolation to make games with lower fps smoother. True, this significantly increases the latency, and this mode should not be recommended to gamers. Before looking at the front-end, it’s worth looking at the support for HDR standards. The Q67A series has HDR10, HDR10 + and HLG. Dolby Vision is not supported. For a low-level QLED TV, the interfaces are optimal. There are three HDMI and a pair of USB 2 available. Sound is output only through the physical optical port, there is no 3.5 mm headphone output. External communication via Ethernet port or Wi-Fi and Bluetooth 5.2. DVB-T2 and satellite tuners are combined.

The built-in 2.0CH sound system is mediocre. The 2x10W speakers are reasonably well balanced, but there is no extended bass and no deep bass. In principle, the overall volume is sufficient for large or noisy companies. But at higher volume levels, there will be many sound system artifacts. As usual, the manufacturer recommends using an optional soundbar.

Samsung Q67A series is equipped with Tizen 6.0 simplified OS. The TV works in a similar way to the Samsung Q67T. However, the new models still have a large number of features. The operating system behaves smoothly and responsively, better than its predecessor.

The Samsung Q67A series are generally normal 4K TVs. The Samsung QE55Q67A provides a good picture in a bright room and is suitable for watching TV or sporting events. However, it has rather narrow viewing angles, which is due to the VA matrix.

Samsung TV QE55Q67A has a sufficiently low input lag for those who like to play through the console, as well as for use as a PC monitor. However, the native 60Hz sensor frequency and somewhat slow pixel response time in the absence of VRR support may disappoint some.

Unfortunately, while the QE55Q67A has an excellent contrast ratio and excellent color gamut, the models in this series do not have local dimming. Vivid images and true quality in HDR will not work. Here you should pay attention to higher end TVs before buying.

Cons
No 1440p support.
Viewing angles are below nominal.

Panasonic TX-50GX830E Review: Gets you closer to true cinema experience