The Samsung Q77A also handles motion blur and shake quite well, and also lacks the distracting soap opera effect. As a QLED TV, the Samsung 65Q77A does an excellent job of reproducing accurate colors.

This series of models, in particular, can serve as a fast and responsive gaming monitor for both game consoles and PCs. In this Samsung QE65Q77A QLED 4K HDR review, we’ll take a look at the strengths and weaknesses of the Q77A series, and how it differs from the Q70A .

The Samsung 65Q77AAU TV has an overall attractive ultra-thin screen. For added elegance, there is a thin black plastic bezel around the edge of the screen. Stylish Slim design is the main and, perhaps, the only difference between Q77A and Q70A. Sand Black “Narrow Neck Plate” plastic is located under the center of the screen.

This allows the TV to be placed on a smaller range of table or cabinet sizes than the commonly used edge legs today. The power cable connects to the back of the screen. To keep the flat cables out of sight, the rounded plastic backing has ducts for routing them.

The inlet connections are located in a recess with a notch to the right of the screen. Due to the ‘Stylish Slim’ design used in the Samsung Q77A TVs, they will look very nice on the wall.

Like all 2021 Samsung 4K UHD / HDR TVs, the Q77A series supports HDR10, HLG and the new HDR10 + Adaptive High Dynamic Range. Samsung devices do not support Dolby Vision , although its HDR10 + technology provides almost the same level of performance. The newer HDR10 + Adaptive system in these standards further adapts these brightness and contrast settings for the best appearance relative to the lighting conditions in the viewing room. 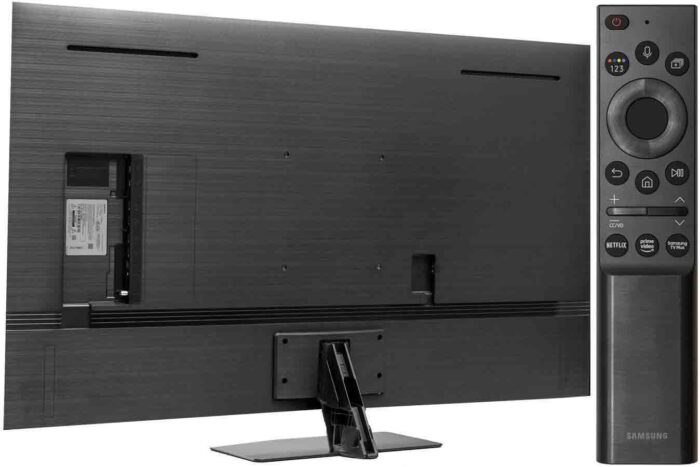 Samsung includes its excellent Tizen 6.0 OS, offering many of the most popular streaming apps. It also has a collection of Samsung TV Plus, which mainly contains ad-supported free news, movie and TV show channels. The platform includes SmartThings support for device management.

The TV has extensive support for voice control systems, including: its own Bixby, Google Assistant, Amazon Alexa and Apple AirPlay 2 . Viewers can stream content from their mobile devices and, using mobile apps, control the TV when the remote control is not at hand.

The set also includes Samsung’s popular Ambient mode for broadcasting images and photos on the screen. The kit has recently added a Multi View mode that can display multiple input sources on a single screen. Users can also stream directly from PC or Mac. It is also possible to access Microsoft 365 cloud services through a TV.

Despite its Dual LED backlighting, the Samsung Q77A has a far from outstanding ability to control shadow detail in dark areas of the screen. There are some content issues in the uniformity of the black screen. This appears as a white-on-black blur effect on the screen. The problem sometimes appears in the background of vivid real images.

Grayscale images on the screen have relatively good uniformity with minimal dirty screen effect and only slight blurring along the far edges of the screen. Colors when viewed perpendicularly hold up well. However, there are no excellent ultra-wide angle filters added by the company to the more expensive Neo QLED series models .

There is a noticeable loss of contrast and color shift when viewing the screen from angles of several steps to the left or right of the center point. The same can be said for viewing the image at high or low angles. For example, when standing up from a sitting position with the center of the screen at eye level.

If you are planning to mount the TV on a wall in a room where people tend to view the image from different angles, then this fact is worth keeping in mind. Overall contrast appears slightly washed out, especially in bright areas of the screen when viewing SDR content. Studio content such as news bulletins, sitcoms and the like tend to have a lot more contrast.

Overall, the contrast of the Q77A is much better than many competitors at the same price point. The Samsung Neo QLED series of TVs with full-size miniLEDs with local dimming technology and self-emitting screen panel technologies such as OLED TVs do not have these issues. However, they are much more expensive.

When viewing HDR content, the peak brightness in a 10% white window is approximately 630 nits. This is well below the 1,000-nit threshold required for a “premium 4K UHD TV” as defined by the Ultra HD Multi-Industry Alliance.

On the other hand, this is almost enough to view HDR content almost losslessly in a dark room. In other words, the picture characteristics provided by the QE65Q77A are better suited for viewing in dark rooms than in well-lit rooms, which tend to wash out contrast and add glare to the screen. Samsung 65Q77A sounds good and nothing more. The sound is about what you’d expect from a mid-range 4K UHD TV with a built-in 20-watt speaker system. The sound is slightly compressed, without expressive deep bass.

However, the dialogues sound clear and understandable against the background of sound effects and music. Anyone who really appreciates sound quality is advised to consider adding a good quality soundbar or surround speaker.

The 65Q77A TV is a very good display for video games. The HDMI 4 input in the suite supports many of the new HDMI 2.1 features , including Variable Refresh Rate (VRR), FreeSync Premium, and Auto Low Latency Mode (ALLM). Input lag is within 11.9ms at 1080 / 60p.

The new Game Bar, available in Game Mode in 2021, offers a pop-up message at the bottom of the screen. It shows the status of key display variables for game optimization, such as the current frame rate of the connected device and the availability of features such as VRR or HDR. By looking at the current metrics, users can quickly tweak the game mode settings for maximum performance. 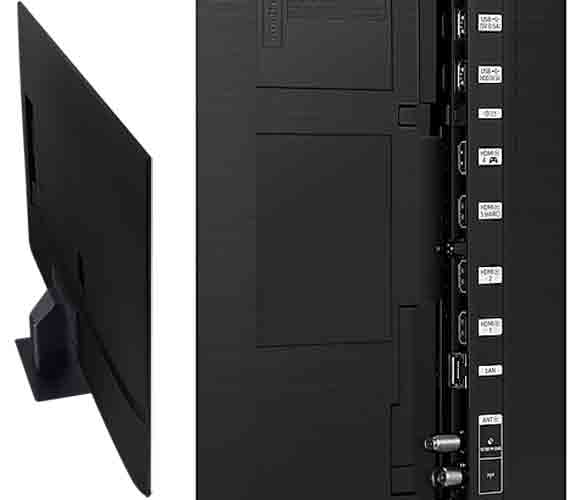 In conclusion of Samsung’s Q77A review, it should be added that the series in question is an excellent choice for those looking for a very good all-round smart TV with a decently colorful 4K UHD image at a reasonable price.

It has all the tools and more to satisfy the advanced gamer, and live movie and TV presentations should be enough for most buyers. For those looking for the best 4K UHD / HDR picture and sound, the Samsung QN “Neo QLED” QN80A or QN90A grades are probably worth checking out .