The Samsung QE55QN85A QLED TV is a mid-range 4K model from Samsung’s flagship Neo QLED line, which launched in 2021. Neo QLEDs differ from standard QLED mini LED backlighting. The series is placed just below the Samsung QN90A QLED and differs from Samsung’s previous flagship TVs in that it uses an ADS panel that is very similar to IPS .

The main competitors are LG QNED TVs with Mini LED backlighting . In this Samsung QE55QN85A Neo QLED 4K HDR review, using a 55 screen TV as an example, we will consider the pros and cons of the 2021 QN85A series.

Samsung QN85A looks like all modern TVs and nothing more. The stand looks a little primitive. The TV has thin bezels around the perimeter of the screen (0.9 cm). By design, the TV should look good in any room. Samsung QN85A has a very slim profile. The maximum thickness is 2.7 cm.

This value is subtler than most TVs and is a good choice if you want to wall-mount your TV. For the 55th diagonal, a VESA 200 x 200 wall mount bracket is suitable. The back is plastic with a textured brushed metal finish. There are grooves along the back and a cable management hole in the stand.

The stand is a mixture of plastic and metal. It is centered and does not look too wide. Therefore, it is possible to place the TV on a smaller table to save space.

In SDR mode, the TV is exceptionally bright. It peaks at 1125 nits in a white 10% window. This is more than enough to overcome glare in most lighting conditions, although it may be slightly visible depending on the content. In HDR mode, the maximum brightness reaches 1250 nits.

This value can be obtained in the “Movie HDR” mode, when the image with brightness and contrast is at the maximum. The local dimming is set to “High” and the hue to “Warm-2”. All advanced image processing settings are disabled. In other words, the overall brightness leaves nothing to be desired for different content.

If you want to make HDR even brighter, then you should set the Contrast Enhancer to “High”, and for ST.2084 – the maximum value. In Game Mode, HDR brightness isn’t as good as when watching video, but it’s still excellent.

There is simply a lot more difference between different content, as TV darkens scenes with very small and very large areas of brightness. The highlights still stand out, but the dark areas of the scene look a little brighter than they should. 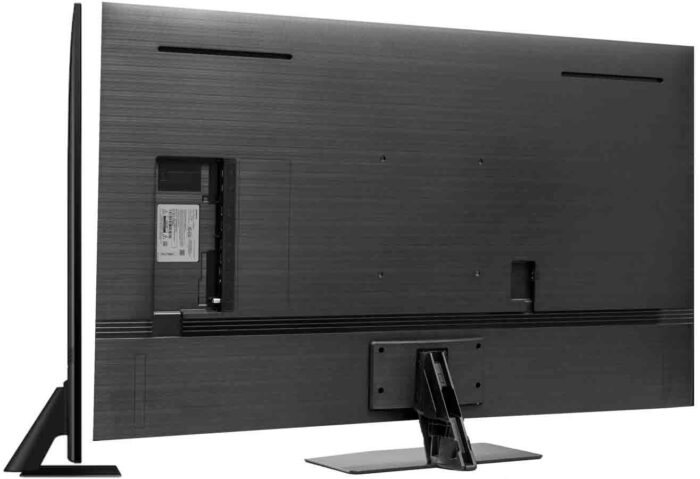 The original contrast ratio in Samsung QN85A TVs is ok, but it can vary depending on the device. The contrast ratio of this model is noticeably worse than that of many QLED TVs, because it uses an ADS panel instead of a VA panel. The panel’s native contrast is 1370: 1.

It is likely that the 85-inch and other variants of this TV use a VA panel with a higher contrast ratio. It is also possible that Samsung can replace these matrices with VA in six months. If the contrast in the TV is the most important parameter for you, then you should take a closer look at a similar TV with the Samsung QN90A Neo QLED VA panel . But before that, it’s worth noting that the QE55QN85A TV has a good local dimming function.

With local dimming enabled, the contrast approaches 2000: 1. That’s almost double the value of a regular IPS panel. Comparing the QN85A with the 2020 Q90T series, the model in question produces blacker colors. As a result, many small parts are crushed.

This is because the QN85A has more smaller dimmable zones than the Q90T, which has larger dimming zones. Transitions between zones, however, occur very quickly, with no visible halo of light behind moving objects.

In Game Mode, the local dimming score is roughly the same, albeit for different reasons. There is no significant black collision as with Game Mode off, but uniformity issues are more noticeable, and transitions between lighting zones are much slower, with visible halo behind bright moving objects.

The gray uniformity is decent, although it can vary depending on the content. The edges and corners of the screen appear slightly darker than the center. There is a dirty screen effect, but it shouldn’t be particularly noticeable. Evenness is better in dark scenes. The Samsung QE55QN85A’s black uniformity is mediocre.

It is much worse than previous QLEDs due to the ADS panel. Glow and haze are observed at the corners and edges. With local dimming turned on, uniformity is much better, but there is still noticeable discoloration around bright objects. Also note that black uniformity can vary depending on the content.

Samsung QN85A TVs have exceptional processing of reflections. Oddly enough, reflections do not look the same as on other LED TVs. Glare is more like reflections on typical OLED screens like the LG CX OLED. 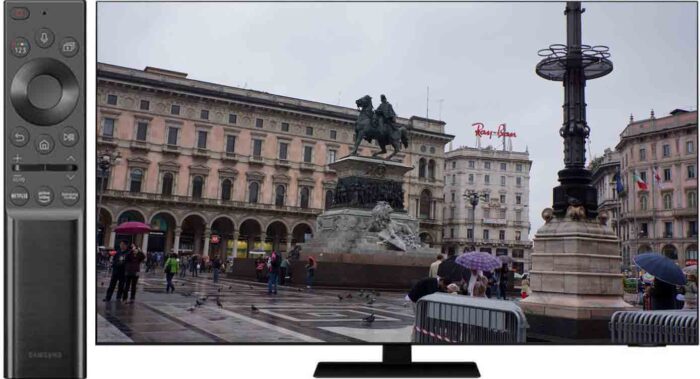 The color gamut is good, but the screen does not reproduce dark saturated colors very well due to the lower contrast. Samsung’s QE55QN85A TV features excellent response time with minimal motion blur for fast moving subjects. However, in darker scenes, you may notice some motion artifacts.

The frequency response of the QN85A is normal. The TV has a digital room correction function that can adjust the sound according to the acoustics of the room. The midrange sounds good, with clear dialogues. When the volume is close to the maximum, you can hear some deviations from the ideal sound.

However, the bass leaves a lot to be desired – with almost no punch. Distortion is somewhat disappointing. This is especially noticeable at medium to high volume levels. Although this is normal for TVs that do not have an enhanced sound system. It is also worth considering that distortion depends on the content, and not all users can hear it.

The remote control is similar to that used in high quality QLEDs like the Samsung Q900T 8K QLED. The remote has quick access buttons for streaming apps and a voice command button that enables the Bixby voice assistant.

The device can change input options and settings and search YouTube, but cannot search applications such as Netflix . Unlike most other remote controls, it does not use disposable batteries. Instead, the remote can be charged via USB-C or via the solar panel on the back.

Like the flagship models, the QN85A is equipped with an HDMI 2.1 port. The other three ports are HDMI 2.0. Also on the side panel there are two USB 2.0 interfaces, a TosLink digital optical audio output, an Ethernet RJ45 line-in, an antenna input and a CI + 1.4 slot for paid channels. There is no jack for connecting analog devices (RCA), as well as there is no line-out for connecting headphones.

Samsung QN85A (QE55QN85A) is perfect for watching movies. While its native contrast ratio is not bad, the image looks better with real-world content thanks to local dimming.

However, blooms are still noticeable, especially when viewed from an angle. On the other hand, the QN85A has no problem upscaling lower resolution content, and there is no jitter on this TV when watching 24p movies.