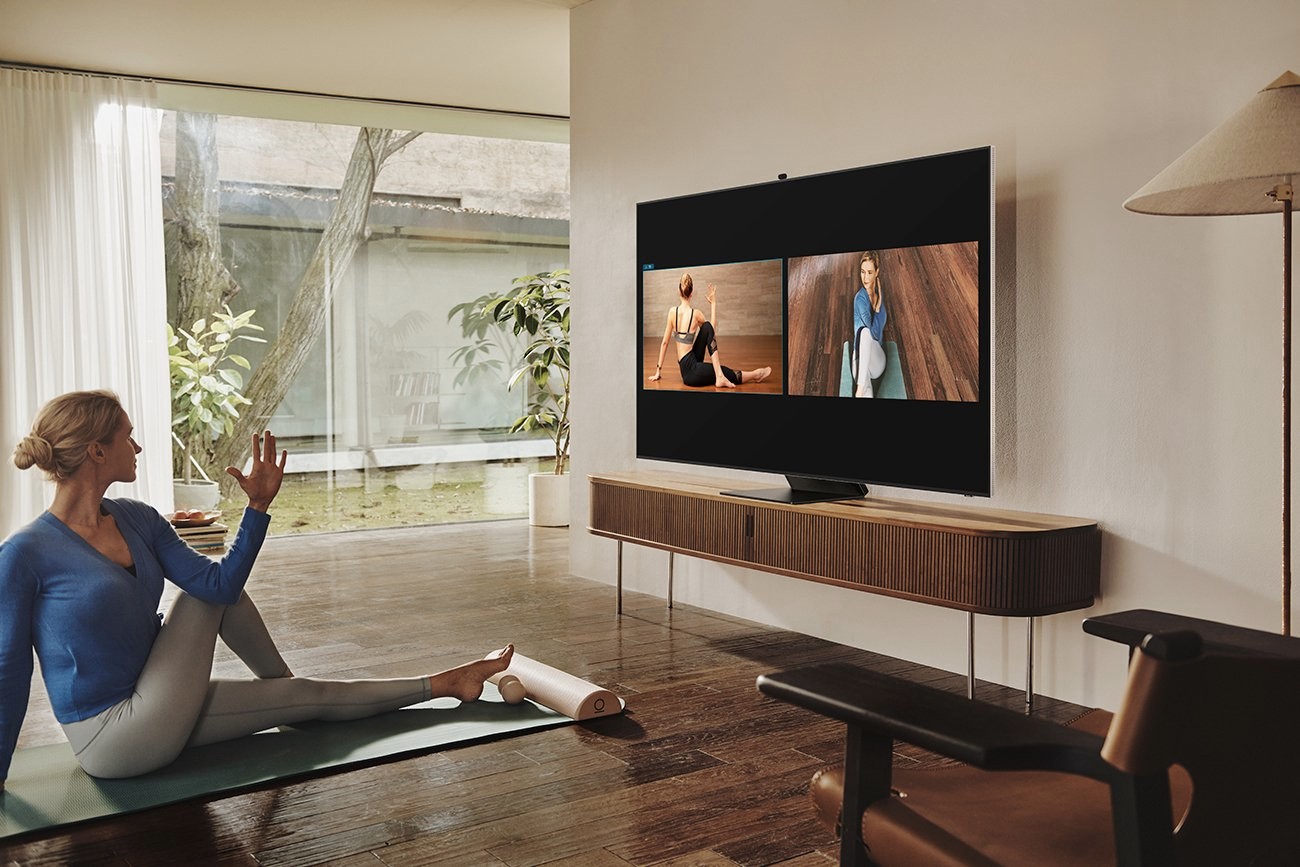 The Samsung QN85B from Samsung’s 2022 TV lineup is positioned as the successor to the QN85A. This line of Neo QLED TVs belongs to the entry level. The QN85B renders both blacks and highlights fairly well, providing decent on-screen contrast. The image has bright colors, clear contours and wide viewing angles.

The smart component of the QN85B series is based on the Tizen operating platform and is fully integrated with the smart functions of the next generation of game consoles. Yes, it’s not a perfect TV – there’s nothing special about its sound, SD content upscaling is unimpressive, and motion on the screen is sometimes blurry. But in the complex it shows more positive results than negative ones. In the Samsung QE55QN85B Neo QLED 4K HDR TV review, we will take a closer look at the functional features of the new product.

In terms of design, the Samsung QE55QN85B TV absolutely fits into the generally accepted trend. Its large screen rests on a single stand, leaving plenty of room at the bottom for a soundbar. The main difference in appearance from the QN85A is the shape of the legs and stand. The leg has become wider, and the stand has acquired a hexagonal shape and has an increased area. 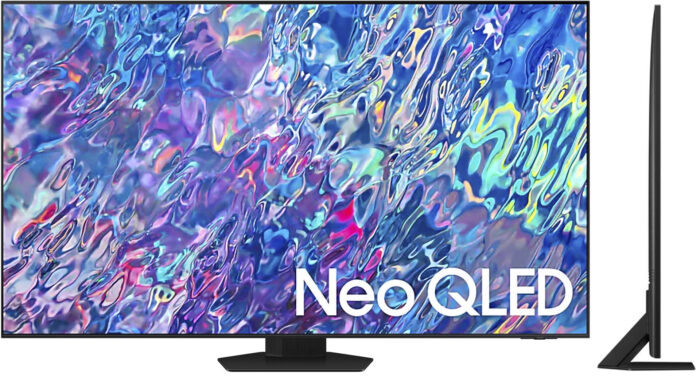 Set the QN85B among a host of new models from other manufacturers and you’ll have a hard time telling it apart. However, this is not bad – the TV should stand out with the image on the screen, and not with what this screen is clothed in. A thin black frame (silver in some locales) borders the huge screen area of ​​the 55-inch Samsung QN85B. With a thickness of 2.7 cm, the QN85B is well suited for wall mounting.

At first glance, the QN85B looks like another typical Samsung VA panel. However, it is not. The specification specifies ultra-wide viewing angles. This, coupled with a 1400:1 non-local dimming contrast ratio, confirms the use of an IPS panel. Specifically, in model 55QN85B – ADS matrices . But the local dimming feature boosts the contrast significantly, pushing it up to around 2000:1.

Thanks to the mini LED backlight with a large number of adjustment zones (a little over 500), the dimming control algorithm leads to a more accurate result. Moreover, in game or dynamic image mode, the perceived contrast is even higher. Backlight bleeding around bright objects against a dark background is almost imperceptible and increases slightly at an angle.

Samsung QN85B TV compatibility with HDR is traditional for the company. That is, HLG and HDR10 + are supported, Dolby Vision is not. Samsung can go on and on about all the reasons why its TVs don’t require Dolby Vision, but its absence will no doubt annoy some consumers, especially given the preference for this HDR format for both Netflix and Apple TV.

As a quantum dot TV, the Samsung QN85B also exhibits exceptional colors. The increased brightness (around 1500 nits peak) delivers the most saturated reds, greens and blues, and no matter the type of content, you can count on accurate color reproduction. Coverage of about 96% of the DCI-P3 (HDR) color gamut is quite acceptable. Nevertheless, lovers of real flowers can recommend Samsung QN90B .

Samsung equipped the QN85A with a 4K Neo Quantum processor with AI features. It is responsible for the formation of a three-dimensional depth image and for the operation of the user interface based on the Tizen OS. The latter can be controlled either using two remote controls, or using voice assistants, or using the Samsung Smart Things application.

One remote is a generic, cheap device with many buttons, many of which are too small, but with a wide range of functions. The other unit (SolarCell) is sleek, solar-powered, looks presentable, but is a bit limited in its capabilities. Voice control is via Google Assistant, Amazon Alexa, or Samsung’s own Bixby.

The one area the QN85B doesn’t excel in is motion control. Game content is often filled with fast and complex movements on the screen. Slight flickering of the edges is the most common occurrence, although ghosting and image duplication are so rare as to be negligible. 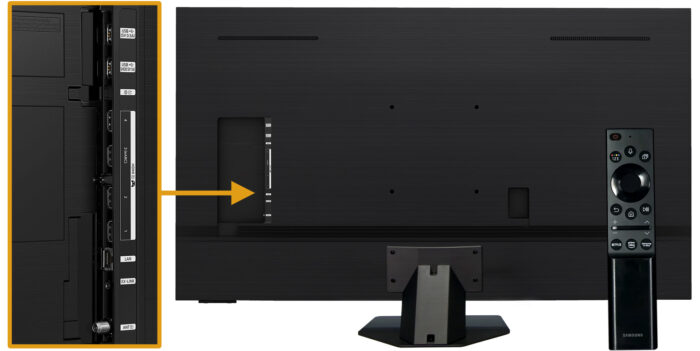 There’s also a low latency auto mode that, when enabled, automatically launches Game Mode when the QN85B detects a signal from the console. The updated game panel has the ability to select different settings presets for different games depending on the genre.

It’s not that Samsung didn’t try to fit the QN85B with a good audio system. Four full-size speakers with a total power of 60 watts work in a lightweight version of the Object Tracking Sound system. And yet the sound quality here is as far from picture quality as an Aston Martin is from karting. But the TV is never actively obnoxious or noisy, even at high volume.

The sound is soft, flat and kind of frameless. And this means that you will most likely have to invest in a soundbar. And be sure to pay special attention to Samsung’s Q Symphony line – they allow screen speakers to contribute to the overall sound, rather than being replaced by a soundbar.

There are four HDMI 2.1 inputs on the back of the Samsung QN85B Neo QLED. One of them supports eARC . Alternative inputs include a pair of USB connectors, an Ethernet input, and antenna jacks for a pair of built-in TV tuners. A digital optical output completes the range of physical inputs and outputs. Wireless connectivity works via Bluetooth 5.2 and dual-band Wi-Fi.

Its features are comparable to QN90B, but when it comes to brightness and color, it can’t compete. Especially considering the high level of black. If you’re not in the mood for a Samsung-branded TV, then other high-end options like the LG G2 can be explored. And yet Samsung QN85B is a very good TV. It is bright, colorful and has many new generation features. It has all the trappings of a second-tier luxury TV, but the low black depth holds back its consumer potential.

Advertisement
X
Subscribe to get the best Tech news and reviews of the week.
By signing up, you agree to our Privacy Notice and European users agree to the data transfer policy.
Close
04/14/2022