In late spring 2021, Samsung will launch its first Neo QLED mini LED-backlit LCD TVs. The list of innovations and improvements includes deeper blacks like OLED screens, increased peak brightness and a thin panel. What is remarkable about Samsung’s first implementation of “Neo QLED”? It marks the use of a Mini LED backlight design.

TCL will announce to the entire county that it has been selling mini LED TVs for two years now, and that’s true. But Mini LED’s status as a potentially new next-generation TV technology has undoubtedly been raised to a whole new level after Samsung and LG announced that they will also include Mini LEDs in their 2021 TVs. In the Samsung QE65QN90A TV 4K HDR review below, we will take a closer look at the functionality of the new series.

The QN90A series features an elegant NeoSlim design with a sandy black stand and titanium black bezel. The flex plate stand is the center support that screws down the center to the back of the TV cabinet. The stand allows only 6 cm of clearance between the top of the base plate and the bottom of the frame. This may cause some soundbars to slightly block the picture.

The base plate protrudes approximately 9.5 cm in front of the screen. The 65QN90A’s design features an ultra-thin bezel that surrounds all four sides of the screen. The thickness of the frame is slightly more than 6 mm. The back of the case is made of a pleasant-looking matte black textured plastic with a small convex arc starting from the edge of the bezel and extending to the middle of the screen. The significantly smaller thickness of the Mini LED backlighting has helped to reduce the overall thickness of the Samsung QN90A TV. Compared to last year’s Samsung Q90T, the thickness has decreased by more than 10mm. The remote control has retained its previous shape, but now it is enclosed in a plastic case. Plus, replacing the battery is a thing of the past: Samsung installs a battery and a solar panel on the back. The remote can also be charged via USB.

On the ultrahd.su portal, we briefly described the features of the new backlight technology. Recall that there is a Mini LED . The tiny LEDs that illuminate the LCD from the back have been scaled down to 1/40 the height of a conventional LED. This allows more individual pixel illumination points to be set with more local dimming zones.

Unfortunately, backlighting still cannot be controlled at the pixel level, as is the case with self-emitting display technologies such as OLED or MicroLED . This means that there will still be some blooming problems (halos) and slightly weaker overall contrast. But the number of dimming zones has been significantly increased (in this case, more than 700).

And this means getting more precise control over the dark elements of the image by almost completely turning off the corresponding backlight areas. The QN90A does an excellent job of producing near-pure blacks without distorting dark details in shadows. This is an important benefit for many gamers who need to see every nuance of the image.

The QN90A uses the Neo Quantum Processor 4K to support the new video processing pipeline. It uses up to 16 different models of massive neural networks. All are configured to provide intelligent deep learning upscaling.

The Neo Quantum processor can optimize the picture up to almost 4K at various quality levels of the original content. Native Full HD and 4K UHD sources offer clear, smooth images and smooth color transitions. Lower resolution content such as DVD looks as it would on a native HD screen without adding upscaling noise. In HDR content, the maximum brightness reaches 1600 nits, and when displaying small bright peaks of the picture, up to 1800 nits. In regular TV programs and movies, the Samsung QN90A delivers 345 nits of brightness. Those. the TV is bright enough to maintain image quality in bright daylight.

Another contributor to the incredible black levels on Samsung’s latest TV is its anti-glare screen, which really does great at suppressing ambient light reflections. Direct light sources can cause a dull “rainbow” effect in dark areas, but this is less distracting than normal bright reflections of reflected light.

The display quality of HDR content is not only subjectively impressive, but also shows how critical brightness is to HDR perception  . Moreover, the QN90A TV is capable of reproducing such rich blacks and details in dark tones along with its explosive brightness.

By combining very high brightness, excellent black levels and the use of quantum dots, the QN90A reproduces truly impressive colors over a huge range of “levels”. What’s more, the color subtlety is mesmerizing (perhaps in part due to the more subtle use of light made possible by the Mini LED).

Clarity and processing of motion

Meanwhile, the sharpness of the QN90A is also quite good. Thanks to Samsung’s efforts in the latest processing and panel structure, even native 4K sources appear sharper than they appear on most other 4K TVs. At least when using the Natural and Standard presets. And it should be noted that clarity is mostly achieved without unwanted side effects.

If you find the QN90A’s standard definition a little too aggressive, the Samsung QLED TV’s existing definition control offers a more granular level of control this year. And the Movie mode immediately softens the situation. The only aspect of the 65QN90A that doesn’t perform well out of the box is its motion handling. Auto-clarity makes the movement look too smooth, too soft. However, this can be corrected manually.

For many high-end TV buyers, gaming performance is now also a key part of the buying decision. Even though the QN90A TV only has one HDMI with 4K / 120p / VRR support, Samsung’s new 4K flagship delivers an amazing gaming experience. The detail and sharpness are so extreme that you might think you’ve hooked up an 8K console.

The TV perfectly handles all incoming 4K picture data at 120Hz. The almost complete absence of jitter allows you to see the picture with high definition and clarity. As usual, on Samsung TVs, the local dimming mechanism doesn’t seem to be as intense in game mode. This means that medium-dark scenes or locations that contain a complex mix of light and dark content may appear a little grayer.

There may also sometimes be a slight rectilinear lighting around bright objects in game mode. Although, oddly enough, this is more likely when bright objects appear on a grayish background than on a really black one. The output latency of the QN65QN90A is 9.2ms in the simplest game mode. And it increases to 14ms when Game Motion Pro is on, which adds smooth motion smoothing. 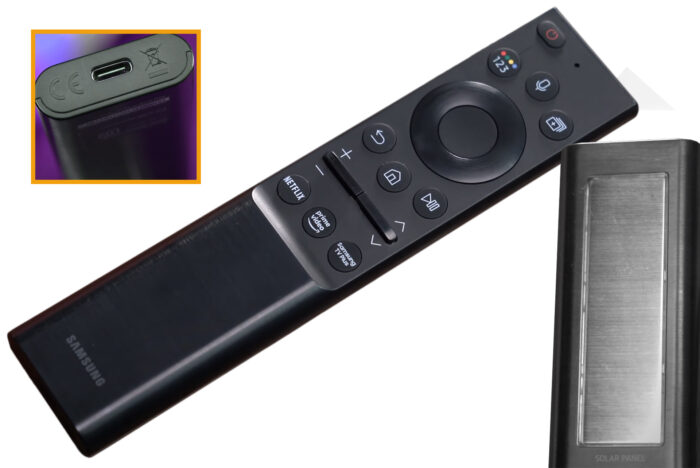 For the new generation of TVs, Samsung has also developed useful add-ons to expand the range of applications running on the Tizen operating system. Among them are the multi-view option, USB camera, Smart Things, Samsung DeX and a game bar. The MultiView option allows you to view on the screen up to 4 sources simultaneously.

The image from the USB camera can be displayed on the screen in front of the main one. This can be useful for various tutorial videos. The Smart Things app is still for integrating smart devices in the home. The new Game Bar clearly shows all important data such as current frame rate, VRR settings and more.

The 65QN90A sounds good or very good. With the default settings, the sound is clear and detailed. Details do not sound harsh or hiss, even if they contain a lot of high frequencies. The voices are clear, convincing, and well contextualized compared to the rest of the mix.

The speaker system has a 4.2.2 configuration capable of reproducing sound from all sides of the TV, not just from the bottom. This enables Samsung to provide an OTS + object sound tracking system that is capable of placing sound details with greater precision. Therefore, it seems that they come from exactly the right area on the screen.

The QN65QN90A audio system can also plug into the Samsung Q-Symphony, where a Samsung soundbar connected through the TV’s HDMI ARC port is paired with its speakers in the TV. The audio system also has a decent amount of bass. Not as much as we are likely to hear from the Samsung 8K QN900A TV, which is equipped with many additional subwoofers. The Samsung QN90A offers four HDMI inputs on the back, and only HDMI 4 input is a full HDMI 2.1 with support for high bandwidth up to 4K / 120 fps and the latest gaming features. Other advanced gaming features supported by this TV line include Variable Refresh Rate (VRR), FreeSync, low latency auto and high frame rate (# 4 only).

The new Samsung QN90A impresses with a solid array of technical improvements and new features. The picture quality is excellent. Thanks to the mini-LED technology, the picture is clearer and more voluminous.

The sound quality is also above average. This makes the QN90A one of the best LCD TVs out there, and with its new features and advanced technology, it holds great promise for the next generation of Samsung TVs.

Google Home Max is a thing of the past