To make prices even more affordable, the manufacturer had to exclude some technologies from the TU75 series and keep only the most basic ones. In the proposed review of Samsung UE55TU7500U 4K HDR, using the example of a 55-inch TV, we will try to identify the disadvantages and advantages of the Samsung TU7500 series.

Comparing this series to the QLED models, it can be argued that Samsung offers an extremely affordable home theater model. The Samsung UE55TU7500 comes in a fairly sturdy package weighing 20.9 kilograms. The complete set, in addition to the TV itself and its stand, includes a remote control with batteries, an instruction manual and a power cord.

If you’re buying a 55-inch model with no installation service, you could definitely use another person’s help to mount the center stand. In general, assembly does not require any special skills. The TV’s workmanship is impressive despite the fact that the model is in the lower price segment.

The case is not extremely thin as in the TU7170 series . The slim bezel, finished in gray titanium, gives the model a minimalist design. The TV is mounted on a center stand, which the manufacturer calls V-Type Center Low. This type of stand does not require a stand that is too long.

However, unlike a stand in the form of two V-shaped legs, the cabinet should be deeper. Should the need arise for wall mounting, the stand can be replaced with a suitable VESA 200 x 200 bracket (for a 55 screen diagonal). The supplied TM1240A is a standard digital remote control. Unfortunately, the universal remote control is only available for the more expensive models. Samsung uses Tizen 5.5 as its operating system with the new Smart Hub interface. The TV menus, as well as SmartTV features such as streaming services and media libraries, are surprisingly fluid and responsive.

Major streaming services such as Netflix , Disney + and Amazon Prime Video are pre-installed from the factory. They offer a significant amount of high quality HDR 4K content. Operation with the supplied remote control creates some inconvenience. It’s easier to purchase a Bluetooth wireless keyboard with touchpad, which is not included.

The manufacturer also did not forget about the functions of the smart home. With the SmartThings app, you can connect home appliances (such as a video intercom) and conveniently control them via your TV. You cannot control your Samsung TV using voice commands.

The UE55TU7500 is not equipped with Bixby, Amazon Alexa, Google Assistant voice assistants. The triple tuner is used to receive DVB-S (satellite), DVB-T2 HD (antenna) and DVB-C (cable connection). The switching time is just under 2 seconds. Also on board is HbbTV, Teletext and Electronic Program Guide (EPG). 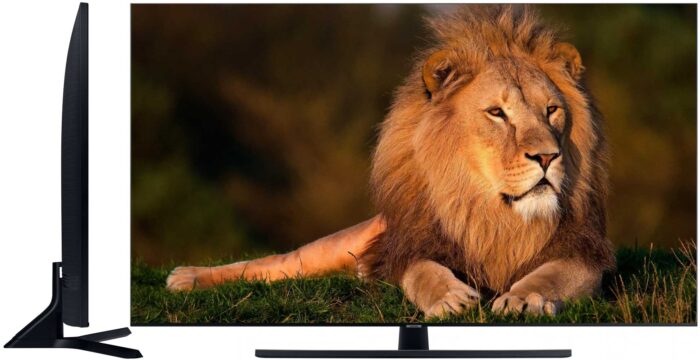 The Samsung UE55TU7500 features a 4K Ultra HD VA display with a 50Hz refresh rate and a new Crystal 4K image processor. When playing video content, a minimal “bleeding” of the backlight in the lower corners of the image is possible.

In general, the 55TU7500 displays a detailed and crisp picture with rich colors. Apparently due to its relatively inexpensive price, the black balance is far from perfect. However, the playback quality is satisfactory. The Crystal 4K image processor renders fast movements fairly evenly.

When scaling lower resolution (HD) content, the Crystal 4K processor does a great job. Artifacts and blurry edges cannot always be avoided when playing analog signals, and sometimes when playing SD content. Overall, the TU7500U series TVs convince with their picture quality for this price range.

The built-in 2.0-channel speaker system with a total power of 20 watts sounds good. When it comes to dialogues and documentaries, the reproduction of the voice is always clear and understandable. The problem of surround sound immediately manifests itself when watching music programs and modern films with multichannel sound.

For surround sound lovers, we usually recommend purchasing a soundbar. The Samsung HW-R450 Soundbar with a wireless active subwoofer and 200W power will noticeably improve the experience of watching movies. Plus, this sound system can be easily controlled with the TV’s remote control. The cheap price also touched the panel with connectors. In terms of connectivity, Samsung’s inexpensive TV offers a limited selection of switching ports. There is only one USB port and a pair of HDMI 2.0 (eARC) on the panel of the TV in question. Component (RCA) and composite inputs are missing.

There is also no line-out for connecting headphones. There are only optical audio output (TosLink), LAN RJ45 line input for connecting to the Internet, antenna input and CI + 1.4 for paid channels. There are also wireless connections via Bluetooth and WiFi. As you can see, only the most necessary remains.

In conclusion of the review of the TU7500 from Samsung, it is worth emphasizing that the series in question is equipped with only the most necessary equipment. The UE55TU7500 Ultra HD has everything you need to watch TV, enjoy SmartTV services and connect a suitable removable drive for home video viewing.

A mirroring function for displaying content from a smartphone on a TV screen is also available. 4K content is reproduced with good picture quality. Colors and depth of field are good. At the same time, you shouldn’t expect anything more from this device.