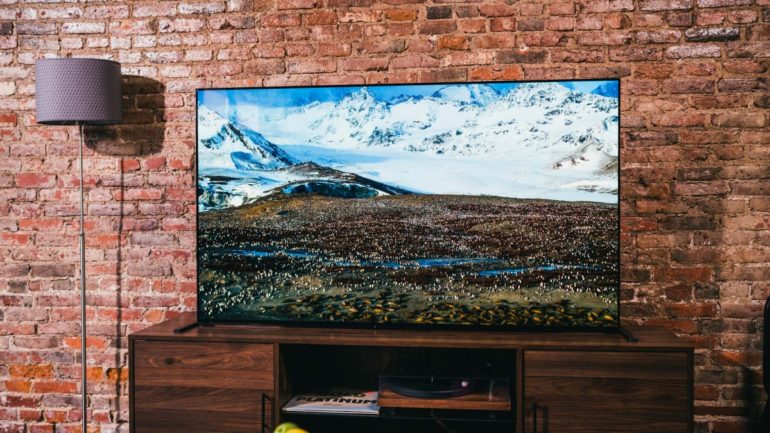 The Sony Bravia XR A90J TVs are part of the high quality Master series. This is the receiver of the 2020 Sony A9S OLED series, but the new series is available in larger sizes. Sony’s flagship 4K OLED 2021 sits above the Sony A80J OLED.

It competes with other high-end OLED screens like the LG G1 OLED and premium LED TVs like the Samsung QN90A QLED. In this review of the Sony XR-55A90J Bravia OLED 4K HDR, let’s try to figure out how bad or good this TV from the flagship A90J series is in relation to other premium TVs.

The Sony XR-55A90J TV is similar to other Sony high quality OLED displays. However, it has a new stand that offers more adjustment options. Its thin bezels (0.9 cm) and metal accents make it look elegant. This model is sure to impress any living room.

The stand can be installed in one of two ways: with flat feet, by pressing the TV against the table, or with raised feet to make room for the soundbar. There is also a third configuration in which the legs face inward to reduce footprint, but this is only available in the 83-inch version.

If you want to hang the TV on the wall, you can do it using the VESA 300 x 300 bracket. There are not many options in cable management, but in general, after laying the cables, you can not see it. The back of the panel is metal, while the rest is plastic with vertical protrusions.

The Sony 55A90J TV is pretty slim. The maximum thickness is 4.1 cm. Therefore, the model should look great on the wall. All entrances are located on the side. The build quality is excellent. TV seems incredibly durable. Overall, this is a very solid TV, as would be expected from such an expensive model.

The remote is similar to other Sony OLED remotes. The remote has shortcut buttons for major streaming apps, including YouTube, as well as a dedicated Google Assistant button that activates the voice command function.

You can use voice commands to change input, make certain settings, search apps, and more. The remote can also be used as a universal remote, although this may vary by country and device. In addition, the remote has a new backlight so the buttons can be seen in the dark. 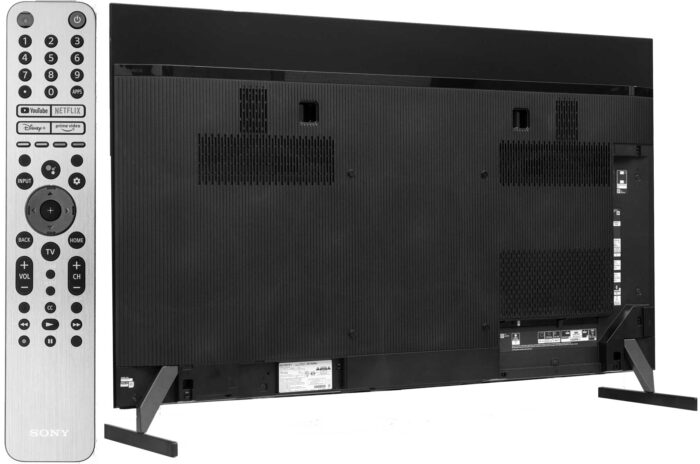 The Sony A90J has almost infinite contrast thanks to its OLED panel that can reproduce perfect blacks. Colors look deep and inky, especially in a dark room. Sony A90J TVs are ideal for watching movies.

Sony A90J Bravia has normal brightness in SDR mode. In real life scenes, the picture is a little dim compared to LED TVs. The Automatic Brightness Limiter (ABL) generally dims scenes with large areas of brightness. Therefore, brightness is not the most consistent across scenes.

Sony still supports HDR10, HLG and Dolby Vision. As with LG TVs, HDR10 + will have to be dispensed with. But again, this is a very small drawback as there is too little HDR10 plus content. The question that everyone is waiting for: “Has the brightness increased in the new Sony OLED TVs?”

If in SDR mode the peak brightness in the 10% window was slightly higher than 480 nits, then in HDR mode in the same 10% window the maximum brightness exceeds 800 nits. This is, in any case, much better than in previous OLED models from Sony, where brightness was often kept just below 700 nits.

These numbers are very close to the maximum brightness of the LG G1 TVs, but the Sony A90J scores slightly better. Notably, these values ​​are still lower than those of the Panasonic HZR2000 models . There, the maximum value actually reaches 1000 nits in the same 10% window. HDR brightness in game mode is very similar to HDR brightness outside of game mode.

When switching the mode, the brightness became slightly less than outside the “Game” mode. As with SDR, you can set HDR Tone Mapping to Preferred Brightness to get a slightly brighter image. However, there is an assumption that the result will be highly dependent on the content.

A90J series TVs have excellent gray uniformity. The screen as a whole looks very uniform with little or no dirty screen effect. Streaks and other problems were not noticeable in almost dark scenes. The Sony A90J has fantastic reflection processing. The TV is very good at scattering both direct and indirect reflections.

Therefore, glare should not be an issue, especially in more moderate lighting. Like all OLEDs, the Sony A90J uses WRGB sub-pixel layout, whereby all pixels are never turned on at the same time. The Sony XR-55A90J TV has an excellent color gamut. It is wide enough for HDR content and almost perfectly covers the commonly used DCI P3 color space

The Sony A90J can interpolate content at a lower frame rate up to 120fps for smoother motion. The function works great in slower scenes, but in more congested scenes or when panning shots, you will see a fair amount of artifacts.

The A90J has low input lag, although it is slightly higher than competing high-performance models. Outside the game mode, this value increases even more. In order to get low latency, you should use the Game or Traffic mode. However, in order to get the lowest latency for gaming, it is recommended to set it to “Game” mode.

The Sony A90J has nearly instant response times like all OLED displays. For the most part, the movement looks smooth, with very few artifacts. However, you can still notice persistent blur caused by the way our eyes track motion.

The Sony 55A90J TV is powered by the Google TV operating system, which replaces Android TV. Google TV OS is very similar to Android, but has several improvements. Firstly, the operating system is very smooth and quite easy to navigate, without errors or other problems.

It also simplifies everything by allowing you to log into all your frequently used applications from the Smart Hub. Unfortunately, there are ads in the app store and on the homepage that cannot be turned off. You can opt out of some of the proposed materials, but you cannot completely get rid of them.

In the Sony Bravia A90J, the actuators are equipped with two drivers, one for the high and one for the mid-range. Woofer modules are slightly larger than in 2021. The total power of 60W is enough to deliver reliable sound. A short test procedure allows you to adjust the sound according to the acoustics of the room.

The Acoustic Surface has a big advantage because the sound really comes straight from the screen, which contributes to the realism. With other TVs, it often feels like the sound comes more from under the TV. The A90J has a tight sound with well-defined voices, but sometimes the audio sounds a little harsh, especially when listening to music.

In this case, turn off the surround sound mode in the settings, which will improve the result. The A90J series supports Dolby Atmos . Surround sound is decent, although of course it remains somewhat limited. Those interested can use the XR-55A90J TV as a center speaker in their surround sound system. For this, the device is equipped with a speaker connector.

The Sony A90J series TV supports eARC , which allows you to transfer high quality audio formats to an external receiver via HDMI. To use this option, you must turn on eARC mode and then set Digital Audio Out to Auto 1 and Passthrough to Auto. Composite (RCA) connection requires an adapter that is not included.

Sony A90J is a great TV for mixed use. It delivers exceptional picture quality for movies and TV shows, while its near-instantaneous response time ensures smooth motion for sports and video games.

While not as bright as an LED TV, the A90J is bright enough to bring out most of the highlights in HDR mode, aided by its nearly infinite contrast ratio. Unfortunately, there is a risk of static burnout, although this shouldn’t be an issue if you’re watching a variety of content.

Pros
Nearly perfect black levels.
The image remains accurate at all viewing angles.
The movement looks exceptionally smooth.
Cons
Risk of static burn.
For some, the price may seem expensive.